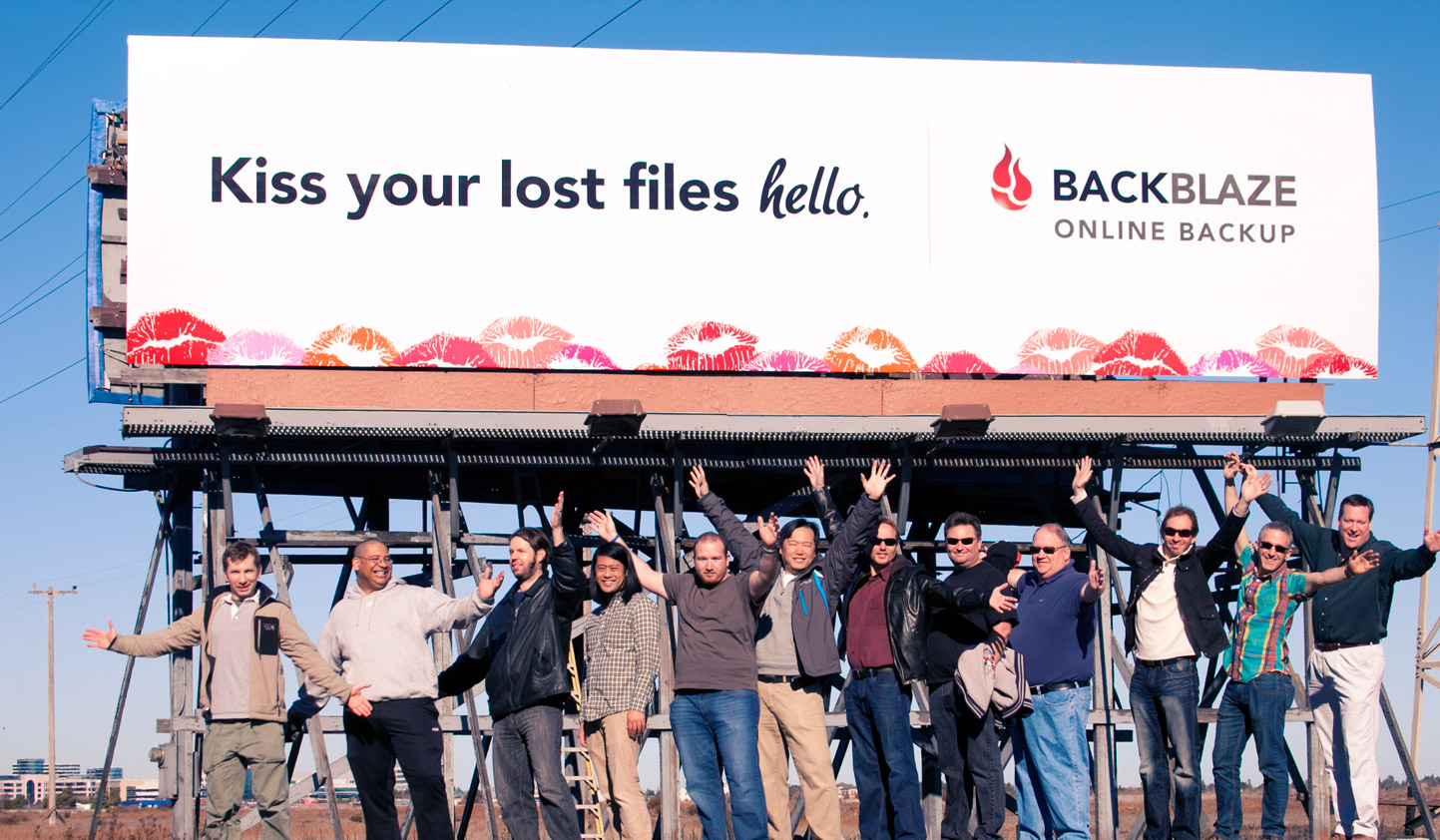 Backblaze will be celebrating its 12th year in business this coming April 20th. We’ve grown steadily over the years, and this year have reached $30 million ARR (annual recurring revenue). We’ve accomplished this with only $3.1 million in funding, having successfully bootstrapped the company with founder contributions and cash flow since the very beginning.

Last year our CEO and co-founder Gleb Budman wrote a series of posts on entrepreneurship that detailed our early years and some lessons learned that entrepreneurs can apply for themselves. Recently, Gleb did a follow-on webinar on BrightTALK covering many of the series’ main points. Given the time constraints most entrepreneurs face, I’ll highlight what I consider some of the key lessons for startups that Gleb outlined in both the entrepreneurial series and the webinar. 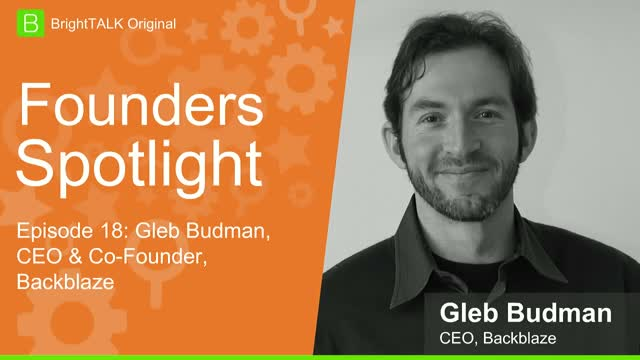 Gleb’s first article, How Backblaze Got Started: The Problem, The Solution, and the Stuff In-Between, starts with one of the most critical aspects for any successful company: defining the real problem you’re trying to solve. In Gleb’s words, “The entrepreneur builds things to solve problems — your own or someone else’s.”

So the question is how do you go about defining the problem? The most obvious place to start is to look at pain points you’re trying to address and then defining the specific elements that contribute to them. Can you solve the problem by taking away or changing one of those elements or multiple elements? Or, is it a matter of adding in new elements to shift away the pain points?

In our case, there was an obvious need in the market for backing up computers. There were already solutions on the market that, at least in theory, provided a backup solution, yet the majority of people still didn’t use one. The question was why?

Just because solutions exist doesn’t mean the problem is solved. After a series of deep dives into why people weren’t backing up, we discovered that the major problem was that backup solutions were too complicated for most people. They recognized they should be backing up, but weren’t willing to invest the time to learn how to use one of the existing services. So the problem Backblaze was originally solving wasn’t backup in general, it was taking away the learning curve to use a backup solution.

Once you have the problem clearly defined, you can proceed to design a solution that will solve it. Of course the solution itself will likely be defined by market forces, most notably, price. As Gleb touches on in the following video clip, pricing needs to be built into the solution from the outset.

Once you’ve determined the problem you want to solve, the next step is to create the infrastructure, i.e. the company, in order to build the solution. With that in mind, your primary goals for that first year should be: set up the company correctly, build and launch your minimal viable product, and most importantly, survive.

Setting up the company correctly is critical. A company is only as successful as the people in it. At all stages of growth, it’s critical that people have clear definitions of what is expected of them, but in the beginning it’s especially important to make sure people know what they need to do and the vision that’s driving the business.

From the start you need to determine the company, product, and development resources you need, define roles to be filled, and assign responsibilities once key players start joining your team. It’s very common in the early stages of a startup for everyone to be working on the same tasks in a democratic process. That might be good for morale in the beginning, but can result in a lack of focused direction. Leadership must emerge and help steer the company towards the shared vision. With clearly defined roles and responsibilities, team members can collaborate on achieving specific milestones, ensuring forward momentum.

A far less exciting but equally important foundation for a startup is the legal entity. It’s easy to get caught up in the excitement of building a product and put off the less exciting legal aspects until you are ready to launch. However, trying to retroactively get all the legal requirements in place is far more difficult.

Ownership (equity) ratios need be locked in near the start of the company. Having this hammered down can avoid a lot of potential infighting down the line. If you plan on raising money, you will need to incorporate and issue stock. You may also want to create a Proprietary Information and Inventions Assignment (PIIA) document, which states that what you are all working on is owned by the company.

Once the (admittedly not terribly exciting) legal aspects are taken care of, the focus truly shifts to building your minimal viable product (MVP) and launching it. It’s natural to want to build the perfect product, but in today’s market it’s better to focus on what you think are the most important features and launch. As Gleb writes in Surviving Your First Year, “Launching forces a scoping of the feature set to what’s critical, rallies the company around a goal, starts building awareness of your company and solution, and pushes forward the learning process.” Once you launch your MVP, you’ll start receiving feedback and then the iteration process can start: more on that later.

Lastly, when it comes to surviving your first year, always make an effort to conserve your cash. It might be tempting to scale as quickly as you can by hiring a lot more employees and building out your infrastructure, but minimizing your burn rate is usually more important for long term success. For example, Backblaze spent only $94k to build and launch its beta online backup service. If you scale your startup’s people and infrastructure too fast, you might have to rush to find more funding, which typically means more dilution and more outsiders telling you what you should be doing — not great when you’re first starting out and trying to achieve your vision.

Gleb goes into more detail in this video clip:

Getting Your First Customers

When you’re finally ready to go, you should target people who will give you lots of feedback as your first customers. Often, this means friends and even family members that are willing to give you their opinions on what you’re doing. It’s important to press the people close to you to give you honest feedback, as sugar-coating comments might actually lead you to make incorrect conclusions about your product.

Once you have a chance to evaluate the initial feedback and iterate on it, consider a private beta launch. Backblaze’s initial launch target was to get 1,000 people to use the service. In his article, How to Get Your First 1,000 Customers, Gleb goes into detail on how Backblaze successfully used PR outreach to achieve the beta launch goal.

One of the PR tactics used was to give publications, such as Techcrunch, ArsTechnica, and SimpleHelp, a limited number of beta invites. This not only raised awareness, but it gave early beta users a feeling of exclusivity, which helped in getting beta users to provide honest feedback.

Equally important is to have a system in place to collect contact information from everyone that expresses interest, even if you can’t service them at the time. You always want to be building your customer pipeline and having mechanisms in place to collect leads is important for sustained growth.

It’s unavoidable that every startup entrepreneur will have to face a number of unexpected lows that will supplant what seem as increasingly infrequent highs. Dealing with both is vital to sustain your business (and your mental health). Often times, what at first appears to be a low point can inspire actions that ultimately help drive your business to new highs.

In the following clip, Gleb gives several examples of seemingly low points that Backblaze was ultimately able to turn into wins, or as Gleb says “turning lemons into lemonade.” Note: I recently wrote a post about similar turnarounds on the social media front, Making Lemonade: The Importance of Social Media and Community.

It might not be foremost in your mind at the start, but from day one of your startup you are building your company culture. Culture is a little more nebulous than product design (maybe a lot more nebulous), but it is equally important in the long run. Culture affects every aspect of how your company operates because it has a day to day effect on every employee and the decisions they make, as Gleb points out in this short clip.

A prime example of how company culture affects your business is Backblaze’s emphasis on transparency. One of the first major wins for Backblaze was the release of our first Storage Pod design back in 2009. Most companies would keep proprietary design IP (intellectual property), like the Storage Pod, under lock and key, because they provide a major competitive pricing advantage. Yet the cultural importance of transparency led to a decision to open source the Storage Pod design despite the risk of competitors taking the designs and copying them. It also enabled us to answer a common question, “How can you provide this service at this low a price?” by writing one blog post with specifications, photos, and a parts inventory showing exactly how we do it.

The result of that very risky decision was a massive increase in brand awareness. Hundreds of articles were written about Backblaze comprised of not just general-interest and news articles, but also business case studies examining the rare business decision to be so transparent about our IP.

All of this attention ultimately positioned Backblaze as a thought leader in the cloud backup space (later, also in cloud storage), allowing us to be mentioned in the same articles and to compete against far bigger companies, including Amazon, Google, and Microsoft.

I hope you enjoyed this TL:DR version of Gleb’s entrepreneurial series and I would love to hear your thoughts in the comments section below. I highly encourage anyone involved in a startup to take the time to read the original series as time permits and watch the entire webinar on BrightTALK, Founders Spotlight: Gleb Budman, CEO, Backblaze.

Gleb Budman’s Series on Entrepreneurship on the Backblaze Blog: