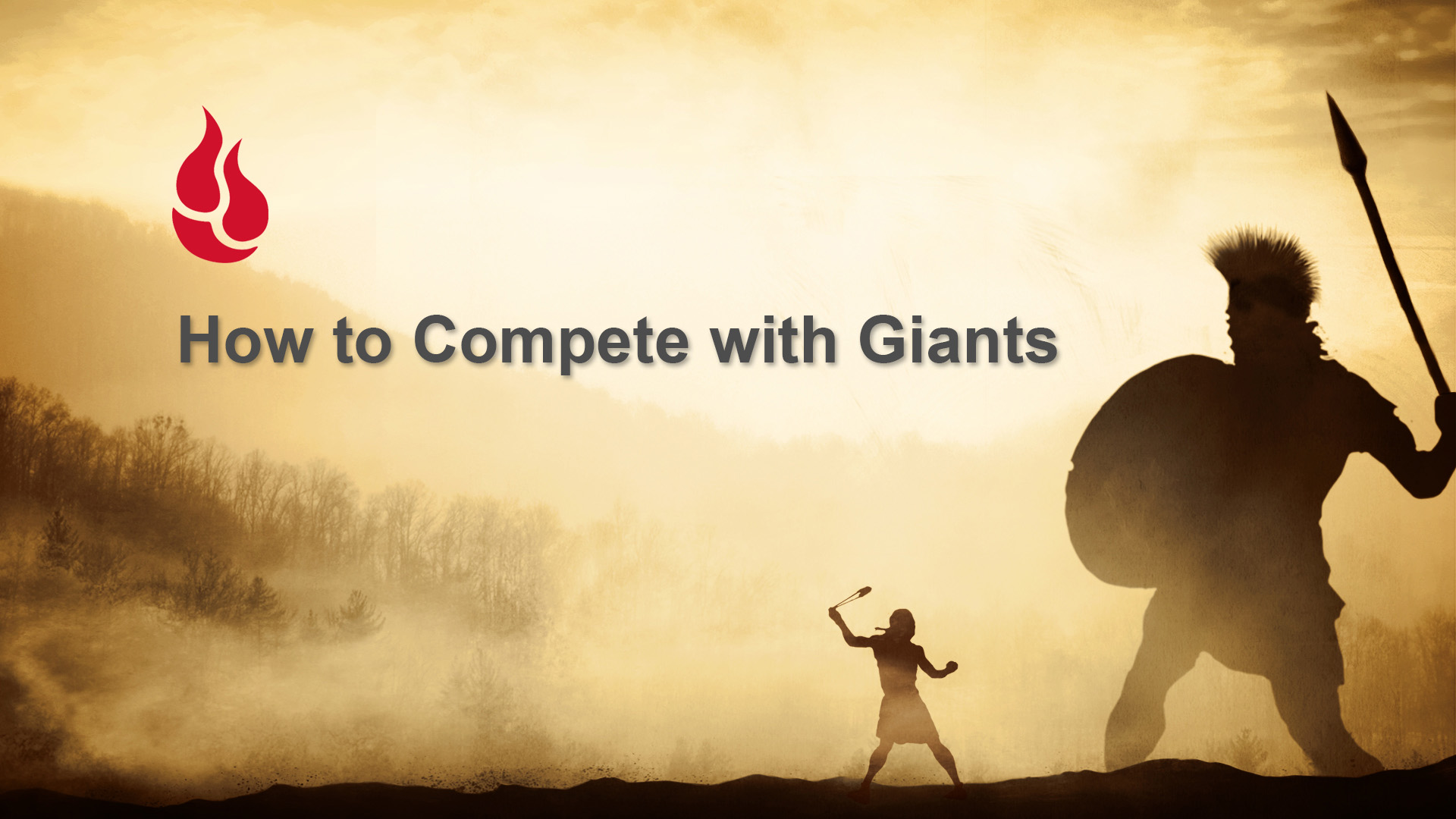 This post by Backblaze’s CEO and co-founder Gleb Budman is the sixth in a series about entrepreneurship. You can choose posts in the series from the list below:

Perhaps your business is competing in a brand new space free from established competitors. Most of us, though, start companies that compete with existing offerings from large, established companies. Your job is to come up with a better mousetrap — not the first mousetrap.

Competing with established companies that are orders of magnitude larger can be daunting. How can you succeed?

I’ll set the stage by offering a few sets of giants we compete with:

What did we learn by competing with these giants on a bootstrapped budget? Let’s take a look.

For a long time Apple considered Apple TV to be a hobby, not a real product worth focusing on, because it did not generate a billion in revenue. For a $10 billion per year revenue company, a new business that generates $50 million won’t move the needle and often isn’t worth putting focus on. However, for a startup, getting to $50 million in revenue can be the start of a wildly successful business.

The Advantages Startups Have

The giants have a lot of advantages: more money, people, scale, resources, access, etc. Following their playbook and attacking head-on means you’re simply outgunned. Common paths to failure are trying to build more features, enter more markets, outspend on marketing, and other similar approaches where scale and resources are the primary determinants of success.

But being a startup affords many advantages most giants would salivate over. As a nimble startup you can leverage those to succeed. Let’s breakdown nine competitive advantages we’ve used that you can too.

It’s hard to build a $10 billion revenue business doing just one thing, and most giants have a broad portfolio of businesses, numerous products for each, and targeting a variety of customer segments in multiple markets. That adds complexity and distributes management attention.

Startups get the benefit of having everyone in the company be extremely focused, often on a singular mission, product, customer segment, and market. While our competitors sell everything from advertising to Zantac, and are investing in groceries and shipping, Backblaze has focused exclusively on cloud storage. This means all of our best people (i.e. everyone) is focused on our cloud storage business. Where is all of your focus going?

Lesson Learned: Align everyone in your company to a singular focus to dramatically out-perform larger teams.

2. Use Lack-of-Scale as an Advantage

You may have heard Paul Graham say “Do things that don’t scale.” There are a host of things you can do specifically because you don’t have the same scale as the giants. Use that as an advantage.

When we look for data center space, we have more options than our largest competitors because there are simply more spaces available with room for 100 cabinets than for 1,000 cabinets. With some searching, we can find data center space that is better/cheaper.

When a flood in Thailand destroyed factories, causing the world’s supply of hard drives to plummet and prices to triple, we started drive farming. The giants certainly couldn’t. It was a bit crazy, but it let us keep prices unchanged for our customers.

Our Chief Cloud Officer, Tim, used to work at Adobe. Because of their size, any new product needed to always launch in a multitude of languages and in global markets. Once launched, they had scale. But getting any new product launched was incredibly challenging.

Lesson Learned: Use lack-of-scale to exploit opportunities that are closed to giants.

This one is probably obvious. If you’re going to provide the same product, at the same price, to the same customers — why do it? Remember that better does not always mean more features. Here’s one way we built a better product that didn’t require being a bigger company.

All online backup services required customers to choose what to include in their backup. We found that this was complicated for users since they often didn’t know what needed to be backed up. We flipped the model to back up everything and allow users to exclude if they wanted to, but it was not required. This reduced the number of features/options, while making it easier and better for the user.

This didn’t require the resources of a huge company; it just required understanding customers a bit deeper and thinking about the solution differently. Building a better product is the most classic startup competitive advantage.

Lesson Learned: Dig deep with your customers to understand and deliver a better mousetrap.

How can you provide better service? Use your advantages. Escalations from your customer care folks to engineering can go through fewer hoops. Fixing an issue and shipping can be quicker. Access to real answers on Twitter or Facebook can be more effective.

A strategic decision we made was to have all customer support people as full-time employees in our headquarters. This ensures they are in close contact to the whole company for feedback to quickly go both ways.

Having a smaller team and fewer layers enables faster internal communication, which increases customer happiness. And the option to do things that don’t scale — such as help a customer in a unique situation — can go a long way in building customer loyalty.

After determining that the industry standard EMC/NetApp/Dell storage servers would be too expensive to build our own cloud storage upon, we decided to build our own infrastructure. Many said we were crazy to compete with these multi-billion dollar companies and that it would be impossible to build a lower cost storage server. However, not only did it prove to not be impossible — it wasn’t even that hard.

One key trick? Remove the unnecessary. While EMC and others built servers to sell to other companies for a wide variety of use cases, Backblaze needed servers that only Backblaze would run, and for a single use case. As a result we could tailor the servers for our needs by removing redundancy from each server (since we would run redundant servers), and using lower-performance components (since we would get high-performance by running parallel servers).

What do your customers and use cases not need? This can trim costs and complexity while often improving the product for your use case.

How many times have you visited a large company website, particularly one that’s not consumer-focused, only to leave saying, “Huh? I don’t understand what you do.” Keeping your website clear, and your product and pricing simple, will dramatically increase conversion and customer satisfaction. If you’re able to make it 2x easier and thus increasing your conversion by 2x, you’ve just allowed yourself to spend ½ as much acquiring a customer.

Customers love easy — and being smaller makes easy easier to deliver. Use that as an advantage in your website, marketing materials, pricing, product, and in every other customer interaction.

Lesson Learned: Ease-of-use isn’t a slogan: it’s a competitive advantage. Treat it as seriously as any other feature of your product

Obviously unnecessary risks are unnecessary, and some risks aren’t worth taking. However, large companies that have given guidance to Wall Street with a $0.01 range on their earning-per-share are inherently going to be very risk-averse. Use risk-tolerance to open up opportunities, and adjust your tolerance level as you scale. In your first year, there are likely an infinite number of ways your business may vaporize; don’t be too worried about taking a risk that might have a 20% downside when the upside is hockey stick growth.

Using consumer-grade hard drives in our servers may have caused pain and suffering for us years down-the-line, but they were priced at approximately 50% of enterprise drives. Giants wouldn’t have considered the option. Turns out, the consumer drives performed great for us.

Lesson Learned: Use calculated risks as an advantage.

The larger a company grows, the more it wants to hide information. Some of this is driven by regulatory requirements as a public company. But most of this is cultural. Sharing something might cause a problem, so let’s not. All external communication is treated as a critical press release, with rounds and rounds of editing by multiple teams and approvals. However, customers are often desperate for information. Moreover, sharing information builds trust, understanding, and advocates.

I started blogging at Backblaze before we launched. When we blogged about our Storage Pod and open-sourced the design, many thought we were crazy to share this information. But it was transformative for us, establishing Backblaze as a tech thought leader in storage and giving people a sense of how we were able to provide our service at such a low cost.

Over the years we’ve developed a culture of being open internally and externally, on our blog and with the press, and in communities such as Hacker News and Reddit. Often we’ve been asked, “why would you share that!?” — but it’s the continual openness that builds trust. And that culture of openness is incredibly challenging for the giants.

As companies scale, typically a smaller percent of founders and executives interact with customers. The people who build the company become more hidden, the language feels “corporate,” and customers start to feel they’re interacting with the cliche “faceless, nameless corporation.” Use your humanity to your advantage. From day one the Backblaze About page listed all the founders, and my email address. While contacting us shouldn’t be the first path for a customer support question, I wanted it to be clear that we stand behind the service we offer; if we’re doing something wrong — I want to know it.

To scale it’s important to have processes and procedures, but sometimes a situation falls outside of a well-established process. While we want our employees to follow processes, they’re still encouraged to be human and “try to do the right thing.” How to you strike this balance? Simon Sinek gives a good talk about it: make your employees feel safe. If employees feel safe they’ll be human.

Lesson Learned: Being human is the ultimate antithesis to the faceless corporation.

Build Culture to Sustain Your Advantages at Scale

Tesla still comes across as human, with Elon Musk frequently interacting with people on Twitter. Apple continues to provide great service through their Genius Bar. And, worst case, if you lose these at scale, you’ll still have the other advantages of being a giant such as money, people, scale, resources, and access.

Of course, some new startup will be gunning for you with grand ambitions, so just be sure not to get complacent. ;)

Backblaze Release 5.1 – RMM Compatibility for Mass Deployments
Next Post: Backing Up Linux to Backblaze B2 with Duplicity and Restic