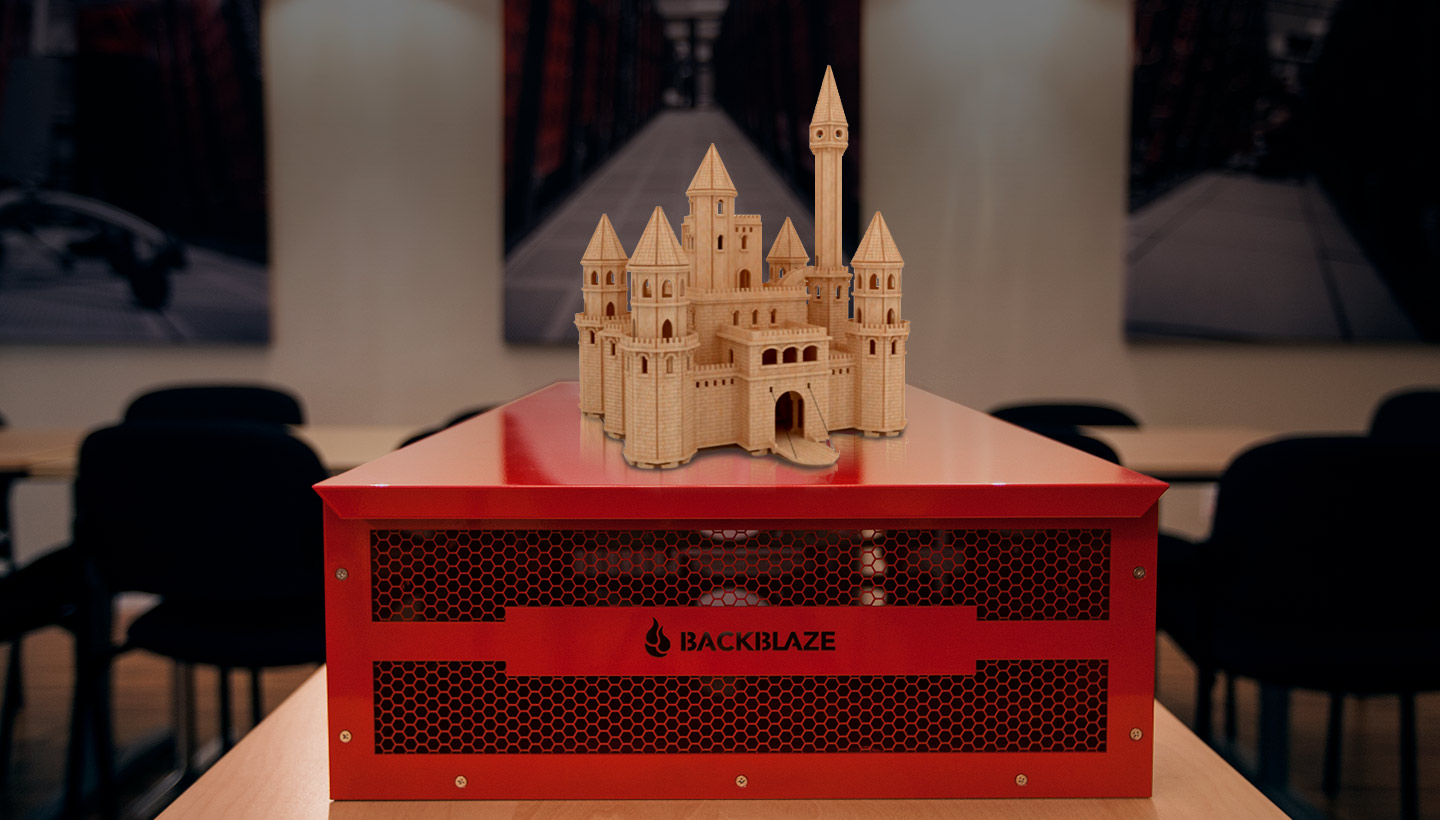 This post by Backblaze’s CEO and Co-founder Gleb Budman is the second in a series about entrepreneurship. You can choose posts in the series from the list below:

In my previous post on how Backblaze got started, I mentioned that “just because we knew the right solution, didn’t mean that it was possible.” I’ll dig into that here. The right solution was to offer unlimited backup for $5 per month. The price of storage at the time, however, would have likely forced us to price our unlimited backup service at two to five times that.

We were faced with a difficult challenge—compromise a fundamental feature of our product by removing the unlimited storage element, increase our price point in order to cover our costs but likely limit our potential customer base, seek funding in order to run at a loss while we built market share with a hope/prayer we could make a profit in the future, or find another way (huge unknown that might not have a solution). Below I’ll dig into the options that were available, the paths we tried, and how this challenge completely transformed our company and ended up being our greatest technological advantage.

Use a Storage Service

Originally, we intended to build the backup application, but leave the back-end storage to others, likely Amazon S3. This had many advantages:

Especially as a small, bootstrapped company with limited resources, these were incredible benefits.

There was just one problem. At S3’s then current pricing ($0.15/GB/month), a customer storing just 33GB would cost us 100% of the $5 per month we would collect. Additionally, we would need to pay S3 transaction and download charges, along with our engineering/support/marketing and other expenses. The conclusion, even if the average customer stored just 33GB, it would cost us at least $10/month for a customer that we were charging just $5/month.

In 2007, when we were getting started, there were a few other storage services available. But all were more expensive. Despite the fantastic benefits of using such a service, it simply didn’t work for us.

Buying storage systems didn’t have all the benefits of using a storage service—we would have to forecast need, buy in big blocks up front, manage data centers, etc.—but it seemed the second-best option. Companies such as EMC, NetApp, Dell, and others sold hundreds of petabytes of storage systems where they provide the servers, software, and support.

Alas, there were two problems: One temporary, the other permanent (and fatal). The temporary problem was that these systems were hundreds of thousands of dollars just to get started. This was challenging for us from a cash-flow perspective, but it was just a question of coming up with the cash. The permanent problem was that these systems cost around $1,000/TB of storage. Hard drives were selling for around $100/TB, so there was a 10 times markup for the storage system. That markup eliminated pursuing this path. What if the the average customer had 100GB to store? It would take us 20 months to pay off the purchase. We weren’t sure how much data the average customer would have, but the scenarios we were running made it seem like a $5/month price point was unsustainable.

If it’s impossible to offer unlimited backup for $5/month, there are certainly choices. We could have raised the price to $10/month, not make the backup unlimited, or close up shop altogether. All doable, none ideal.

Plenty of companies raise funding before they can be self sustaining, and it can work out great for everyone. We had raised funding for a previous company and believed we could have done it for Backblaze. And raising funding would have taken care of the cash flow issue if we chose to buy storage systems.

However, it would have left us with a business with negative unit economics—we would lose money on every customer, and the faster we grew, the more money we would lose. VCs do fund these types of companies often (many of the delivery companies today fall in this realm) with the idea that, at scale, you improve your cost structure and possibly also charge more. But it’s a dangerous game since not only is the business not self-sustaining, it inevitably must be significantly altered in order to survive.

Find a Way to Store Data for Less

If there were some way to store data for less, significantly less, it could all work. We had a tiny glimmer of hope that it would be possible: Since hard drives only cost ~$100/TB, if we could somehow use those drives without adding much overhead, that would be quite affordable.

“We wanted to build a sustainable business from day one and build a culture that believes dollars come from customers.”

Our first decision was to not compromise our product by restricting the amount of storage. Although this would have been a much easier solution, it violated our core mission: Create a simple and inexpensive solution to backup all of your important data.

We had previously also decided not to raise funding to get started because we wanted to build a sustainable business from day one and build a culture that believes dollars come from customers. With those decisions made, we moved onto finding the best solution to fulfill our mission and create a viable company.

All we wanted was to attach hard drives to the internet. If we could do that inexpensively, our backup application could store the data there and we could offer our unlimited backup service.

A hard drive needs to be connected to a server to be available on the internet. It certainly wouldn’t be very cost effective to have one server for every hard drive, as the server costs would dominate the equation. Alternatively, trying to attach a lot of drives to a server resulted in needing expensive enterprise servers. The goal then became cost-efficiently attaching as many hard drives as possible to one server. According to its spec, USB is supposed to allow for 127 devices to be daisy-chained to a single port. We tried; it didn’t work. We considered Firewire, which could connect 63 devices, but the connectors are aimed at graphic designers and ended up too expensive on a unit basis. Our next thought was to use small consumer-grade direct-attached storage (DAS) devices and connect those to a server. We managed to attach eight DAS devices with four drives each for a total of 32 hard drives connected to one server. 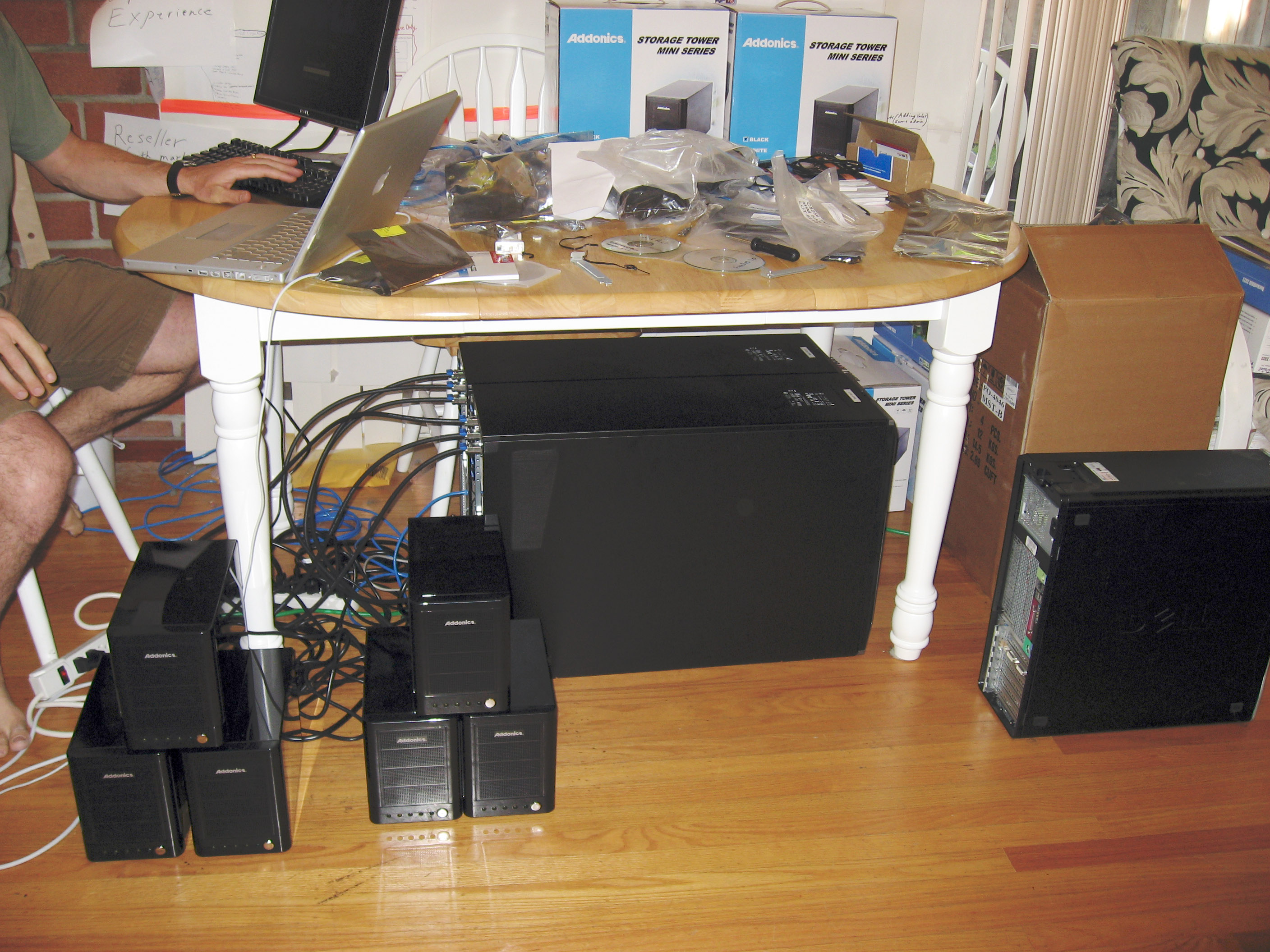 This worked well, but it was operationally challenging as none of these devices were meant to fit in a data center rack. Further complicating matters was that moving one of these setups required cabling 10 power cords, and separately moving nine boxes. Fine at small scale, but very hard to scale up.

We realized that we didn’t need all the boxes, we just needed backplanes to connect the drives from the DAS boxes to the motherboard from the server. We found a different DAS box that supports port multipliers and took that backplane. How did we decide on that DAS box? Tim, Co-founder & Chief Cloud Officer, remembers going to Fry’s and picking the box that looked “about right.”

That all laid the path for our eventual 45 drive design. The next thought was: If we could put all that in one box, it might be the solution we were looking for. The first iteration of this was a plywood box. 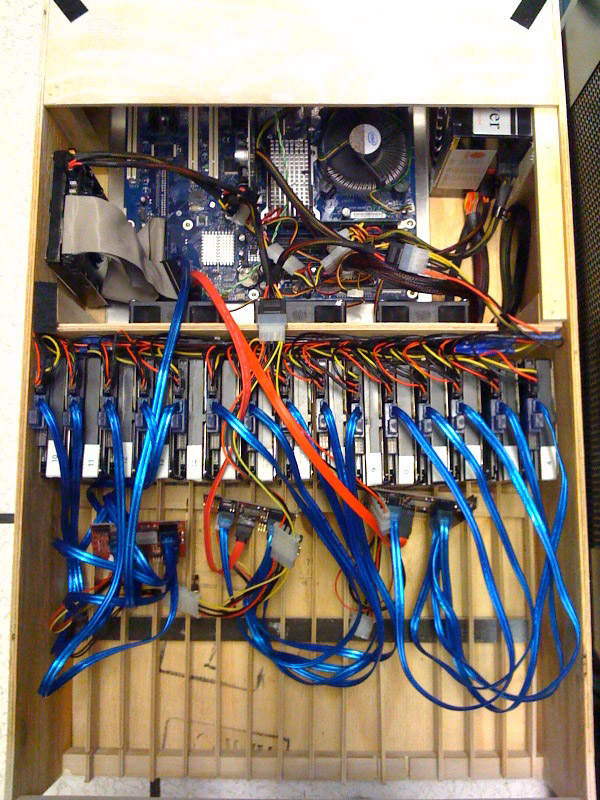 That eventually evolved into a steel server and what we refer to as a Storage Pod. 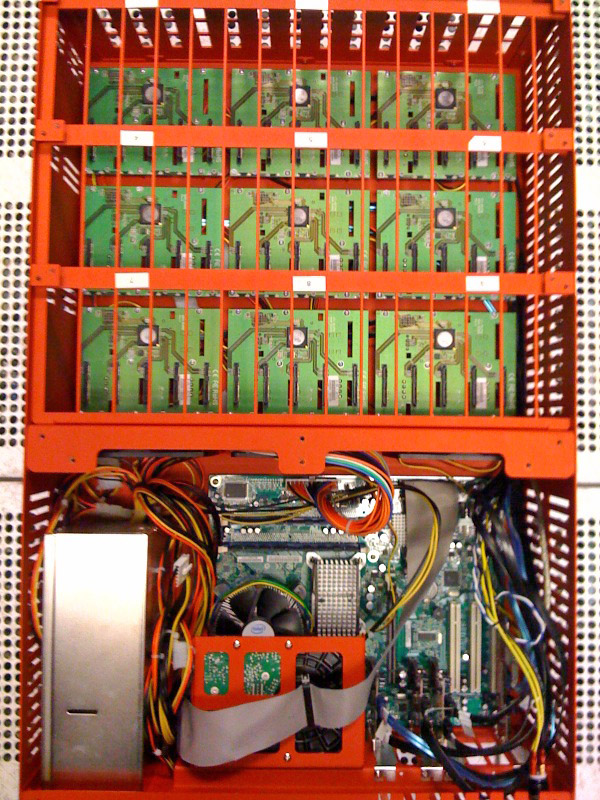 The Storage Pod became our key building block, but was just a tiny component of the ‘storage platform.’ We had to write software that would run on each Storage Pod, software that would create redundancy between the Storage Pods, and central software and systems that would coordinate other aspects of the system to accept/load balance/validate/clean up data. We had to find and train contract manufacturers to build the Storage Pods, find and negotiate data center space and bandwidth, set up processes to buy drives and track their reliability, hire people to maintain the systems, and set up the business processes to do all of this and more at scale.

All of this ended up taking tremendous technical effort, management engagement, and work from all corners of Backblaze. But it has also paid enormous dividends.

It didn’t just change how we built the service, it changed the fundamental DNA of the company.

Creating our own storage platform was certainly hard. But it enabled us to offer our unlimited backup for a low price and do that while running a sustainable business.

“It didn’t just change how we built the service, it changed the fundamental DNA of the company.”

We felt that we had a service and price point that customers wanted, and we “unlocked” the way to let us build it. Having our storage platform also provides us with a deep connection to our customers and the storage community—we share how we build Storage Pods and how reliable hard drives in our environment have been. That content, in turns, helps brings awareness to Backblaze; the awareness helps establish the company as a tech leader; that reputation helps us recruit to our growing team and earns customers who are evaluating our solutions vs. ‘Storage Company X.’

And after years of being a storage company with a backup service, and being asked all the time to just offer our storage directly, we launched our Backblaze B2 Cloud Storage service. We offer this raw storage at a price of $0.005/GB/month—that’s less than one-fourth of the price of S3.

If we had built our backup service on one of the existing storage services or storage systems, it would have been easier, but none of this would have been possible. This challenge, which we have spent a decade working to overcome, has also transformed our company and became our greatest technological advantage.