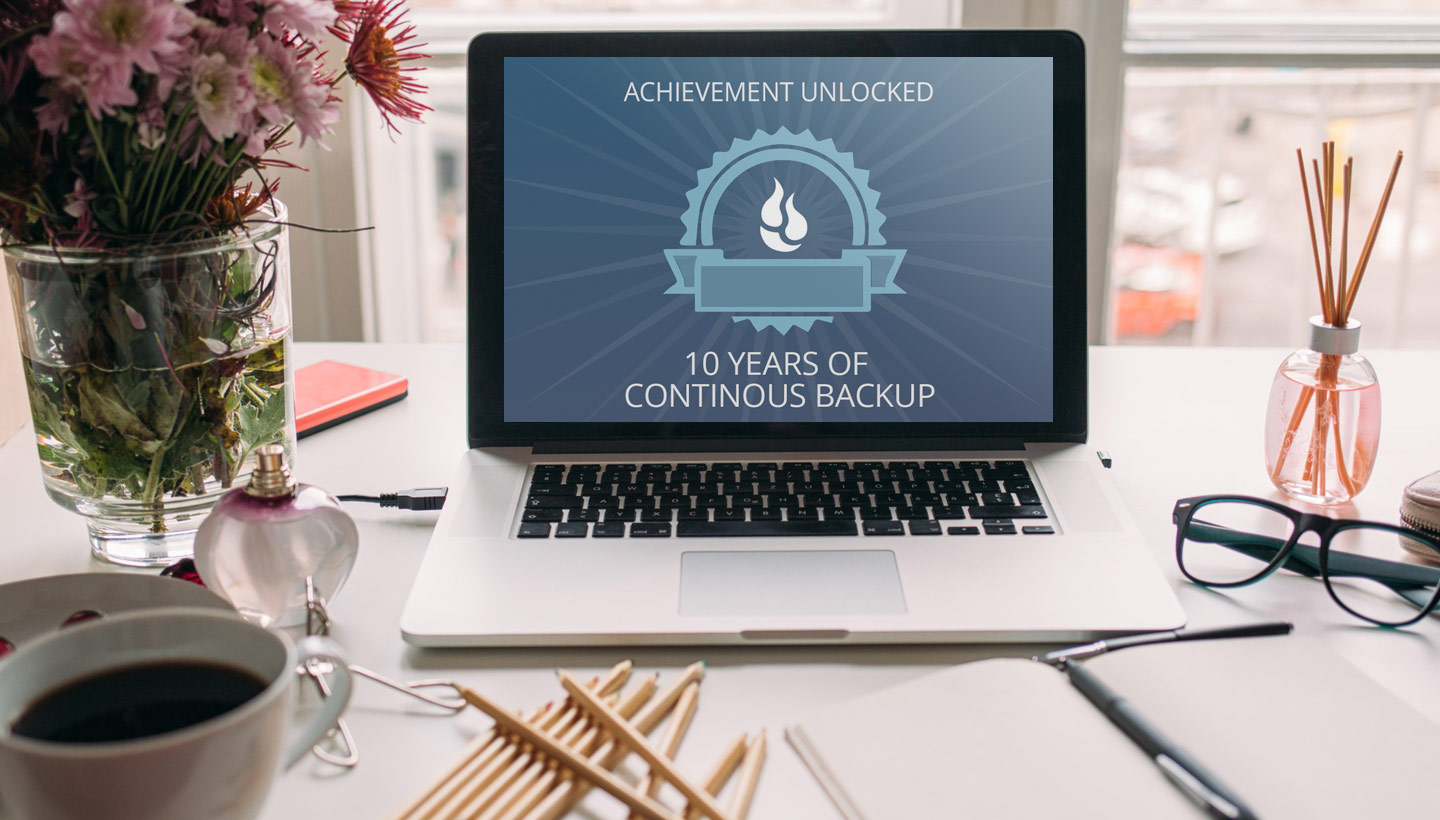 This is the 10th year Backblaze has designated June as Backup Awareness Month. It is also the 10th year of our annual Backup Awareness Survey. Each year, the survey has asked the question, “How often do you back up all of the data on your computer?” As they have done since the beginning, the good folks at Harris Interactive have conducted the survey, captured and tabulated the answers, and provided us with the results. Let’s take a look at what 10 years worth of surveys can tell us about computer backup.

Let’s start with 2017 and see how computer owners answered our question. 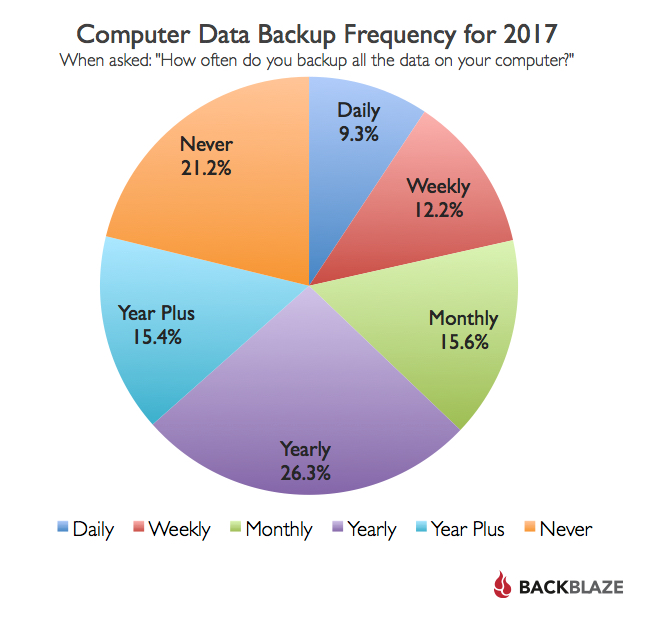 The most popular answer is “Yearly” at 26.3%. The least popular choice was “Daily” at just 9.3%. The difference between those two extremes can be easily calculated in days, but consider how much more data would be lost if you had backed up 364 days ago versus just 23 hours ago. How many photos, videos, spreadsheets, tax documents, and more would be lost when your computer crashed, or was stolen, or was attacked by ransomware like Wannacry or Cryptolocker. The longer the time between backups, the higher the risk of losing data.

Backup Trends Over the Last 10 Years

With 10 years worth of data, we have the opportunity to see if attitudes, or more appropriately actions, have changed with regards to how often people back up their data. 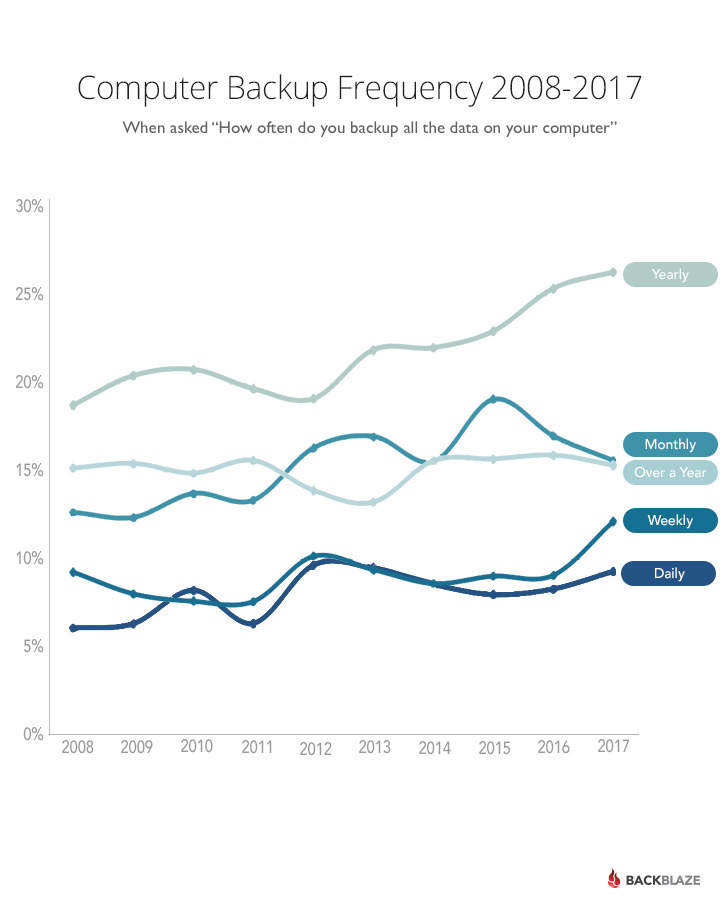 In general, more people seem to be backing up as all of the individual backup periods; daily, weekly, monthly, etc., are either the same or increasing their individual percentages over time. The chart below highlights the good news. 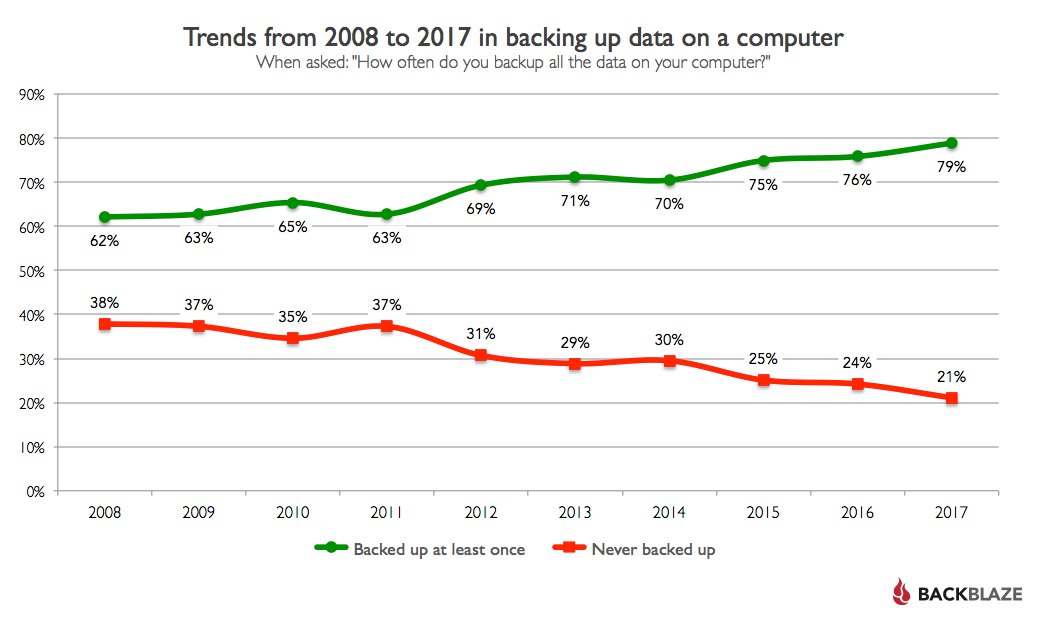 Facts and Figures and History

Each survey provides interesting insights into the attributes of backup fiends and backup slackers. Here are a few facts from the 2017 survey.

As we get older, we back up more often…

Why a whole month for backup awareness? There’s a theory in human behavior that says in order for something to become a habit, you have to do it consistently for at least three weeks. To make backing up your computer a habit, remind yourself each day in June to back up your computer. Tie a string around your finger or set a reminder on your phone, whatever it takes so that you remember to back up your computer each day in June. Of course, the three-week theory is considered unproven and “your mileage may vary,” but at least you’ll be backed up during the month of June.

Maybe, instead of trying to create a new daily backup habit, perhaps you could use a computer application. I’ll bet if you looked hard enough, you could find a computer program for your Mac or PC that would automatically remember to back up your computer each day—or even more often. That would awesome, right? Yes, it would.

Managing a Remote Workforce
Next Post: Data Backup: Minimizing the Impact of Ransomware