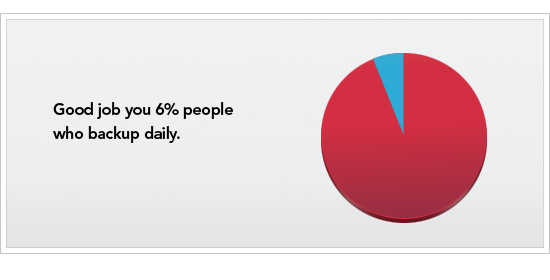 Each of the last four years during June’s Backup Awareness Month, Backblaze has conducted a data backup survey using Harris Interactive. We always ask the same question: are you backing up your computer data and, if so, how often?

The results of this fourth annual survey and the three previous ones are:

Percent of Respondents Who Back Up Computer Data

While in the last few years there has been a steady trend of more people backing up data; this year surprisingly fewer people responded that they back up their computers. Anyone have any theories?

Other interesting statistics from the survey:

Your thoughts on these? Expected/not expected?

Have some friends or coworkers who are not backing up?
Give them the gift of online backup.

These surveys were conducted online within the United States by Harris Interactive on behalf of Backblaze June 28-30, 2011 among 2,257 respondents; June 3-7, 2010 among 2,071 respondents; May 13-14, 2009 among 2,185 respondents; and May 27-29, 2008 among 2,761 respondents. In all surveys, respondents consisted of U.S. adult computer users (aged 18+), weighted to the U.S. adult population of computer users. No estimates of theoretical sampling error can be calculated; a full methodology is available.