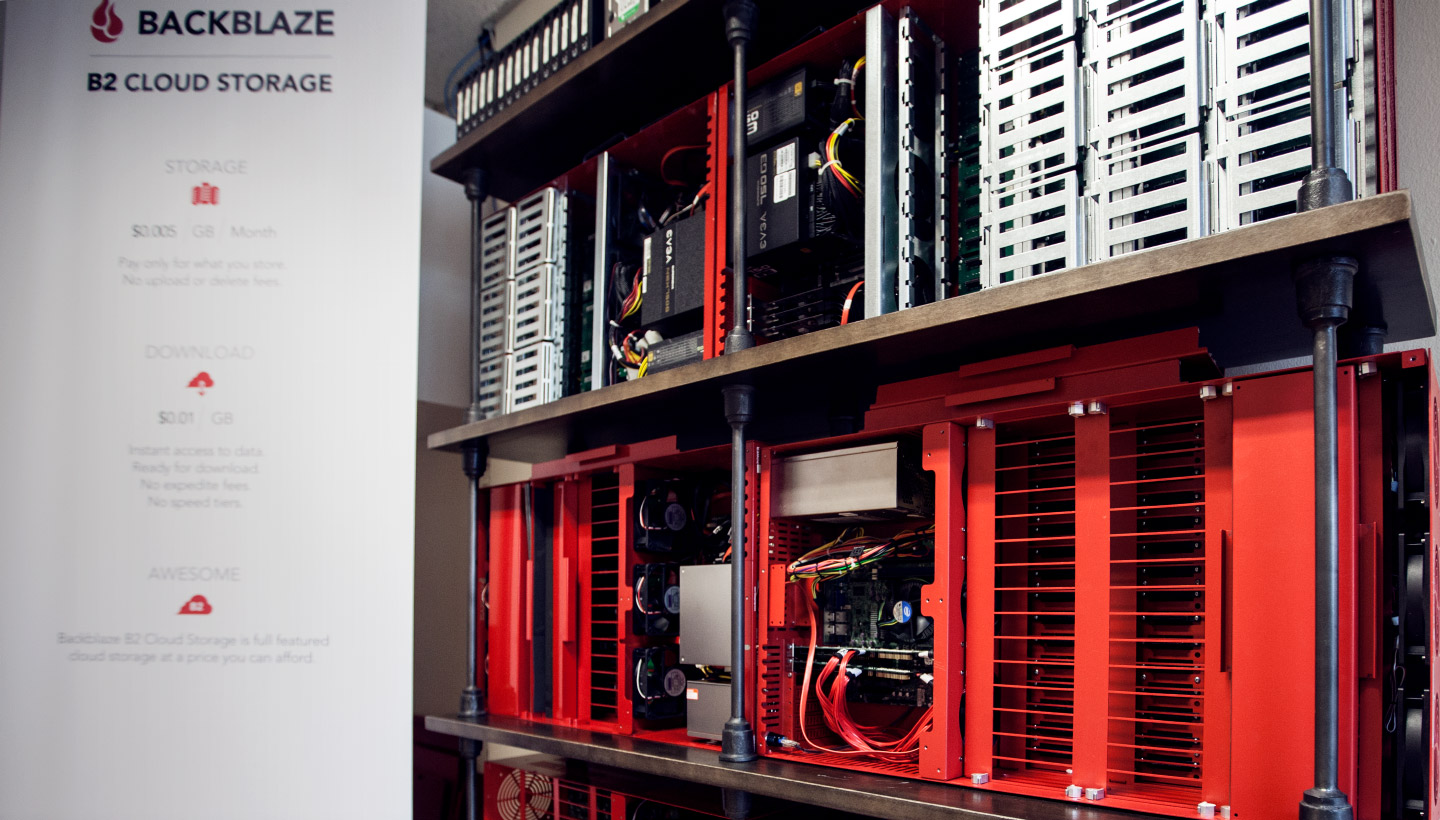 Merriam-Webster defines a museum as “an institution devoted to the procurement, care, study, and display of objects of lasting interest or value.” With that definition in mind, we’d like to introduce the Backblaze Storage Pod Museum. While some folks think of a museum as a place of static, outdated artifacts, others realize that those artifacts can tell a story over time of experimentation, evolution, and innovation. That is certainly the case with our Storage Pods. Modesty prevents us from saying that we changed the storage industry with our Storage Pod design, so let’s say we added a lot of red to the picture.

Over the years, Larry, our data center manager, has stashed away the various versions of our Storage Pods as they were removed from service. He also kept drives, SATA cards, power supplies, cables, and more. Thank goodness. With the equipment that Larry’s pack-rat tendencies saved, and a couple of current Storage Pods we borrowed (shhhh, don’t tell Larry), we were able to start the Backblaze Storage Pod Museum. Let’s take a quick photo trip through the years.

Before we announced Storage Pod 1.0 to the world nearly 10 years ago, we had already built about twenty or so Storage Pods. These early pods used Western Digital 1.0 TB Green drives. There were multiple prototypes, but once we went into production, we had settled on the 45-drive design with 3 rows of 15 vertically mounted drives. We ordered the first batch of ten chassis to be built and then discovered we did not spec a hole for the on/off switch. We improvised.

Storage Pod 1.0 — Petabytes on a Budget

Among the changes: the desktop motherboard in V1 was upgraded to a server class motherboard, we simplified things by using three four-port SATA cards, and reduced the cost of the chassis itself. In addition, we used Hitachi (HGST) 3 TB drives in Storage Pod 2.0 to double the total amount of storage to 135 TB. Over their lifetime, these HGST drives had an annualized failure rate of 0.82%, with the last of them being replaced in Q2 2017.

Storage Pod 3.0 brought the first significant chassis redesign in our efforts to make the design easier to service and provide the opportunity to use a wider variety of components. The most noticeable change was the introduction of drive lids — one for each row of 15 drives. Each lid was held in place by a pair of steel rods. The drive lids held the drives below in place and replaced the drive bands used previously. The motherboard and CPU were upgraded and we went with memory that was Supermicro certified. In addition, we added standoffs to the chassis to allow for Micro ATX motherboards to be used if desired, and we added holes where needed to allow for someone to use one or two 2.5” drives as boot drives — we use one 3.5” drive.

Up through Storage Pod 3.0, Protocase helped design and then build our Storage Pods. During that time, they also designed and produced a direct wire version, which replaced the nine backplanes with direct wiring to the SATA cards. Storage Pod 4.0 was based on the direct wire technology. We deployed a small number of these systems but we fought driver problems between our software and the new SATA cards. In the end, we went back to our backplanes and Protocase continued forward with direct wire systems that they continued to deploy successfully. Conclusion: there are multiple ways you can be successful with the Storage Pod design.

Storage Pod 4.5 — Backplanes are Back

We also began using Evolve Manufacturing to build these systems. They were located near Backblaze and were able to scale to meet our ever increasing production needs. In addition, they were full of great ideas on how to improve the Storage Pod design.

Storage Pod 5.0 — Evolution from the Chassis on Up

While Storage Pod 3.0 was the first chassis redesign, Storage Pod 5.0 was, to date, the most substantial. Working with Evolve Manufacturing, we examined everything down to the rivets and stand-offs, looking for a better, more cost efficient design. Driving many of the design decisions was the introduction of Backblaze B2 Cloud Storage that was designed to run on our Backblaze Vault architecture. From a performance point-of-view we upgraded the motherboard and CPU, increased memory fourfold, upgraded the networking to 10 GB on the motherboard, and moved from SATA II to SATA III. We also completely redid the drive enclosures, replacing the 15-drive clampdown lids with nine five-drive compartments with drive guides.

Storage Pod 6.0 increased the amount of storage from 45 to 60 drives. We had a lot of questions when this idea was first proposed, like would we need: bigger power supplies (answer: no), more memory (no), a bigger CPU (no), or more fans (no). We did need to redesign our SATA cable routes from the SATA cards to the backplanes as we needed to stay under the one meter spec length for the SATA cables. We also needed to update our power cable harness, and, of course, add length to the chassis to accommodate the 15 additional drives, but nothing unexpected cropped up — it just worked.

We’ll continue to increase the density of our storage systems. For example, we unveiled a Backblaze Vault full of 14 TB drives in our 2018 Drive Stats report. Each Storage Pod in that vault contains 840 terabytes worth of hard drives, meaning the 20 Storage Pods that make up the Backblaze Vault bring 16.8 petabytes of storage online when the vault is activated. As higher density drives and new technologies like HAMR and MAMR are brought to market, you can be sure we’ll be testing them for inclusion in our environment.

Nearly 10 years after the first Storage Pod altered the storage landscape, the innovation continues to deliver great returns to the market. Many other companies, from 45Drives to Dell and HP, have leveraged the Storage Pod’s concepts to make affordable, high-density storage systems. We think that’s awesome.