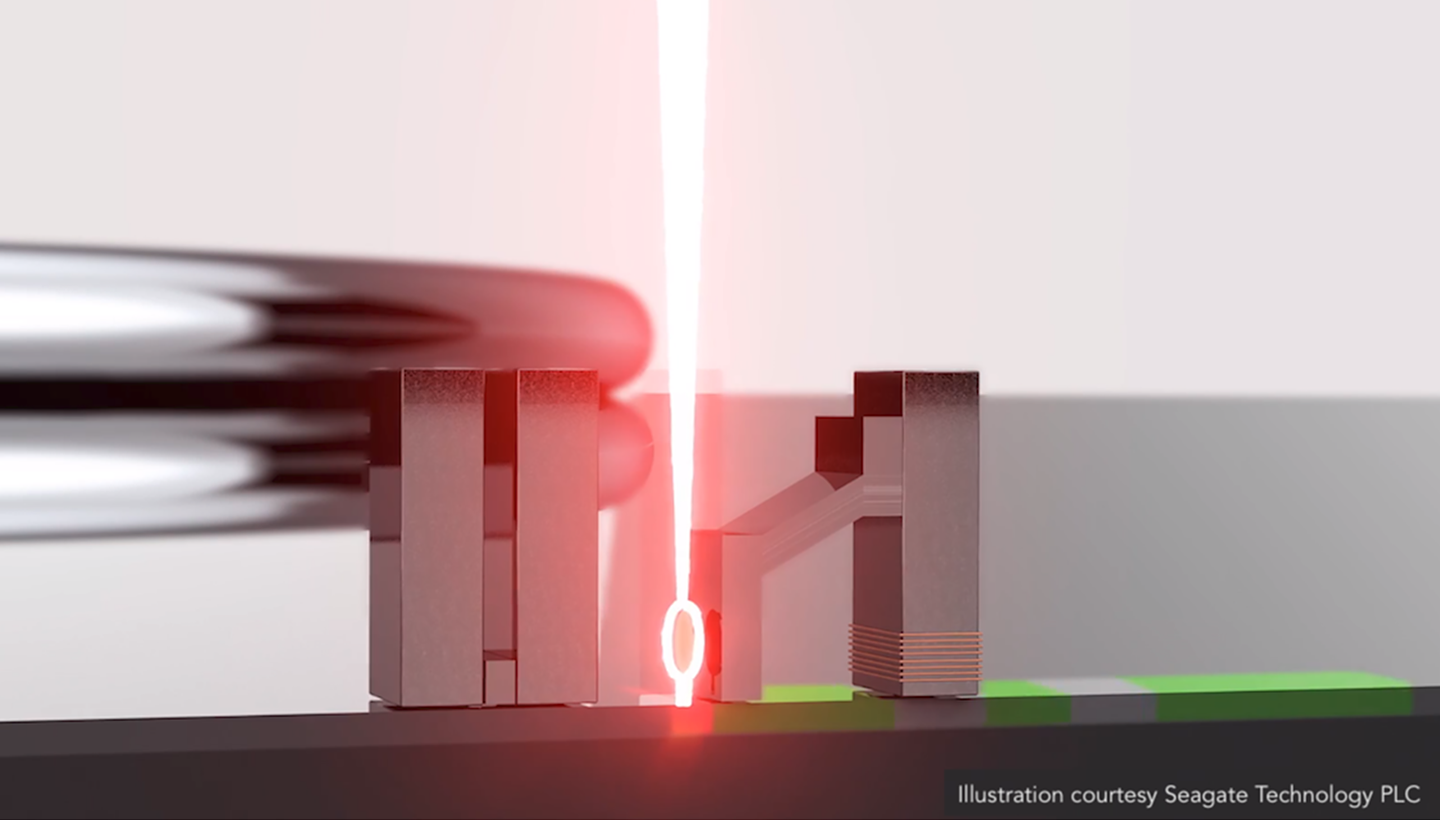 During Q4, Backblaze deployed 100 petabytes worth of Seagate hard drives to our data centers. The newly deployed Seagate 10 and 12 TB drives are doing well and will help us meet our near term storage needs, but we know we’re going to need more drives — with higher capacities. That’s why the success of new hard drive technologies like Heat-Assisted Magnetic Recording (HAMR) from Seagate are very relevant to us here at Backblaze and to the storage industry in general. In today’s guest post we are pleased to have Mark Re, CTO at Seagate, give us an insider’s look behind the hard drive curtain to tell us how Seagate engineers are developing the HAMR technology and making it market ready starting in late 2018.

What is HAMR and How Does It Enable the High-Capacity Needs of the Future?

Earlier this year Seagate announced plans to make the first hard drives using Heat-Assisted Magnetic Recording, or HAMR, available by the end of 2018 in pilot volumes. Even as today’s market has embraced 10TB+ drives, the need for 20TB+ drives remains imperative in the relative near term. HAMR is the Seagate research team’s next major advance in hard drive technology.

HAMR is a technology that over time will enable a big increase in the amount of data that can be stored on a disk. A small laser is attached to a recording head, designed to heat a tiny spot on the disk where the data will be written. This allows a smaller bit cell to be written as either a 0 or a 1. The smaller bit cell size enables more bits to be crammed into a given surface area — increasing the areal density of data, and increasing drive capacity.

It sounds almost simple, but the science and engineering expertise required, the research, experimentation, lab development and product development to perfect this technology has been enormous. Below is an overview of the HAMR technology and you can dig into the details in our technical brief that provides a point-by-point rundown describing several key advances enabling the HAMR design.

As much time and resources as have been committed to developing HAMR, the need for its increased data density is indisputable. Demand for data storage keeps increasing. Businesses’ ability to manage and leverage more capacity is a competitive necessity, and IT spending on capacity continues to increase.

For the last 50 years areal density in the hard disk drive has been growing faster than Moore’s law, which is a very good thing. After all, customers from data centers and cloud service providers to creative professionals and game enthusiasts rarely go shopping looking for a hard drive just like the one they bought two years ago. The demands of increasing data on storage capacities inevitably increase, thus the technology constantly evolves.

According to the Advanced Storage Technology Consortium, HAMR will be the next significant storage technology innovation to increase the amount of storage in the area available to store data, also called the disk’s “areal density.” We believe this boost in areal density will help fuel hard drive product development and growth through the next decade.

Why do we Need to Develop Higher-Capacity Hard Drives? Can’t Current Technologies do the Job?

Why is HAMR’s increased data density so important?

Data has become critical to all aspects of human life, changing how we’re educated and entertained. It affects and informs the ways we experience each other and interact with businesses and the wider world. IDC research shows the datasphere — all the data generated by the world’s businesses and billions of consumer endpoints — will continue to double in size every two years. IDC forecasts that by 2025 the global datasphere will grow to 163 zettabytes (that is a trillion gigabytes). That’s ten times the 16.1 ZB of data generated in 2016. IDC cites five key trends intensifying the role of data in changing our world: embedded systems and the Internet of Things (IoT), instantly available mobile and real-time data, cognitive artificial intelligence (AI) systems, increased security data requirements, and critically, the evolution of data from playing a business background to playing a life-critical role.

Consumers use the cloud to manage everything from family photos and videos to data about their health and exercise routines. Real-time data created by connected devices — everything from Fitbit, Alexa and smart phones to home security systems, solar systems and autonomous cars — are fueling the emerging Data Age. On top of the obvious business and consumer data growth, our critical infrastructure like power grids, water systems, hospitals, road infrastructure and public transportation all demand and add to the growth of real-time data. Data is now a vital element in the smooth operation of all aspects of daily life.

All of this entails a significant infrastructure cost behind the scenes with the insatiable, global appetite for data storage. While a variety of storage technologies will continue to advance in data density (Seagate announced the first 60TB 3.5-inch SSD unit for example), high-capacity hard drives serve as the primary foundational core of our interconnected, cloud and IoT-based dependence on data.

Seagate has been working on heat assisted magnetic recording (HAMR) in one form or another since the late 1990s. During this time we’ve made many breakthroughs in making reliable near field transducers, special high capacity HAMR media, and figuring out a way to put a laser on each and every head that is no larger than a grain of salt.

The development of HAMR has required Seagate to consider and overcome a myriad of scientific and technical challenges including new kinds of magnetic media, nano-plasmonic device design and fabrication, laser integration, high-temperature head-disk interactions, and thermal regulation.

A typical hard drive inside any computer or server contains one or more rigid disks coated with a magnetically sensitive film consisting of tiny magnetic grains. Data is recorded when a magnetic write-head flies just above the spinning disk; the write head rapidly flips the magnetization of one magnetic region of grains so that its magnetic pole points up or down, to encode a 1 or a 0 in binary code.

Increasing the amount of data you can store on a disk requires cramming magnetic regions closer together, which means the grains need to be smaller so they won’t interfere with each other.

Heat Assisted Magnetic Recording (HAMR) is the next step to enable us to increase the density of grains — or bit density. Current projections are that HAMR can achieve 5 Tbpsi (Terabits per square inch) on conventional HAMR media, and in the future will be able to achieve 10 Tbpsi or higher with bit patterned media (in which discrete dots are predefined on the media in regular, efficient, very dense patterns). These technologies will enable hard drives with capacities higher than 100 TB before 2030.

The major problem with packing bits so closely together is that if you do that on conventional magnetic media, the bits (and the data they represent) become thermally unstable, and may flip. So, to make the grains maintain their stability — their ability to store bits over a long period of time — we need to develop a recording media that has higher coercivity. That means it’s magnetically more stable during storage, but it is more difficult to change the magnetic characteristics of the media when writing (harder to flip a grain from a 0 to a 1 or vice versa).

In fact the new media is so “hard” that conventional recording heads won’t be able to flip the bits, or write new data, under normal temperatures. If you add heat to the tiny spot on which you want to write data, you can make the media’s coercive field lower than the magnetic field provided by the recording head — in other words, enable the write head to flip that bit.

So, a challenge with HAMR has been to replace conventional perpendicular magnetic recording (PMR), in which the write head operates at room temperature, with a write technology that heats the thin film recording medium on the disk platter to temperatures above 400 °C. The basic principle is to heat a tiny region of several magnetic grains for a very short time (~1 nanoseconds) to a temperature high enough to make the media’s coercive field lower than the write head’s magnetic field. Immediately after the heat pulse, the region quickly cools down and the bit’s magnetic orientation is frozen in place.

Applying this dynamic nano-heating is where HAMR’s famous “laser” comes in. A plasmonic near-field transducer (NFT) has been integrated into the recording head, to heat the media and enable magnetic change at a specific point. Plasmonic NFTs are used to focus and confine light energy to regions smaller than the wavelength of light. This enables us to heat an extremely small region, measured in nanometers, on the disk media to reduce its magnetic coercivity,

As always in advanced engineering, the devil — or many devils — is in the details. As noted earlier, our technical brief provides a point-by-point short illustrated summary of HAMR’s key changes.

Although hard work remains, we believe this technology is nearly ready for commercialization. Seagate has the best engineers in the world working towards a goal of a 20 Terabyte drive by 2019. We hope we’ve given you a glimpse into the amount of engineering that goes into a hard drive. Keeping up with the world’s insatiable appetite to create, capture, store, secure, manage, analyze, rapidly access and share data is a challenge we work on every day.

With thousands of HAMR drives already being made in our manufacturing facilities, our internal and external supply chain is solidly in place, and volume manufacturing tools are online. This year we began shipping initial units for customer tests, and production units will ship to key customers by the end of 2018. Prepare for breakthrough capacities.