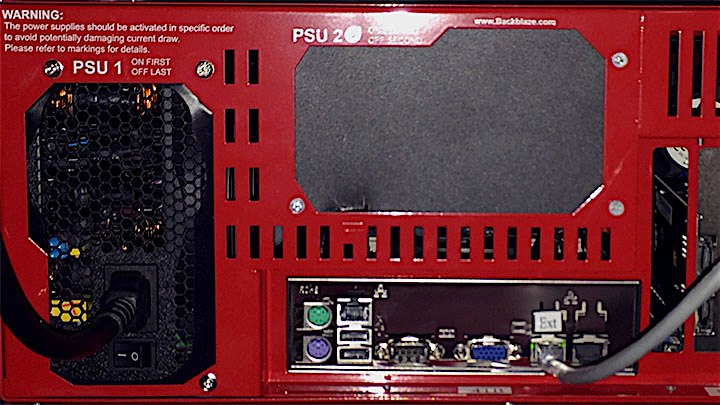 In November we introduced and open-sourced the design to Storage Pod 5.0. Extensively redesigned using our Agile hardware design process, Storage Pod 5.0 was the least expensive storage solution we’ve ever designed, until now. With one simple hack, you can now have 180TB of storage for about a $0.05 a gigabyte if you build it yourself. Here’s how.

The hack is to reduce the number of power supplies used in a Storage Pod from two to one. As with most hacks, there are a few of tricks that make this work:

Put all this together and we save about $150 on each Storage Pod we make. Savings come from the cost of the second PSU and one less cable offset by the cost of the cover plate. The cost of the hard drives has also decreased, but we won’t take credit for that…

Digging in to the Hack

The only outlier is the Seagate 4TB drive, more on that in a minute.

Even with the increasing power demands, we were able to use the same PSU in the 1.0, 2.0, 3.0, and 4.5 Storage Pod versions. We did change PSU models in Storage Pod 5.0, but the previous PSU should still work in the new environment.

Testing the viability of a single PSU has been on our to do list for a while as a means to decrease cost. With Backblaze Labs coming online, we were able to try this out. We started our testing with a drive we currently use, the Seagate 4TB drive (Model: ST4000DM000). We have nearly 30,000 of these drives in production and they have proven to be reliable with a respectable 3.06% annual failure rate in our environment.

The choice of this Seagate 4TB drive proved to be fortuitous:

Why This Matters to Backblaze

Eliminating the need for a second PSU saves about $150 per Pod. Is that worth the effort? What if we were to remove one PSU from each Storage Pod using the 4TB Seagate drives? That’s about 660 Storage Pods. If it costs us $50 in labor to remove the second PSU, we’d still “profit” by $100 per Pod or $66,000 in total and have power supplies for the next 660 Storage Pods.

Admittedly it’s not that simple—for example, what if we wanted to go to 6TB drives? They require more power, so the current single PSU probably would not work, thereby limiting our savings. Still, having this one-PSU hack available allows us to save a few dollars today and over time, all these little things add up.

Trying Other Hard Drives: The Seagate 4TB drive makes this hack work as it uses less power than the other drives we tried. For example, we bench-tested 500GB drives using a single PSU at our Storage Pod assembly facility. They failed—the Storage Pod would not boot-up. We are currently trying other drive models and we’ll let you know if we find any others that work.

Trying Other PSUs: As noted earlier, this hack used the same PSU as in Storage Pod 5.0. While we strive to keep the number of part models to a minimum to help keep costs down, Backblaze Labs is in the process of trying out other PSUs to see if they will work. We’ll let you know what we find.

If you plan on enhancing the operational capabilities of your Storage Pod, for example adding 7200 or 15000 rpm drives or beefing up the motherboard and CPU, pay attention to the power you’ll need. You don’t want to max out at 30 drives because you saved a few dollars on a PSU.

Building Your Own One PSU Storage Pod 5.0

To get started with building your own single PSU Storage Pod, you can check out the Storage Pod 5.0 blog post to get a parts list, build instructions, etc. You can buy nearly everything you need from just a Storage Pod chassis, to do-it-yourself kits, to fully assembled Storage Pods (without hard drives). For example, you could purchase a “Classic” kit, sell the extra PSU on eBay, build your own pigtail cable, install 45 hard drives, and you’re on your way for about $9,000 or about $0.05 per gigabyte not including tax, shipping, and of course, your time. And it looks like you can get about $100 for the extra PSU. 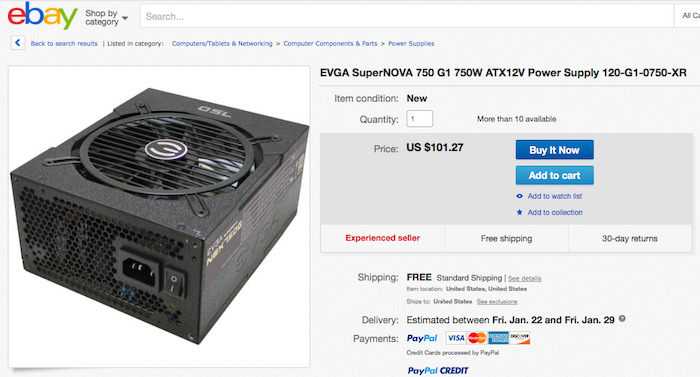 Over the years, many of you have taken our Storage Pod designs and added your own special “hacks.” If you have a hack or two you’d like to share, just let us know in the comments below or tweet us, @backblaze. If we get enough of them, we’ll select a handful of your enhancements and publish them in an upcoming blog post. Thanks.

A Fast Finish and a Visionary Start
Next Post: Introducing: Restore, Return, Refund