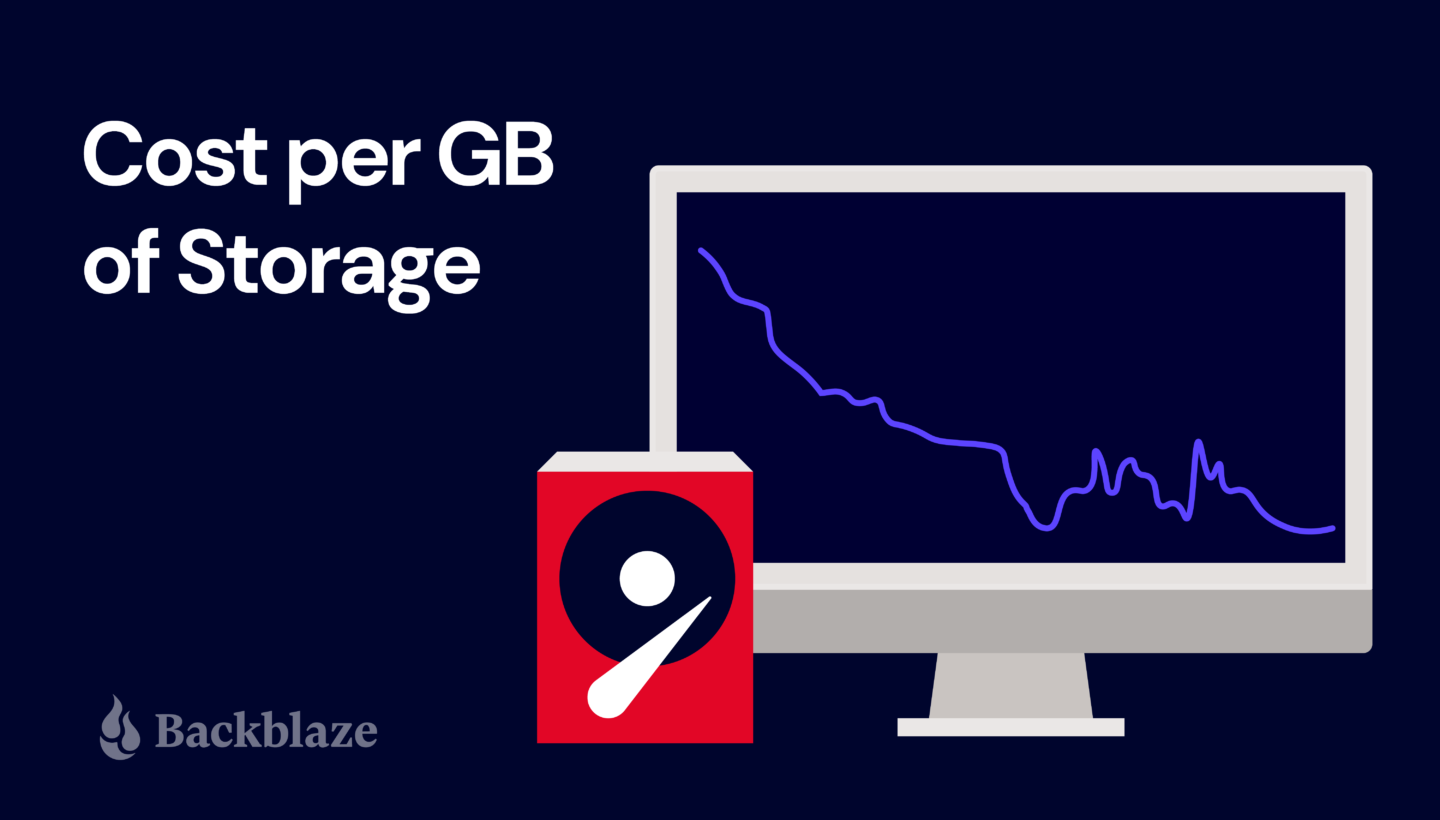 “A penny for your thoughts” is a common boomer expression (so says my 23 year old). Instead, how about “a penny for a gigabyte of hard disk”? That’s new, tech-y, and, well, it’s almost true.

Backblaze has purchase records going back to 2009. In that time, we’ve purchased 265,332 hard drives. We even recorded each of the hundreds of hard drives purchased during our drive farming days in 2011 and our crowdsourcing days in 2012. Thank you, Cecilia! The 265,322 number is not precise—some drives were purchased before 2009, some drives were purchased and never put into service, and, occasionally, we received a small number of test drives from manufacturers. Still, the 265,332 number is close. The breakdown in drives purchased by drive size is shown below. 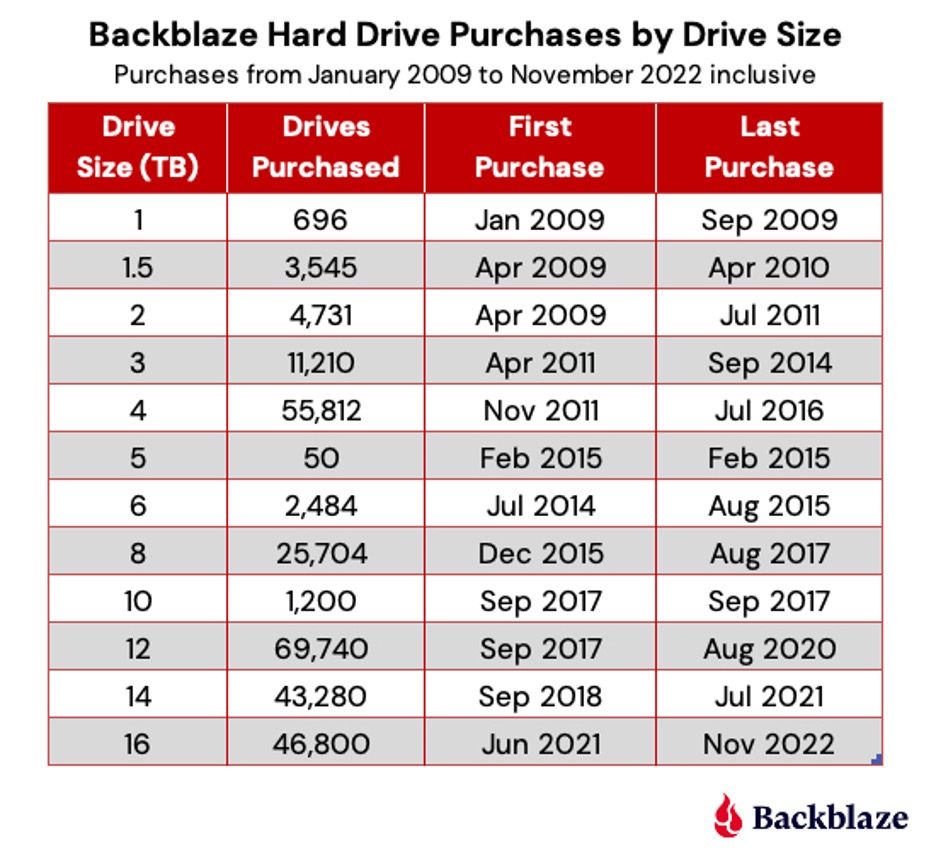 The 16TB drives are the only drive size we are currently purchasing. It is possible we could purchase a small group of spares for one of the other drive sizes. Unlikely at this point, but possible. In addition, the 16TB count does not include 12,000 drives purchased and scheduled for delivery over the next few months.

In 2023 we expect to qualify 18TB, 20TB, and potentially 22TB drives. Of course, we will wait a bit before purchasing in bulk to ensure the qualified drive models are stable over time and the price per gigabyte meets our expectations. Speaking of expectations, look for those drives to show up in the quarterly Drive Stats reports starting about mid-2023.

All of the drives we purchase use Perpendicular Magnetic Recording (PMR), also known as Conventional Magnetic Recording (CMR). We do not use Shingled Magnetic Recording (SMR) drives. SMR drives are sometimes less expensive but are demonstrably slower with random writes and when they are reusing space made available from previous file deletes. In most data backup use cases, where variable length writes and file deletions are the norm, the minimal cost savings of SMR drives is negated by the storage inefficiencies introduced by having to perform multiple writes to store data in tracks where data had been previously deleted.

The Cost Per Gigabyte

As noted earlier, our hard drive cost per gigabyte had fallen to a little over $0.03 by the end of 2017. At that point 8TB drives were our primary drives. Over the next few years we added 12TB, 14TB, and 16TB drives to the mix and the average cost per gigabyte continued to decrease as shown in the chart below. 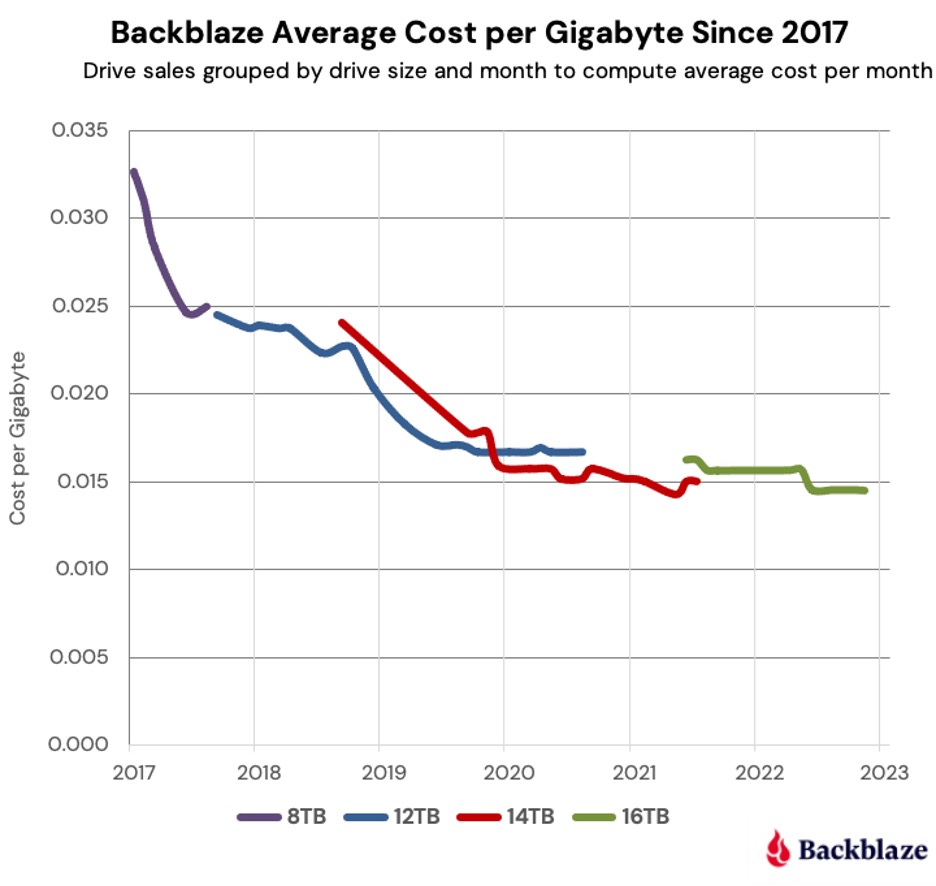 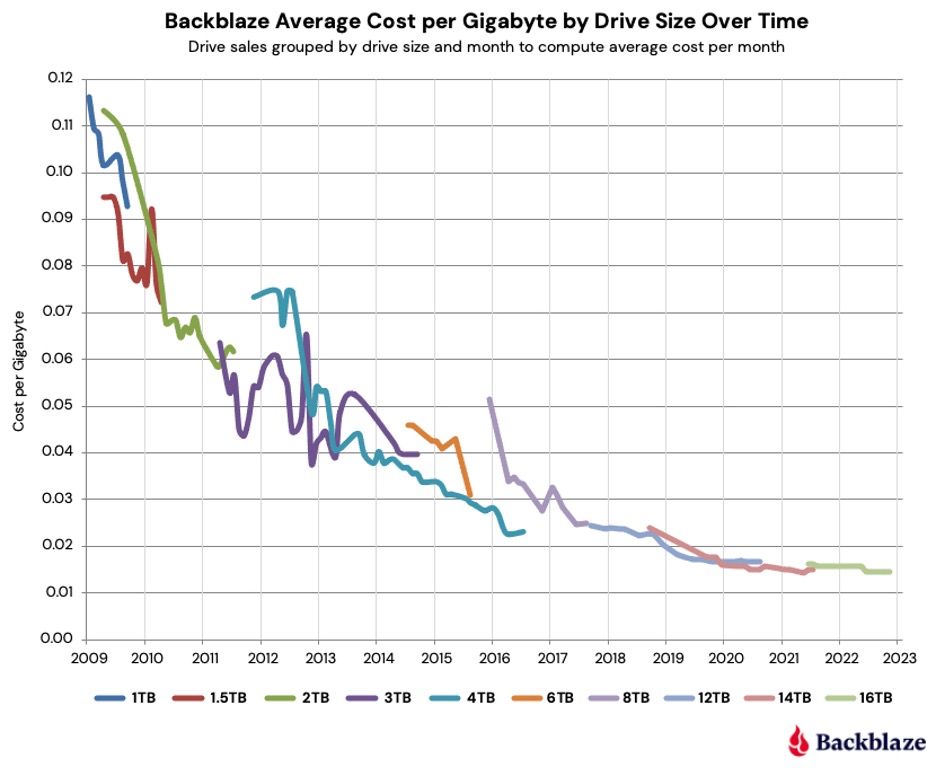 You can observe the overall down and to the right trend over the period, although the 3TB and 4TB drives make that drop messy. This was due primarily to the Thailand drive crisis which began in the second half of 2011 and continued to affect the market into 2013 before things got back to normal.

During that time drive technology hardly stood still as drive manufacturers crammed more platters in the same basic 3 ½ inch chassis, dramatically increased areal media density, figured out how to use helium inside the drives, started using glass substrates for their platters, and other improvements and innovations. Regardless of what you may think of a given drive manufacturer, that’s pretty awesome for the industry as a whole.

At this point, a fair question would be why the cost we charge for storage hasn’t decreased 87% since 2009? Our friends at IDC (source: Figure 10; IDC Thought Leadership Practice Case Study) have calculated that in 2009, there was about 0.3 zettabytes of data stored on hard drives worldwide, and they estimated that by the end of 2022 there would be 1.8 zettabytes. That’s an increase of 500% for the amount of data stored on hard drives over the period. Let’s just say the global population is storing a lot more data and leave it at that.

Of course, you don’t buy hard drives using percentages, you use dollars (or pesos, or pounds, or euros, and so on.) Let’s take a minute to see what price you would have to pay versus what we have paid. We’ve listed the best street price we could find for some of the 12TB, 14TB, and 16TB drives we use. 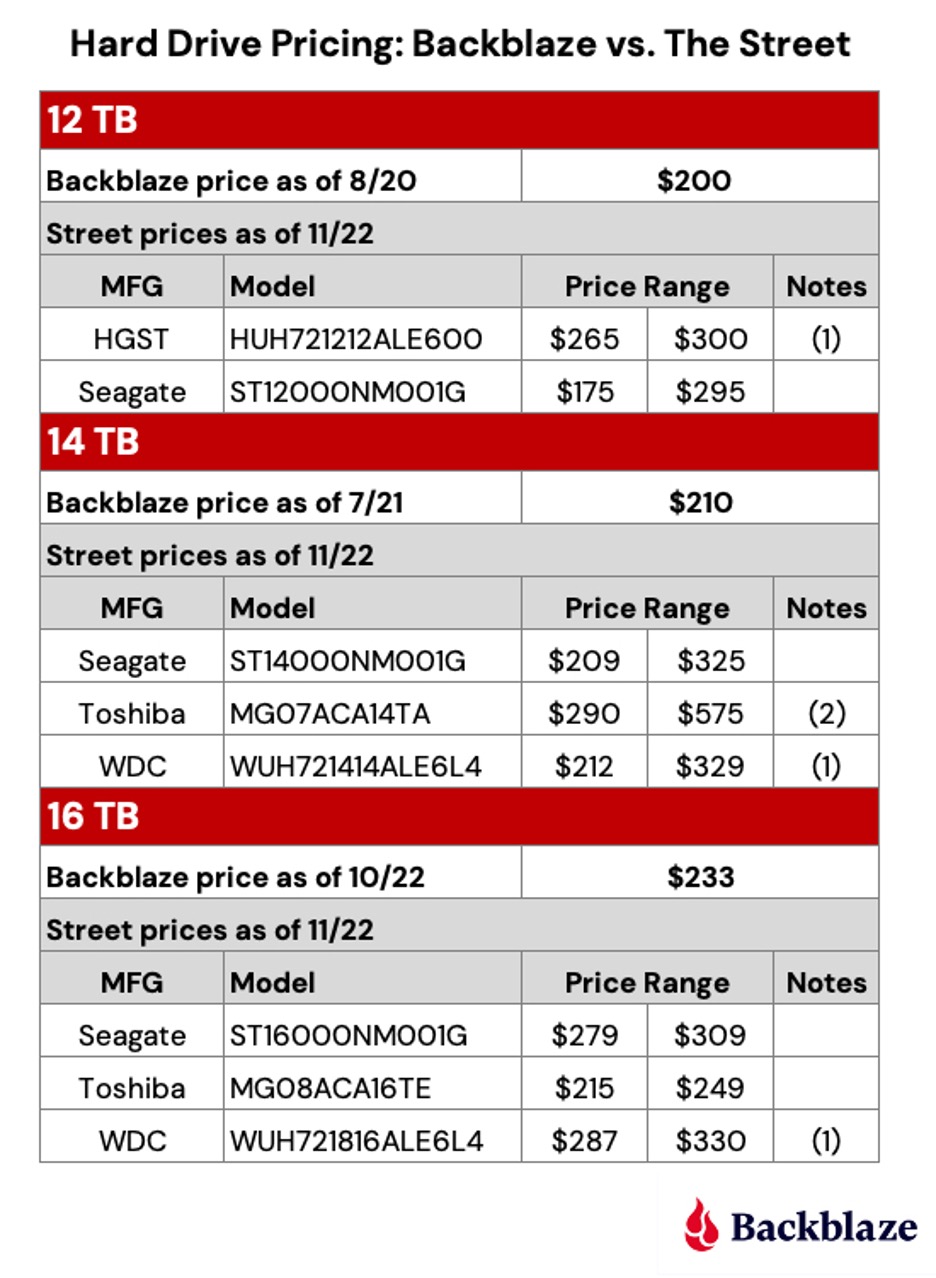 Remember, we buy drives in bulk quantity and on contract with guaranteed pricing, delivery dates, and such. It’s not quite the same thing as buying a drive from a shrink wrapped pallet at Costco or from a Cyber Monday deal on Amazon. You may be able to buy a couple of drives at a great price, but when you need 12,000 drives delivered to your front door on a certain date, Amazon Prime isn’t going to cut it. As a result, it may cost a dollar or two more per drive to ensure we have what we need when we need it.

Where Is the Bottom?

When we published our 2017 report on this topic, we proclaimed the race to the bottom was over, implying that the cost per gigabyte could not go much (if any) lower. We were wrong.

So where is the bottom? There’s an expression that goes something like, “We have done so much for so long with so little that we can now do practically anything with nothing.” There are probably folks at the drive manufacturers mumbling that expression to themselves on a daily basis as they try to cram more bits in less space on increasingly thin sheets of coated glass racing by at 5,400/7,200/15,000 revolutions per minute.

Is $0.01 per gigabyte the bottom? At the risk of having boomers shout “How low can you go?” and throw their backs out doing the limbo, we’ll ask: How low can the cost per gigabyte go? Tell us what you think.

Happy Thanksgiving from Backblaze
Next Post: Why Cyberattacks Surge During the Holiday Season