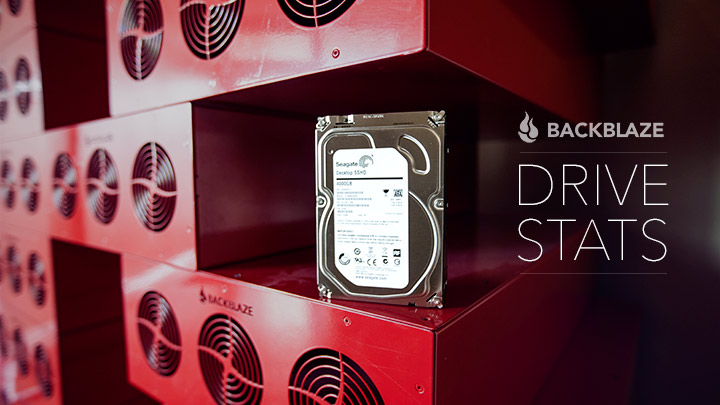 By the end of 2015, the Backblaze data center had 56,224 spinning hard drives containing customer data. These hard drives reside in 1,249 Backblaze Storage Pods. By comparison, 2015 began with 39,690 drives running in 882 Storage Pods. We added 65PB of storage in 2015, give or take a petabyte or two. Not only was 2015 a year of growth, it was also a year of drive upgrades and replacements. Let’s start with the current state of the hard drives in our data center as of the end of 2015 and then dig into the rest later on.

The table below contains the statistics for the 18 different models of hard drives in our data center as of 31 December 2015. These are the hard drives used in our Storage Pods to store customer data. The failure rates and confidence intervals are cumulative from Q2 2013 through Q4 2015. The drive count is the number of drives reporting as operational on 31 December 2015. 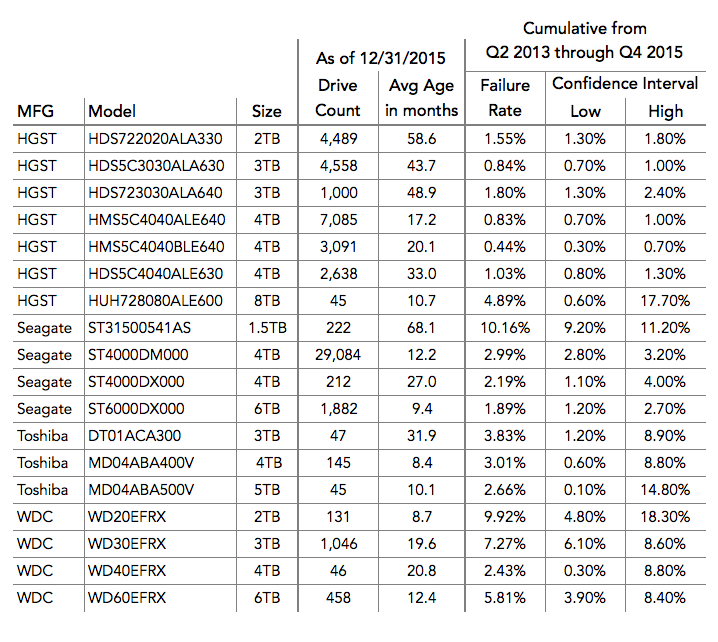 Note that drives retired and removed from service are not marked as “failed,” they just stop accumulating drive-hours when they are removed.

This is a good point to review how we compute our drive failure rates. There are two different ways to do this, either works.

For the first way, there are four things required:

Let’s use the example of 100 drives which over the course of 2015 accumulated a total of 750,000 power-on hours based on their SMART 9 RAW values. During 2015, our period of observation, five drives failed. We use the following formula to compute the failure rate:

For the second method, the only change is how we count the time a group of drives is in service. For a given drive we simply count the number of days that drive shows up in our daily log files. Each day a drive is listed it counts as one drive-day for that hard drive. When a drive fails, it is removed from the list and its final count is used to compute the total number of drive-days for all the drives being observed.

The drives in the data center come from four manufacturers. The following chart shows the cumulative hard drive failure rates by manufacturer for all drives: 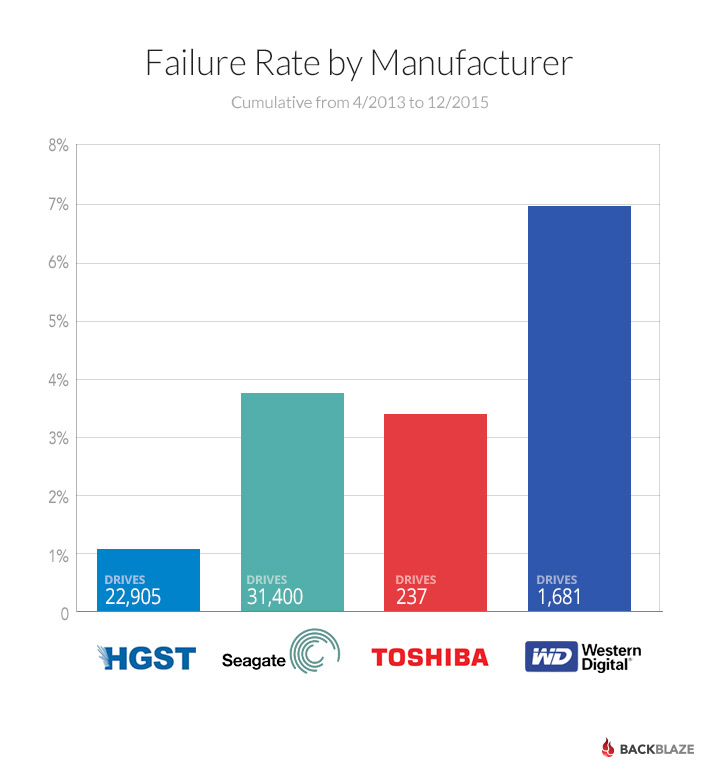 Let’s take a look at the “make up” of the drives in our data center.

We removed the last of our 1TB drives during Q4 and ended the quarter with zero installed. This was done to increase the amount of storage in a 1TB filled Storage Pod as we replaced the 1TB drives with 4TB drives (and sometimes 6TB drives). Now, in the same Storage Pod, we get four times as much data. The 1TB Western Digital drives performed well with many of the drives exceeding six years in service and a handful reaching seven years before we replaced them. The cumulative annual failure rate was 5.74% in our environment, a solid performance.

We actually didn’t retire these 1TB Western Digital drives—they just changed jobs. We now use many of them to “burn-in” Storage Pods once they are done being assembled. The 1TB size means the process runs quickly, but is still thorough. The “burn-in” process pounds the drives with reads and writes to exercise all the components of the system. In many ways this is much more taxing on the drives than life in an operational Storage Pod. Once the “burn-in” process is complete, the Western Digital 1TB drives are removed and we put 4TB or 6TB drives in the Pods for the cushy job of storing customer data. On the other hand, the workhorse 1TB Western Digital drives are returned to the shelf where they dutifully await the next “burn-in” session.

The Seagate 2TB drives were also removed from service in 2015. While their cumulative failure rate was slightly high at 10.1%, they were removed from service because we only had 225 of those drives and it was easier to upgrade the Storage Pods to 4TB drives than to buy and stock the 2TB Seagate drives.

On the other hand, we still have over 4,500 HGST 2TB drives in operation. Their average age is nearly five years (58.6 months) and their cumulative failure rate is a meager 1.55%. At some point we will want to upgrade the 100 Storage Pods they occupy to 4TB or 6TB drives, but for now the 2TB HSGT drives are performing very well.

The last of the 3TB Seagate drives were removed from service in the data center during 2015. Below is a chart of all of our 3TB drives that were in our data center anytime from April 2013 through the end of Q4 2015.

As of the end of 2015, 75% of the hard drives in use in our data center were 4TB in size. That represents 42,301 drives broken down as follows by manufacturer: 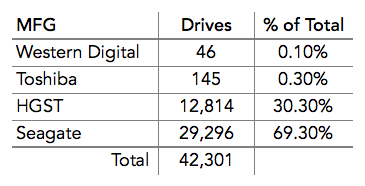 The cumulative failure rates of the 4TB drives to date are shown below: 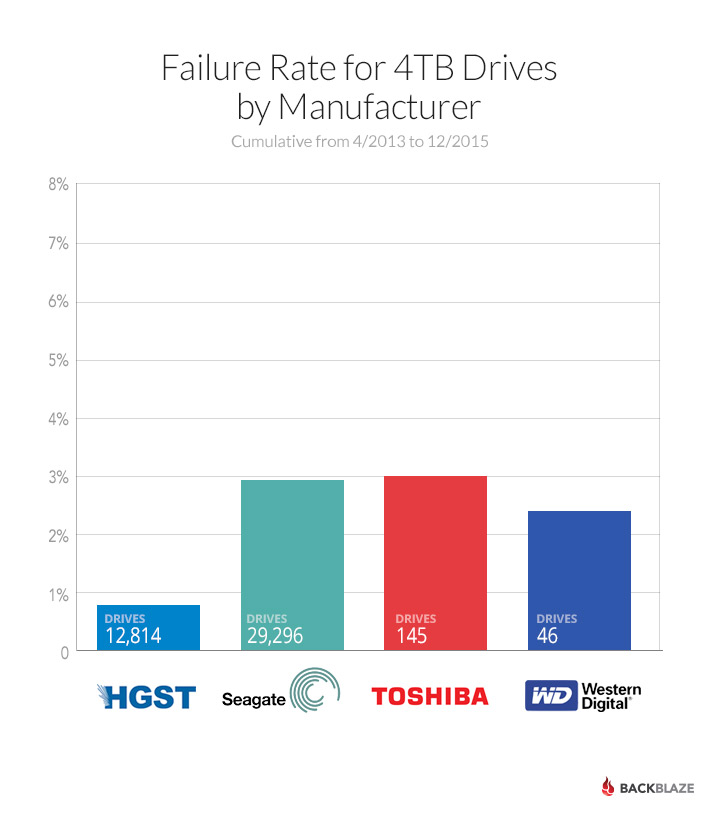 A relevant observation from our Operations team on the Seagate drives is that they generally signal their impending failure via their SMART stats. Since we monitor several SMART stats, we are often warned of trouble before a pending failure and can take appropriate action. Drive failures from the other manufacturers appear to be less predictable via SMART stats.

We continued to add 6TB drives over the course of 2015, bringing the total to nearly 2,400 drives (1,882 Seagate, 485 Western Digital). Below are the Q4 and cumulative failure rates for each of these drives.

The Seagate 6TB drives are performing very well, even better than the 4TB Seagate drives. So why do we continue to buy 4TB drives when quality 6TB drives are available? Three reasons:

Each day, we record and store the drive statistics on every drive in our data center. This includes the operational status of the drive, along with the SMART statistics reported by each drive. We use the data collected to produce our drive stats reviews. We also take this raw data and make it freely available by publishing it on our website. We’ll be uploading the Q4 2015 data in the next few days then you will be able to download the data so you can reproduce our results or you can dig in and see what other observations you can find. Let us know if you find anything interesting.