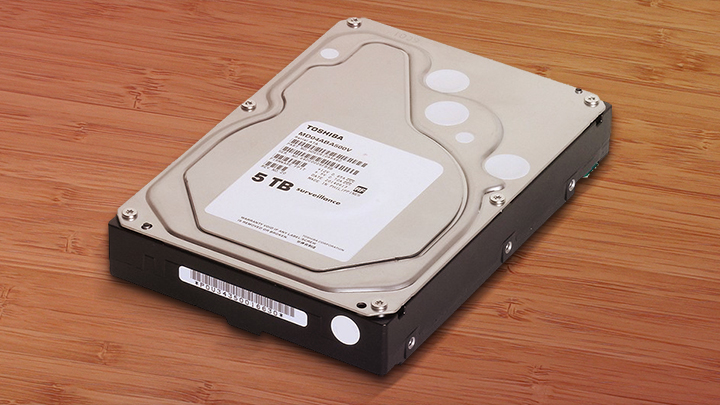 Over the past year or so, we’ve covered the virtues and vices of nearly all the different hard drives we use in our Backblaze Storage Pods. From HGST to Seagate to Western Digital hard drives, we’ve charted drive hours, plotted failure rates, reported on drive temperature, and more. The one missing brand: Toshiba. We’ve had one Storage Pod filled with Toshiba 3TB drives deployed for two years and we recently deployed Pods with 4TB and 5TB Toshiba drives. In our experience with Toshiba drives, here’s what we’ve learned so far.

Toshiba got back into the 3.5” form-factor hard drive business in 2012, when it acquired the production assets from Hitachi as part of Western Digital’s purchase of Hitachi. This acquisition meant there would be more suppliers of 3.5” form-factor hard drives than the existing two (Seagate and Western Digital). After Toshiba took over the business, the early 3TB drives (model: DT01ACA300) were dual branded Hitachi 3TB drives, model: HDS723030BLE640. While the branding is now completely Toshiba, it is safe to say that a fair amount of Hitachi technology continues to live on in the Toshiba 3.5” drives.

In January 2013 we purchased and soon after, deployed, 45 Toshiba 3TB hard drives (model: DT01ACA300). Though the current consumer channel price starts at $94.50 each on Amazon, we paid $106.73 each in early 2013. Besides the 45 Toshiba drives, we also have 10 of the Hitachi model HDS723030BLE640 drives that were the predecessors to the Toshiba drives. Given the limited number of drives for each model, a comparison is not appropriate, but here’s how those 3TB Toshiba and Hitachi drives are performing in our environment:

Toshiba added 4TB and 5TB hard drives to their line over the last couple of years. We purchased and deployed 45 drives of each size in January 2015. Here are the stats to date on those drives:

We also tracked the ability of the two drives to load data in the same fashion as previous observations done with Seagate, Western Digital, and HGST drives. Below we’ve compared the Toshiba drives to an HGST 4TB drive: 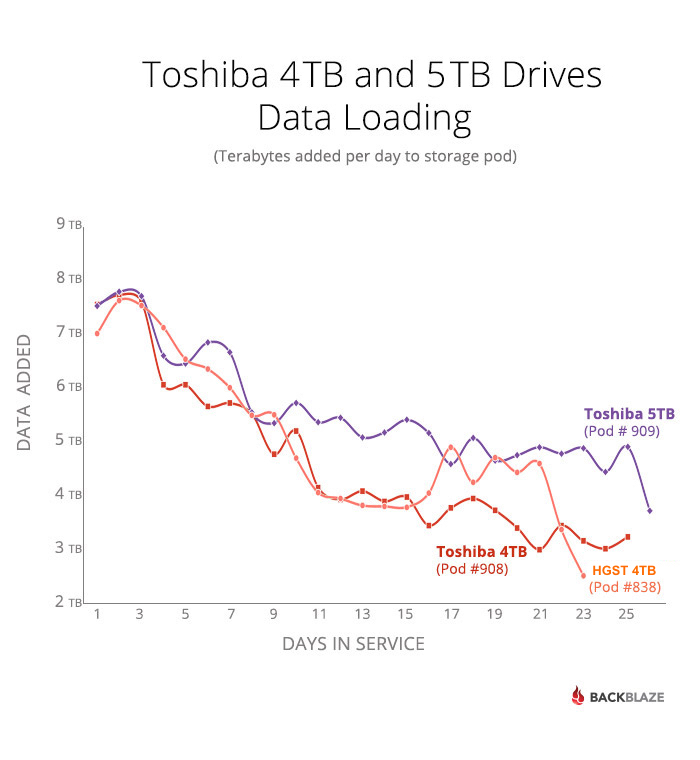 Both drive models performed well in their respective Storage Pods. Here’s how they stacked up against some of our recent data loading observations:

As you can see, the Toshiba drives performed well, especially the 5TB drives.

Why Don’t We Have More Toshiba Drives?

While the data is a bit thin, the Toshiba drives do compare well to the other drives in our data center when it comes to failure rates and loading speed. There are three reasons why we don’t have more of them:

One thing to remember is that the hard drives in Storage Pods are mounted vertically and very close together. To confirm that you have located the bad drive, you match the serial number displayed on top of the vertically mounted drive. HGST, Seagate, and Western Digital drives all have the serial number of the drive on the top end of the drive. Toshiba drives do not. Instead, on the end of a Toshiba drive is what we think is a production code or something similar. You can see this code in the header image of this post. We do not know if this code is unique.

Because the codes on the end of the Toshiba drives do not help us, we rely on the drive location designator (sda, sdb…sdat) to locate the failed Toshiba drive. The trouble is that each time a Storage Pod is rebooted, the boot drive can be first (sda) or last (sdat) in the drive sequence. This means we have two possible physical locations for the failed Toshiba drive. We remove the drives one at a time, check the serial number on the side, and replace the failed drive when it is found. This puts a little extra wear and tear on the good drives as well as the backplanes, and lengthens the maintenance time by a few minutes.

If the Toshiba drives continue to demonstrate low failure rates and solid performance, we are willing to live with slightly longer maintenance times for replacing failed Toshiba drives. We recently were able to order 100 of the 4TB drives from our channel although the process was a bit cumbersome. We will probably not order any more 5TB drives as the market seems to be quickly advancing to 6, 8, and soon 10TB drives. Also, the cost per terabyte for the 6TB drives is already nearly as low as it is for the 5TB drives.

In summary, initial observations indicate that the Toshiba drives are good, but the MD04ABA400V and MD04ABA500V models are hard to find in quantity. As we deploy our recently purchased 4TB Toshiba drives over the next few months, we’ll let you know if anything interesting happens.