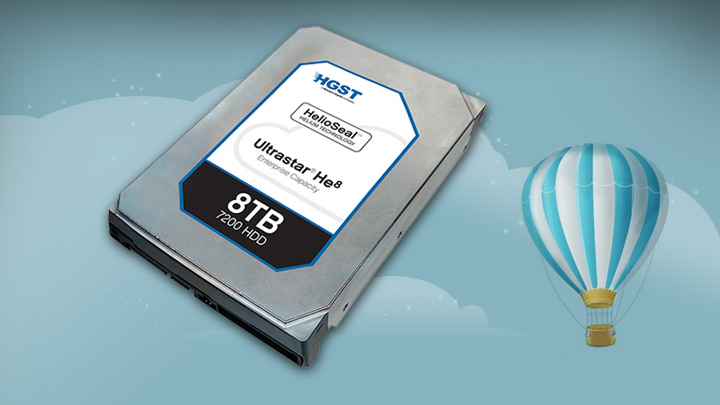 We recently installed and deployed 45 HGST 8TB hard drives into Backblaze Storage Pod 902 and the drives have recently completed their initial data loading phase. As we have done with Seagate, Western Digital, and Toshiba drives, we tracked the HGST drives during their data loading phase to see how well they performed. Here’s what we know so far.

The HGST 8TB drives are filled with helium. According to the HGST literature, the helium-filled environment lets the disks spin more easily, as helium offers less resistance versus air. This means less power is required to spin the disks and they run cooler. It also means they can have more disks and read/write heads with the HGST 8TB drive having seven platters in a similar space as other drives.

The amount of helium in a drive is not published, but it is tracked as SMART attribute 22, with both the raw and normalized values starting at 100. During our period of observation, the value of these attributes did not change.

We filled Storage Pod 902 with 45 HGST 8TB drives. That created our very first 360TB Storage Pod. If we built out a rack of 10 Pods, we would have 3.6PB of storage in one full height rack. That would be awesome, but it won’t happen yet—more on that later in this post. 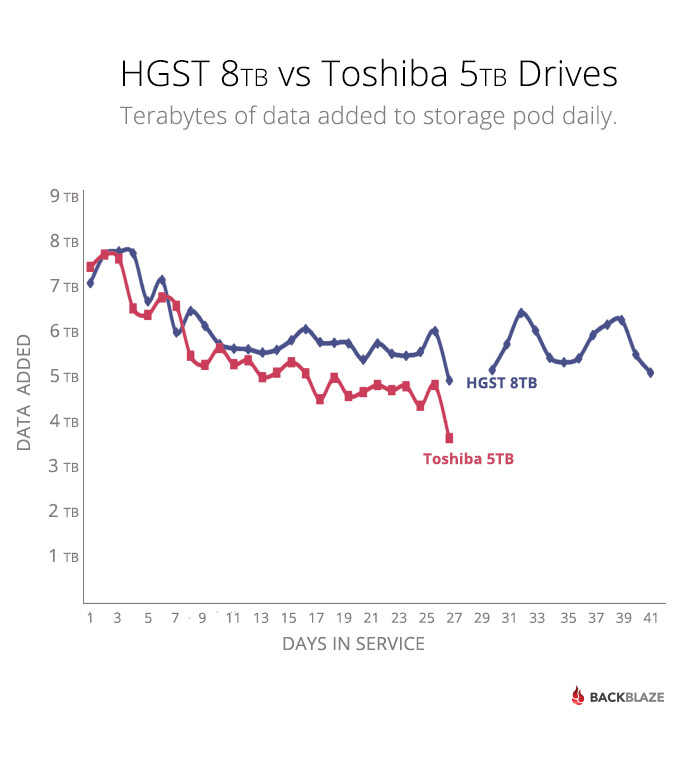 You might be wondering about the two days in the chart above on the HGST data line where it appears no data was written to the Storage Pod. That was caused by a drive failure. Yes, one of the 45 HGST 8TB drives failed in the middle of our observation period. The drive was replaced a short time after it failed, but no data was loaded for two days; why? Let’s walk through the process of when a drive fails.

By the way, in a Backblaze Vault, when a drive fails it will cause zero downtime for reading or writing even as the data center technician goes through the steps outlined above. This is one of the reasons for migrating from individual Storage Pods to the Backblaze Vault architecture.

It should be noted that the two days that Storage Pod 902 was not receiving new data is part of the 40 total days it took to reach the 80% full benchmark. If you were to subtract those two days, then the average amount of data loaded per day would be 5.96TB per days for the 38 days the Pod was able to receive data. Where, oh where, should the asterisks be?

There are many things to like about the HGST 8TB drives: the low power requirements, high storage capacity, and five year warranty lead the list. Currently, the lowest street price we’ve found is $547.99 on Amazon with some sites asking for as much as $795 for each drive. Using street prices, let’s compare the cost per gigabyte of the HGST to the different drives we currently use most often:

The cost per terabyte of the HGST 8TB drive is currently about 1.6 times more expensive than the drives we are currently purchasing. While the HGST 8TB drive is an enterprise class drive, the premium we’d have to pay doesn’t make sense for us, especially as we move to Backblaze Vaults where individual drive failures have zero effect on downtime. Yes, we’ve built and placed into production a 360TB Storage Pod, but it will be at least a few months before we build the next one while we wait for the cost per terabyte of the 8TB drives to come down. Or maybe we’ll just wait for the newly announced HGST 10TB drives—perhaps HGST will loan us 45 drives for a few years so we can test them…