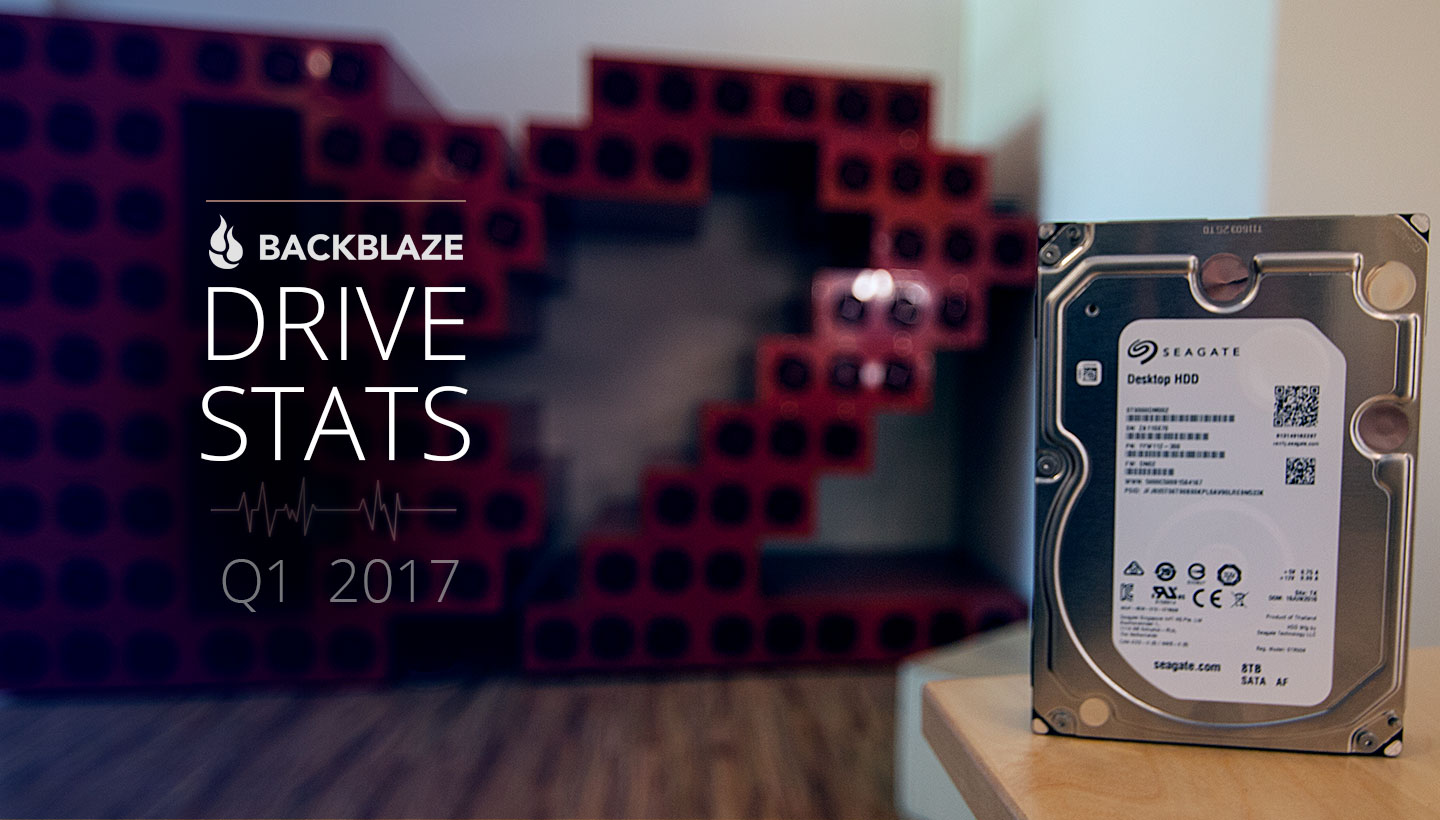 In this update, we’ll review the Q1 2017 and lifetime hard drive failure rates for all our current drive models, and we’ll look at a relatively new class of drives for us—enterprise. We’ll share our observations and insights, and as always, you can download the hard drive statistics data we use to create these reports.

Backblaze has now recorded and saved daily hard drive statistics from the drives in our data centers for over four years. This data includes the SMART attributes reported by each drive, along with related information such a the drive serial number and failure status. As of March 31, 2017 we had 84,469 operational hard drives. Of that, there were 1,800 boot drives and 82,669 data drives. For our review, we remove drive models of which we have less than 45 drives, leaving us to analyze 82,516 hard drives for this report. There are currently 17 different hard drives models, ranging in size from 3TB to 8TB in size. All of these models are 3.5” drives. 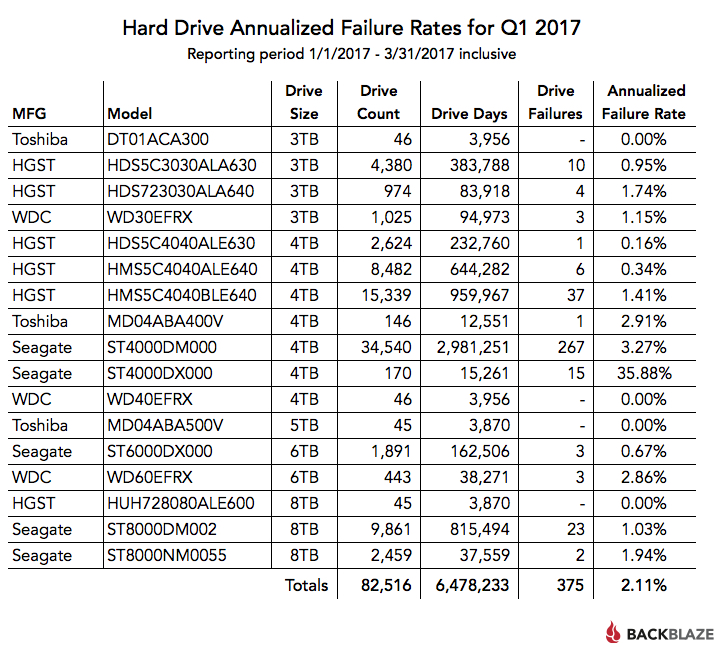 Observations and Notes on the Q1 Review

There were a total 375 drive failures in Q1. A drive is considered failed if one or more of the following conditions are met:

Note: Our stand-alone Storage Pods use RAID-6, our Backblaze Vaults use our own open-sourced implementation of Reed-Solomon erasure coding, instead. Both techniques have a concept of a drive not syncing or staying synced with the other member drives in its group.

The annualized hard drive failure rate for Q1 in our current population of drives is 2.11%. That’s a bit higher than previous quarters, but might be a function of us adding 10,577 new drives to our count in Q1. We’ve found that there is a slightly higher rate of drive failures early on, before the drives “get comfortable” in their new surroundings. This is seen in the drive failure rate “bathtub curve” we covered in a previous post.

The additional 10,577 drives are really a combination of 11,002 added drives, less 425 drives that were removed. The removed drives were in addition to the 375 drives marked as failed, as those were replaced one for one. The 425 drives were primarily removed from service due to migrations to higher density drives.

The table below shows the breakdown of the drives added in Q1 2017 by drive size. 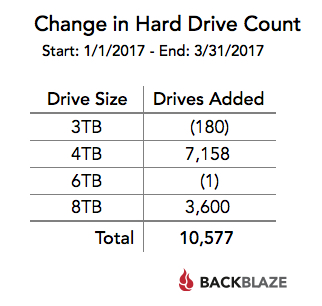 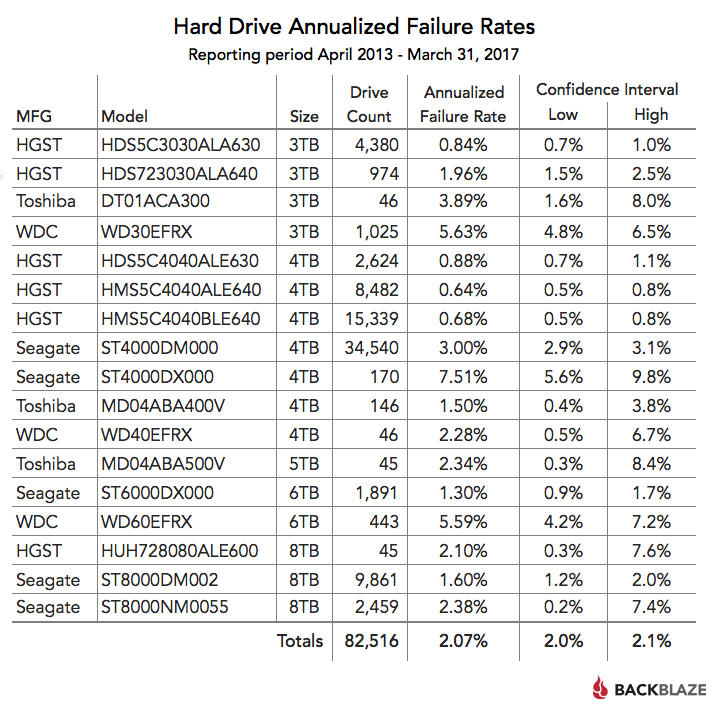 The annualized failure rate for the drive models listed above is 2.07%. This compares to 2.05% for the same collection of drive models as of the end of Q4 2016. The increase makes sense given the increase in Q1 2017 failure rate over previous quarters noted earlier. No new models were added during the current quarter and no old models exited the collection.

Backblaze Is Using Enterprise Drives—Oh My!

Here’s a comparison of the 8TB consumer drives versus the 8TB enterprise drives to date:

What have we learned so far?

While it is great that the enterprise drives can load data faster, drive speed has never been a bottleneck in our system. A system that can load data faster will just “get in line” more often and fill up faster. There is always extra capacity when it comes to accepting data from customers.

We’ll continue to monitor the 8TB enterprise drives and keep reporting our findings.

If you’d like to hear more about our Hard Drive Stats, Backblaze will be presenting at the 33rd International Conference on Massive Storage Systems and Technology (MSST 2017) being held at Santa Clara University in Santa Clara, California from May 15th to 19th. The conference will dedicate five days to computer storage technology, including a day of tutorials, two days of invited papers, two days of peer-reviewed research papers, and a vendor exposition. Come join us.

As a reminder, the hard drive data we use is available on our Hard Drive Test Data page. You can download and use this data for free for your own purpose, all we ask is three things 1) you cite Backblaze as the source if you use the data, 2) you accept that you are solely responsible for how you use the data, and 3) you do not sell this data to anyone, it is free.

Confessions of a Digital Pack Rat: Almost Half a Petabyte and Still Growing
Next Post: Wanted: Content Director