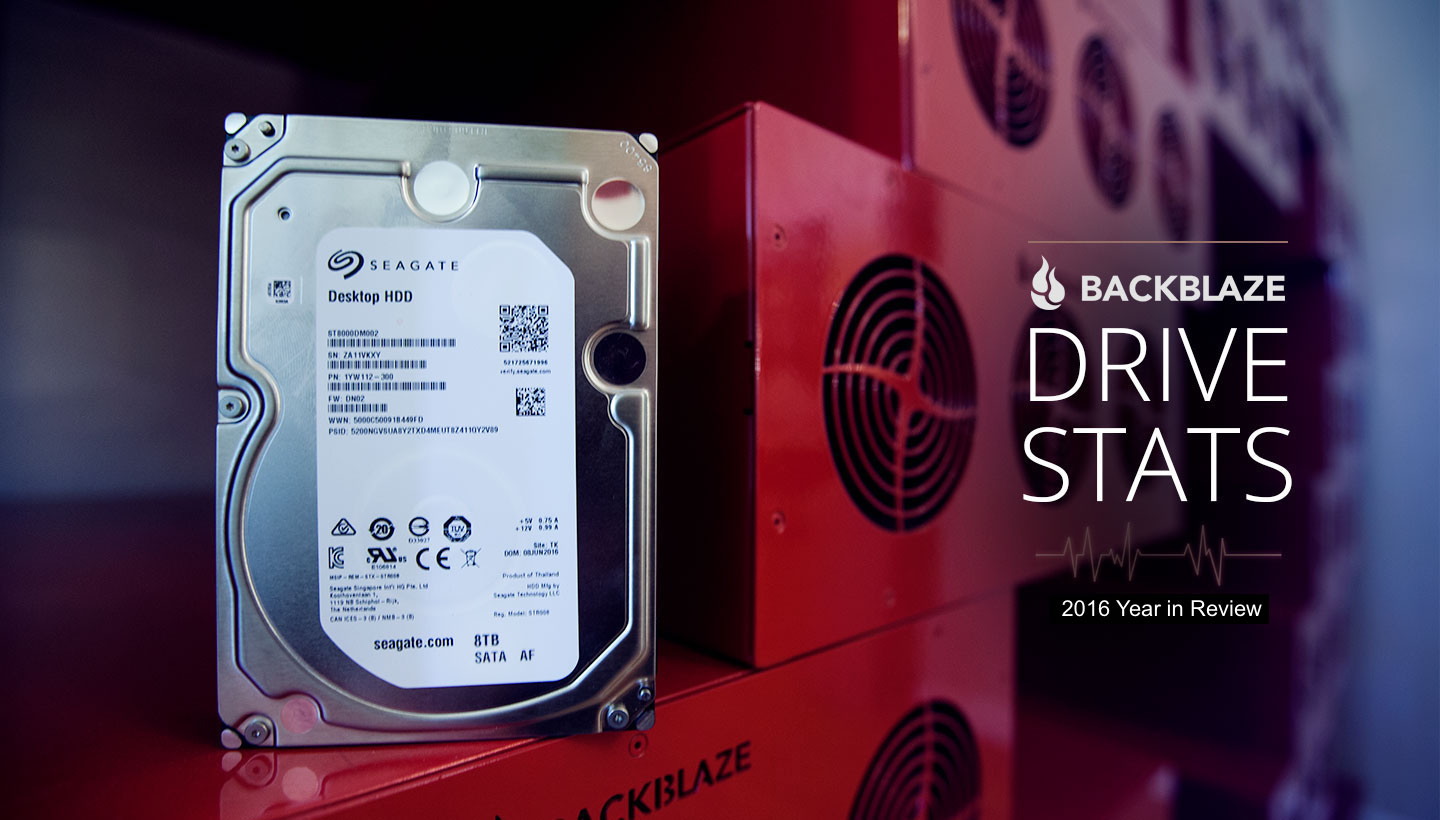 For the most recent hard drive reliability statistics, as well as the raw hard drive test data, visit the Hard Drive Data and Stats webpage.

Backblaze has recorded and saved daily hard drive statistics from the drives in our data centers since April 2013. At the end of 2016 we had 73,653 spinning hard drives. Of that number, there were 1,553 boot drives and 72,100 data drives. This post looks at the hard drive statistics of the data drives we monitor. We’ll first look at the stats for Q4 2016, then present the data for all of 2016, and finish with the lifetime statistics for all of the drives Backblaze has used in our cloud storage data centers since we started keeping track. Along the way, we’ll share observations and insights on the data presented. As always, you can download our hard drive test data to examine and use.

At the end of Q4 2016, Backblaze was monitoring 72,100 data drives. For our evaluation we remove from consideration those drives which were used for testing purposes and those drive models for which we did not have at least 45 drives. This leaves us with 71,939 production hard drives. The table below is for the period of Q4 2016. 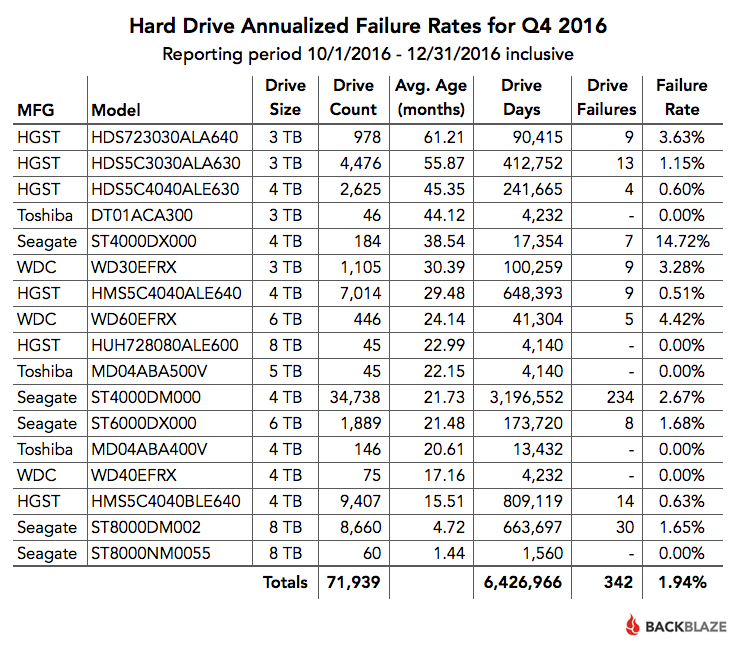 In Q4 2016 we introduced a third 8TB drive model, the Seagate ST8000NM0055. This is an enterprise class drive. One 60 drive Storage Pod was deployed mid-Q4 and the initial results look promising as there have been no failures to date. Given our past disdain for overpaying for enterprise drives, it will be interesting to see how these drives perform.

We added 3,540 Seagate 8TB drives, model ST8000DM002, giving us 8,660 of these drives. That’s 69PB of raw storage, before formatting and encoding, or about 22% of our current data storage capacity. The failure rate for the quarter of these 8TB drives was a very respectable 1.65%. That’s lower than the Q4 failure rate of 1.94% for all of the hard drives in the table above.

During the next couple of calendar quarters we’ll monitor how the new enterprise 8 TB drives compare to the consumer 8 TB drives. We’re interested to know which models deliver the best value and we bet you are too. We’ll let you know what we find. 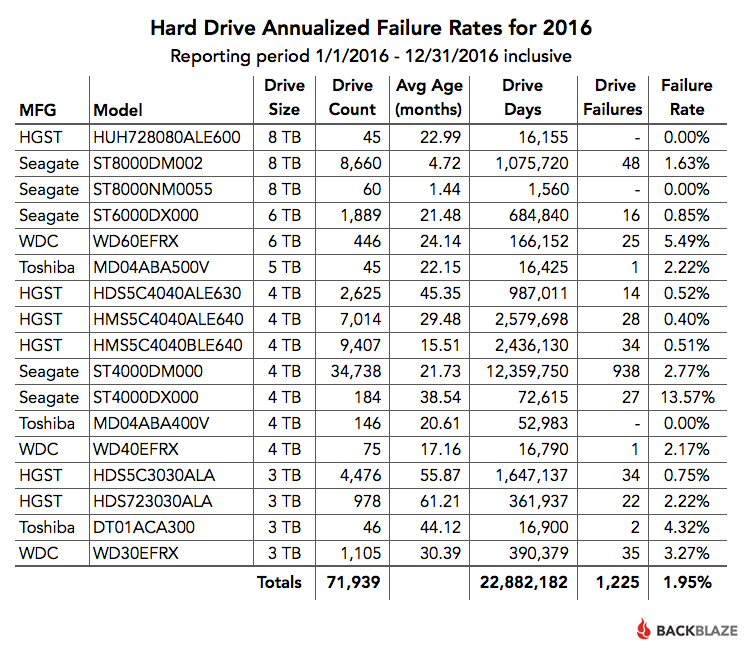 No Time for Failure

In 2016, three drives models ended the year with zero failures, albeit with a small number of drives. Both the 4TB Toshiba and the 8TB HGST models went the entire year without a drive failure. The 8TB Seagate (ST8000NM0055) drives, which were deployed in November 2016, also recorded no failures.

The total number of failed drives was 1,225 for the year. That’s 3.36 drive failures per day or about five drives per workday, a very manageable workload. Of course, that’s easy for me to say, since I am not the one swapping out drives. 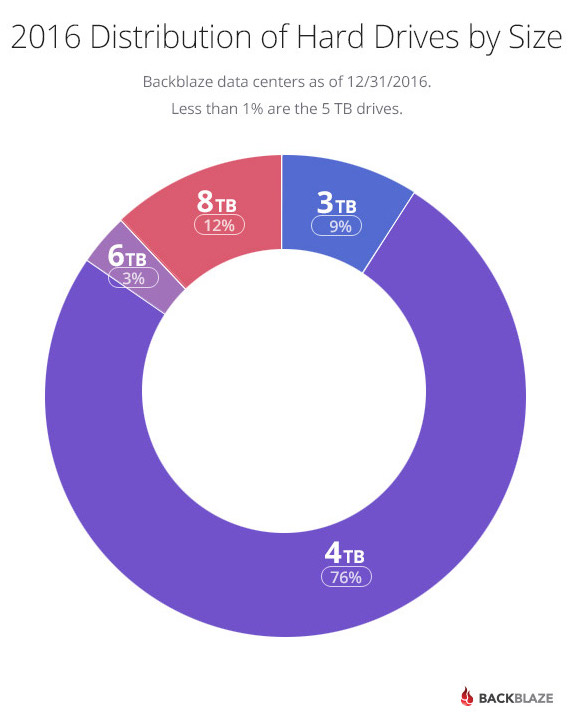 Digging in a little further, below are the failure rates by drive size and vendor for 2016. 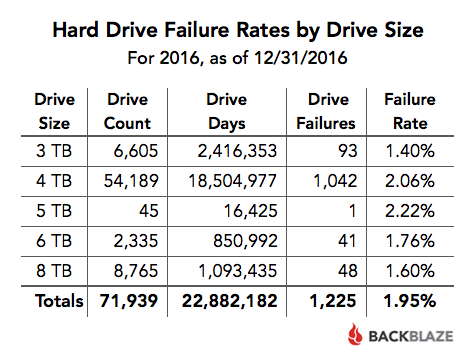 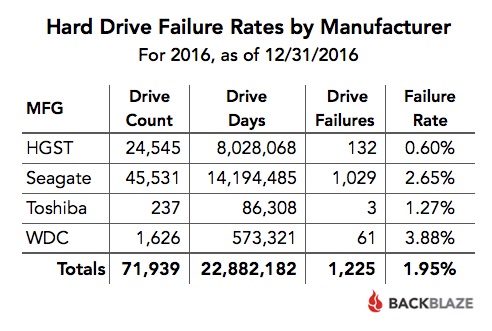 Failure rate, in the context we use it, is more accurately described as the annualized failure rate. It is computed based on drive days and drive failures, not on the drive count. This may seem odd given we are looking at a one year period, 2016 in this case, so let’s take a look.

We start by dividing the drive failures by the drive count. For example, if we use the statistics for 4TB files, we get a failure rate of 1.92%, but the annualized failure rate shown on the chart for 4TB drives is 2.06%. The trouble with just dividing drive failures by drive count is that the drive count constantly changes over the course of the year. By using drive count from a given day, you assume that each drive contributed the same amount of time over the year, but that’s not the case. Drives enter and leave the system all the time. By counting the number of days each drive is active as drive days, we can account for all the ins and outs over a given period of time.

As we noted earlier, we’ve been collecting and storing drive stats data since April 2013. In that time we have used 55 different hard drive models in our data center for data storage. We’ve omitted models from the table below that we didn’t have enough of to populate an entire Storage Pod (45 or fewer). That excludes 25 of those 55 models. 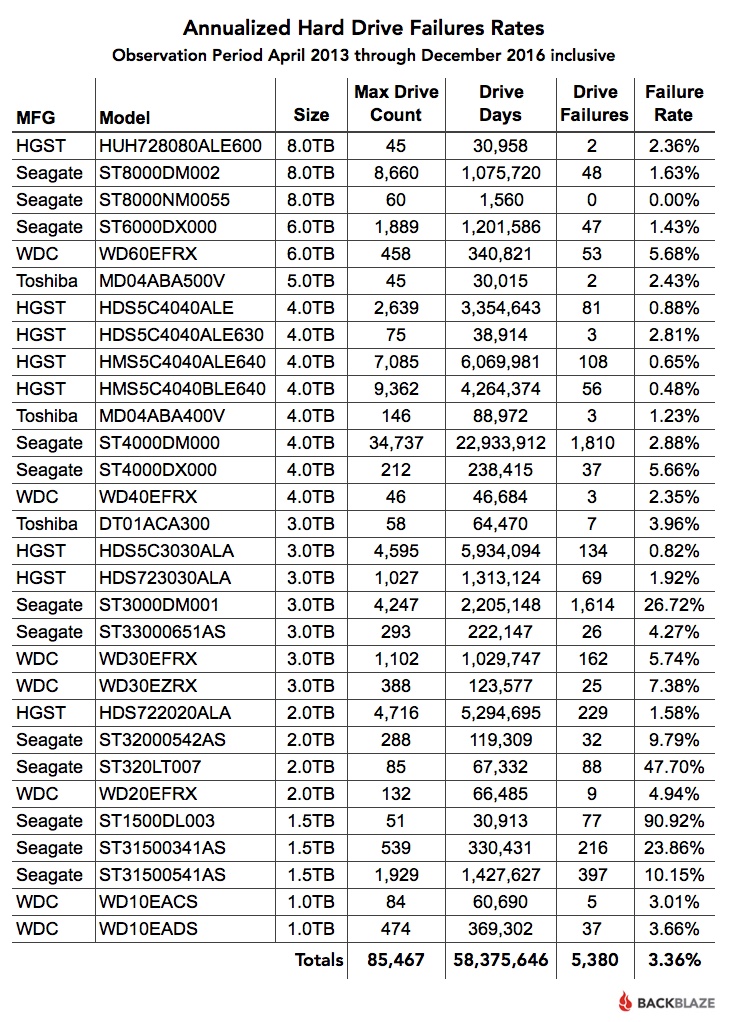 Since April 2013, there have been 5,380 hard drives failures. That works out to about five per day or about seven per workday (200 workdays per year). As a point of reference, Backblaze only had 4,500 total hard drives in June 2010 when we racked our 100th Storage Pod to support our cloud backup service.

You’ll also notice that we have used a total of 85,467 hard drives. But at the end of 2016 we had 71,939 hard drives. Are we missing 13,528 hard drives? Not really. While some drives failed, the remaining drives were removed from service due primarily to migrations from smaller to larger drives. The stats from the migrated drives, like drive hours, still count in establishing a failure rate, but they did not fail, they just stopped reporting data. 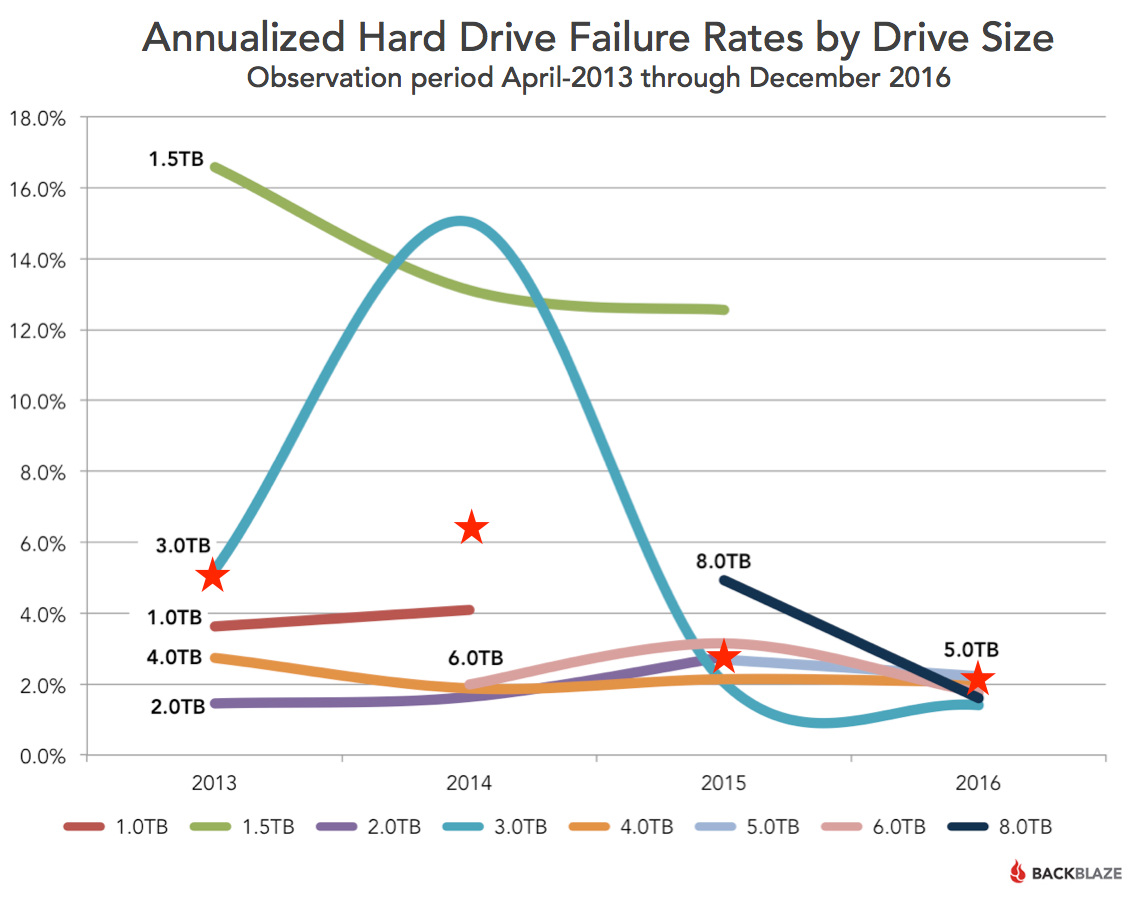 We’ll be presenting the webinar, “Backblaze Hard Drive Stats for 2016,” on Thursday February 2, 2017 at 10 a.m. Pacific time. The webinar will be recorded so you can watch it over and over again. The webinar will dig deeper into the quarterly, yearly, and lifetime hard drive stats and include the annual and lifetime stats by drive size and manufacturer. You will need to subscribe to the Backblaze BrightTALK channel to view the webinar. You can watch the webinar today.

As a reminder, the complete data set used to create the information used in this review is available on our Hard Drive Test Data page. You can download and use this data for free for your own purpose. All we ask is three things: 1) you cite Backblaze as the source if you use the data, 2) you accept that you are solely responsible for how you use the data, and 3) you do not sell this data to anyone, it is free. If you just want the summarized data used to create the tables and charts in this blog post, you can download the ZIP file containing the MS Excel spreadsheet.

Troubleshooting Tips for SSDs
Next Post: Backblaze B2 for Beginners: Inside the B2 Cloud Storage Web interface