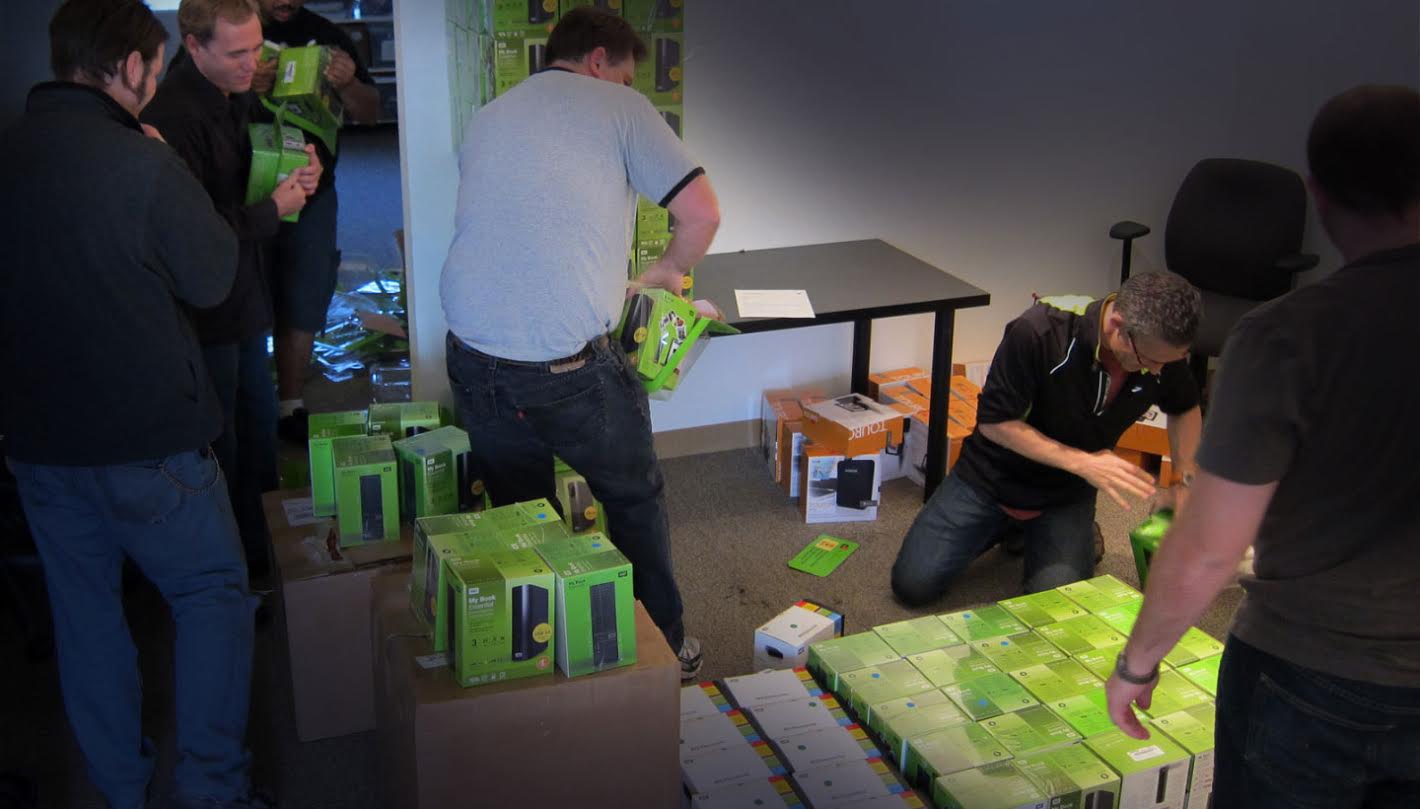 We are two years removed from the horrific flooding that caused the Thailand drive crisis that created a worldwide shortage of hard disk drives. Prices for hard drives spiked and have remained stubbornly high, only returning to pre-crisis levels in the last couple of months. The market and competitive forces that over the past 30 years have predictably driven down the cost per gigabyte of storage took a vacation. During these last two years, Backblaze faced an additional $1 million in data storage costs if we went with the status quo. We didn’t. Instead, here’s what we did.

In the last 30 years, the cost for a gigabyte of storage has decreased from over $1 million in 1981 to less than $0.05 in 2011. This is evidenced by the work of Matthew Komorowski. In addition, the cost per gigabyte also declined in an amazingly predictable fashion over that time.

Beginning in October 2011, those 30 years of history went out the window.

Since starting our service, Backblaze “worked the curve” to keep our costs low as we committed to providing unlimited online backup for just $5/month. We started building our Storage Pods with 1TB drives moving to 1.5TB, then 2TB, and then 3TB drives as the cost per gigabyte dropped from $0.11 to a little over $0.04 a gigabyte for the hard drives we purchased.

All that changed in October 2011 with the onset of the Thailand drive crisis as seen below which depicts the cost per gigabyte that Backblaze paid for the hard drives we purchased. 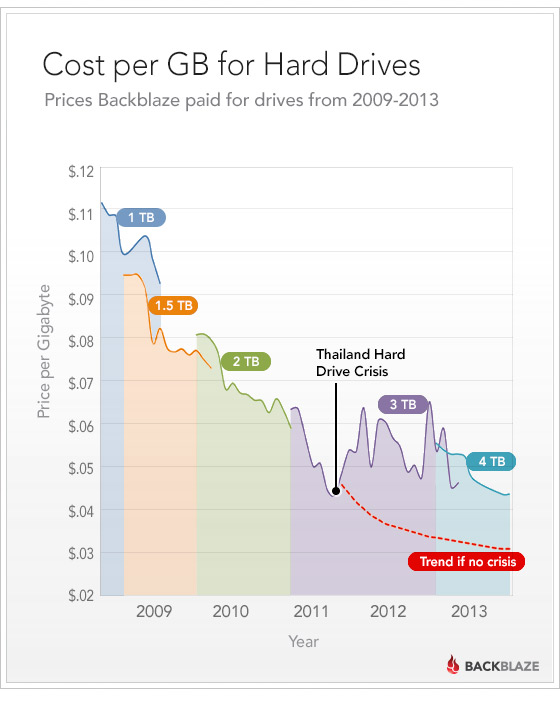 In September 2011, our cost per gigabyte was $0.044. That low water mark would not be achieved again until September 2013. In that two year period, our cost ran as high as $0.064 per gigabyte. While $0.02 per gigabyte doesn’t seem like a lot, Backblaze added about 50 petabytes of storage during that period. When you do the math, a $0.02 increase per gigabyte would translate to a $1 million increase in storage costs, but that’s not the whole story…

When we looked at the effect of the drive crisis on Backblaze, we considered three states:

The chart below visualizes these three states over the time period of the drive crisis. 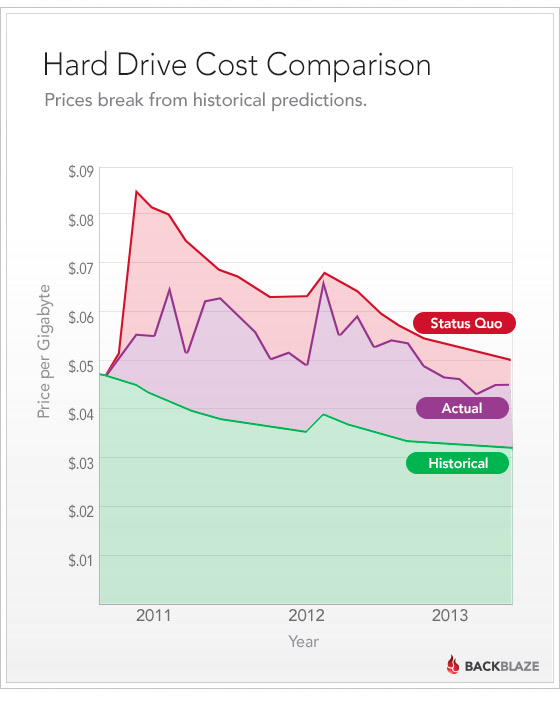 Prior to the drive crisis, Backblaze almost exclusively purchased Hitachi 3TB Internal drives (Model: 0S03230). In September 2011, we could get these Hitachi hard drives for about $130 each ($0.044 per gigabyte). In November 2011, our cost for the same drive was $249 each ($0.083 per gigabyte), 88% higher, and they were really hard to find. Availability and prices varied over the next several months until the model of the Hitachi drives we were buying disappeared entirely with no suitable substitute from Hitachi.

Beginning in October 2012, Backblaze transitioned from using 3TB drives to using 4TB drives in our Storage Pods. As in the past, moving to a higher density drive leads to a temporary increase in the cost per gigabyte of the hard drive cost. The switch to 4TB drives is seen as a jump in cost per gigabyte from October through December 2012.

Using the data from the chart above we can determine the costs for the “Status Quo,” “Reality,” and “Historical” trend lines from October 2011 through September 2013.

If we had done nothing (Status Quo) these last two years, we would have spent $1.14 million more for hard drives versus their expected (Historical) cost. In reality, the actions we took in the wake of the drive crisis “saved” Backblaze about $610,000. These actions included:

What Else Could We Have Done?

We had other paths of action we could have taken when the drive crisis hit:

In the end we did none of the above, instead choosing to shoulder the responsibility ourselves by doing drive farming, “shucking” external drives, and changing drive manufacturers so we could keep with our commitment to $5/month unlimited online backup.

Is It Over Yet? 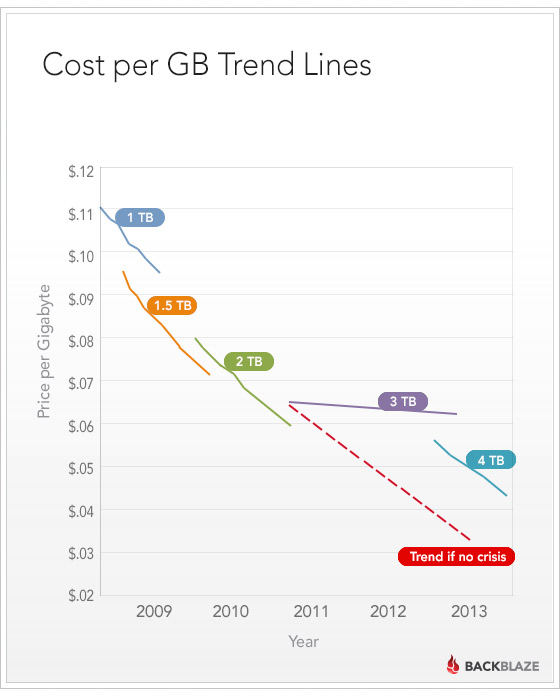 When the drive crisis started, industry pundits estimated that the hard drive market would take anywhere from three months to one year to recover. No one guessed two years. Was the delay simply an issue in rebuilding and/or relocating the manufacturing and assembly facilities? Did the fact that the two industry leaders, Seagate and Western Digital, had to integrate large acquisitions slow down the recovery and subsequent innovation? What about the dramatic shift towards tablets and away from desktops and laptops, has that changed the hard drive market and the declining cost per gigabyte trend line forever?

Whatever lies ahead, we’ll adapt. “SSD Farming,” anyone? Just kidding, for now…