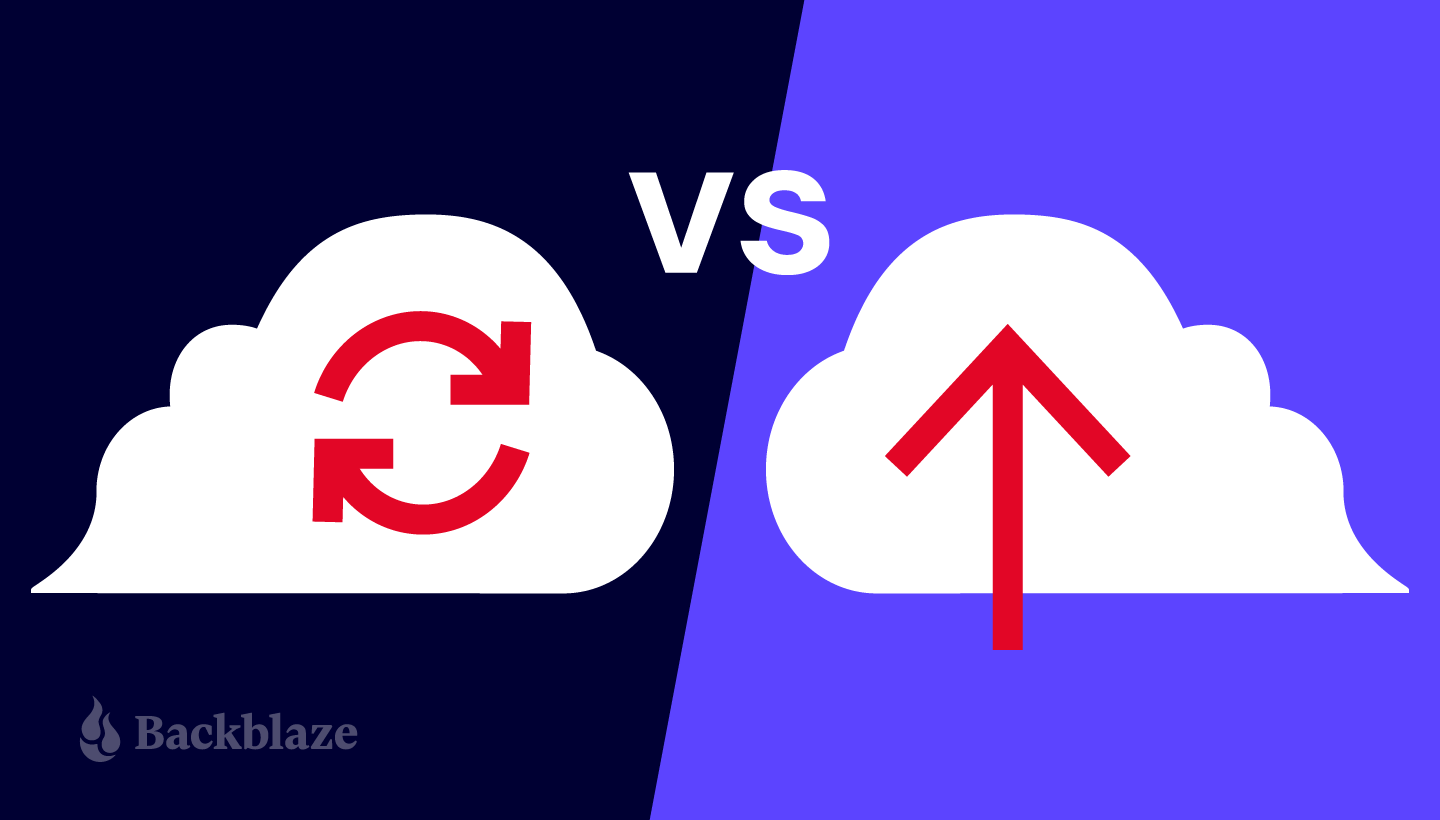 This post was originally published in 2019 and has since been updated with new information. Read on for the latest guidance on the difference between cloud sync vs. cloud backup.

Sync vs. backup: It’s a face-off we’re asked about a lot. Which is best to use, and what makes them different? But from our perspective, the “versus” should really be a “plus,” as the two are complimentary.

Having the right tool for the right job is something any building contractor will tell you is imperative, and the same guiding principles apply to computer usage. As it happens, using both sync services (from platforms like Dropbox, Google Drive, OneDrive, etc.) and backup services (like our very own Backblaze Computer Backup) for your Mac or PC is now a computing best practice. But there’s still confusion about what these services do, and that leaves some users in a vulnerable state.

Since we’re in the business of protecting people from data loss, we wanted to offer a little more information about the differences and similarities of sync and backup, so that you can make the best, most informed decision about how to adequately protect your data using either or both service types.

Sync vs. Backup: What’s the Diff?

When considering sync and sharing services like Dropbox, Google Drive, OneDrive, or the slew of other options, people often assume they act as a backup solution as well. The word “cloud” only adds to this confusion, leading people to believe that all “cloud” services are doing the same thing.

Refresher: What Is the Cloud?

The cloud is still a term that causes a lot of confusion, both about what it is and how services utilize it. Put simply, the cloud is a set of computers that someone else is managing on the customer’s behalf. These computers (typically called servers, or in Backblaze’s case, Storage Pods) typically live in large buildings known as data centers, where they are fed a constant supply of power, are kept in environmentally controlled rooms, and are connected to each other with incredibly fast networking equipment. That networking equipment also connects these data centers to the outside world, where customers can interact with the service providers inside the data centers.

The cloud is perfect for sync and backup services, because they both require a lot of space (in the form of servers) to store the data that is being synced or backed up, and a lot of bandwidth (all of that networking equipment) to make sure that data flows to and from the services rapidly. But, while both types of services require similar infrastructure, they are very different in how they function.

What Is Cloud Sync?

Services like Dropbox, iCloud Drive, OneDrive, Google Drive sync (short for “synchronize”) folders on your computer or mobile device to folders on other machines or into the cloud, allowing users to access a file, folder, or directory across different devices.

What this means is that you can access a file via a sync service on your computer at home in the morning, make changes, then head to work or a friend’s house and access the same file with all those changes that were made on the other computer. You can also share that file with another user and they can make changes from their computer, which will in turn appear on yours. In either scenario, the file is always synced no matter where you access it from.

The Problem With Cloud Sync

While cloud sync is great for giving you 24/7 access to your files and enabling collaboration, it is not a trustworthy backup solution. Here’s why:

We often hear people say, “I don’t need backup. I use Dropbox.” But, that’s an assumption to leave in the past. Where sync services ensure that a certain set of data is the same across multiple devices, backup ensures that all or most of the data on one device is backed up elsewhere. In this case, “elsewhere” is the cloud.

What Is Cloud Backup?

Backup services like Backblaze Computer Backup and Carbonite typically work automatically and in the background of a person’s computer, backing up new or changed data that is on your computer to another location. For the majority of backup services, there is not much configuration involved and there is usually a fixed price (no tiering) for the service. In the event of a computer crash or data loss, all backed up files are available for recovery.

For the most part, backup services catalog and save the most recent version of all data, but many cloud backup services now offer features like Extended Version History, which helps recover files from past points in time. If you happen to accidentally delete or overwrite files without noticing it, or realize that an earlier version of a file is more useful than the currently saved version, you can recover that older work.

A Note on Backups: Before the cloud became an available and popular destination, the most common way to back up was primarily to a tape, a CD, or an external hard drive. As the cloud became more readily available and affordable, it quickly became the most popular off-site storage medium because it eliminated the need for manual backups by automating the process. Automation makes backing up much easier and more reliable.

Which Backup Service Is Right for You?

First of all, a backup best practice is to use a 3-2-1 backup strategy. A 3-2-1 strategy means having at least three total copies of your data, two of which are local (or quickly accessible) but on different media (e.g., an external hard drive in addition to your computer’s local drive), and at least one copy off-site. A good way to think about this is a setup where you have data (files) on your computer, a copy of that data on a hard drive that resides somewhere not inside your computer (commonly on your desk), and another copy with a cloud backup provider.

Following data best practices is similar to investing. You want to diversify the locations where copies of your data live to decrease the likelihood of losing your data. That is why services like Backblaze Computer Backup are a great complement to other services, like Time Machine, iCloud, Dropbox, and even the free tiers of cloud storage services.

What Is the Difference Between Cloud Sync and Backup?

Sometimes it helps to have a real-world example, so let’s take a look at some sync setups that we see fairly frequently.

Example 1: Users have one folder on their computer that is designated for Dropbox, Google Drive, OneDrive, or a similar sync tool. Users save or place data into that folder when they want the data to appear on other devices. Often, they are using the free tier of the syncing and sharing services and only have a few gigabytes of data uploaded in them. This is the most common example that we see and works great for people who simply want to have a little bit of data accessible across many of their devices.

Example 2: Users pay for a higher tier of Dropbox, Google Drive, OneDrive, etc., and essentially use those services as their Documents folder, meaning they primarily work out of that one folder. Files in that folder are available across devices, however, files outside of that folder (e.g., living on the computer’s desktop or anywhere else) are not synced or stored by those syncing and sharing services.

What both examples are missing is the backing up of any photos, movies, videos, or anything else among the rest of the data on their computer. That’s where cloud backup providers shine. They automatically back up user data with little or no setup, and no need for dragging and dropping files into specific, synced folders.

If Backblaze Computer Backup is added to this example, its application scans the hard drive(s) to find all the user’s data, regardless of where it might be stored. This means that all the user’s data is kept as a backup in the Backblaze cloud, including the data synced by sync services like Dropbox, iCloud Drive, Google Drive, or OneDrive, as long as that data resides on the computer.

Beyond just where and how your data is stored, it’s important to consider how easy it is to get your data back from all of these services. With sync and share services, retrieving a lot of data, especially if you are in a high-data tier, can be cumbersome.

Generally, the sync and share services only allow customers to download files over the internet. If you are trying to download more than a couple gigabytes of data, this process can take time and can be fraught with errors. If the process of downloading from your sync and share service will take three days, one thing to consider is having to keep the computer online the entire time or risk an error if the download were to get interrupted. One thing to be wary of with syncing and sharing services is that if you are sharing your folders or directories with others and they add or remove files from shared directories, they will also be added or removed from your computer as well.

Cloud backup services enable you to download files over the internet, too, and can also suffer from long download times. At Backblaze, we never want our customers to feel like we’re holding their data hostage. That is one of the reasons why we have a lot of restore options, including our Restore Return Refund policy, which allows people to restore their data via a USB hard drive and then return that drive to us for a refund. Cloud sync providers typically do not provide this capability.

One popular data recovery use case we’ve seen when a person has a lot of data to restore is for that user to download just the files that are needed immediately, and then order a USB hard drive restore for the remaining files that are not as time sensitive. The user gets all their files back in a few days and their network is spared the download charges.

The bottom line is that all of these services have merit for different use cases. For additional information, you can see a comparison of online backup and cloud storage services on this page.

Have questions about which service is best for you? Sound off in the comments below!

SSD 101: How to Upgrade Your Computer With an SSD
Next Post: System Maintenance Update: Log4j Vulnerability