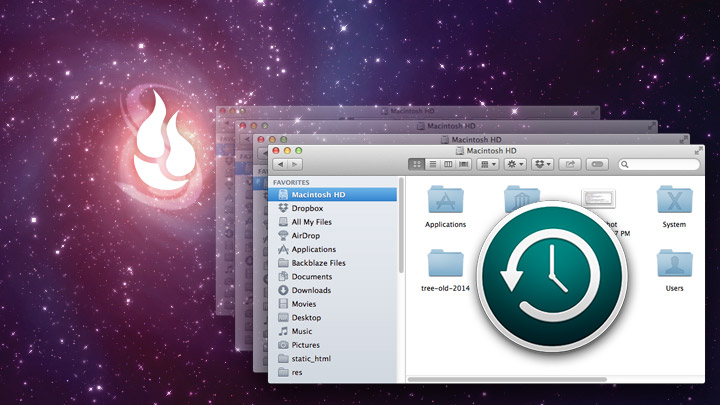 “Why do I need online backup if I have Time Machine already?” We get that question a lot. Here, we recommend you use both. Backblaze strongly believes in a 3-2-1 backup policy. What’s 3-2-1? Three copies of your data, on two different media, and one copy off-site. If you have that baseline, you’re in good shape. The on-site portions of your backup strategy are typically the original piece of data, and an external hard drive of some sort. Most of our Mac customers use Time Machine, so that’s the one we’ll focus on here.

Apple did a great job with Time Machine, and with building awareness for backups. When you plugged in your first external hard drive, your Mac would ask if you wanted to use that drive as a Time Machine backup drive, which was instrumental in teaching users about the importance and potential ease of backups. It also dramatically simplified data backup, making it automatic and continuous. Apple knew that having people manually drag and drop files into folders and drives so they were backed up was not a reliable backup strategy. By making it automatic, many people used Time Machine for their local backup, but this still left a hole in their backup strategy; they had nothing off-site.

Having an off-site backup comes in handy when your computer and local backup (Time Machine in this case) are both lost. That can occur because of fire, theft, flood, forgetfulness, or a wide variety of other unfortunate reasons. Stories of people neglecting to replace their failed Time Machine drive, then having their computer crash, are well known. An off-site backup that is current, such as an automatic online backup, can also be used to augment the local Time Machine backup, especially when traveling. For example, your hard drive in your laptop crashes while you’re on vacation. Time Machine can be used to recover up to the point where you left for your trip and your online backup can be used to fill in the rest.

One thing about using Time Machine is that as a hard drive, it doesn’t scale with the amounts of data that you have. When you purchase a 500GB drive, that’s all the space you have for your backup. For example, if you have your Mac Pro or MacBook and have a Time Machine hard drive connected to it, it will back up the data that’s on the computer. If you add an additional hard drive in to the mix as a storage drive, the Time Machine drive may not be large enough to handle both data sets, from the Mac and from the additional storage. So the more data you accumulate, the larger the Time Machine drive you have to use.

Additionally, if you store data on your Time Machine drive itself, those files are not actually going to be included in the Time Machine backup, so be wary! Apple and Backblaze strongly recommend using a separate, dedicated drive for your Time Machine backup, and not keeping any original data on that drive. That way, if the drive fails, you only lose one copy, and avoid potentially losing both copies. Backblaze works similarly and because you have an off-site backup with Backblaze, it’s another layer of protection from data loss.

So, use both! And if you’re on a PC, use an external hard drive as your second media type (most come with their own local backup software). There’s no such thing as too many backups. Backing up is like a retirement or stock portfolio, the more diversification you have, the less vulnerability you have!

There’s No “I” in Bryan
Next Post: Thank You!