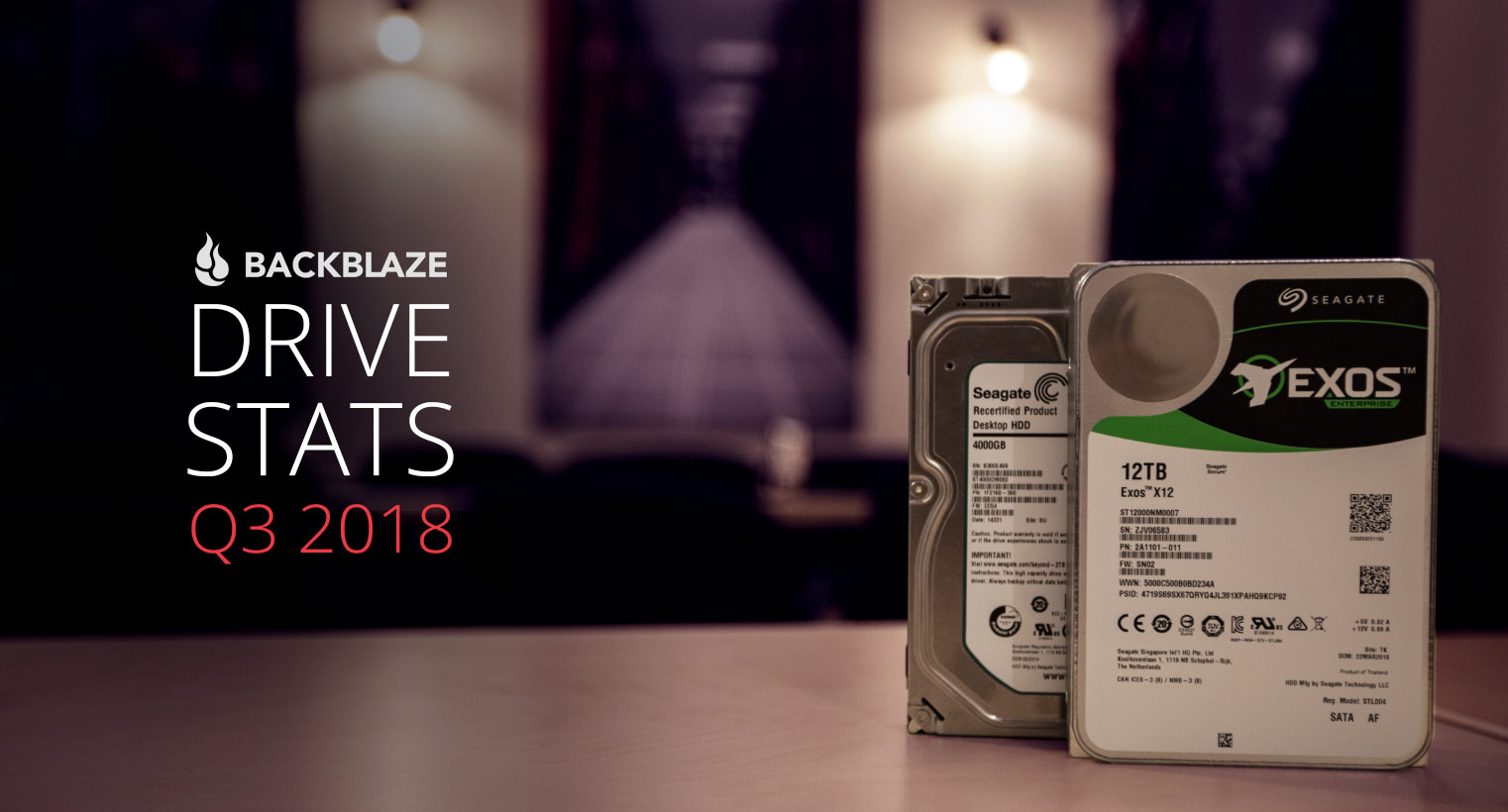 As of September 30, 2018 Backblaze had 99,636 spinning hard drives. Of that number, there were 1,866 boot drives and 97,770 data drives. This review looks at the quarterly and lifetime statistics for the data drive models in operation in our data centers. In addition, we’ll say goodbye to the last of our 3TB drives, hello to our new 12TB HGST drives, and we’ll explain how we have 584 fewer drives than last quarter, but have added over 40 petabytes of storage. Along the way, we’ll share observations and insights on the data presented and we look forward to you doing the same in the comments.

At the end of Q3 2018, Backblaze was monitoring 97,770 hard drives used to store data. For our evaluation, we remove from consideration those drives that were used for testing purposes and those drive models for which we did not have at least 45 drives (see why below). This leaves us with 97,600 hard drives. The table below covers what happened in Q3 2018. 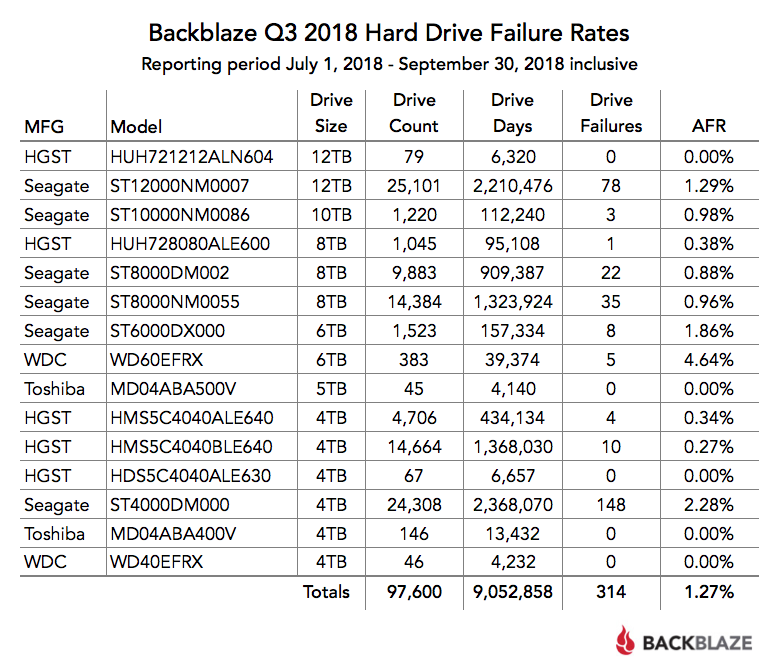 When to Replace a Hard Drive

As noted, at the end of Q3 that we had 584 fewer drives, but over 40 petabytes more storage space. We replaced 3TB, 4TB, and even a handful of 6TB drives with 3,600 new 12TB drives using the very same data center infrastructure, i.e. racks of Storage Pods. The drives we are replacing are about 4 years old. That’s plus or minus a few months depending on how much we paid for the drive and a number of other factors. Keeping lower density drives in service when higher density drives are both available and efficiently priced does not make economic sense.

Why Drive Migration Will Continue

Over the next several years, data growth is expected to explode. Hard drives are still expected to store the bulk of that data, meaning cloud storage companies like Backblaze will have to increase capacity by either increasing existing storage density and/or building, or building out, more data centers. Drive manufacturers, like Seagate and Western Digital, are looking at HDD storage densities of 40TB as early as 2023, just 5 years away. It is significantly less expensive to replace lower density operational drives in a data center versus building a new facility or even building out an existing facility to house the higher density drives.

For the last couple of quarters, we had 180 Western Digital 3TB drives (model: WD30EFRX) remaining — the last of our 3TB drives. In early Q3, they were removed and replaced with 12TB drives. These 3TB drives were purchased in the aftermath of the Thailand drive crisis and installed in mid-2014 and were still hard at work when we replaced them. Sometime over the next couple of years we expect to say goodbye to all of our 4TB drives and upgrade them to 14, 16, or even 20TB drives. After that it will be time to “up-density” our 6TB systems, then our 8TB systems, and so on.

In Q3 we added 79 HGST 12TB drives (model: HUH721212ALN604) to the farm. While 79 may seem like an unusual number of drives to add, it represents “stage 2” of our drive testing process. Stage 1 uses 20 drives, the number of hard drives in one Backblaze Vault tome. That is, there are are 20 Storage Pods in a Backblaze Vault, and there is one “test” drive in each Storage Pod. This allows us to compare the performance, etc., of the test tome to the remaining 59 production tomes (which are running already-qualified drives). There are 60 tomes in each Backblaze Vault. In stage 2, we fill an entire Storage Pod with the test drives, adding 59 test drives to the one currently being tested in one of the 20 Storage Pods in a Backblaze Vault.

To date, none of the 79 HGST drives have failed, but as of September 30th, they were installed only 9 days. Let’s see how they perform over the next few months.

While the quarterly chart presented earlier gets a lot of interest, the real test of any drive model is over time. Below is the lifetime failure rate chart for all the hard drive models in operation as of September 30th, 2018. For each model, we compute their reliability starting from when they were first installed. 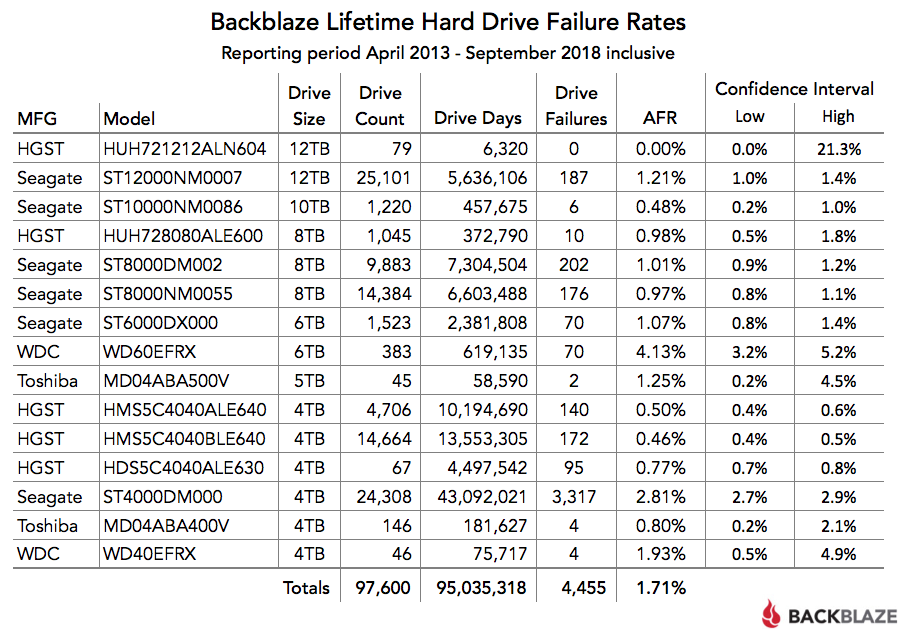 The complete data set used to create the information used in this review is available on our Hard Drive Test Data page. You can download and use this data for free for your own purpose. All we ask are three things: 1) you cite Backblaze as the source if you use the data, 2) you accept that you are solely responsible for how you use the data, and 3) you do not sell this data to anyone. It is free.