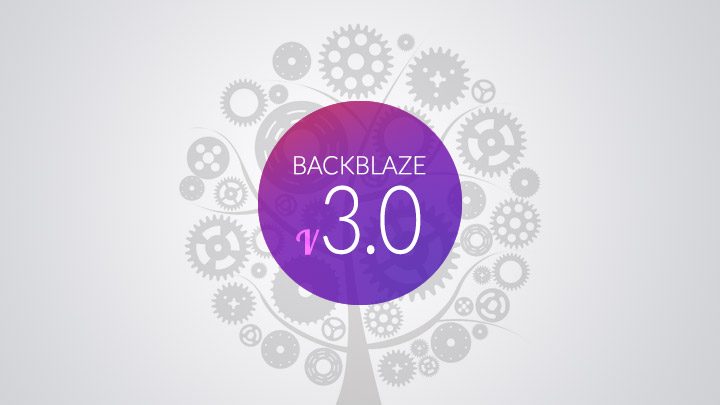 When Backblaze 1.0 was introduced it was a good product that solved a problem. Over the years, many people have used Backblaze to backup and restore billions of files. As with most software there were always things that could be done to improve the product and over time we added features such as Refer-a-Friend, Safety Freeze, Locate My Computer, unlimited file sizes, and many others. Following industry norms, we’d trumpet these new features for all to see by updating the version number to 1.5, 1.6, 2.0, and so on.

Today we are announcing Backblaze 3.0, but in this case there is really nothing for our customers to see—there are no UI (user interface) changes. There are plenty of changes however; massive changes actually, which will affect nearly every Backblaze customer over time. There are changes to the Mac and Windows applications, changes to the back-end servers, changes to our Storage Pod software, and more. All of these changes are behind the scenes and all of these changes will make Backblaze a better and more scalable product, but except for the version number changing to 3.0, there is nothing else to see.

Why call this release Backblaze 3.0 if there are no UI changes? Why not? The idea that only major UI changes are required for a major product version change ignores the contributions of nearly all of our engineers and many of our operations staff. There’s a ton of work in 3.0; here’s an overview of what you’ll never see:

Data center focus: Backblaze 3.0 switched the point of view for data storage from the client to the data center. This allows for more efficient data storage, improved throughput, and faster integrity checking for data stored.

Faster deduplication: If the same file exists on your computer in multiple folders/directories, Backblaze will dedupe the file for backup and restore. We’ve always done this. For 3.0, we’ve basically doubled the speed of the deduplication process. Backups, both initial and incremental, will be faster, especially for someone with lots of duplicated files.

Large-file improvements: Files have continued to increase in size over the years. It is not unusual to have a 3GB video file for example. Such files are broken down into parts before they are encrypted, transferred, and stored at Backblaze. We improved the speed and effectiveness of locating and reassembling these very large files when they need to be restored.

While not visible, this massive internal overhaul enables Backblaze to continue scaling the service for decades to come. The new infrastructure, without any changes, can store approximately 500,000 petabytes of data using today’s 6TB hard drives. That’s more than 4,000 times as much storage as we have today. Call us optimistic.

Cost: Free as an update for all Backblaze customers.

Looking for an Accounting Administrator
Next Post: How Do You Do Source Code Control?