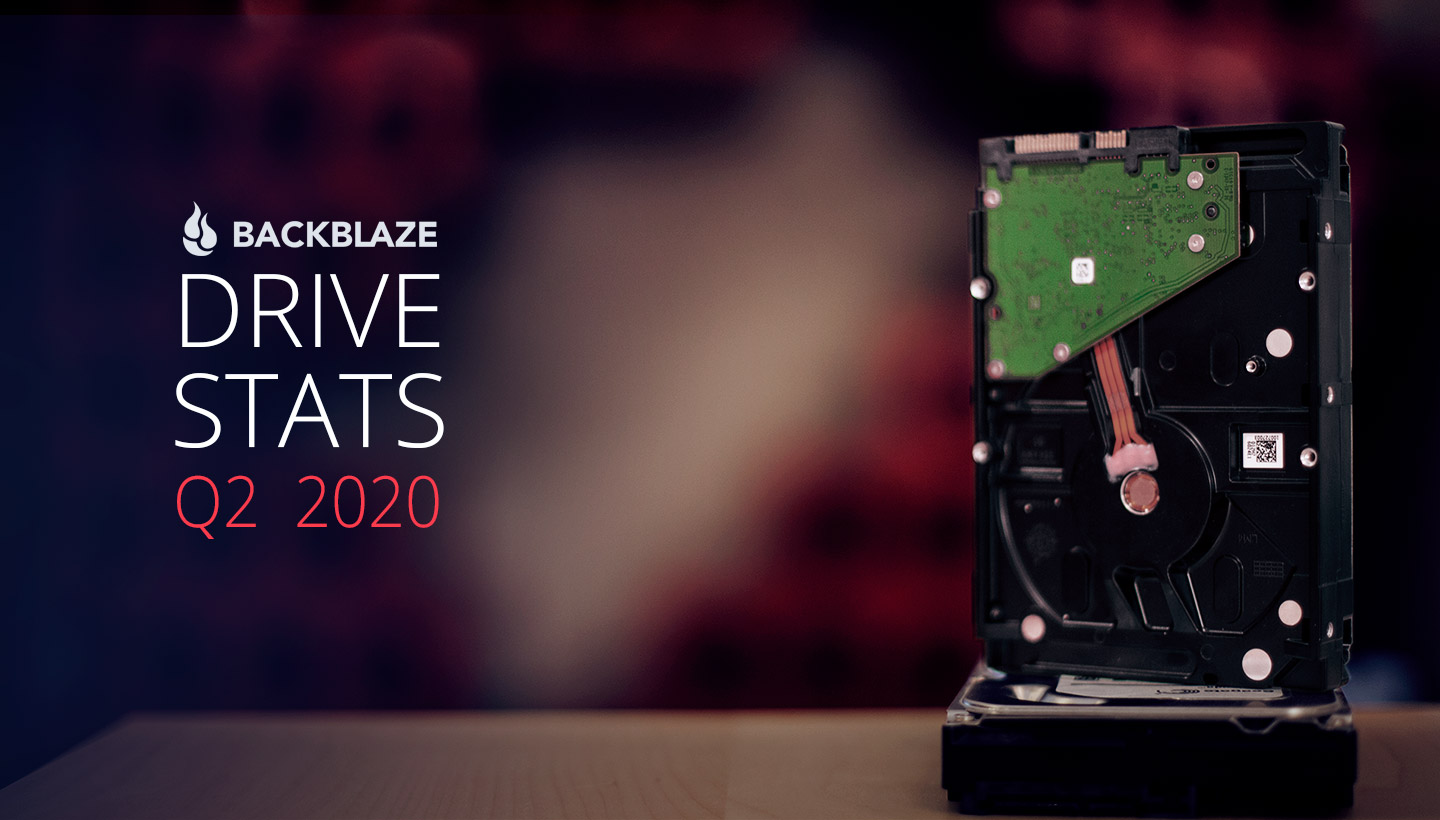 As of June 30, 2020, Backblaze had 142,630 spinning hard drives in our cloud storage ecosystem spread across four data centers. Of that number, there were 2,271 boot drives and 140,059 data drives. This review looks at the Q2 2020 and lifetime hard drive failure rates of the data drive models currently in operation in our data centers and provides a handful of insights and observations along the way. As always, we look forward to your comments.

At the end of Q2 2020, Backblaze was using 140,059 hard drives to store customer data. For our evaluation we remove from consideration those drive models for which we did not have at least 60 drives (see why below). This leaves us with 139,867 hard drives in our review. The table below covers what happened in Q2 2020. 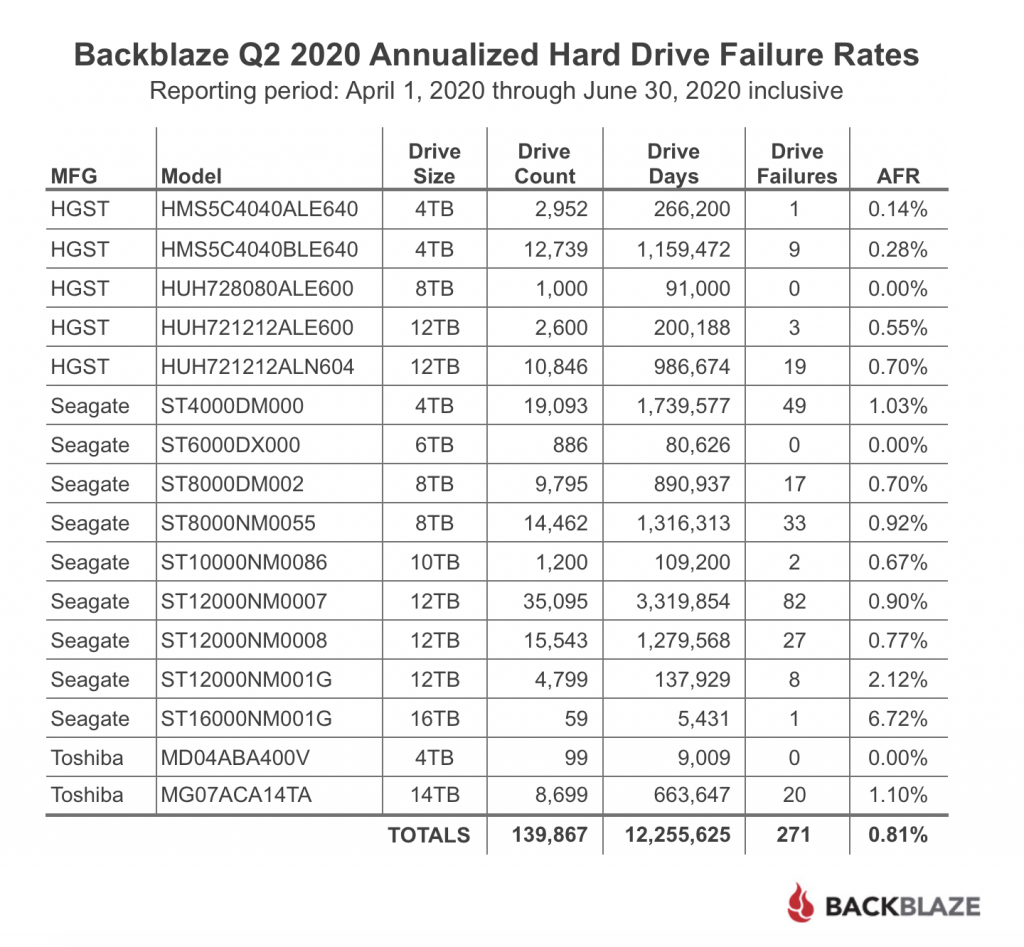 There were 192 drives (140,059 minus 139,867) that were not included in the list above because we did not have at least 60 drives of a given model. For example, we have: 20 Toshiba 16TB drives (model: MG08ACA16TA) we are putting through our certification process. On the other end of the spectrum, we still have 25 HGST 4TB drives (model: HDS5C4040ALE630), putting in time in Storage Pods. Observant readers might note the model number of those HGST drives and realize they were the last of the drives produced with Hitachi model numbers.

Reminiscing aside, when we report quarterly, yearly, or lifetime drive statistics, those models with less than 60 drives are not included in the calculations or graphs. We use 60 drives as a minimum as there are 60 drives in all newly deployed Storage Pods. Note: The Seagate 16TB drive (model: ST16000NM001G) does show 59 drives and is listed in the report because the one failed drive had not been replaced at the time the data for this report was collected.

That said, all the data from all of the drive models, including boot drives, is included in the files which can be accessed and downloaded on our Hard Drive Test Data webpage.

What We Deployed in Q2

We deployed 12,063 new drives and removed 1,960 drives via replacements and migration in Q2, giving us a net of 10,103 added drives. Below is a table of the drive models we deployed. 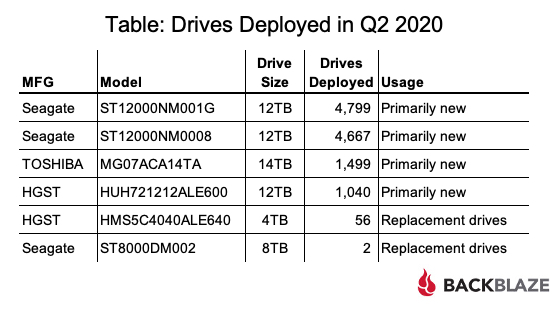 Quarterly data is just that, data for only that quarter. At the beginning of each quarter we wipe out all the previous data and we start compiling new information. At the end of the quarter, we bundle that data up into a unit (collection, bag, file, whatever), and name it; Q2 2020, for example. This is the type of data you were looking at when you reviewed the Quarterly Chart for Q2 2020 shown earlier in this report. We can also compare the results for a given quarter to other quarters, each their own unique bundle of data. This type of comparison can reveal trends that can help us identify something that needs further attention.

The chart below shows the AFR by manufacturer using quarterly data over the last three years. Following the chart is two tables. The first is the data used to create the chart. The second is the count of the number of hard drives corresponding to each quarter for each manufacturer. 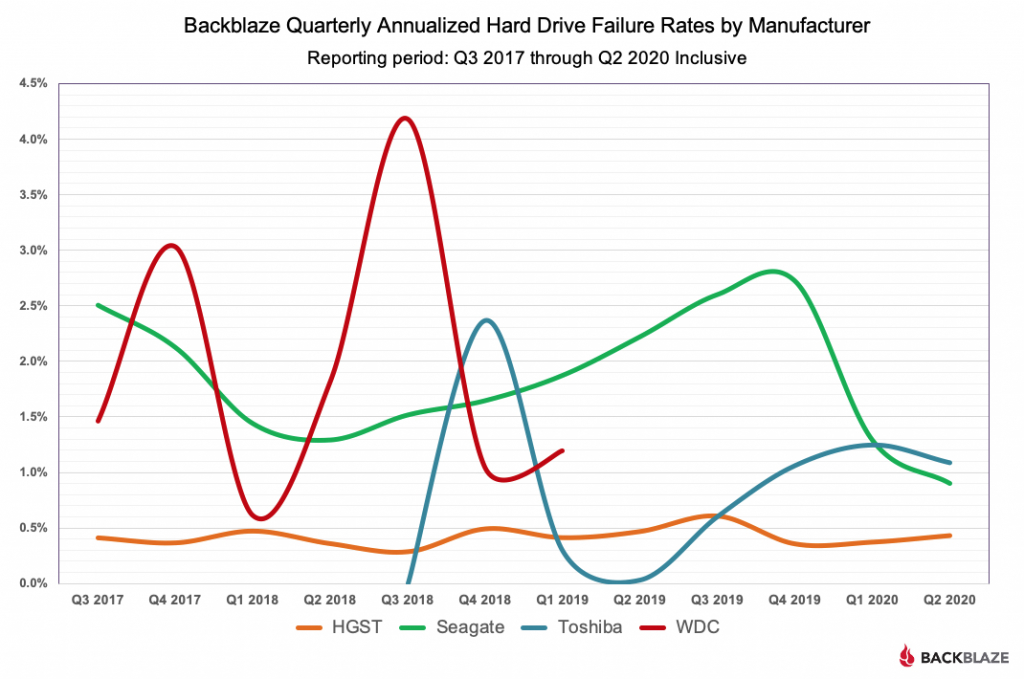 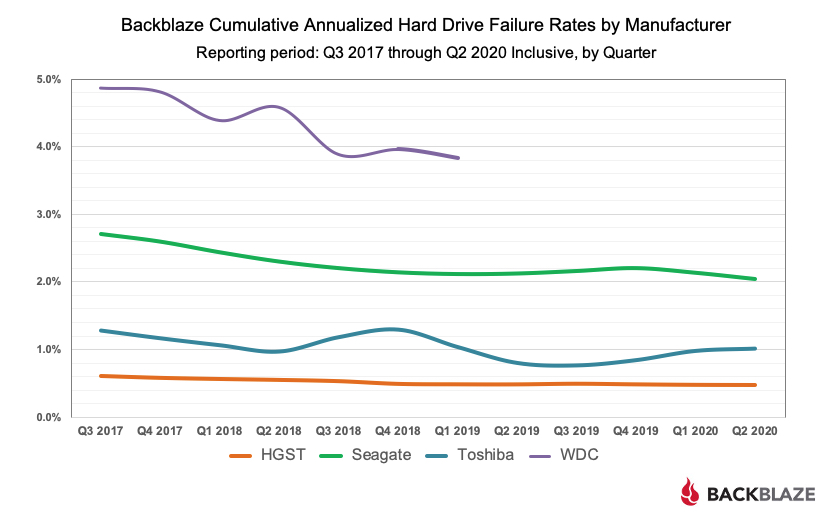 Down and to the Right

For all manufacturers, you can see a downward trend in AFR over time. While this is a positive occurrence, we do want to understand why and incorporate those learnings into our overall understanding of our environment—just like drive failure, drive “non-failure” matters too. As we consider these findings, if you have any thoughts on the subject, let us know in the comments. Maybe you think hard drives are getting better, or is it more likely that we’ve added so many new drives in the last three years that they dominate the statistics, or is it something else? Let us know.

The table below shows the lifetime AFR for the hard drive models we had in service as of June 30, 2020. The reporting period is from April 2013 through June 30, 2020. All of the drives listed were installed during this timeframe. 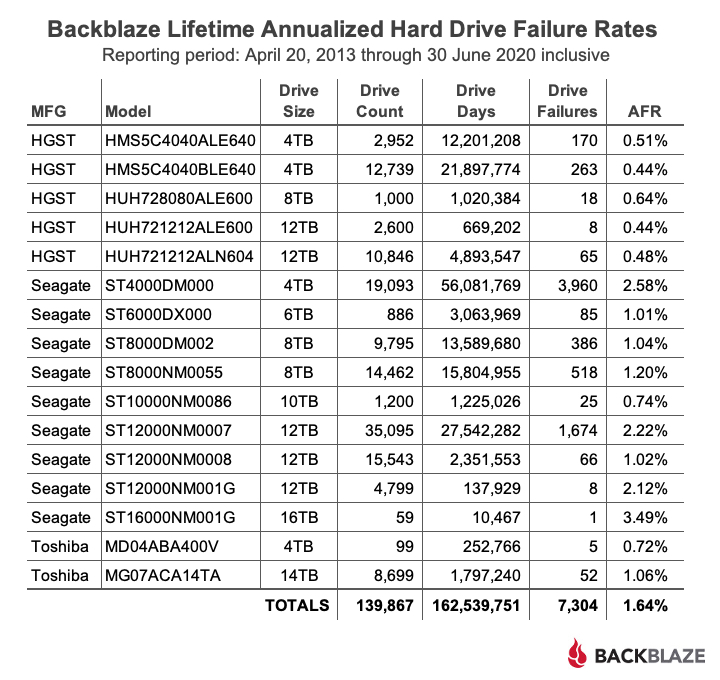 The lifetime AFR was 1.64%, the lowest since we started keeping track in 2013. In addition, the lifetime AFR has fallen from 1.86% in Q2 2018 to the current value, even as we’ve passed milestones like an exabyte of storage under management, opening a data center in Amsterdam, and nearly doubling the size of the company. A busy two years.
The Hard Drive Stats Data The complete data set used to create
All of the Seagate 12TB drives (model: ST12000NM001G) were installed in Q2, so while we have a reasonable amount of data, as a group these drives are still early in their lifecycle. While not all models follow the bathtub curve as they age, we should wait another couple of quarters to see how they are performing in our environment.

The Seagate 4TB drives (model: ST4000DM000) keep rambling along. With an average age of nearly five years, they are long past their warranty period (one or two years depending on when they were purchased). Speaking of age, the drive model with the highest average age on the chart is the Seagate 6TB drive at over 64 months. That same model had zero failures in Q2 2020, so they seem to be aging well.

What Is an API?
Next Post: Backblaze Computer Backup Release 7.0.2