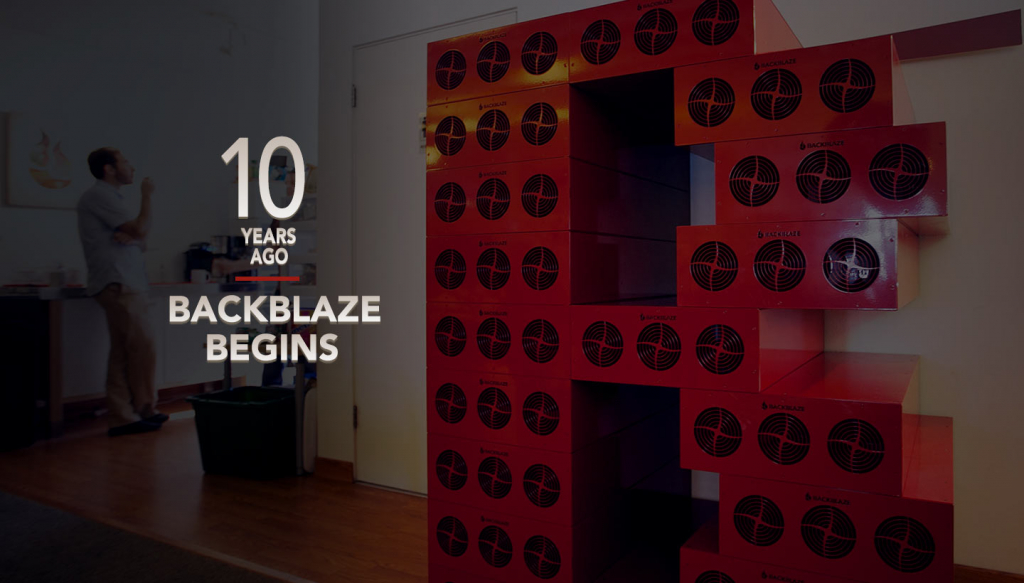 2017 is a milestone year for us at Backblaze: This year is our 10th anniversary. Our official birthday—based on our papers of incorporation—places that date in April. But January 15th was another important date: It’s when the work on what would become Backblaze first started in earnest.

Brian Wilson, our intrepid CTO and CFO, began coding Backblaze full-time on January 15, 2007, in a corner of his living room. Brian had already been coding for a couple of decades, and like our other founders, is a serial entrepreneur. But Backblaze was a bit more personal.

Our guiding philosophy is that backups should be easy, automatic, and affordable.

Brian is known by family and friends to have a pretty elaborate and extensive backup regimen. That expertise would occasionally lead to questions about data backup and recovery. That’s when Jeanine’s computer crashed. She begged Brian for help to recover her files. But without a backup to restore from, Brian couldn’t help.

While Brian felt bad for Jeanine, he quickly realized that this was just the beginning as photos, movies, and personal and work documents were all going digital. Purely digital. And like Jeanine, most people were not backing up their computers. The amount of data that was at risk of being lost was staggering.

Why were so few people backing up their computers? Managing backups can be difficult, especially for people who don’t live on their computers all the time, but still rely on them. And while there were already online backup services, they were confusing, expensive, and required you to select the files you wanted to back up.

So we started Backblaze to solve that impending disaster. Our guiding philosophy is that backups should be easy, automatic, and affordable.

Backblaze caught fire very quickly, if you’ll pardon the pun. By early February we had already begun stringing together a gigabit ethernet network (in Brian’s home) to connect the servers and other gear we’d need to get Backblaze up and running. By early April we had working code. That’s when we called the lawyers and got the letters of incorporation rolling, which is why our “official” birthday is in April. April 20th, 2007, in fact.

So why did we call this new venture Backblaze? Back in 2001, Brian had incorporated “Codeblaze” for his consulting business. “Backblaze” was a nod to that previous effort, with an acknowledgment that this new project would focus on backups. April 20th is our official birthday.

4/20 is familiar to marijuana enthusiasts everywhere. And our birthday is a source of occasional mirth and merriment to those in the know. Sorry to be a buzzkill, but it’s totally coincidental: The great state of Delaware decided on our incorporation date.

It’s interesting how one great idea can lead to another. When Backblaze was still coming together, we thought we’d store backup data using an existing cloud storage service. So we went to Amazon S3. We found that S3 was way too expensive for us. Heck, it’s still too expensive, years later.

So we decided to roll our own storage instead. We called it the Storage Pod. We really liked the idea—so much that we decided to open-source the design so you can build your own if you want to. We’ve iterated it many times since then, most recently with our Storage Pod 6.0. We’re now putting 60 drives in each rack-mounted chassis in our data center, for a total of 480 terabytes of storage in each one.

As our work with Storage Pods continued and as we built out our data center, we realized that we could offer cloud storage to our customers for one-fourth the price that Amazon does. And that’s what led us to start Backblaze B2 Cloud Storage. You’ve enthusiastically adopted Backblaze B2, along with a growing cadre of integration partners.

Ten years later, we’re astonished, humbled, and thrilled with what we’ve accomplished. We’ve restored more than 20 billion files and the Storage Pods in our data center now keep more than 300 petabytes of data. The future is bright and the sky’s the limit. We can’t wait to see what the next 10 years have in store.

CES 2017: Trends for the Tech Savvy to Watch
Next Post: Introducing the New Backblaze Business Backup