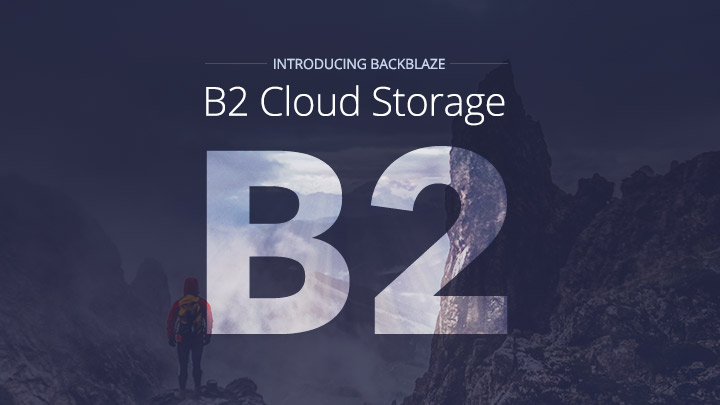 Editor’s note:  On March 9, 2018, Backblaze dropped the price of Backblaze B2 Cloud Storage downloads from $0.02 to $0.01 per GB. See our updated Backblaze B2 Cost Calculator.

Ever since we open-sourced the original Backblaze Storage Pod and shared our storage costs, people have been saying, “I love your backup service, but I need a place to just store data. Can you give me direct access to your cloud storage?” After a year of hard work and tremendous excitement from our team, I’m delighted that today the answer is, “Yes!” We are announcing a brand new service, Backblaze B2 Cloud Storage.

What Is Backblaze B2 Cloud Storage?

B2 Cloud Storage is a service that enables developers, IT people, and everyone else to store data in the cloud. Often referred to as infrastructure as a service (IaaS) or object storage, it provides the ability to store, retrieve and/or share data and scale up and down, while only paying for what you use. Backblaze B2 offers cloud storage similar to Amazon S3, Microsoft Azure storage, and Google Cloud Storage—but at a much lower cost.

This is huge. So huge that we had to say it twice. Not “here’s a cool feature” huge. But “jump up and down huge.” Before getting into all the details, I have to thank the entire team for all of their hard work, late nights and unabashed enthusiasm. There’s nothing like a team yearning to offer an alternative to services from Amazon, Microsoft, and Google and making it a reality. It has been absolutely thrilling to see Backblaze go from a company in a one-bedroom apartment in 2007 to a player on the global IaaS stage.

I also think this is huge for a lot of other people. In 2013 The Verge wrote an article about a company called Everpix titled “Why the World’s Best Photo Startup Is Going Out of Business.” The reason the company vaporized? It was because “a forthcoming bill from Amazon Web Services” was too high. Lower cost cloud storage might have let the company stay in business, employees continue to have jobs, and customers continue to use a photo service they loved.

Everyone needs storage. Everything from artificial intelligence to virtual reality, drones, 3D video, internet of things, live video, connected medicine… All of it needs storage. And lower cost storage means more companies can launch world-changing products and offer better experiences at lower costs and higher margins. It’s a virtuous cycle. And we think that Backblaze B2 can help.

Is Backblaze B2 Like Dropbox, iCloud, or Google Drive?

No, Backblaze B2 is the underlying storage that services such as Dropbox would be built upon. As an example, Dropbox was originally built on Amazon S3.

We know many of you have worked with storage systems for years. We’d love to hear from you on how you think you could use the B2 Cloud Storage service—so please share via the comments!

How Much Does Backblaze B2 Cost?

So here’s the best part: Backblaze B2 costs just $0.005/GB/month to store data. Yes, just ½ a penny. Uploads are free. Downloads are just $0.05/GB. No complicated tiers to track or penalties for accessing your data. See Backblaze B2 pricing.

B2 Cloud Storage charges 3x-30x less than others for cloud storage. We realize that sounds unbelievable—and that’s why we’re so excited. For example, the lowest cost tier of S3 costs $0.022/GB/month. At $0.005/GB/month, Backblaze B2 costs less than one-fourth as much. See the detailed comparison of cloud storage prices.

Yes and no. There are a thousand services offering consumers the ability to store and share files. However, there are only a handful that provide IaaS, the raw storage for developers and IT to leverage through an API or CLI. The list of enterprise cloud storage services includes Amazon S3, Microsoft Azure, Google Cloud Storage, Verizon, Rackspace, and CenturyLink.

How Does This Affect Users of the Backblaze Cloud Backup Service?

This adds a third offering from Backblaze alongside our Backblaze Personal Backup and Backblaze Business Backup services. Those services continue unchanged, offering completely automatic and unlimited cloud backup for just $5/computer/month. Backblaze customers can use their existing Backblaze account to also enable the B2 Cloud Storage service if they wish to store data more permanently in the cloud.

I think it’s critical that as we launch our next big thing, we look back at the very beginning. As some of you know, five of us quit our jobs in 2007 and started Backblaze to try and solve the problem of people not backing up their data. We wanted to make it astonishingly easy and low-cost so that nobody ever lost their precious files again.

While we had raised venture funding for previous companies, we wanted to build Backblaze as a sustainable company with a culture that expected money to come from customers, not VCs. That meant we had to build a profitable business from the beginning. Initially, we planned to use Amazon S3 or equipment from EMC, NetApp, Dell or another vendor for our backend storage. We quickly realized that all of these options were too expensive and we would lose money on every customer.

To solve this problem, we developed and open-sourced our own hardware, the Backblaze Storage Pod, which has been used by organizations across the world for low cost storage. We architected our own cloud storage file system, Backblaze Vaults, a highly scalable and efficient data store. And we have built up processes and gained invaluable experience (such as analyzing about 50,000 hard drives for reliability).

For years we’ve published data about the processes and costs of running our cloud storage. And for years people and companies have asked to us to let them use it. About a year ago, our storage systems were large enough, the tech advanced enough, and the team large enough to pull this off. We’ve spent the last year building APIs, CLI access, the usage and billing systems and more—and now we’re ready to let some of you start to play with it.

Hopefully you’re as excited as we are. Head over to the B2 Cloud Storage page and sign up for an account (it’s free, easy and quick). You’ll be placed on our beta waiting list and not only be among the first to get access to the Backblaze B2 beta, but once you’re accepted, you’ll get 10GB of free storage as well!

What Do You Think?

Obviously, we’re incredibly excited about this next chapter at Backblaze and we can’t wait for you to try the service and give us your feedback! For now, we would love to hear in the comments below:

Eight Highlights in Storage Pod Evolution
Next Post: The B2 Cloud Storage Launch, What’s Next?