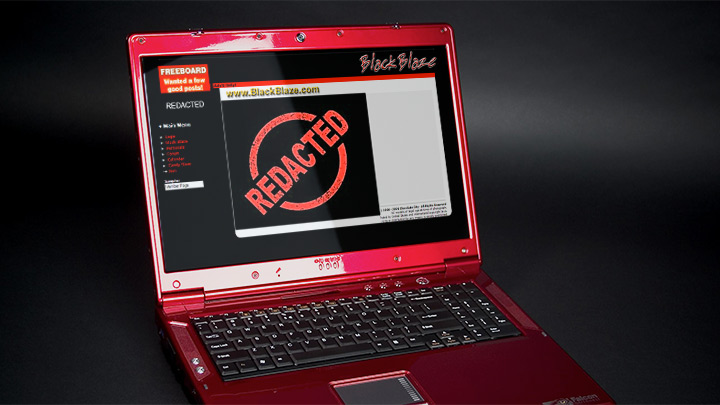 What’s in a Domain Name?

When Brian Wilson (our CTO) co-founded Backblaze, he already had a website called www.codeblaze.com (it was designed in the early 2000s by Casey Jones, who co-founded and designs all things Backblaze). That site had a variety of uses, but the main reason for it was that Brian needed a website so he could get hired as an individual and not through an agency for a job he had back in the day. Why Codeblaze?

…I formed a company named “Codeblaze” in 2001. In that era, all single word URLs were gone, so I spent about 30 minutes figuring out the word “blaze” was not used much, and I was going to write software “code,” and Codeblaze.com was not taken, good enough…

Thus started the “blaze” convention. After co-founding MailFrontier, Brian went on to start working on an online backup project in 2007; that project would later become Backblaze. Why Backblaze?

Same thought process—“back” for “backup your computer” and “blaze” because it has a connotation of fast (and I thought it was funny), so “Backblaze.com” was born.

Sure, it sounds like a fine name, and most of us here are quite fond of it, but if you ask our CTO, Brian:

We still consider the name to be a mistake. It READS okay, but on the phone, or verbally, it is a mess. Something about the alliteration of the “l.”

He’s right. When you say “Backblaze” over the phone or in person, more often than not, if the person is transcribing the conversation or writing down the name, they’ll ask you to repeat it. Or you’ll mispronounce it yourself. In fact, our Marketing team goes through vigorous training to make sure we don’t accidentally say “Backbalze,” “Backblasè,” or more recently, “Blackmaize:”

The name is great, but it just doesn’t roll off the tongue as easily as we would like, which once led to one very peculiar problem.

A few years back, we started noticing folks on social media giggling and saying they’d just gone to what they thought was our site but didn’t quite find the backup service they were expecting. Additionally, people were saying that they couldn’t reach our website because their corporate firewalls were blocking access. We also started getting some emails, asking us why we would post such lewd images to a website that should have presumably been about online backup. We decided to investigate.

It turns out the culprit here was the website “blackblaze.com,” which sounds innocent enough, but unfortunately, this particular site redirected to a “chocolate city.” “That sounds like they make delicious desserts,” you might be thinking. Well, it’s not. In fact it was quite the lascivious website. And when people went there, they weren’t treated to information about online backup, but instead to information about things that we can’t really mention with a straight face, because they aren’t safe for work or this blog. Below is a screenshot of that website from the Internet Archive:

The problem started getting worse once people started hearing about Backblaze on podcasts and as verbal word of mouth started spreading. People were mishearing Backblaze and going to Blackblaze. Not great.

Faced with this embarrassing problem, our CEO, Gleb, reached out to the webmaster of Blackblaze. A lot of times, all you have to do is ask. Similar to how he worked with other backup companies to stop bidding against each other on Google Adwords, the webmaster was willing to part with the Blackblaze domain for just $1,500. Was it worth $1,500 to make sure that people trying to find us did in fact get to the right place? Absolutely. And that URL still sends some traffic our way to this day. Plus, we’ve even made that same error when naming images, like:

See? Even we weren’t immune.

It’s tricky. Of course the perfect URL may not be available, or your company name might be too long to fit comfortably in the confines of an address bar. Whatever the case, choosing a name and how to spell it is very important. Whichever name you choose, think about how folks will be able to find you. If your URL is frgt.com, will folks know where to go if they hear “friget.com?” At a time when the majority of web traffic comes from external links, it’s easy to forget that word of mouth is still an important traffic driver. It might seem like a fairly small thing to consider when founding a company, but believe us, it’s important!

Computer Backup: Pick a Card, Any Card
Next Post: Kelly Joins Us as a Sr. Front-End Developer!