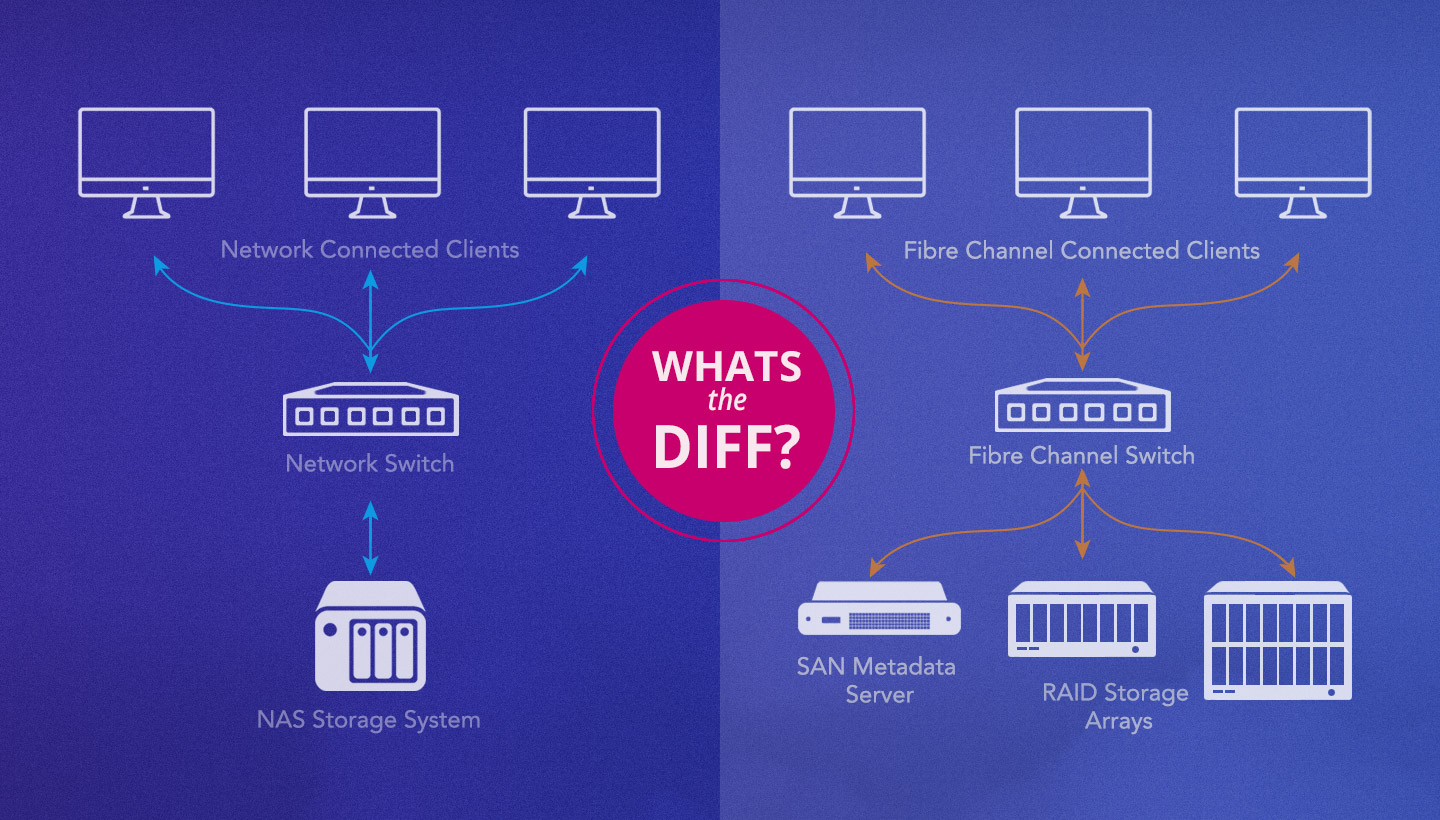 Both network attached storage (NAS) and storage area networks (SAN) were developed to solve the problem of making stored data available to many users at once. Each of them provides dedicated storage for a group of users, but they couldn’t be more different in their approach to achieving their mission.

NAS is a single storage device that serves files over Ethernet and is relatively inexpensive and easy to set up, while a SAN is a tightly coupled network of multiple devices that is more expensive and complex to set up and manage. From a user perspective, the biggest difference between NAS and SAN is that NAS devices deliver shared storage as network mounted volumes and use protocols like NFS and SMB/CIFS, while SAN-connected disks appear to the user as local drives.

In this post, we provide an overview of the differences between NAS and SAN, as well as the kinds of applications they are best suited for to help you in deciding which is right for you.

Basic Definitions: What Is NAS?

NAS is a computer connected to a network that provides file-based data storage services to other devices on the network. The primary strength of NAS is how simple it is to set up and deploy. NAS volumes appear to the user as network mounted volumes. The files to be served are typically contained on one or more hard drives in the system, often arranged in RAID arrays. Generally, the more drive bays available within the NAS, the larger and more flexible storage options you have. The device itself is a network node—much like computers and other TCP/IP devices, all of which maintain their own IP address—and the NAS file service uses the Ethernet network to send and receive files. Although a NAS is usually not designed to be a general-purpose server, NAS vendors and third parties are increasingly offering other software to provide server-like functionality on a NAS.

NAS devices offer an easy way for multiple users in diverse locations to access data, which is valuable when users are collaborating on projects or sharing information. NAS provides good access controls and security to support collaboration, while also enabling someone who is not an IT professional to administer and manage access to the data via an on-board web server. It also offers good fundamental data resiliency through the use of redundant data structures—often RAID—making multiple drives appear like a single, large volume that can tolerate failure of a few of its individual drives.

A NAS is frequently the next step up for a home office or small business that is using external hard drives or direct attached storage, which can be especially vulnerable to drive failure. The move up to NAS is driven by the desire to share files locally and remotely, having files available 24/7, achieving data redundancy, having the ability to replace and upgrade hard drives in the system, and most importantly, supports integrations with cloud storage that provides a location for necessary automatic data backups.

The weaknesses of a NAS are related to scale and performance. As more users need access, the server might not be able to keep up. At this point, you might be able to expand the storage, but most likely it will need to be replaced with a more powerful system with a bigger on-board processor, more memory, and faster and larger network connections. The other weakness is related to the nature of Ethernet itself. By design, Ethernet transfers data from one place to another by dividing the source into a number of segments called packets and sending them along to their destination. Depending on existing network traffic or issues, any of those packets could be delayed or sent out of order, and the file might not be available to the user until all of the packets arrive and are put back in order.

Any latency (slow or retried connections) is usually not noticed by users for small files, but can be a major problem in demanding environments such as video production, where files are extremely large, and latency of more than a few milliseconds can disrupt production such as video editing.

Basic Definitions: What Is SAN?

A SAN is a way to provide users high-performance, low-latency shared access to storage. A SAN is built from a combination of servers and storage over a high speed, low latency interconnect that allows direct Fibre Channel connections from the client to the storage volume to provide the fastest possible performance. The SAN may also require a separate, private Ethernet network between the server and clients to keep the file request traffic out of the Fibre Channel network for even more performance. A SAN is a flexible way to deliver shared storage for a number of users in demanding applications, like video editing or multiple application servers. By joining together the clients, SAN server, and storage on a Fibre Channel network, the SAN volumes appear and perform as if it were a directly connected hard drive. Storage traffic over Fibre Channel avoids the TCP/IP packetization and latency issues, as well as any local area network congestion, ensuring the highest access speed available for media and mission critical stored data.

Because it’s considerably more complex and expensive than NAS, SAN is typically used by large corporations and requires administration by an IT staff. For some applications, such as video editing, it’s especially desirable due to its high speed and low latency.

The primary strength of SAN is that it allows simultaneous shared access to shared storage that becomes faster with the addition of storage controllers. For example, hundreds of video editors can use 10’s GB/s of storage simultaneously. For this reason, SAN is widely used in collaborative video production environments.

The challenge of SAN can be summed up in its cost and administration requirements—having to dedicate and maintain both a separate Ethernet network for metadata file requests and implement a Fibre Channel network can be a considerable investment. That being said, a SAN is often the only way to provide very fast data access for a large number of users that also can scale to supporting hundreds of users at the same time.

When considering NAS or SAN, you might find it helpful to think of it this way: NAS is simple to set up, easy to administer, and great for general purpose applications. Meanwhile, SAN can be more challenging to set up and administer, but it’s often the only way to make shared storage available for mission critical and high performance applications.

Are You Using NAS, SAN, or Both?

If you are using NAS or SAN, we’d love to hear from you about what you’re using and how you’re using them in the comments.