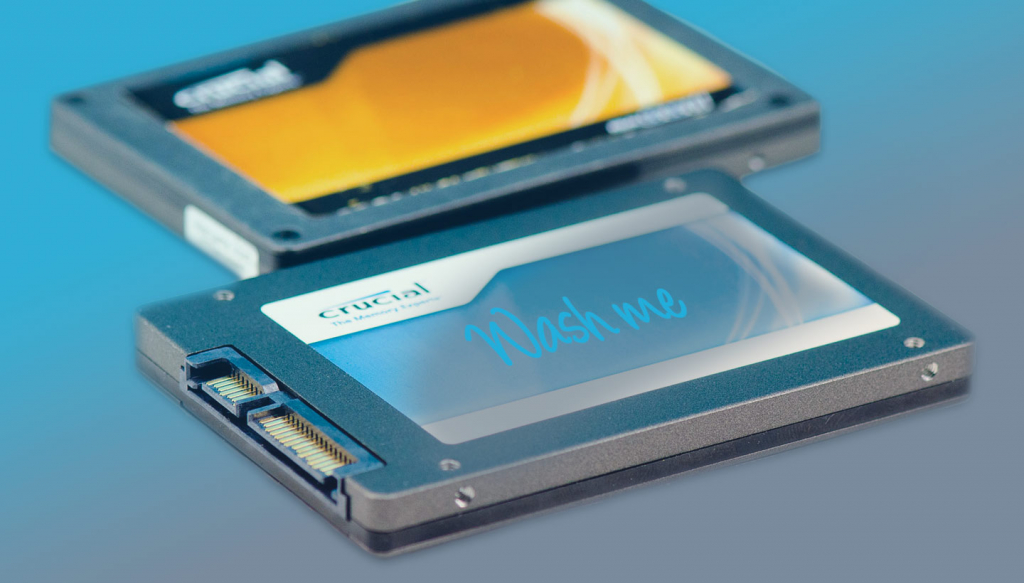 Solid state drives (SSDs) are fast and efficient. More new computers than ever come with them, and many of us have upgraded our existing PCs and Macs to them to get better performance or to replace dead or dying spinning hard drives.

With prices dropping on larger SSDs, those of us who have outgrown our current models are ready to upgrade. What’s more, SSDs die and need to be replaced just like everything else. When it comes time to hand down, recycle, or get rid of your SSD, what do you do? Read on for details.

Don’t Bother Degaussing, Drilling Holes, or “Zeroing Out” an SSD

First, let’s focus on some “dont’s.” These are tried and true methods used to make sure that your data is unrecoverable from spinning hard disk drives. But these don’t carry over to the SSD world.

Degaussing—applying a very strong magnet—has been an accepted method for erasing data off of magnetic media like spinning hard drives for decades. But it doesn’t work on SSDs. SSDs don’t store data magnetically, so applying a strong magnetic field won’t do anything.

Spinning hard drives are also susceptible to physical damage, so some folks take a hammer and nail or even a drill to the hard drive and pound holes through the top. That’s an almost surefire way to make sure your data won’t be read by anyone else. But inside an SSD chassis that looks like a 2.5inch hard disk drive is actually just a series of memory chips. Drilling holes into the case may not do much, or may only damage a few of the chips. So that’s off the table, too.

Erasing free space or reformatting a drive by rewriting it as zeroes is an effective way to clear data off on a hard drive, but not so much on an SSD. In fact, in a recent update to its Mac Disk Utility, Apple removed the secure erase feature altogether because they say it isn’t necessary. So what’s the best way to make sure your data is unrecoverable?

Lock It Up and Throw Away the (Encryption) Key

Hopefully your SSD isn’t dead yet or hasn’t been pulled because this takes a bit of advanced planning. But as the old expression goes, an ounce of prevention is worth a pound of cure.

The easiest way to make sure the data on your SSD is unrecoverable is not to erase at all, but to encrypt it. Without having the passphrase or encryption key to recover from, any data on that drive is useless to anyone that finds it.

Apple’s FileVault is encryption software included with macOS. Microsoft’s built-in encryption software for Windows is called BitLocker. Both systems are full-disk encryption methods, so anything you’ve stored on your hard disk is safe from prying eyes unless you type in a passphrase or key to decrypt the data.

Reformat the drive and you should be safe—any data on there is unrecoverable without that encryption key. If you want to rest even easier, re-encrypt the drive after the format, then reformat again.

If you’ve upgraded your computer with a third-party SSD, visit the manufacturer’s website. Intel, Samsung, and others make free SSD utilities designed to work with their own devices. Many of these utilities include reformatting and erasing tools, including some secure erase options that will help give you additional peace of mind.

Physically destroying the SSD by shredding it into small particles is the absolutely safest, most foolproof method for safe and secure disposal. Unfortunately, it’s also the most expensive.

Prices on devices designed for SSD shredding start in the thousands. This isn’t something to buy on a whim for home use. And the sort of shredder that you might use to get rid of old tax documents or CDs won’t work—an SSD will jam them up.

If your business has the budget, a number of companies make shredding devices especially designed to physically destroy SSDs. Security Engineered Machinery, Phiston, and Garner are popular SSD shredder makers.

It’s important to check the specs of any potential shredder to make sure the shred size is small enough to actually destroy the memory chips on your SSD, however. The shred width should be half an inch or less if you want to make sure the chips get properly mashed up.

No, a woodchipper like the one from the movie “Fargo” does not have a suitable shred width for secure SSD disposal.

If your SSD looks like a hard disk drive, you should be able to take it apart with the right tools (usually the small screwdrivers included with a computer repair kit are all you need). Inside you’ll find the SATA memory chips where data is actually stored; you can remove them and destroy them however you see fit, whether it’s by a shredder or some other destructive means.

One of the folks in the office found this video if you’d like to see the process in action. We’re not affiliated with any of the products shown here.

Some computers—most notably recent model Macs from Apple—include factory-installed SSDs that are integrated directly onto the motherboard and may not be removable. Sure, you might be able to run the whole main logic board through a shredder, but that seems…well, excessive.

In those cases, physically destroying the SSD becomes a lot harder. Which makes it doubly important to have another way to make sure your data is safe, like encrypting the drive, for example.

Find a New Use for It

Upgrading an SSD that’s still working? If you want to hang on to it, there are plenty of options. If it’s in a SATA enclosure, you can pop that SSD into an external USB hard disk drive enclosure and use it as a backup drive or as additional storage for whatever you might need. Some companies including Transcend and Other World Computing make external enclosures for the removable, upgradeable SSD cards you’ll find in late-model Macs, too.

You can also hand down or sell the SSD to a friend or family member who could use the upgrade, too. Assuming you want to be on the hook for the inevitable family tech support to follow.

One way or the other, it’s a good idea to encrypt and reformat the SSD before handing it off to anyone else.

If you’re interested in upgrading your computer with an SSD or you have questions about an SSD configuration you’re having some problems with, we’ve published a few blog posts and written a SSD 101 series. Let us know if you have other questions!

The Cloud’s Software: A Look Inside Backblaze
Next Post: Back Up and Restore Time Machine Using Synology and the Backblaze B2 Cloud