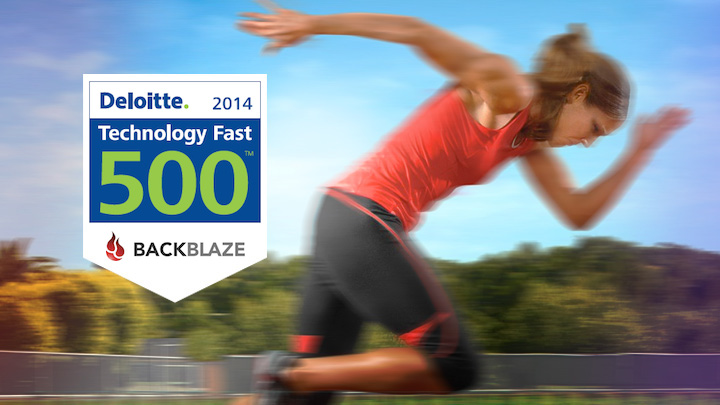 With 917% revenue growth over the last five years, Backblaze has just secured itself the 128th spot on the list of the fastest growing technology companies in the United States. The journey has been exciting but could have come to an abrupt end at various times. Let me share a bit about how we grew and what we’ve learned.

In 2007, Jeanine had a computer crash and begged Brian for help recovering her files. She had no backup. He could not help.

Five of us talked about this experience and realized that 100% of photos, movies, and personal and work documents were going digital. But with fewer than 10% of people backing up their computers, eventually all of these digital items would vaporize. We quit our jobs and started Backblaze to solve the impending disaster.

While we had previously raised VC funding for startups, we decided to start Backblaze differently, committing to each other that we would work for one year without pay, and to put a bit of money into the business. This would effectively be the seed round.

After five years of steady growth, we decided to raise our first VC round.

From the outside it seems like a simple, beautiful exponential growth curve up and to the right. From the inside, the challenges along the way don’t fit onto a single page. Probably not into a book either. Paul Graham has a fantastic chart of this experience he calls the “Startup Curve.”

But others, such as the distraction of almost being acquired or the massively impactful challenge of a flood in Thailand were harder to predict.

Despite the challenges, there were two things that kept the company succeeding: 1) focused, determined, hard work, and 2) luck.

The day of our initial beta launch on June 4th, 2007, we had glowing articles in TechCrunch and Ars Technica. People were signing up in droves and it was thrilling. But a week later the servers were bored—no one was showing up to the website. The initial external excitement vaporized and what happened next was all of us having to put our heads down and plow forward. Day after day we needed to do the small things required to build the business, that over time, add up to growth.

And then there was luck. We planned to store data on Amazon S3. Since we couldn’t afford it, we designed our own storage. Not only did that end up being a huge boon to us as it dramatically reduced our costs, but open-sourcing our Backblaze Storage Pod design hit a nerve and one million people read that blog post. It helped put us on the map.

Early on, the data center asked us to commit to a quarter of one cabinet for one year. At the time that was a $12,000 commitment and we negotiated it down to six months to reduce our risk. Now we have over 100 petabytes of data stored in over 100 cabinets, adding three cabinets of equipment every month, and committed for several years. Sometimes growth sneaks up on you.

To qualify for the Fast 500, a business had to earn over $50K in revenue in 2009 and over $5 million in revenue in 2013. We obviously exceeded those numbers. (While we don’t disclose revenue, Backblaze is in double-digit millions of dollars in revenue.)

In the same period as Backblaze has grown 917%, it is estimated that 55% of companies failed. Mortality rates are even higher in the information technology space where Backblaze resides, and over the years, multiple online backup companies and services have folded.

Bootstrapping a company, especially a capital-intensive one, meant we constantly had to watch cash-flow. Initially we were “afraid of customers” because a large influx of new customers meant having to buy another $10,000 Storage Pod, for customers who would pay us $5 per month. Eventually it would make sense, but for the first year we would be cash-flow negative. We came up with one simple way to solve this cash-flow challenge, but without raising capital, sometimes you have to make the tradeoff that things that make sense in the long run aren’t feasible because you won’t make it to the ‘long run’ if you run out of cash.

I’m honored that Backblaze has received this Fast 500 award and there has been a lot that we have learned. Here are four key takeaways:

I don’t mean a ‘green’ business; I mean a business that can last. A business can’t be high-growth if it’s out of business. Aim toward a model where customers support the company, even if at times you decide to raise funding. If customers are the cash engine, your business won’t be at the whim of the funding markets.

Plan for the Long Term

Some companies are a flash in the pan—founded, launched, and acquired in a year. There’s a draw to this quick-buck approach. But most successful companies take years to build. Work on something you’ll be excited to do for many years. It’ll make the journey great, help overcome the bumps, and increase the chances of success.

Work a Day at a Time

When we started Backblaze, we wrote an entire wall of products and features we wanted to build. After seven years, we’re still working on the first one. Solving the right problem takes focus and time, and doing that is generally much better than partially solving many different problems.

Today is one of those exciting ‘success days’ when we celebrate an achievement. But this growth is looking in the rearview mirror. And tomorrow it’s time to get our heads back down and charge on.

Hard Drive SMART Stats
Next Post: There’s No “I” in Bryan