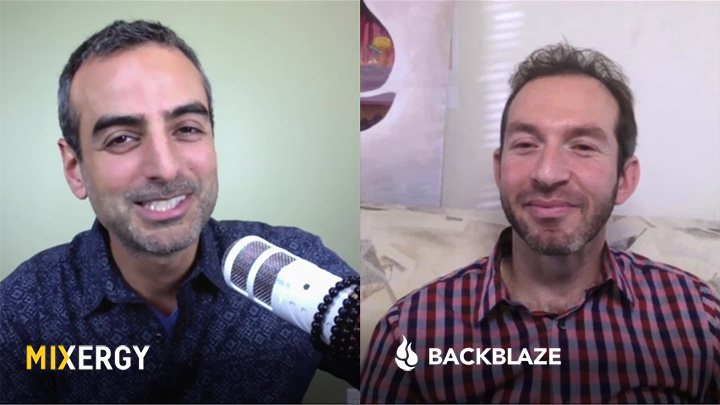 Recently, our fearless leader, Gleb, did an interview with Andrew Warner for Mixergy! The topic was entrepreneurship and launching a company without venture capital. The interview is about an hour and a half long, but we decided to write up a bit of a TL/DR version along with some key takeaways and time stamps. You can watch the interview on Mixergy (though you’ll need to provide an email address for a link to the full video). Here are some fun excerpts from the show:

The Backblaze Design Process—Taking a Step Back and Listening to People (8:40):

“….The way our design process at Backblaze works is we usually sketch UIs on paper first, literally by hand, and then we have one of our co-founders, who is a graphic designer, create mockups of those. We put them up on a wall and then we walk through them that way before any code gets written. That way, you can kind of take a step back and see what the user experience is going to be as opposed to what is the code that is required to build it.

So, the first thing that we would do is we would sketch up some of these things, bring people in, and just talk to them. The first focus group was actually just saying, “What do you do to protect your data? Do you do anything?

And just even learning what people’s processes were. We heard, ‘Well, I back up stuff to an external hard drive,’ ‘When I go on vacation, I copy my documents folder. I guess the last time I did that was a year and a half ago.’ That was a common one. We had people say, ‘I just take my most important files and mail them to myself in Gmail.’ We had someone who was just like, ‘I know I should, but really my backup method is praying.’

Why Backblaze Focuses on Ease of Use—Asking Questions to Find a Fit (16:38):

“One of the guiding lights that we have always had was ease of use. Even before this company, this team, we’ve worked together for about 15 years. Ease of use is something we just sort of share as DNA. So, whenever we look at it, whenever we’re digging into it, we say, ‘Is this going to be easy or hard?’ So, the focus groups help. But the focus groups were these limited things. We did it a few times with a handful of people. It wasn’t this grandiose thing.

But what we did all the time was go out and just talk to people. Literally, I remember I was at a friend’s wedding in Tahoe and I was on a hike with a group of people. I was just like, ‘What do you do for backup?’ And having this conversation with these people. I didn’t say, ‘We’re starting a company.’ I didn’t say, ‘Here’s exactly the product we’re going to do.’ I just started exploring with them, ‘What do you do today when you take photos and you take movies and you’ve got stuff on your computer—what do you do?’

The First Backblaze Office—Kicking Your CTO Out (32:57):

“So, first of all, this ‘office,’ this was a one-bedroom apartment that our CTO lived in. When we decided to start Backblaze, two of us lived in San Francisco, two of us lived in San Jose, and he lived in this place in Palo Alto and was willing to let us start the company there. The original plan was there were going to be five of us that started the company. We were only going to be there for six months and then we get out. It turned out six months became a year, and five people became seven, and seven became nine…

…We stayed at his apartment until at some point he looked up and he’s like, ‘You guys are obviously not leaving. So, I am.’ He moved out. We took over his bedroom, which was great, because we needed more space.”

Deciding to Bootstrap—Why Start a Startup Without Venture Capital (34:47):

“…The Mailfrontier exit was mediocre. It was a $31 million sale. So, the company was sold for multiple millions, but there was quite a bit of venture funding that went into it. In part, it’s why we decided to bootstrap Backblaze to get started. We kind of saw firsthand what happens through the whole venture process, that even though the company sold for $30 million and even though we had thousands of enterprise customers, very few people made any real amount of money off it…

…We said, ‘There are positives and negatives to venture and there are positives and negatives to bootstrap. Let’s positive the bootstrap side of it.” When we started, it was very lean. We quit our jobs and committed to a year without salary between each other. The idea was that if all of us quit our jobs and ten weeks in, two of us go, ‘You know what? This whole bootstrapping thing sucks. I’m going to get a job,’ then the other three are left holding the bag.

So, by committing to each other for a year without salary, we figured we would have a chance of getting it off the ground and it would effectively be the angel round simply by us starting. We put a little bit of money in. It wasn’t a lot to get the company started. But the main thing was the deferred salaries.

So the thing was, it ended up being a year and a half before we took a single penny in salary and that was minimum wage, which was like, ‘Woohoo, we’re making minimum wage.’ It was a very exciting time. It was lean times. We raised no funding. We were paying for mortgages and rent. My wife was in law school. I had a mortgage to pay. It was lean times. So, pizza was a splurge.’

“So, by 2009, it was a steel server and it had kind of momentum behind it internally. We had a lot of the servers deployed. We felt pretty comfortable. They seemed to work well. We kind of got into a rhythm with it. We started talking about, ‘Should we tell people about this?’ Our original thought was to tell people, ‘Hey, we’ve done this cool thing,’ kind of a press release almost about it.

The thing was that part of the motivation for sharing a little bit more about it was that people were, at the time, they were saying things like, ‘There’s no way these guys could do $5, unlimited. Clearly there’s something fishy going on here.’ The example they gave most of the time was they would point to Amazon S3 and say, ‘I’ve done the math on Amazon S3 and these guys are clearly losing money, which means it’s not possible.’

So, the three common explanations were, one, what they must be doing, they must have a ton of venture capital and they’re just burning through cash and once the cash runs out, they’re going to raise prices or they’re going to go out of business…

…The other reason they said was, ‘Clearly there’s some sort of other mischievous plan, like they’re going to take all our data and sell it.’ Or my favorite, ‘What must be happening is they’re not actually storing any data and they’re just hoping no one does a restore.’ I’m like, ‘That’s brilliant. That would be awesome…’

…So, what we wanted to do was show that no, we actually were really making money. We were profitable on a customer basis. The reason for that was we built this very inexpensive storage system. So, we thought, ‘Okay, we’ll share this storage design.’

Raising Money—Why Take Funding After Bootstrapping For So Long (77:46):

We did something that is a little bit unusual, which was as opposed to just the founders taking money off the table, we did what’s called a tender offer, where we said, ‘Anyone who owns stock, whether they are employees, contractors, or early angel investors. Anyone who owns stock can sell a certain percentage of their shares.

It was the same amount whether you’re a founder or a contractor or anybody. You could sell the same percentage of your shares in this VC round if you want. It was completely open and you could choose to do it or not do it. About half the people said yes and half the people said no, which meant we felt like it was priced perfectly. So, it was a good way of doing that too.”

Startups take a lot of elbow grease and luck! Check out Gleb’s full interview and a bunch of other great interviews with entrepreneurs and startup founders at Mixergy.