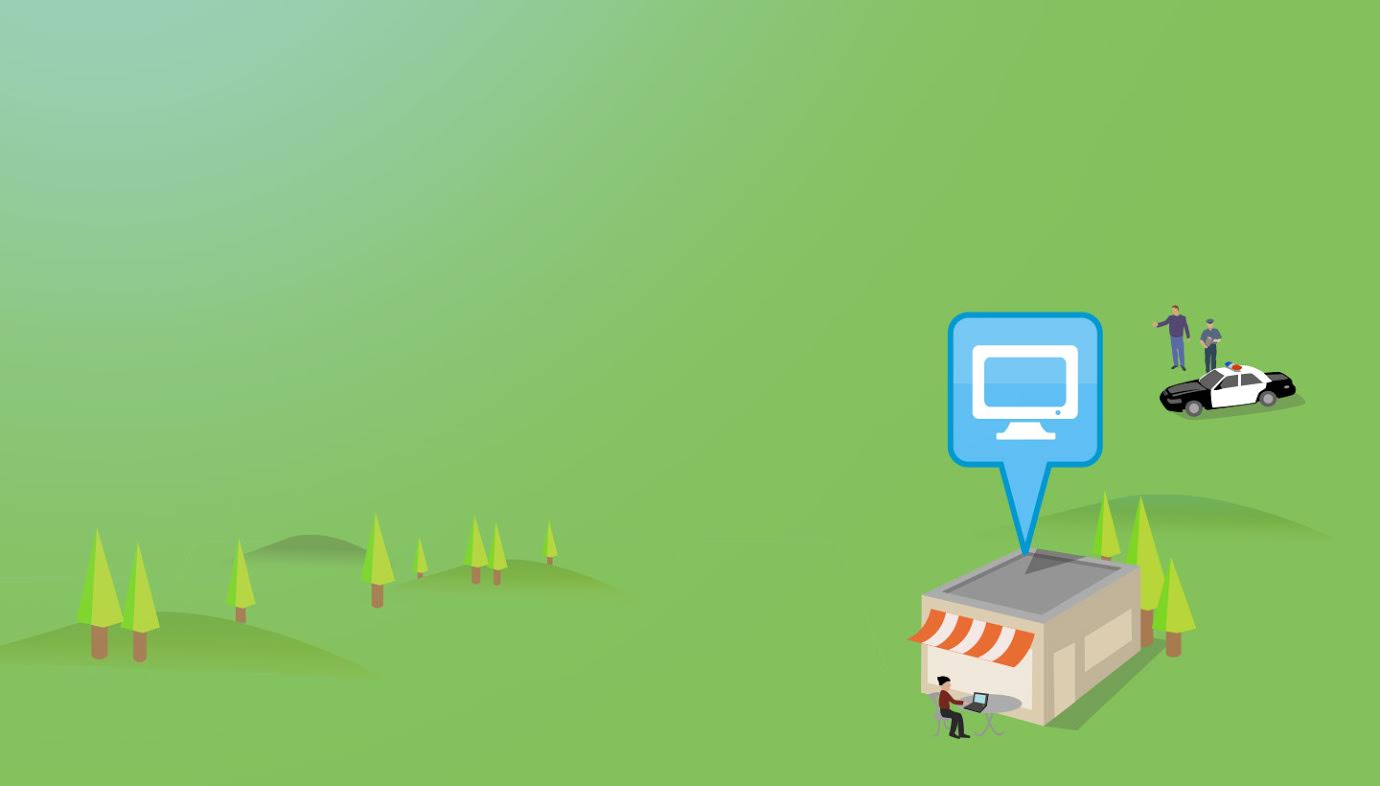 Locate My Computer, as you’ll read in the stories below, came about because some of our users had their computers stolen and were trying to find a way to retrieve their devices. They realized that while some of their programs and services like Find My Mac were wiped, in some cases, Backblaze was still running in the background. That created the ability to use our software to figure out where the computer was contacting us from. After manually helping some of the individuals that wrote in, we decided to build it in as a feature. Little did we know the incredible stories it would lead to. We’ll get into that, but first, a little background on why the whole thing came about.

“My friend’s laptop was stolen. He tracked the thief via @Backblaze for weeks & finally identified him on Facebook & Twitter. Digital 007.”

Mat —
In December 2010, we saw a tweet from @DigitalRoyalty which read: “My friend’s laptop was stolen. He tracked the thief via @Backblaze for weeks & finally identified him on Facebook & Twitter. Digital 007.” Our CEO was manning Twitter at the time and reached out for the whole story. It turns out that Mat Miller had his laptop stolen, and while he was creating some restores a few days later, he noticed a new user was created on his computer and was backing up data. He restored some of those files, saw some information that could help identify the thief, and filed a police report. Read the whole story: Digital 007 — Outwitting The Thief.

Mark —
Following Mat Miller’s story we heard from Mark Bao, an 18-year old entrepreneur and student at Bentley University who had his laptop stolen. The laptop was stolen out of Mark’s dorm room and the thief started using it in a variety of ways, including audition practice for Dancing with the Stars. Once Mark logged in to Backblaze and saw that there were new files being uploaded, including a dance practice video, he was able to reach out to campus police and got his laptop back. You can read more about the story on: 18 Year Old Catches Thief Using Backblaze.

After Mat and Mark’s story we thought we were onto something. In addition to those stories that had garnered some media attention, we would occasionally get requests from users that said something along the lines of, “Hey, my laptop was stolen, but I had Backblaze installed. Could you please let me know if it’s still running, and if so, what the IP address is so that I can go to the authorities?” We would help them where we could, but knew that there was probably a much more efficient method of helping individuals and businesses keep track of their computers.

Some of the Greatest Hits, and the Mafia Story

In May of 2011, we launched “Locate My Computer.” This was our way of adding a feature to our already-popular backup client that would allow users to see a rough representation of where their computer was located, and the IP address associated with its last known transmission. After speaking to law enforcement, we learned that those two things were usually enough for the authorities to subpoena an ISP and get the physical address of the last known place the computer phoned home from. From there, they could investigate and, if the device was still there, return it to its rightful owner.

Bridgette —
Once the feature went live the stories got even more interesting. Almost immediately after we launched Locate My Computer, we were contacted by Bridgette, who told us of a break-in at her house. Luckily no one was home at the time, but the thief was able to get away with her iMac, DSLR, and a few other prized possessions. As soon as she reported the robbery to the police, they were able to use the Locate My Computer feature to find the thief’s location and recover her missing items. We even made a case study out of Bridgette’s experience. You can read it at: Backblaze And The Stolen iMac.

“Joe” —
The crazy recovery stories didn’t end there. Shortly after Bridgette’s story, we received an email from a user (“Joe” — to protect the innocent) who was traveling to Argentina from the United States and had his laptop stolen. After he contacted the police department in Buenos Aires, and explained to them that he was using Backblaze (which the authorities thought was a computer tracking service, and in this case, we were), they were able to get the location of the computer from an ISP in Argentina. When they went to investigate, they realized that the perpetrators were foreign nationals connected to the mafia, and that in addition to a handful of stolen laptops, they were also in the possession of over $1,000,000 in counterfeit currency! Read the whole story about “Joe” and how: Backblaze Found $1 Million in Counterfeit Cash!

The Maker —
After “Joe,” we thought that our part in high-profile “busts was over, but we were wrong. About a year later we received word from a “maker” who told us that he was able to act as an “internet super-sleuth” and worked hard to find his stolen computer. After a Maker Faire in Detroit, the maker’s car was broken into while they were getting BBQ following a successful show. While some of the computers were locked and encrypted, others were in hibernation mode and wide open to prying eyes. After the police report was filed, the maker went to Backblaze to retrieve his lost files and remembered seeing the little Locate My Computer button. That’s when the story gets really interesting. The victim used a combination of ingenuity, Craigslist, Backblaze, and the local police department to get his computer back, and make a drug bust along the way. Head over to Makezine.com to read about how:How Tracking Down My Stolen Computer Triggered a Drug Bust.

Una —
While we kept hearing praise and thanks from our customers who were able to recover their data and find their computers, a little while passed before we would hear a story that was as incredible as the ones above. In July of 2016, we received an email from Una who told us one of the most amazing stories of perseverance that we’d ever heard. With the help of Backblaze and a sympathetic constable in Australia, Una tracked her stolen computer’s journey across 6 countries. She got her computer back and we wrote up the whole story: How Una Found Her Stolen Laptop.

And the Hits Keep on Coming

The most recent story came from “J,” and we’ll share the whole thing with you because it has a really nice conclusion:

Back in September of 2017, I brought my laptop to work to finish up some administrative work before I took off for a vacation. I work in a mall where traffic [is] plenty and more specifically I work at a kiosk in the middle of the mall. This allows for a high amount of traffic passing by every few seconds. I turned my back for about a minute to put away some paperwork. At the time I didn’t notice my laptop missing. About an hour later when I was gathering my belongings for the day I noticed it was gone. I was devastated. This was a high end MacBook Pro that I just purchased. So we are not talking about a little bit of money here. This was a major investment.

Time [went] on. When I got back from my vacation I reached out to my LP (Loss Prevention) team to get images from our security to submit to the police with some thread of hope that they would find whomever stole it. December approached and I did not hear anything. I gave up hope and assumed that the laptop was scrapped. I put an iCloud lock on it and my Find My Mac feature was saying that laptop was “offline.” I just assumed that they opened it, saw it was locked, and tried to scrap it for parts.

Towards the end of January I got an email from Backblaze saying that the computer was successfully backed up. This came as a shock to me as I thought it was wiped. But I guess however they wiped it didn’t remove Backblaze from the SSD. None the less, I was very happy. I sifted through the backup and found the person’s name via the search history. Then, using the Locate my Computer feature I saw where it came online. I reached out on social media to the person in question and updated the police. I finally got ahold of the person who stated she bought it online a few weeks backs. We made arrangements and I’m happy to say that I am typing this email on my computer right now.

J finished by writing: “Not only did I want to share this story with you but also wanted to say thanks! Apple’s find my computer system failed. The police failed to find it. But Backblaze saved the day. This has been the best $5 a month I have ever spent. Not only that but I got all my stuff back. Which made the deal even better! It was like it was never gone.”

Have a Story of Your Own?

We’re more than thrilled to have helped all of these people restore their lost data using Backblaze. Recovering the actual machine using Locate My Computer though, that’s the icing on the cake. We’re proud of what we’ve been able to build here at Backblaze, and we really enjoy hearing stories from people who have used our service to successfully get back up and running, whether that meant restoring their data or recovering their actual computer.

If you have any interesting data recovery or computer recovery stories that you’d like to share with us, please email press@backblaze.com and we’ll share it with Billy and the rest of the Backblaze team. We love hearing them!

Connect Veeam to the B2 Cloud Using StarWind VTL
Next Post: The Challenges of Opening a Data Center — Part 1