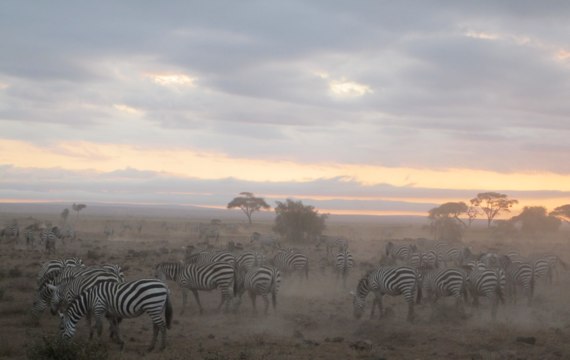 Two weeks ago I returned from my honeymoon—a trip to Kenya that included an amazing safari. While the trip was incredibly relaxing, I was nervous until a few days after I returned home.

You see, since this was a honeymoon, my wife made a firm request: no laptop. Checking email and doing work could wait until we were back. A few days into the trip I realized the photos we were taking would be great memories, but we had no way to backup the SD cards while we were on the road.

What if I dropped the camera? If our luggage was lost? If the SD cards got soaked?

I started putting the camera and SD cards into a zip-lock bag and then into the hotel safe whenever we did not bring them with us. I thought about backing them up online, but waiting for a slow satellite-based internet connection in a game reserve in the middle of the Masai Mara was not practical. I figured I could go to an internet cafe and burn backup copies onto DVDs, but the computer DVD burners did not work.

In the end I just continued to be paranoid throughout the trip. When I got home, I downloaded the photos to my wife’s PC, then to an external hard drive, then to my Mac. Within a day they were also backed up online by Backblaze.

How Would I Backup My Photos While Traveling in the Future?

Backup to an iPod

Backing up to an iPod seems like the most natural option. iPods are fairly inexpensive, capacious, sturdy, and most people have at least one. Looking around, this seems to be one of the best iPod SD card reader options available. However, “best” does not mean “good.” This Belkin device is over six years old and customers have said it is very slow and only works with old iPods (think actual click-wheel).

Backup to an iPod Touch or iPhone

I actually had an iPod Touch with me on the trip, but had no way to transfer photos to it. This seems to be the only iPhone or iPod SD card reader available that has been reviewed. Again, the reviews are not fantastic—but it does seem to work.

Backup to an iPad

Apple has developed its own SD card reader for the iPad. The reviews are good. It’s developed by Apple. It’s not too expensive. But… it requires taking an iPad with you on your travels. This is not an ideal solution because a) at over $500 not everyone can afford one, b) it is somewhat fragile, c) it is a bit large if all you want is an SD card backup.

Backup to an External Hard Drive

Backup to an SD Card

I would love to just have a small device that would duplicate one SD card to another. SD cards are cheap and I would put the backup SD card in the mail and send it back home. Unfortunately, I can’t find a single device that does this. Belkin? Sandisk? Kingston? I’m looking at you.

Of course, as soon as possible I would do my Backblaze online backup—but while traveling without a laptop, next time I will bring one of the options above.

Have you found a better approach? Email me with tips at gleb.budman@backblaze.com and I will update this blog post if someone suggests something really useful.

UPDATE: After receiving a lot of feedback, I published a detailed blog post summarizing the feedback about how to backup photos while traveling.