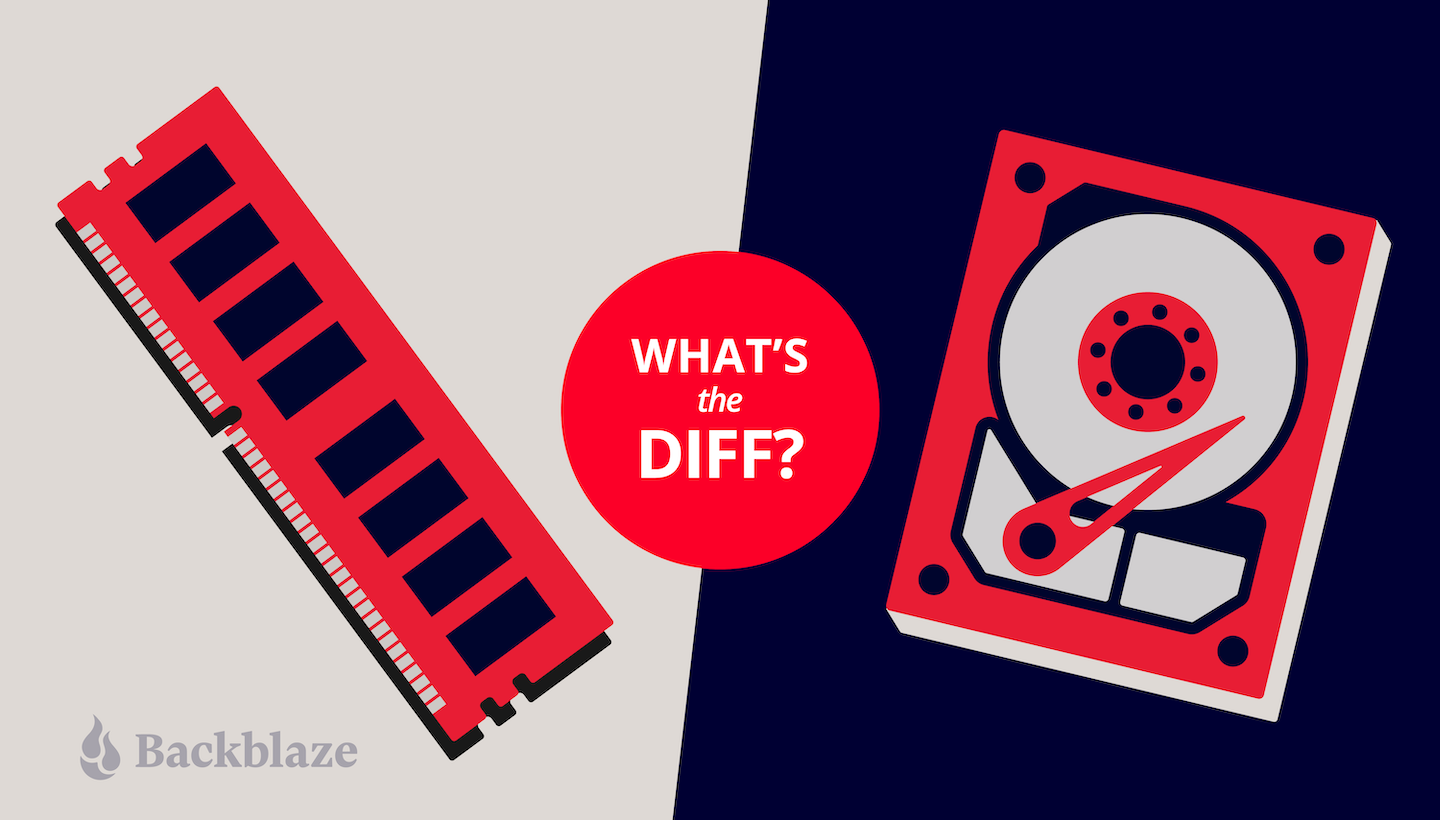 Editor’s Note: This post was originally published in 2016 and has since been updated with the latest information on RAM vs. storage.

A lack of memory is one of the most common causes of computer problems (and people problems, as it were). But any tech support expert will tell you that computer users are often unclear on the different types of memory in their computers. Users often refer to memory and storage interchangeably.

So, why is it valuable to understand the difference between storage and memory? The answer comes down to performance. If your computer is sluggish or performing poorly, the root cause might lie in insufficient storage or memory. By understanding how both components make your computer run, you can make better decisions about what computer to buy (or whether it makes sense to consider upgrades).

That’s not all. With a clear understanding of the different computer components, you can diagnose performance problems that affect your computer’s performance. If a lack of storage is causing problems, adding additional storage is a great way to boost performance.

The Difference Between Memory and Storage

Your computer’s main memory is called RAM (i.e., random access memory). You can think of it as a workspace the computer uses to get work done—a desk, if you will. When you double-click on an app, open a document, or do much of anything, part of your “desk” is covered and can’t be used by anything else. As you open more files, it is like covering your desk with more and more items. Using a desk with a handful of files is easy, but a desk that is covered with a bunch of stuff gets difficult to use.

In addition to RAM, your computer probably also has storage like a hard disk drive (HDD) or solid-state drive (SSD) where data is recorded for the long term. You could use it to store old company records like a tax return from five years ago, your music collection, and apps that you use. Computer storage is like a filing cabinet—a place next to your workspace where you can retrieve information as needed.

RAM is volatile, meaning the information that’s put in there disappears when the power is turned off or when the computer is reset. Storage is different—it’s persistent. Data stays written on the disk until it’s erased or until the storage medium fails (more on that later).

RAM takes the form of computer chips—integrated circuits—that are either soldered directly onto the main logic board of your computer or installed in memory modules that go in sockets on your computer’s logic board.

The data stored in RAM can be accessed almost instantly regardless of where in memory it is stored, so it’s very fast—milliseconds fast. DDR4 RAM, one of the newer types of RAM technology, is capable of a peak transfer rate of 19200 MB/s! RAM has a very fast path to the computer’s CPU (i.e., central processing unit), the brain of the computer that does most of the work.

Find Out How Much RAM You Have

Use the following steps to confirm how much RAM your computer has installed. We’ll start with an Apple computer. Click on the Apple menu and then click About This Mac. In the screenshot below, we can see that the computer has 16GB of RAM.

With a Windows 10 computer, use the following steps to see how much RAM you have installed. Open the Control Panel by clicking the Windows button and typing “control panel,” then click System and Security, and then click System. Look for the line “Installed Memory (RAM).” In the screenshot below, you can see that the computer has 16GB of RAM installed.

If your computer is older and upgradable, putting in more RAM can improve performance. Specifically, more RAM makes it possible for you to use more apps, documents, and larger files at the same time.

People that work with very large files like large databases, videos, and images can benefit significantly from having more RAM. If you regularly use large files, it is worth checking to see if your computer’s RAM is upgradeable.

What Is Computer Storage?

Computers need some form of non-volatile storage—a place where data can stay even when the computer is turned off, so you don’t have to reload and re-enter everything each time you use the computer. That’s the point of having storage in addition to RAM.

Storage for the vast majority of computers in use today consists of a drive, either an HDD or an SSD. Drives can provide a lot of space that can be used to store applications, documents, data, and all the other stuff you need to get your work done (and your computer needs to operate).

Find Out How Much Storage You Have

To view how much free storage space you have available on a Mac computer, use these steps. Click on the Apple menu, then About This Mac, and then open Storage. In the screenshot below, we’ve circled where your available storage is displayed.

With a Windows 10 computer, it is also easy to view how much available storage space you have available. Click the Windows button and type in “file explorer.” When File Explorer opens, click on This PC from the list of options in the left-hand pane. In the screenshot below, we’ve circled where your available storage is displayed (in this case, 200GB).

In general, storage tends to be slower than RAM. Hard disk drives are mechanical devices, so they can’t access information nearly as quickly as memory does. In most personal computers, storage uses an interface called Serial ATA (SATA), which is slower than RAM.

So why use hard drives at all? Well, they’re cheap and available. And that’s not all—computer storage is getting faster thanks to the popularity of SSDs.

SSDs are much faster than hard drives since they use integrated circuits. SSDs use a special type of memory circuitry called non-volatile RAM (NVRAM) to store data, so everything stays in place even when the computer is turned off.

Even though SSDs use memory chips instead of a mechanical platter that has to be read sequentially, they’re still slower than RAM. There are two reasons for that difference in speed. First, the memory chips in SSDs are slower than those in RAM. Second, there is a bottleneck created by the interface that connects the storage device to the computer. RAM, in comparison, has a much faster interface.

How RAM and Storage Affect Your Computer’s Performance

For most general-purpose uses of computers—email, writing documents, surfing the web, or watching Netflix—the RAM that comes with our computer is enough. In the future, you might need to add a bit more to keep up with memory demands from newer apps and operating systems.

In some situations, adding more RAM is worth the expense. For example, editing videos and high-resolution images takes a lot of memory. In addition, high-end audio recording and editing as well as some scientific work require significant RAM.

However, not all computers allow you to upgrade RAM. For example, the Chromebook has fixed RAM—you cannot install more. The next time you buy a new computer, get answers to important memory questions. First, find out how much RAM the computer has installed. Second, determine if the computer’s RAM is upgradeable.

Besides RAM, the most serious bottleneck to improving performance in your computer can be your storage. Even with plenty of RAM installed, computers need to read and write information from the storage system (i.e., the hard drive or the SSD).

Hard drives come in different speeds and sizes. Many operate at 5400 RPM (i.e., their central axes turn at 5400 revolutions per minute). You’ll see quicker performance with a 7200 RPM drive. In some cases, you might even decide to use a 10,000 RPM drive. Faster drives cost more, are louder, and use more power, but they may be a good option.

Today, the most popular option for computer storage is quickly becoming SSDs. This type of computer storage is popular because it is faster, cooler, and takes up less space than traditional hard drives. They’re also less susceptible to magnetic fields and physical jolts, which makes them great for laptops. However, there is a downside: They cost more money per gigabyte than a hard drive.

For more about the difference between HDDs and SSDs, check out our post, “Hard Disk Drive (HDD) vs. Solid-state Drive (SSD): What’s the Diff?”

As a user’s disk storage needs increase, typically they will look to larger drives to store more data. The first step might be to replace an existing drive with a larger, faster drive. Or you might decide to install a second drive. One approach is to use different drives for different purposes. For example, use an SSD for the operating system and then store your business videos on a larger SSD.

If more storage space is needed, an external drive can be added, most often using USB or Thunderbolt to connect to the computer. This can be a single drive or multiple drives and might use a data storage virtualization technology such as RAID to protect the data.

If you have really large amounts of data, or simply wish to make it easy to share data with others in your location or elsewhere, you likely will turn to network-attached storage (NAS). A NAS device can hold multiple drives, typically uses a data virtualization technology such as RAID, and is accessible to anyone on your local network and—if you wish—on the internet, as well. NAS devices can offer a great deal of storage and other services that typically have been offered only by dedicated network servers in the past.

Back Up Early and Often

No matter how you configure your computer’s storage, remember that technology can fail. You always want a backup so you can restore everything easily. The best backup strategy shouldn’t be dependent on any single device, either. Rather than relying on a single device, it is best to leverage off-site backup like Backblaze.

Have a question? Let us know in the comments. And if you have ideas for things you’d like to see featured in future installments of our “What’s the Diff?” series, please let us know!

FAQs About Differences Between RAM And Storage