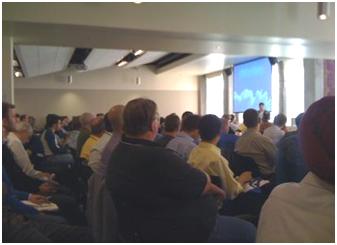 CloudCamp gathered a crowd of developers, entrepreneurs, business people, and investors last night to have an un-conference focused on honing the future of computing clouds. Despite spending less than a month on the event, Reuven Cohen and his team attracted several hundred people and 22 sponsors including Sun, Microsoft, Dell, Amazon, and a number of smaller companies. This was a testament to the organizers, but also an indicator of the fervor surrounding cloud computing.

Run in the traditional “BarCamp” approach, following a brief introduction the audience was invited to offer discussion topics they would like to lead with a set of 30 session slots available. Many topics revolved around:

…but “What is Cloud Computing?” drew perhaps the largest attendance.

In this discussion, cloud computing was likened to electricity (“you should be able to plug in, use as much as you want, and have a standard interface to access it”); people discussed whether cloud computing is a technology or a business model; some pondered whether the margins of cloud providers would eventually be driven to zero; and many struggled with what really is cloud computing and how is it different than hosting and shared servers.

Vendors like Amazon with its AWS and Nirvanix provide numerous benefits, especially for early-stage companies:

Technology startups building social applications with viral hooks trying to fund advertising-based businesses often use minuscule processing and storage relative to the business, marketing, and salary expenses. At least until they hit that viral hockey stick that requires scaling up at hyperspeed. If that magic happens, the question of “will we continue to see this and we should throw servers at this, or is this a flash of momentary virality and we’ll need to scale down on Wednesday” arises. Leveraging a cloud provider for these startups may be an excellent decision enabling them to scale up, scale down, and pay-per-use.

So did Backblaze use a cloud vendor to power our online backup service? No.

There is wisdom in clouds, but they aren’t for everyone. Stay tuned and I’ll explain our logic and approach in a post coming soon.

What’s Your Name Again? Somethingblaze?
Next Post: 10 Reasons Your Backup Will Fail