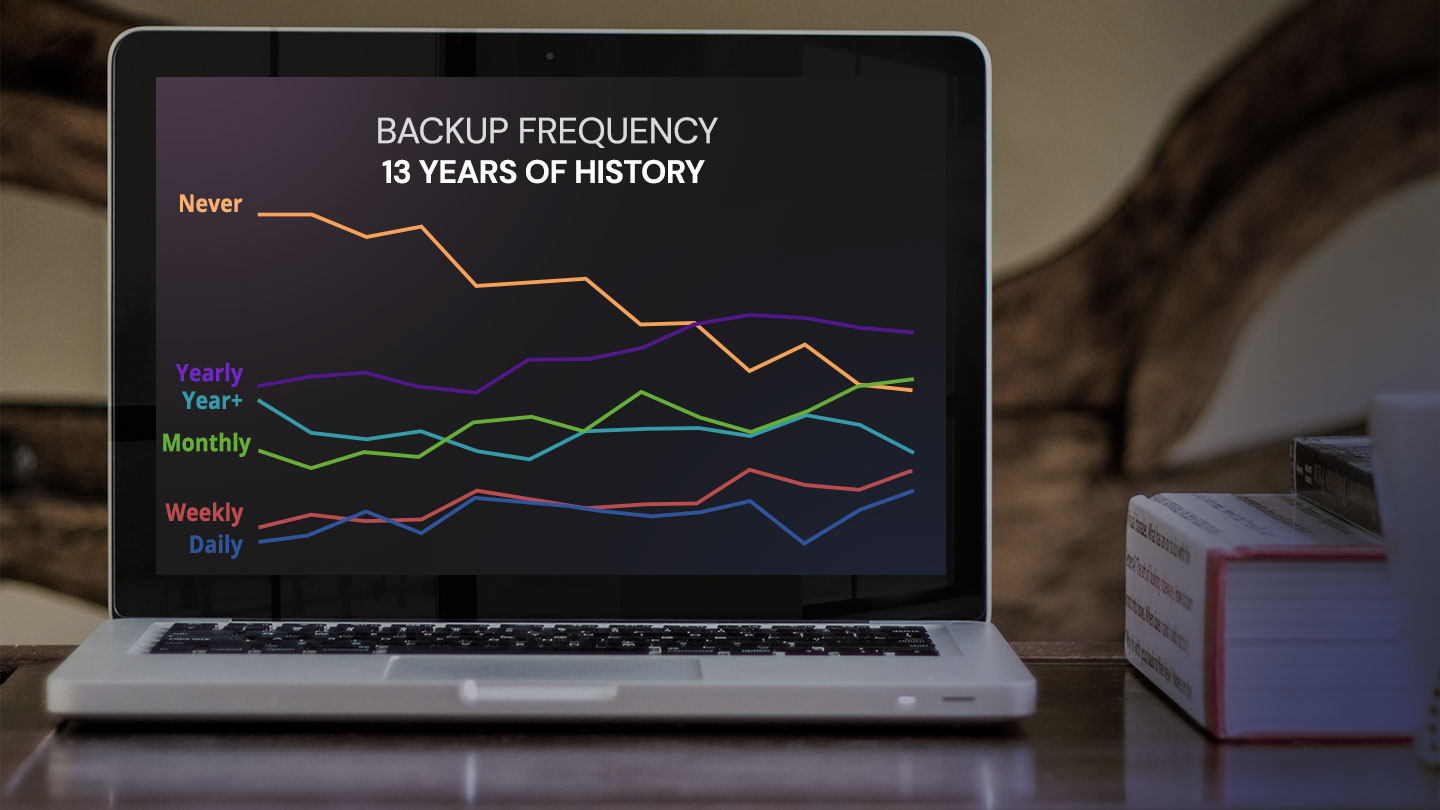 June is Backup Awareness Month and we’re now in our 13th year of working with The Harris Poll to ask a simple question: “How often do you back up all the data on your computer?” We’re always interested to see how average folks think about their data, and what they use for their primary backups. This year we also asked people about their history with data loss, and whether or not they are firmly grounded on how “the cloud” works. The results… may shock you.

How Backups Are Trending in 2021

Good news here, the results are positive! Of people who own a computer, more than ever are backing up daily, if not even more often: Our 2021 number is 11%. This is only an increase of one percentage point over last year, which may not seem like much, but does underline a positive upward trend over the years (6% in 2018, 9% in 2019, and 10% in 2020). As a computer backup provider, we’re thrilled that backups and disaster recovery are increasingly top of mind for people.

At the other end of the spectrum, 20% of those who own a computer have never backed up all the data on their systems, led by people 65 and older at 31%. It’s time to go visit the grandparents and help them back up their computers (I know I do!).

While the number of people who never back up their computers is down about 54.5% from when we first started the survey (35% in 2008 versus 20% in 2021), that still means one in five people are at risk of losing all their data should they have a computer or systems failure. That’s too much precious data at risk.

Below, we take a look at the detailed breakdown of backup frequency over the years that we’ve been conducting the survey.

In the chart above you can see that for the most part, things are pretty stable. The “never” category remains near the all-time low it reached last year, while yearly and monthly backups hold steady.

Looking at the pie chart, it’s nice to see that over the years the mix has become more spread out as the “never” category gets whittled down. 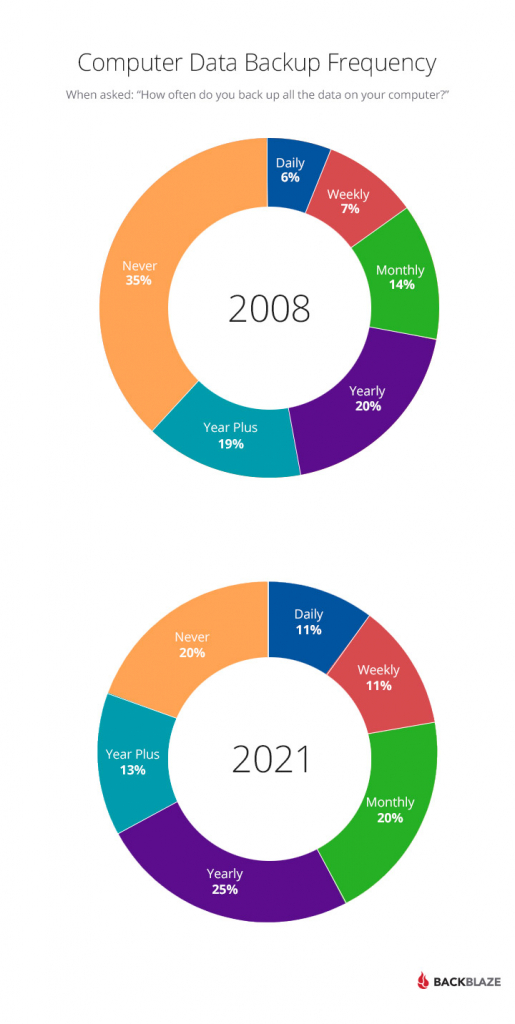 Overall, we take this to mean that data awareness remains at an all-time high, which is great news for people and their data.

Who Is the Mythical “Best Backup Person?”

Data Loss Is a Big Deal

Like we mentioned above, one in five of those who own a computer and never back up their data are at risk of losing all the data on their computer, which is problematic. Especially when you consider that of the people who own a computer:

That 61% of those who report having a security incident is astonishingly high. When you consider that the best way to protect yourself from malware and ransomware is having up-to-date backups, we’re thrilled that 11% of computer owners are backing up daily, but we still have a long way to go.

“The Cloud” Is Less Confusing Than We Thought…

This year we also asked people if they understood how “the cloud” works. It turns out that 31% of Americans don’t understand how the cloud works, which is a lower number than we had expected. One guess for why? COVID-19. As more of the world went virtual this year, people had to familiarize themselves with the cloud in a hurry, so overall awareness and understanding increased.

…But Cloud Services Continue to Confuse

That may be the most troubling bit of data from this year’s survey. Backup and sync services are very different in nature and should be treated as complimentary, not equivalent services. We have a great resource explaining the differences between cloud backup vs. cloud sync that you can read here.

The TL/DR is that backups should happen automatically, in the background, and shouldn’t rely on the person to take any action. They also shouldn’t be susceptible to someone removing the data from a shared or synced location. (Remember those 50% of people who lost access to their data?) Sync and cloud drive tools are great for collaboration (and we use them internally at Backblaze for just that reason) but they’re an “in addition to” tool, and shouldn’t be used in lieu of having proper backups in place.

Spread the Word…and Back Up!

You can help us get better results in next year’s survey and help us make sure that people never lose data again!

If you’re already a Backblaze customer, you can send your friends an extended trial and earn Backblaze credits for yourself with our Refer-a-Friend program.

Also, if you recall, 62% of those who own a computer had lost data, and since you’re already using Backblaze, you’re well on your way to preventing that fate for yourself. But if you want to protect yourself even further, take a look at our Extended Version History feature which increases your backup’s retention period from 30 days to one year, or forever.

If you are joining us for the first time, get started with your online backup today by partaking in a 15-day free trial. It’s risk free and you can be one of the people keeping your data safe by backing up on a daily basis!

We’ll also be hosting a webinar on June 23rd at 10am Pacifc to discuss this year’s results, backup best practices, and doing a bit of a Q&A. Please join us: Backup Best Practices and Q&A.

Backblaze Terraform Provider Changes the Game for Avisi
Next Post: A Cloud Storage Experiment to Level Up Chia Farming