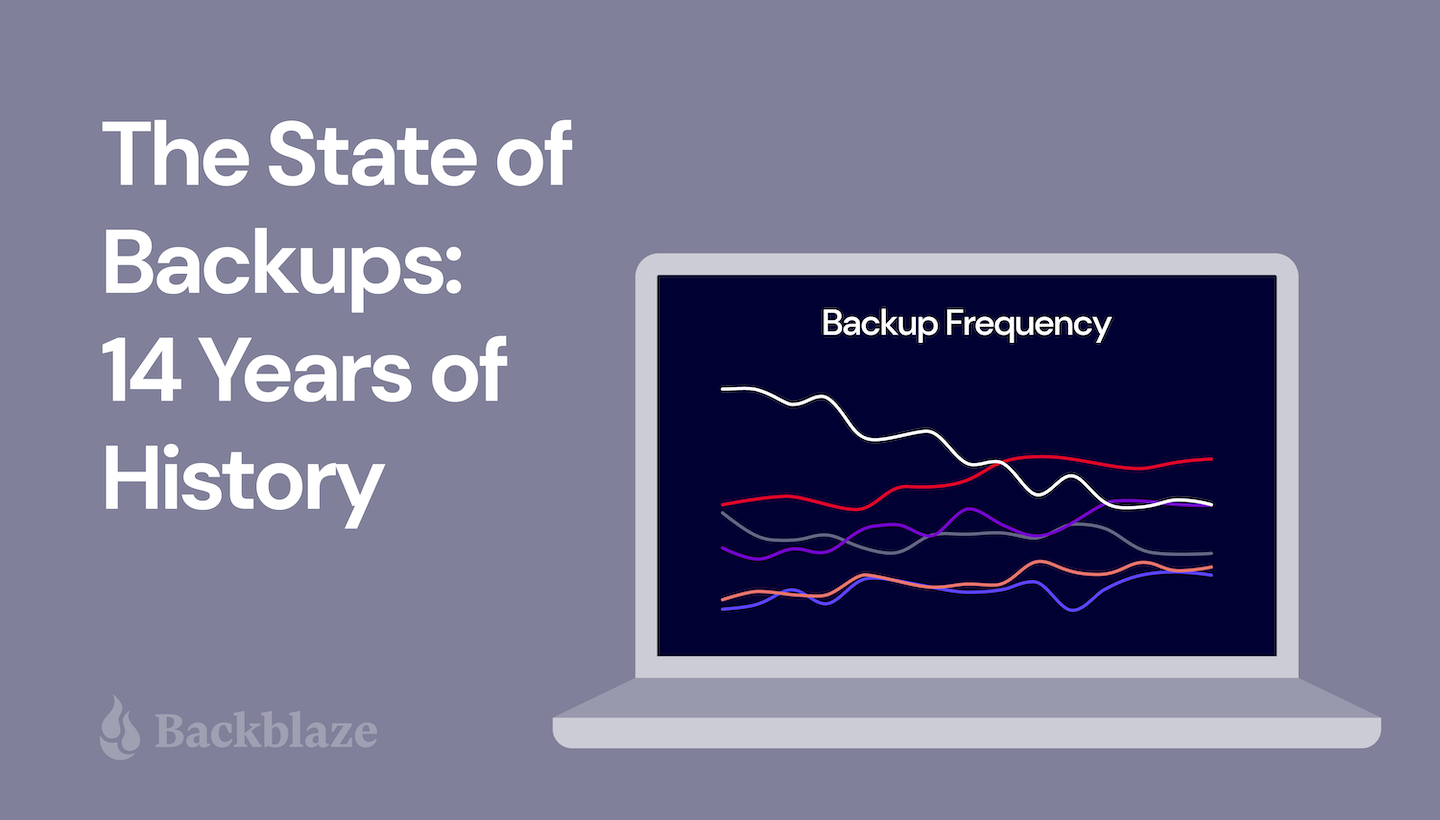 Every June, for Backup Awareness Month, we work with The Harris Poll to gauge the state of backups in the U.S. This is the 14th year of that survey, where we ask simply: “How often do you back up all the data on your computer?”

On occasion, we’ll throw some additional questions into the mix as well, and this year we focused on the confusion we often see between sync and backup services, along with respondents’ history of data loss. The backup frequency results of this year’s survey show that trends are holding pretty steady, but the rest of the results…very interesting!

First Things First: Are YOU Backing Up?

If you’re not backing up, start now and increase the stats for 2023.

How Backup Frequency Is Trending in 2022

The main issue we’re seeing here is that the number of computer owners who have never backed up their computer appears to have stopped decreasing, meaning that about 20% of people are still at risk of losing all of their data in the event of a computer crash or loss.

Some people aren’t into reading charts, so we also have this handy table:

If you’re not a fan of tables, but do like pie, here’s a comparison of the 2022 data compared to when we first started in 2008: 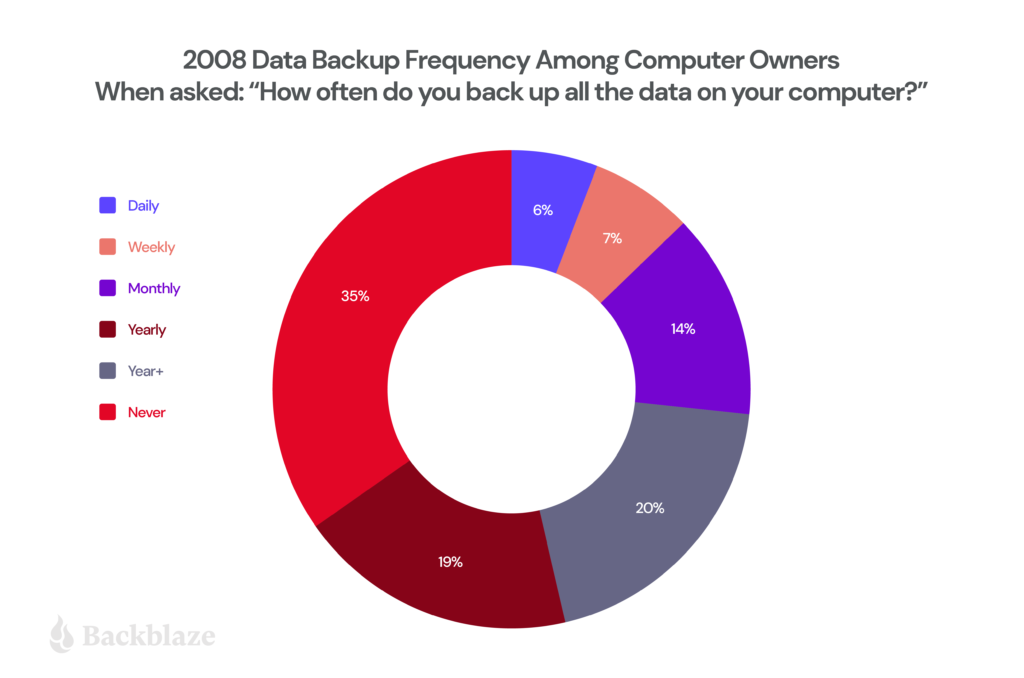 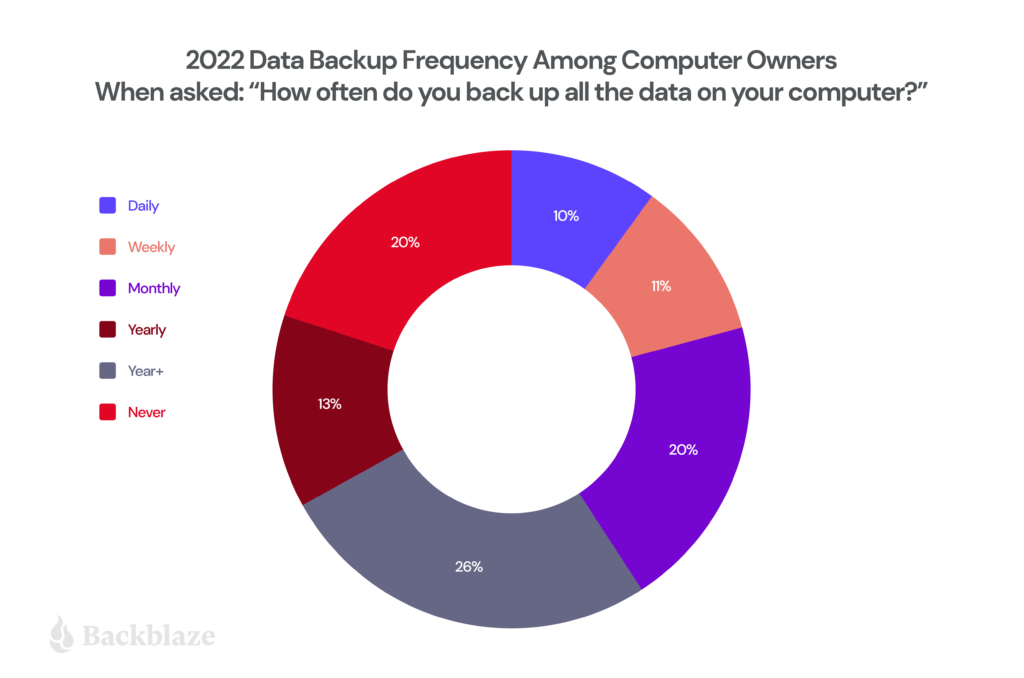 It’s nice to see the mix changing so much over time, especially with the “never” category fading. While the number of daily backups is still not anywhere close to where we’d like it, the data indicates that:

Overall, computer owners are backing up more frequently than a decade ago. However, as our astute readers know, the longer you go without creating a backup, the more data you are prone to losing should disaster strike.

Who’s “Best” at Backing Up?

Last year, we pored through the data to try and build a “profile” of the person who was most likely to be a “backer upper,” which we had defined as a person who owns a computer and backs it up at least once a day. What we found is that we were looking for:

Has that changed over the last year? Well, in 2022, the data suggest no statistically significant deviations that we can pull out, so maybe that’s good news across the spectrum?

Is Confusion a Cause for Concern?

While the number of people backing up at least once is good, we think there might still be some confusion in the world about how exactly they are backing up their data and what is getting backed up. We wanted to dive a bit deeper. When looking at the Americans who own a computer:

With 57% of computer owners using “the cloud” to back up their data, but only 12% of those using a cloud backup service, we’re left to wonder, what are the others using? In many cases, it’s a cloud drive or cloud sync service which may not actually be performing basic automated backup tasks.

We’ve often discussed the differences between sync and backup—how both of them are useful tools, but very different. While sync services are great for collaborating on and sharing data, they are not true backup services in that they’re typically not automated, and don’t provide the same level of protection as dedicated backup services can. And, be careful about only having data in one location—44% lost access to their data when a shared or synced drive was deleted. For more information, read our cloud backup vs. cloud sync blog post!

Even of those using a proper cloud backup solution, 48% may not be backing up all their data, and 10% of folks aren’t sure at all what their cloud backup service is doing. Yikes.

We then asked those who use one of the listed backups (i.e., “the cloud,” external hard drive, or NAS) about their confidence level that the service they use is set up to protect all the data on their computer, and 61% of people were not very confident. The numbers are broken down below:

That’s not a ton of confidence, and maybe now is a good time to remind folks to check their backups and to test a restore!

Why Is Backing Up Important?

This year’s survey results continue to show us that having a good backup strategy in place, whether for a business or an individual, is a great way to mitigate against different data disasters. Especially when you consider that of Americans who own a computer:

External hard drives are a great local backup method, and we recommend them when we discuss having a 3-2-1 backup strategy, but as our own Hard Drive Stats indicate, even in our professional environment, they do fail. And with 48% of computer owners reporting that they experienced a similar failure on their home device, it underscores the importance of having an off-site backup like Backblaze, just in case.

With over half of computer owners reporting a security incident as well and ransomware on the rise, there’s never been a more appropriate time to start backing up your computer. At Backblaze, we’re on a mission to make storing and using your data astonishingly easy, and we invite you to give our services a try!

Survey Method:
This year’s survey was conducted online within the United States by The Harris Poll on behalf of Backblaze from May 19-23, 2022, among 2,068 adults ages 18+, among whom 1,861 own a computer. The sampling precision of Harris online polls is measured by using a Bayesian credible interval. For this study, the sample data is accurate to within +2.8 percentage points using a 95% confidence level.

Fortune Favors the Backup: How One Media Brand Protected High-profile Video Footage
Next Post: How Backup and Archive Are Different for Professional Media Workflows