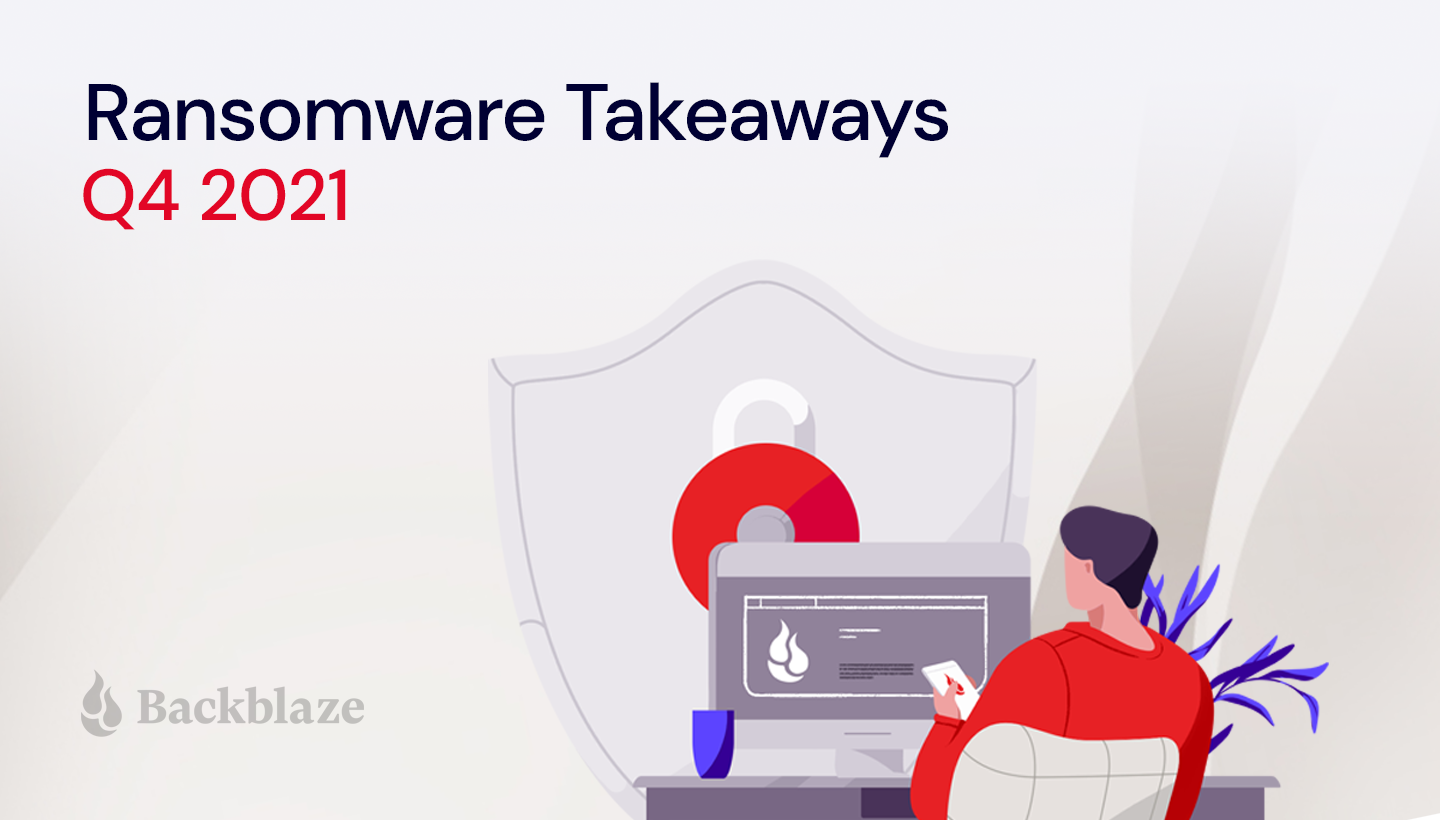 Ransomware commanded attention from both the media and governments like never before in 2021. It was an unprecedented year of major breaches, astronomical ransom demands, and attacks on businesses of all sizes. And much of what stood out to us towards the end of the year was the seemingly heightened regulatory response to previous quarters’ developments.

New regulations are hopeful signs that people are taking the ransomware threat more seriously, but they’re not enough to stop ransomware operators just yet. If you’re in charge of managing company data, knowing the latest in ransomware developments can help guide the choices and actions you take to protect company assets. Here are five key takeaways based on what we saw over Q4 2021.

In Q4, we learned that the U.S. State Department put $10 million bounties on two specific ransomware groups—DarkSide and Sodinokibi—as well as $5 million bounties on their affiliates. This follows a statement issued earlier in 2021 that offered $10 million bounties for information on any person who engages in cybercrime. The bounties have proven effective in the past, with the department paying out more than $200 million since 1984 to individuals who provided intelligence that helped address threats to U.S. security.

The rise in attacks in 2021 led to a rise in companies seeking out cyber insurance coverage if they hadn’t already, and subsequently, a rise in claims against cyber insurance policies. The cyber insurance dynamics are evolving in response, and companies may need to think about coverage differently. Lloyds of London, for example, will no longer cover losses stemming from nation-state-affiliated criminals, cyber warfare, and “retaliatory” cyber activity. Whether or not ransomware gangs will be fully accepted as nation-state attackers is still up for debate, but the truth is that the cybersecurity community understands that some big name groups are definitely operating in league with their particular locale’s government branches.

Also in November, the Ukrainian Security Service disclosed the names and positions of five members of a major cybercrime syndicate. The disclosure revealed the members’ links to the Crimean branch of the Russian Federal Security Service (FSB). They furthermore released recorded telephone conversations where the members discussed attacks and griped about their FSB salaries. According to the Ukrainian Security Service, the group has heavily targeted the Ukrainian government in more than 5,000 cyberattacks. Despite these efforts to dox major players, the group has continued their attacks as tensions between Russia and Ukraine continue to escalate.

In October, a ransomware group linked to a sanctioned entity—Evil Corp—posted information allegedly stolen from the National Rifle Association (NRA). While the NRA has not confirmed the attack, if true, it would potentially put them between a rock and a hard place. If they pay the attackers, they could face penalties from the U.S. government.

The sanctions are also changing the behavior of ransomware groups. Sanctioned groups are less likely to be successful in getting victims to pay. One way they get around this is by creating subsidiary brands or spinoff entities that, to an unknowing victim, seem to be unaffiliated with the sanctioned entity. When victims are unaware of affiliations between groups, they’re more likely to pay ransoms and less likely to disclose attacks to the authorities. However, pleading innocence may not be enough for victims to avoid consequences should the attacks be discovered by authorities.

5. Players in the Ransomware Economy Came Under Fire.

The ransomware economy is a murky web of actors that includes entities beyond just the ransomware operators themselves. In December, researchers linked 15+ ransomware-related crypto exchanges to a single prestigious skyscraper in Moscow—the tallest in the city, in fact. The findings provide more fuel for security experts to argue that Russian authorities give ransomware gangs a wide berth.

What This Means for You

While Q4 saw increased scrutiny on some ransomware operations, stopping ransomware is like a game of Whac-A-Mole. When one group gets exposed or dissolved, the operators and resources just reemerge as a new brand. Ransomware isn’t going away anytime soon, and the stakes for companies who fall victim are only higher with new sanctions. All this makes investing in ransomware protection all the more necessary.

Free Image Hosting With Cloudflare Transform Rules and Backblaze B2
Next Post: What Is Private Cloud Storage?