CrunchGear published that the National Security Agency (NSA) is forecasting it may need yottabytes of storage to keep all of its surveillance data by 2015.

What is a yottabyte? 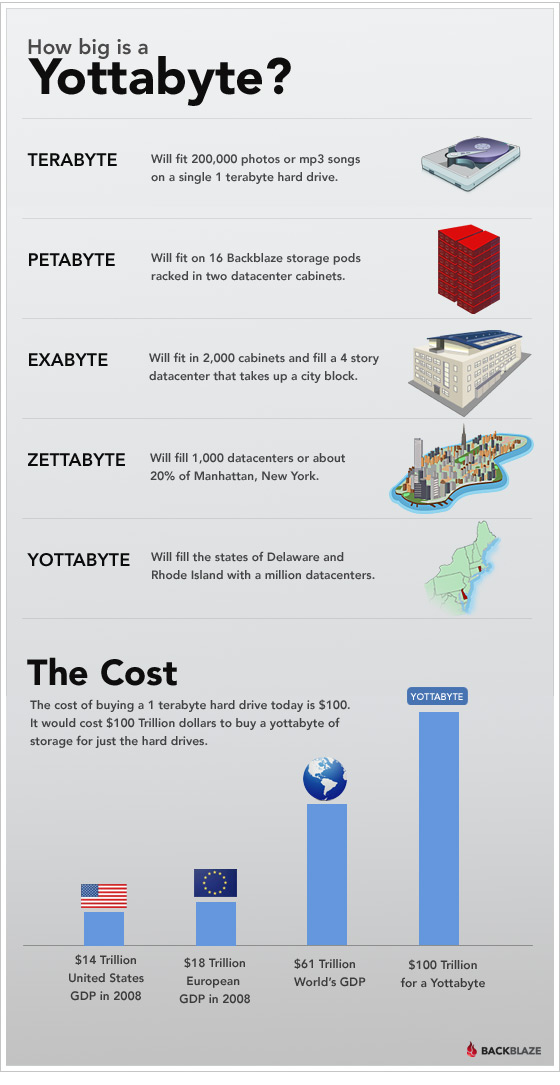 On the one hand, what makes this even tougher is that typical storage systems cost 10 times the price of the raw hard drives. Thus, the likely actual cost of storage for the NSA is $1,000 trillion for a complete storage system.

The NSA may need to partner with NASA to see if it can spin off about 15 more planet Earth’s so their combined GDP could pay for its storage requirements.

On the other hand, this is based on prices and storage technology in 2009. But the cost per gigabyte has dropped consistently 4% per month for the last 30 years. Assume the trend continues for the next five years, by the time the NSA needs their yottabyte of storage. Then costs in 2015 would be $8 trillion for the raw drives or $80 trillion for a storage system.

Per historical metrics, a drive should hold 10 terabytes by 2015. The NSA would require 100 billion hard drives or two billion Backblaze Storage Pods.

And of course, they would probably want this data backed up.
That might really test our offer of $5 for unlimited storage.

To be fair, the original analysis states that the need for yottabytes of information may not be accurate because it assumes that data is collected in a way similar to today. Instead, it purports they may only need hundreds of petabytes of data storage by 2015; significant, but completely manageable. Hard drives are also the assumed technology—which has been a good assumption for 30 years and may continue to be a good one for the next five years. SSD and other technologies may provide some interesting options, but in the near term, the price and density winner will likely continue to be spinning platters.

Regardless of how much data the NSA ends up needing to store, could we perhaps recommend a storage design? ;-)