Backblaze had a large presence at Macworld 2014 this year, and we had a great time at the show. We love going to Macworld and spreading the good word about online backup. We spoke with lots of interesting people, met with tons of Backblaze users, and even got some of them on film. One of the questions that we kept getting, though, was, “Where did we get that big ‘B?’” 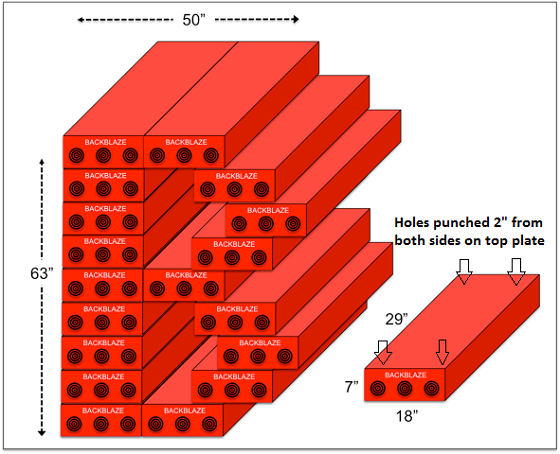 Based on my napkin drawing, Andy’s blueprints that we sent to our vendors.

A few weeks before the show, a large space opened up and we were given the opportunity to occupy it. We debated for a few days about whether or not it was a good idea to go that big, but ultimately we decided to go for it. After all, how often do you get a chance at a primo spot on the Macworld floor? But then we were faced with a problem. With large booths come large responsibilities. What were we going to do with all that newfound space?

We started brainstorming in the office, but the best idea came from our CEO’s wife, Katia. Gleb came in to the office and said, “Katia thinks it would be pretty cool if we built a giant ‘B’ out of our Storage Pods.” This got the wheels turning and we decided that we were going to try and pull it off, with two weeks to go before the show.

I immediately started down the path of working with our existing Pod builders to see if it would be possible to build 18 chassis (by my estimation) and set them up in a way that would resemble a big letter “B,” for Backblaze. I drew it on a napkin, Andy made a schematic (seen above) and we sent it to our vendors. 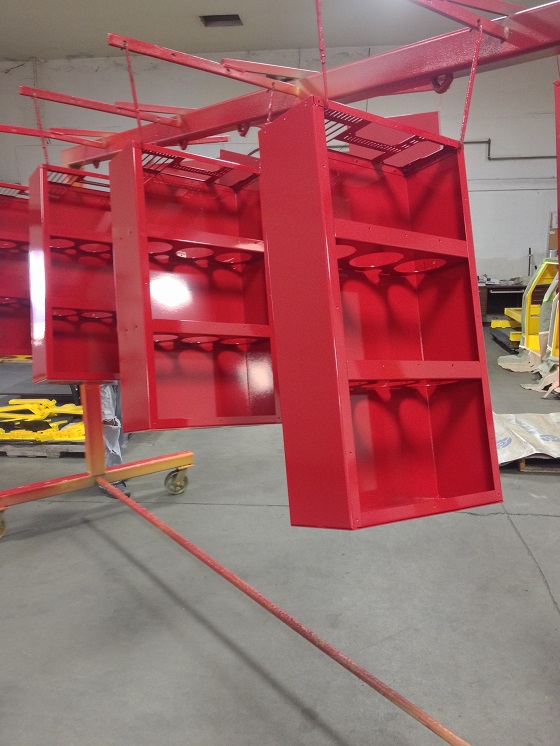 Looks good in red! Click here for a video of the painting process.

It quickly became apparent that our existing vendors weren’t going to be able to get it done in time without affecting our regular Storage Pod deliveries, so we had to think quickly and come up with a new place to get our Storage Pods bent in to shape. 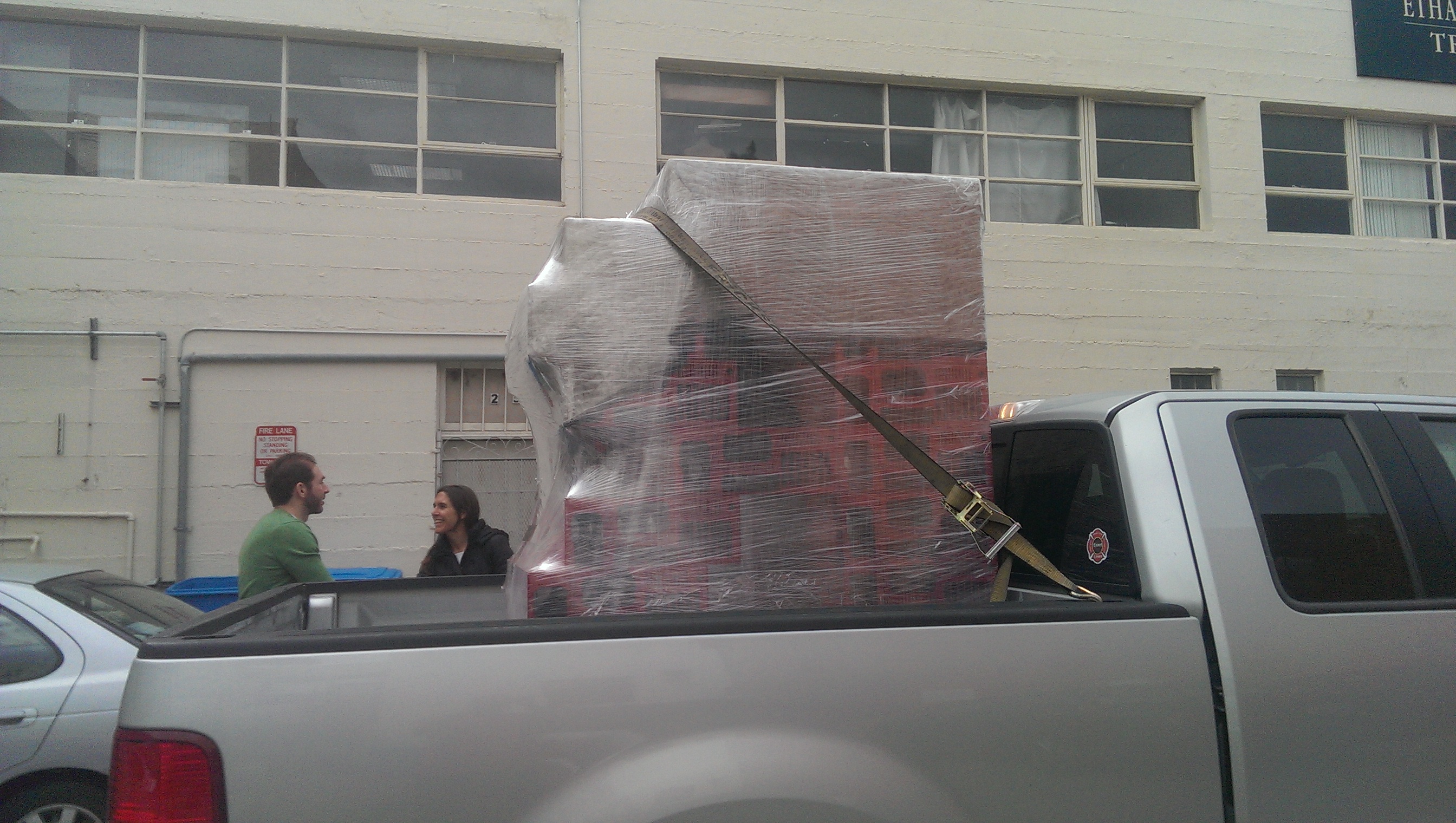 Taking delivery of the “B.”

Our savior came in the form Ally Bocchieri, of Power10 Sales, who found us Exact Corp, a farming equipment manufacturer. A weird choice? Not really! We needed metal bent. They bend metal. We had a two week deadline. They promised they could deliver on time. Perfect! 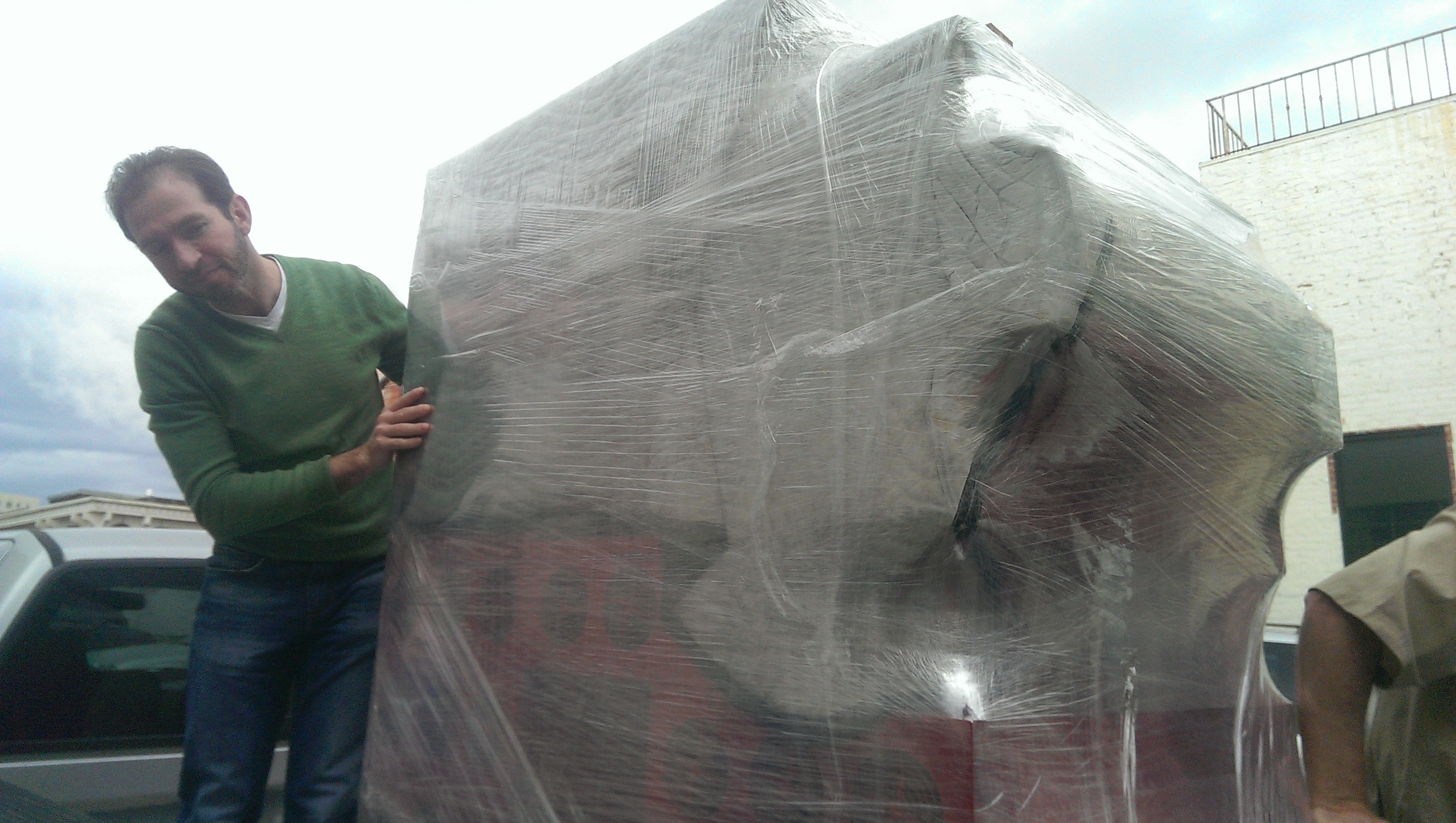 Unloading the 300 lbs “B” is a team effort. Backblaze CEO, Gleb, helps push.

I had a little request of them as well. We’ve never actually seen what it looks like when our Storage Pods were assembled, and while these Pods are for display only and will never go in to production, I asked Exact to take a few pictures of the Pods being assembled, and just like the “B,” they delivered. A big thank you to Exact, who not only delivered the “B” ahead of schedule, but also provided the documentation of its construction which helped make this our most memorable Macworld ever! Enjoy the photos below and live the life of the Backblaze B. 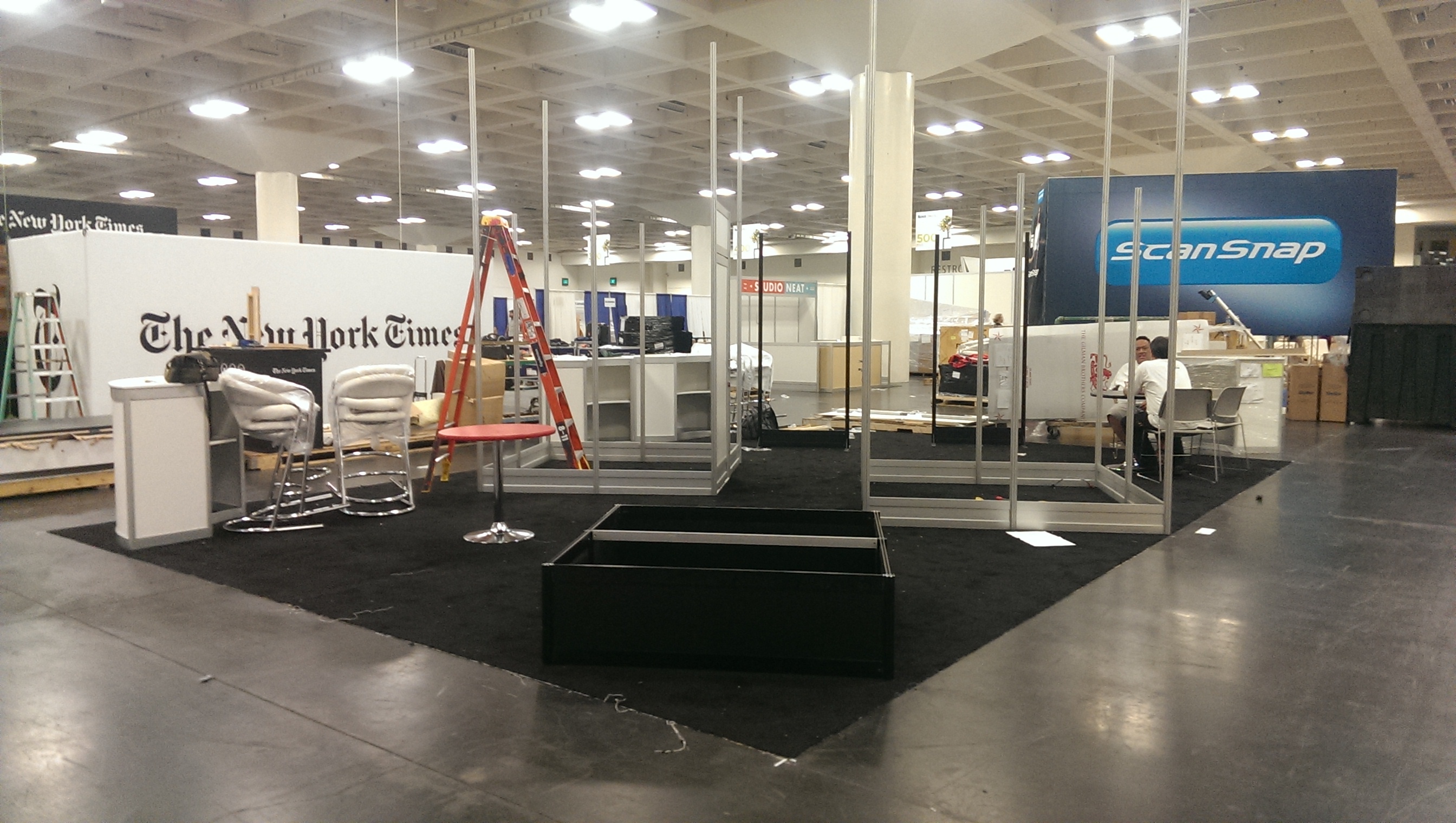 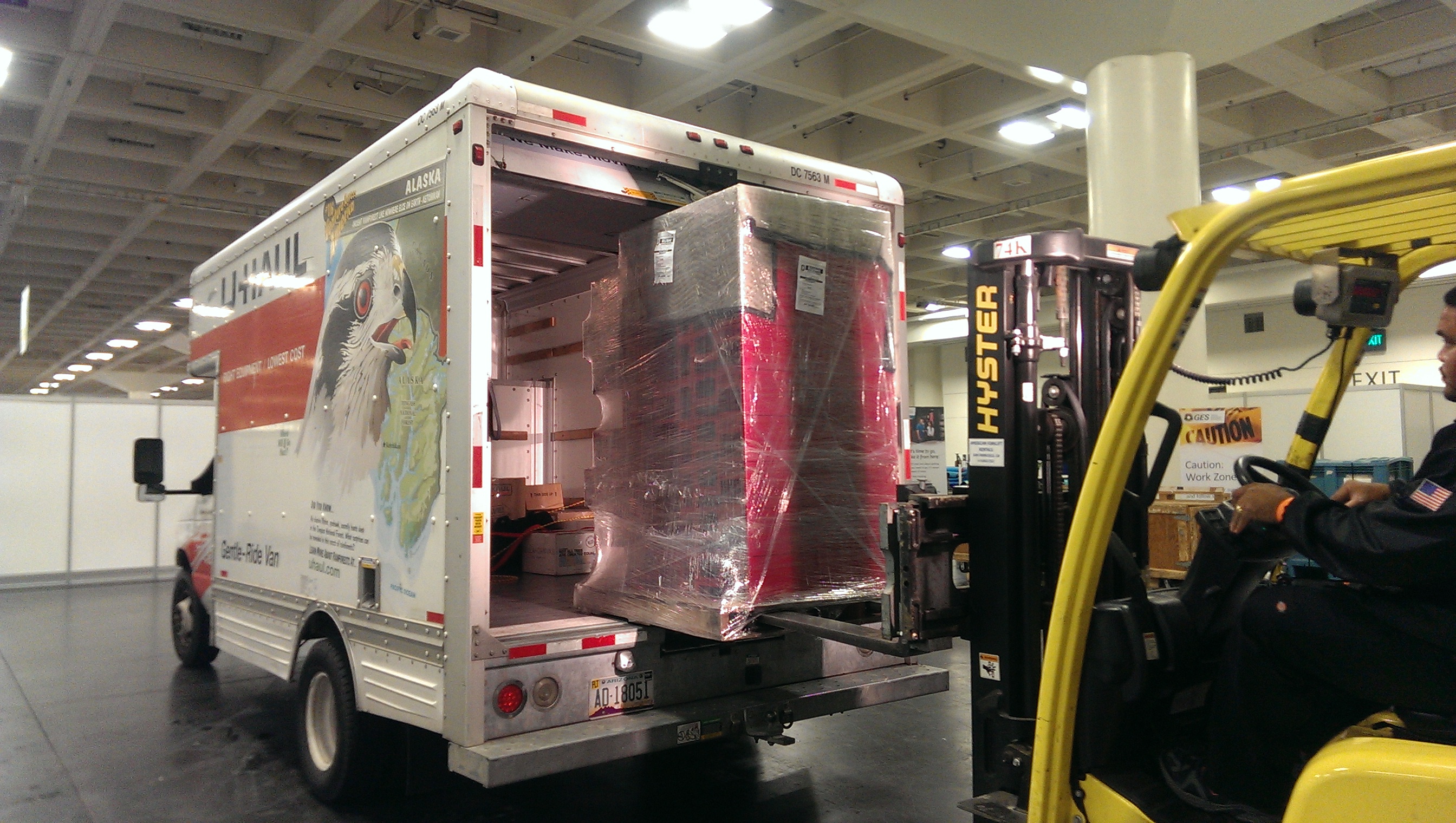 One of the scarier unloading moments. 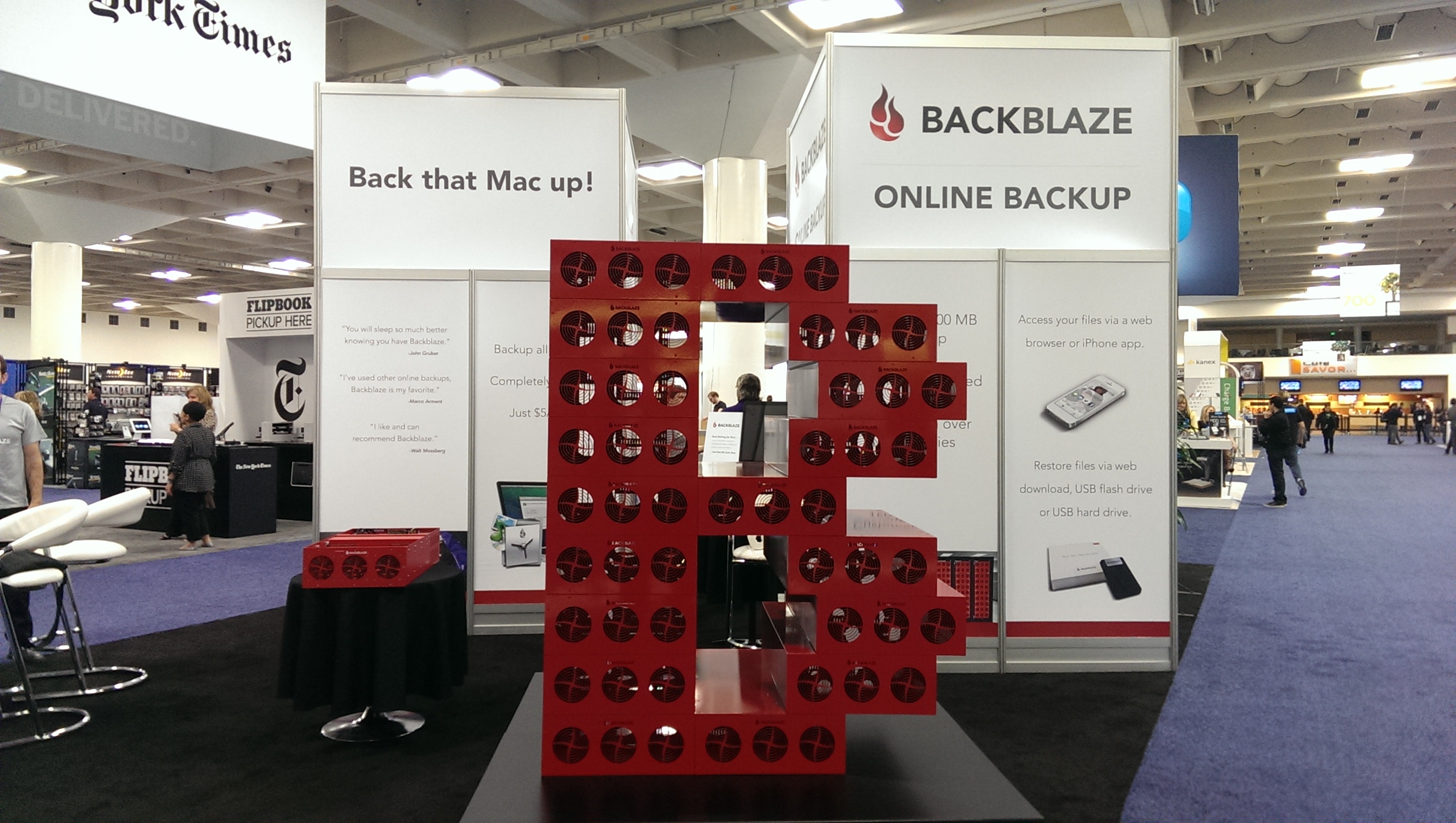 What people saw when they walked on to the show floor. Great placement! 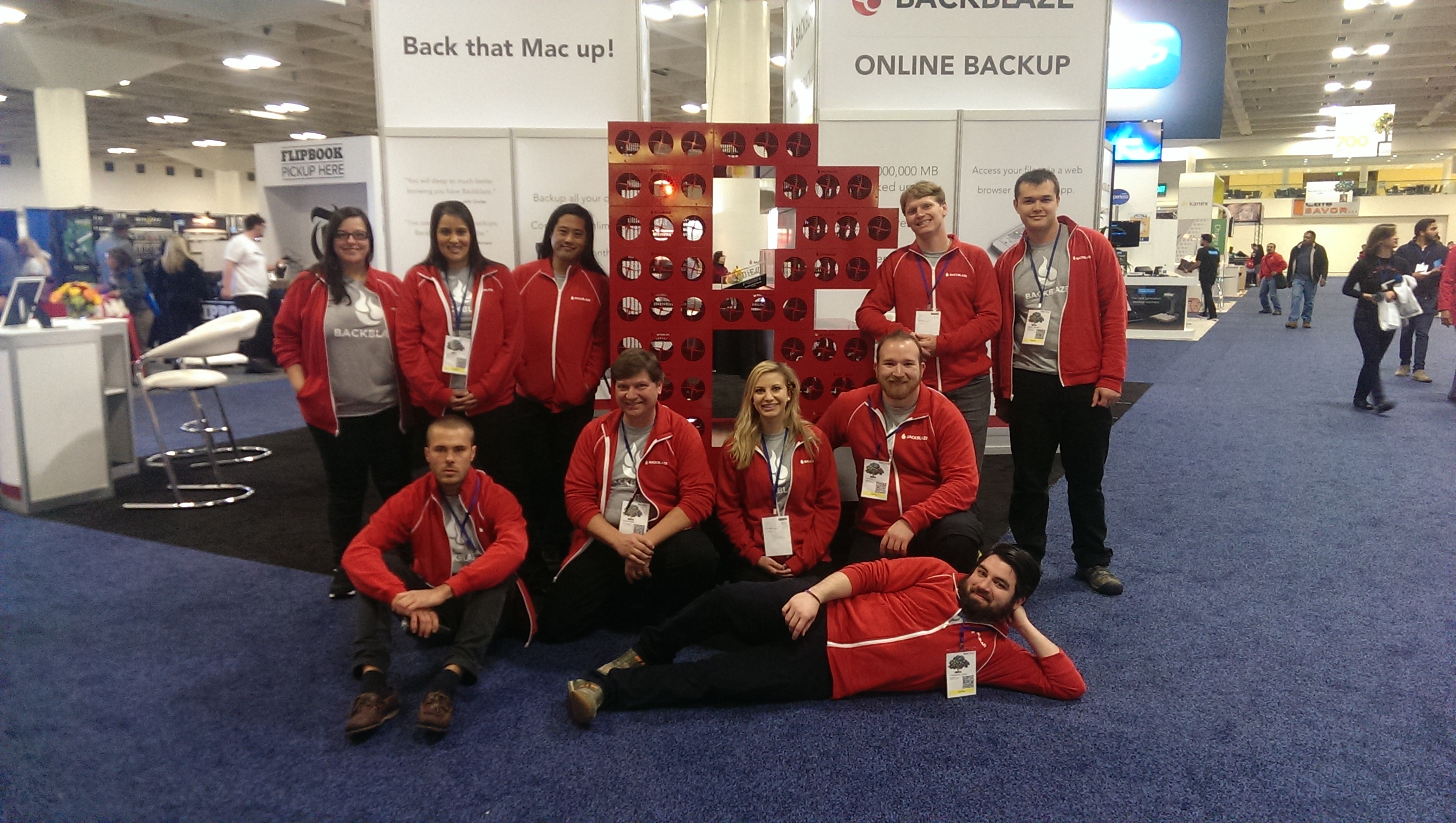 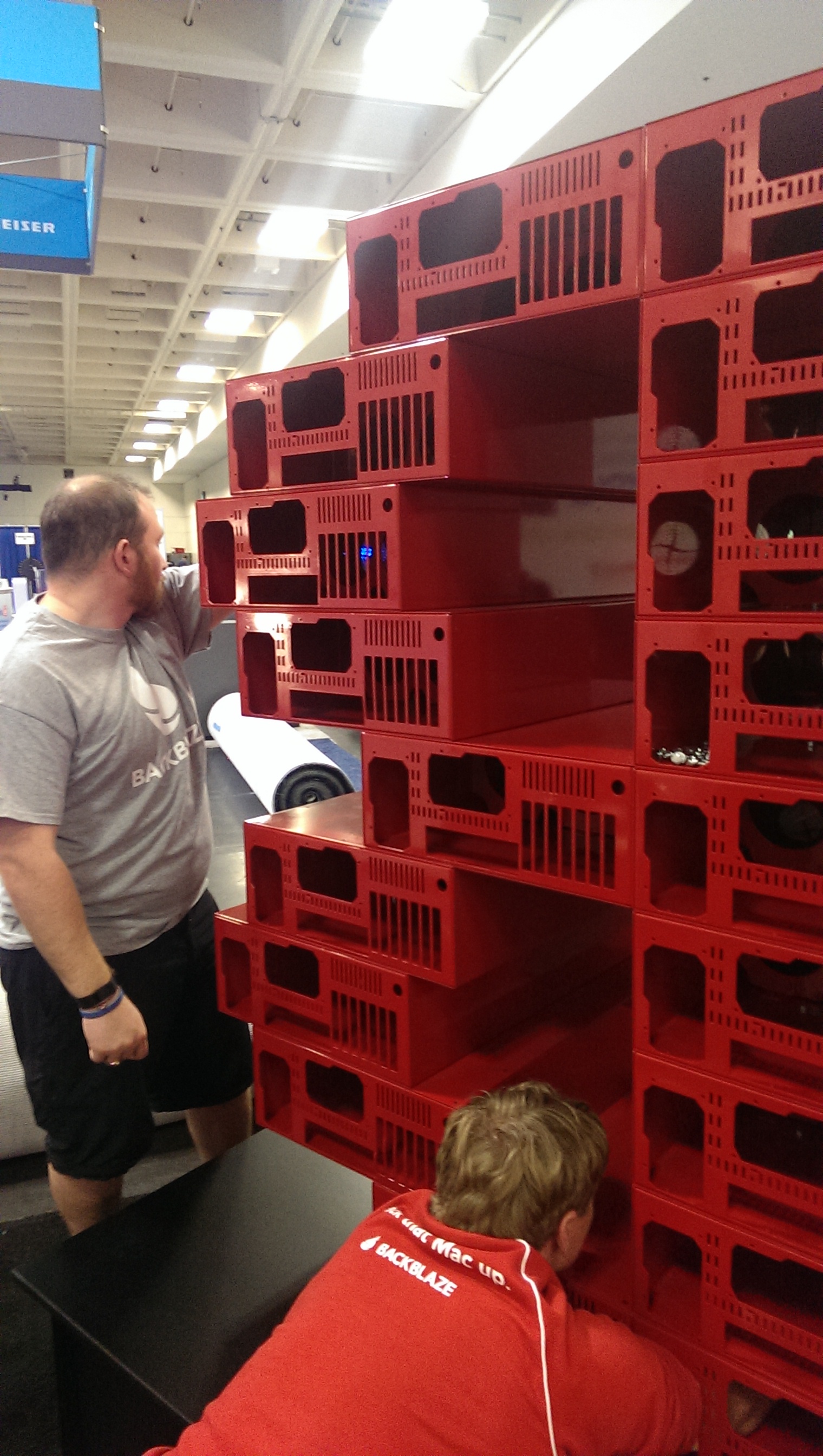 Data center Dave starts taking apart the “B” for transportation out of Macworld. 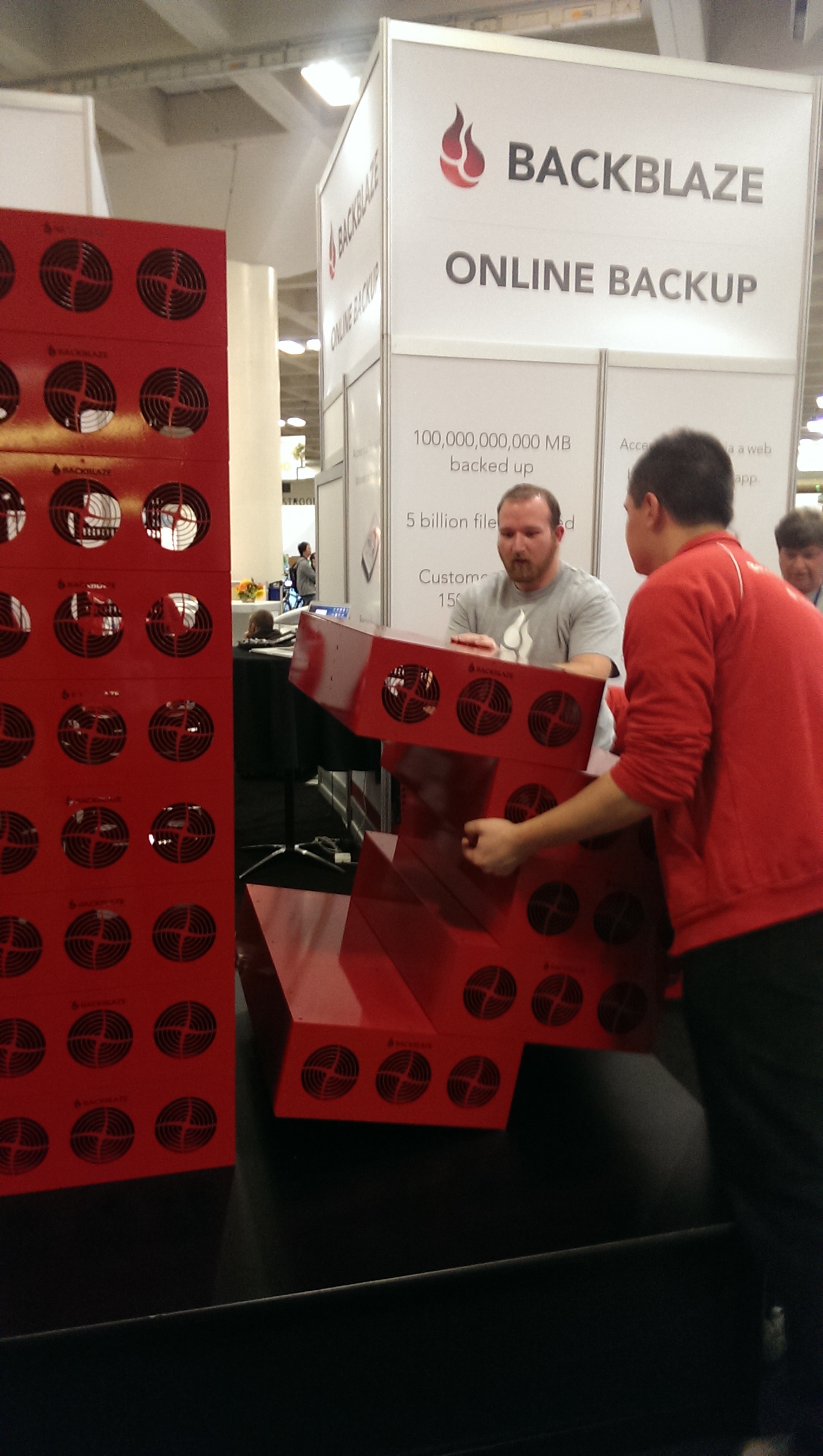 The B comes apart. 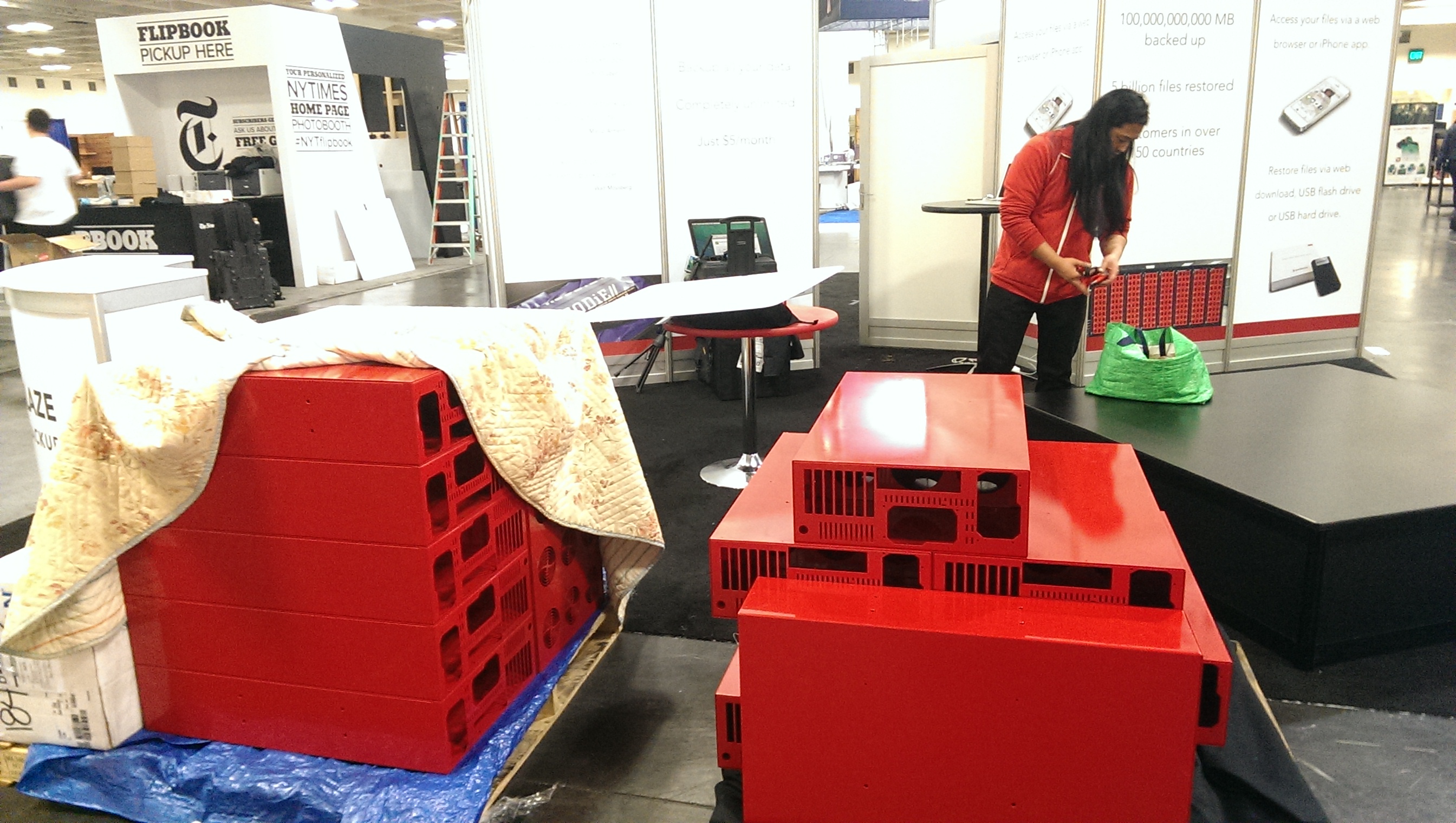 Loading the “B” on pallets for the return trip. 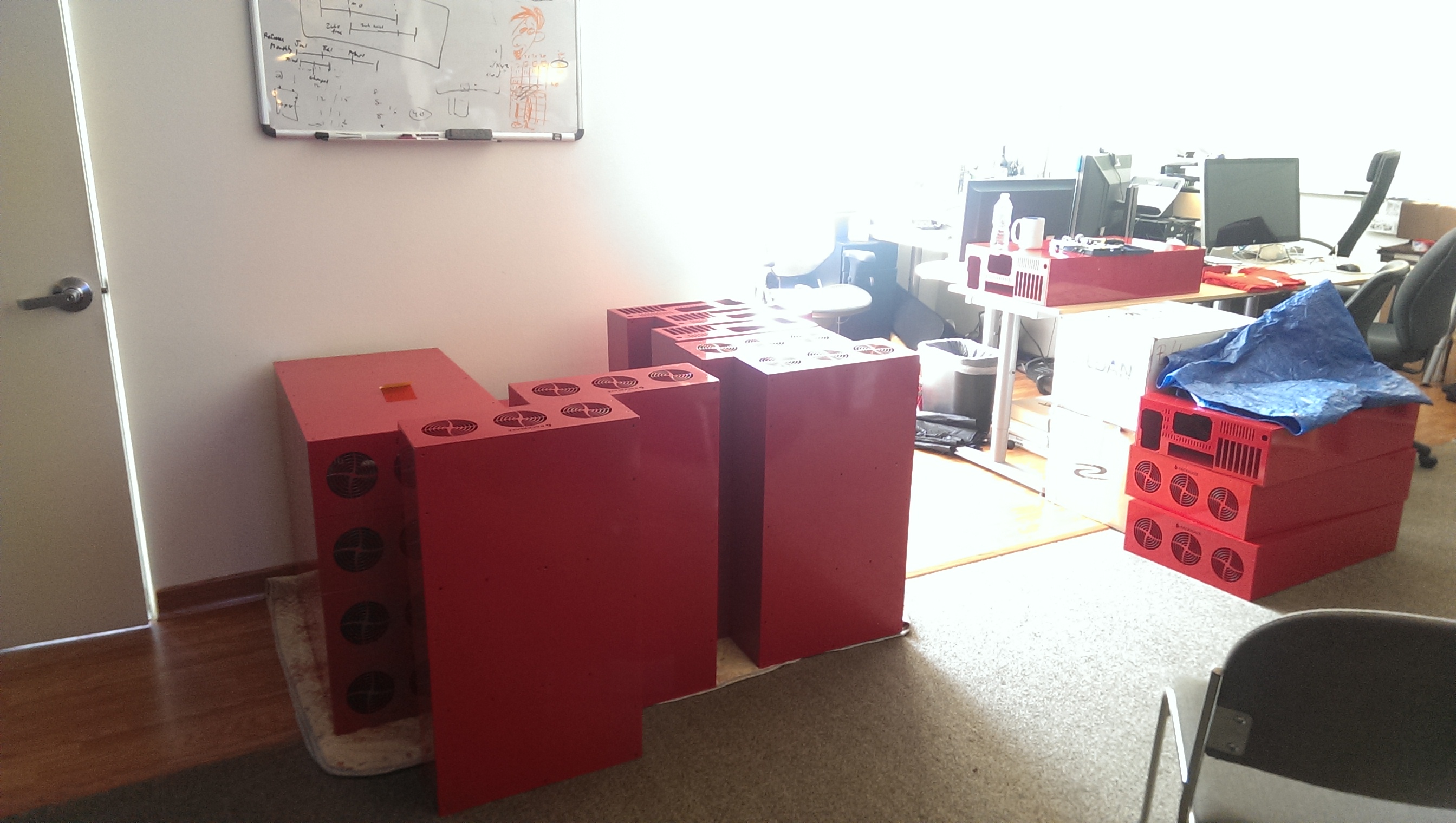 Luckily, the pieces made the journey home safe and sound. 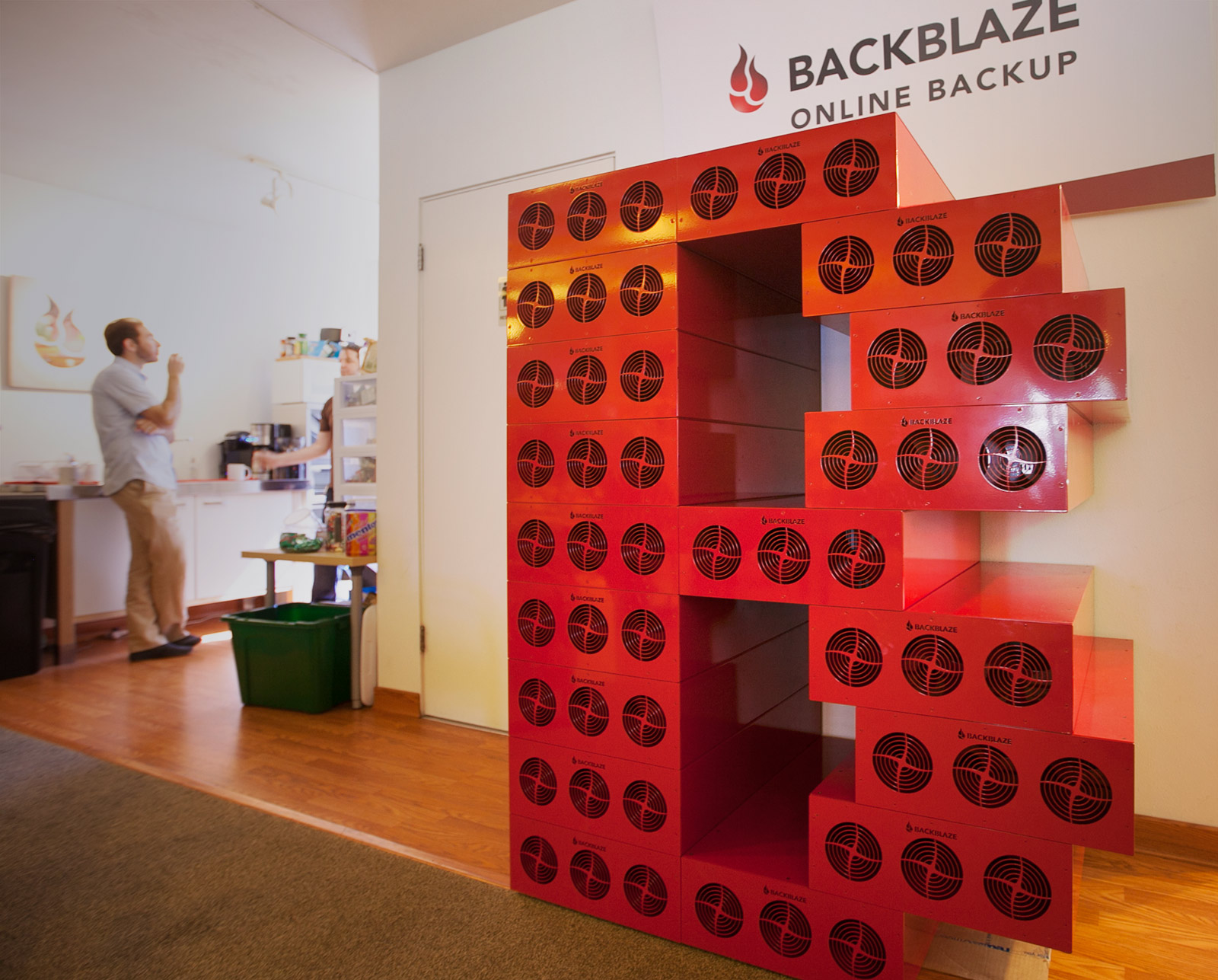 The “B”‘s fabulous new home at the Backblaze office.

Backblaze Was Always Safe From Heartbleed
Next Post: Release 2.5.1