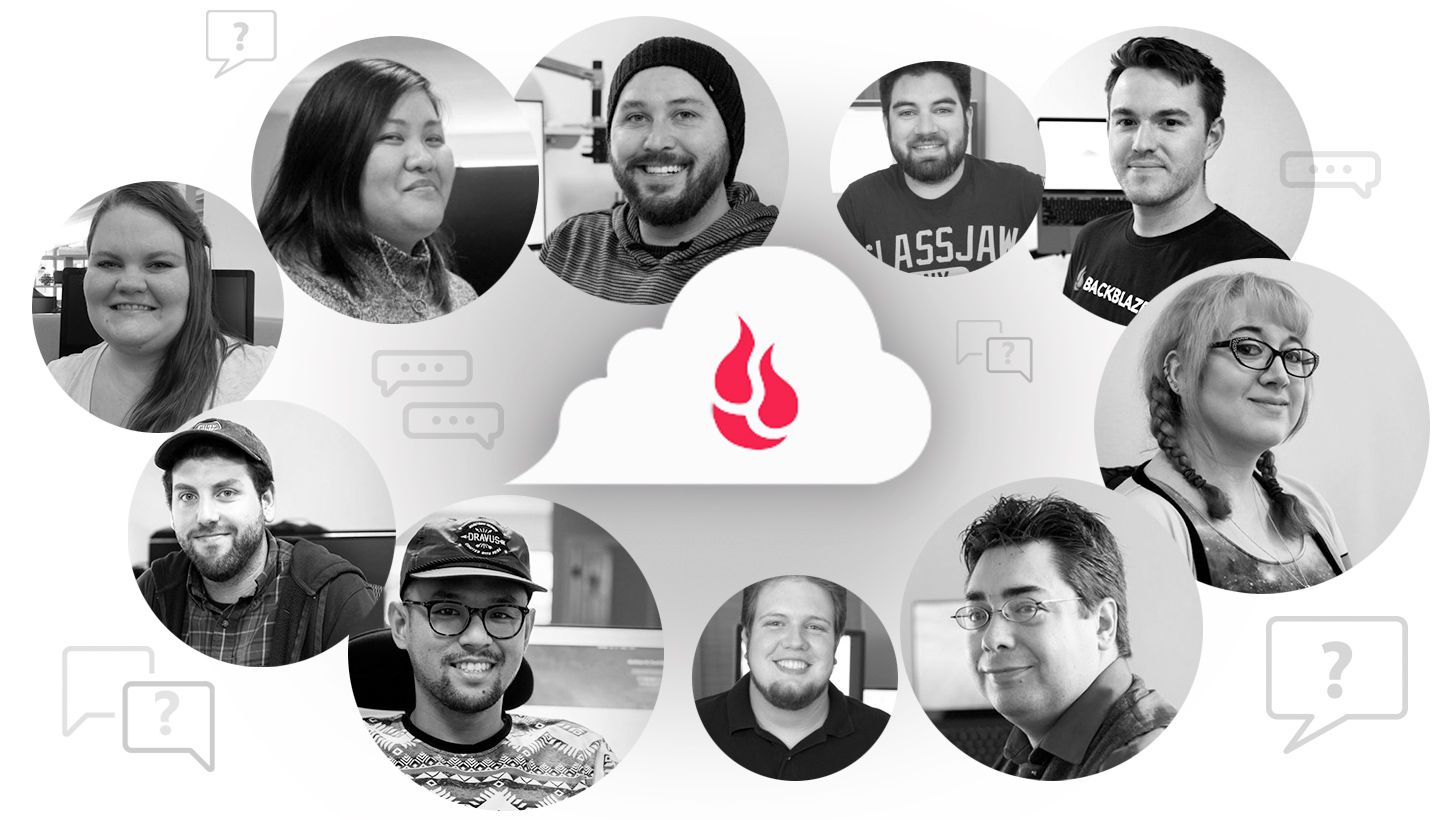 At Backblaze, we’re exceedingly proud of our on-site, US-based Support team. These often-unsung heroes are our first responders for technical issues and customer complaints. They shoulder the majority of whatever negative feedback we receive and often take lead on reporting the most critical performance issues to our engineering staff. With a team of just 14, they quietly solve thousands of problems on a weekly basis, all while keeping things impressively fun.

So we wanted to take a moment to call attention to the amazing feats that Support achieves every day, because it feels like their superhuman efforts, and the quirky culture they’ve spawned, sometimes fly under the radar. In short, we wanted to offer a little “support” to Support.

Most customers that have technical issues while using Backblaze contact Support by either sending in a ticket or chatting live with a Support Technician. Support Techs are available to share their knowledge and help customers seven days a week; they’re committed to responding to tickets within 24 hours; and they will respond to chats in real-time (provided they’re received during work hours). Other than our on-call staff, the Support team is one of only two departments at Backblaze (the other being our Data Center Team) that has staff officially on the clock every day of the week.

But How Does it Really Work?

The Support team uses Zendesk, a customer service management application, to handle their workload. When a customer submits a ticket, it gets distributed to the next available Support Technician. Same with chat—as users reach out, they get routed to whoever is available for a response. What this means is that new challenges flow into each of the Tech’s queues all day long. They address the issues as they arrive and work to close out each one in turn.

The team helps customers with technical issues about anything and everything. Some questions are fairly straightforward—covering topics like storing data, ensuring that a hard drive is backed up, or backing up a new computer. Other questions, especially those related to B2, our cloud storage product, can get a bit more complex. Queries range from simple (“How do I archive disk images of my servers on B2”), to complex (“I need to set up a content delivery network and make sure that I can economically distribute this video file that I am creating”).

Ryan Kilby, a former member of the Support team who now works in one of our data centers, described how the two teams had different vibes to them. While the data center staff is more project-oriented, with a team that bands together to finish big projects, the support team constantly manages a stream of incoming inquiries, which they mostly have to deal with individually.

The queries come from customers as well as administrators from business accounts. While most of the team can answer questions related to all Backblaze products, a few of the Techs focus on specific areas like business or B2. And whenever they aren’t sure of an answer, they make good use of their shared office space to call out questions and pass off tickets to one another, depending on whatever expertise might be required.

“I’m really proud of the support team,” Brian Wilson, our Co-founder and CTO, said when I interviewed him recently, “because a lot of tech support organizations are based on the idea of what I call ‘turfing the customer,’ which is when you delay and push the customer instead of truly trying to help them. Eventually, they just gives up in frustration at least 50% of the time. That becomes a support case that is ‘closed’ because the customer gave up. Our team, on the other hand, does a really good job of getting to the root cause of what’s going on and solving the problem.”

Other cloud storage companies don’t even have support for a majority of their customer base. Instead, they push off customers to user-moderated forums. But that’s not the Backblaze way. We believe in being actively present for our customers, both to help them as individuals, but also to assist the tens of thousands of other customers who won’t suffer from technical issues because support helps us stay ahead of potential issues. That’s because, aside from resolving issues for customers, the team also plays a role in deciding which bugs get fixed, and when.

When the team leads notice that something is consistently causing issues for customers, they will bring it up so that the engineers can fix the problem. From this point of view, the Support Team could be congratulated for closing ten times the number of tickets that they’re actually credited for: By flagging issues as they begin to crop up, they solve future problems before they’re even logged. (Yes, we’re essentially saying that Support has the ability to time travel.)

Last Fall, the Support team cleared an impressive milestone: 500,000 support tickets! If this is the number of problems they’ve managed, just imagine how many more they helped prevent by ensuring our team was fixing bugs and dealing with other issues as fast as possible.

In the early days of Backblaze, Brian Wilson understood the hardships that came along with serving in support and worked to ensure that our Technicians were well taken care of. For instance, to reward them for their hard work, he bought gaming computers for the first five Technical Support Agents. That might seem like an odd perk until you understand something about a large portion of the Support team: They live for games.

The quirky culture of Support took root when the first three Technicians discovered that they all had a passion for the same video games. They enjoyed playing “Left 4 Dead”, “Starcraft”, and “Age of Empires.” One of the first members of the Support team, Yev Pusin, now our Director of Marketing, explained, “Support can be a little bit of a draining role. But the video games seemed to help.” Before gaming was introduced, the team would often just wait between tickets and chats for the next issue to come in, but games gave them a moment to reset and refresh, ensuring that they would be in a good head space for the next customer.

“They’ve done a really good job of maintaining morale,” Yev continued, describing the current support team, “but their methods have evolved in some ways. They still play video games and they still order pizza in, but the types of games that they play have changed.” Today, the employees trend toward tabletop RPGs, and especially love “Dungeons and Dragons”—though this is typically an after-hours exploit. (Yes, our support team has such a healthy culture that they elect to spend free time together, too.)

And yet, while there are favored distractions among the team members, this is an equal opportunity gaming culture. While others spend time playing board games, Annalisa Penhollow, our Senior Support Technician, loves playing “The Sims.” She explained how the game helps her cope with the emotional hardships of her job: “It’s a good distraction. It gets my mind off of whatever complaint or issue I have to deal with. It might not be for very long; it might just be like a minute or two, but even then, it helps me cool down before I deal with the next thing.”

When agents have the chance to take a breather, they respond to the next user in a calmer manner, which ultimately helps the person on the other end of a ticket or a live chat. “We have a chance to make sure that we’re in the best mindset possible to provide the best support to our customers,” Zack Miller expanded. “We aren’t just trying to get through our day, we’re not just trying to survive getting through everyone’s issues—we have a chance to be in the right mindset to actually provide help.”

In addition to the games and activities, Miller is also happy to report that the team has fostered a flexible work schedule. If employees need to be out for some reason, take time off, or just work from home, the team can work around that. That means that they can either be answering tickets from the office, their couch, or anywhere around the world. 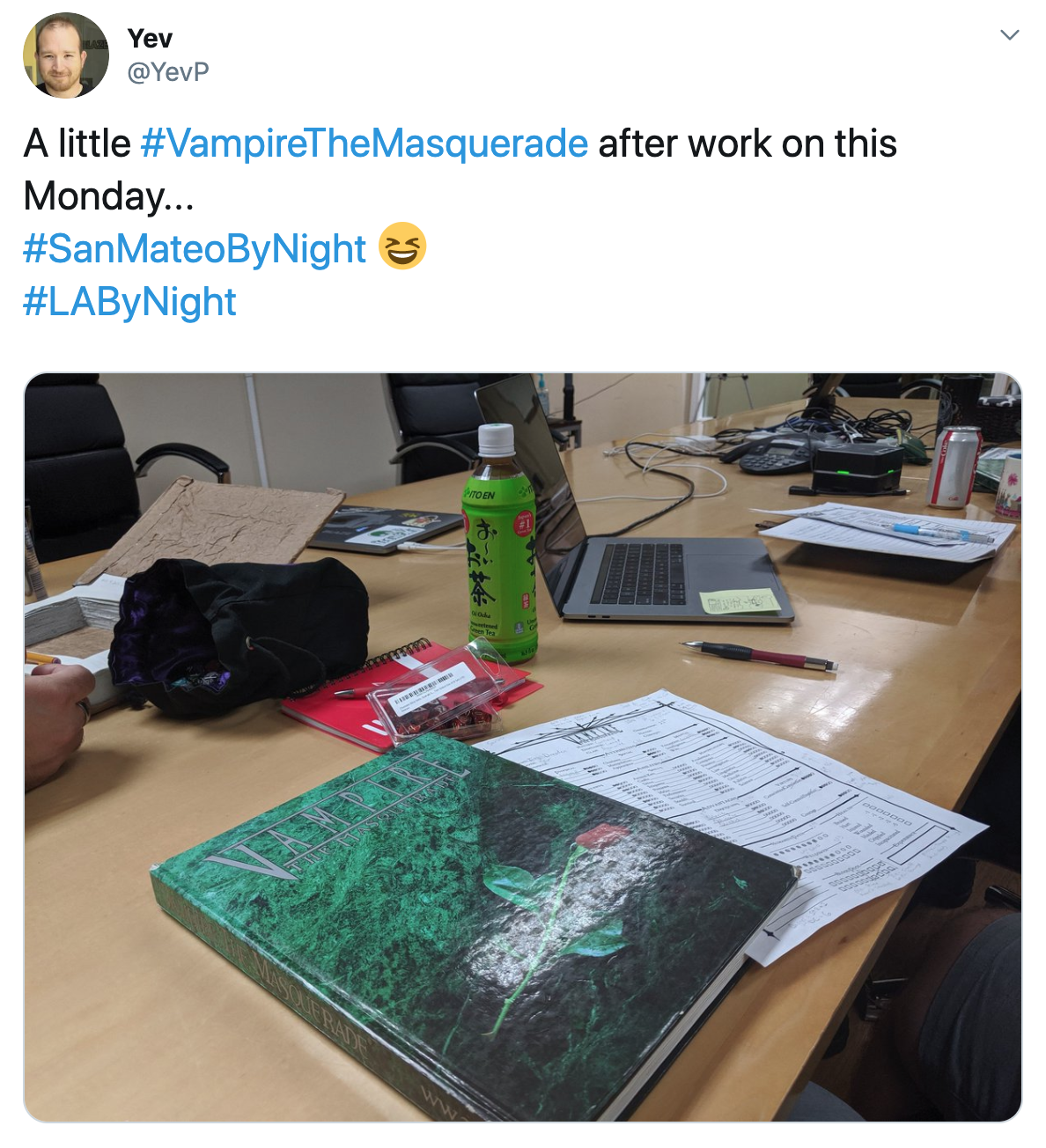 Support jobs are difficult, but Backblaze believes that they are a critical element of our service. As a result, the company ensures that the team has what they need to provide the best service possible. Whether they need to play a game to cool down or work from home for a few days, Backblaze accommodates them. And we’re always hiring more Support Technicians. If you are interested in joining our support team at Backblaze, please feel free to send your resume to jobscontact@backblaze.com! We look forward to hearing from you.

Otherwise, join us in simply thanking Support for all their great work. We wouldn’t be Backblaze without them. 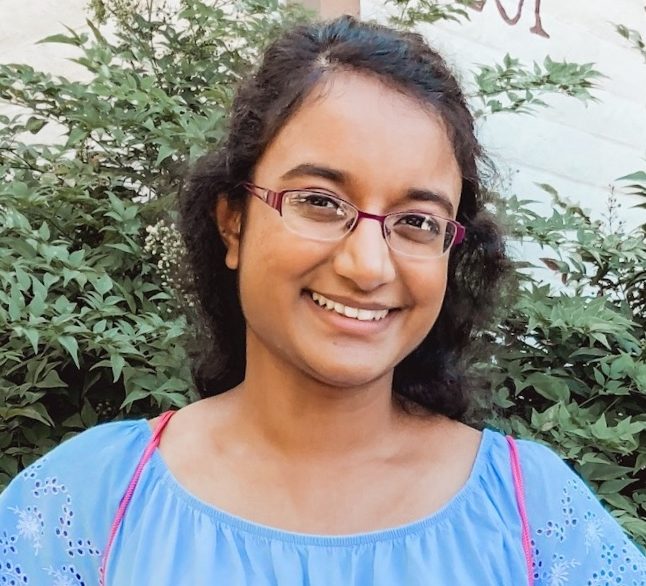 The Argument Against Commission: Why Backblaze Pays Sales a Full Salary
Next Post: Drive Stats Update