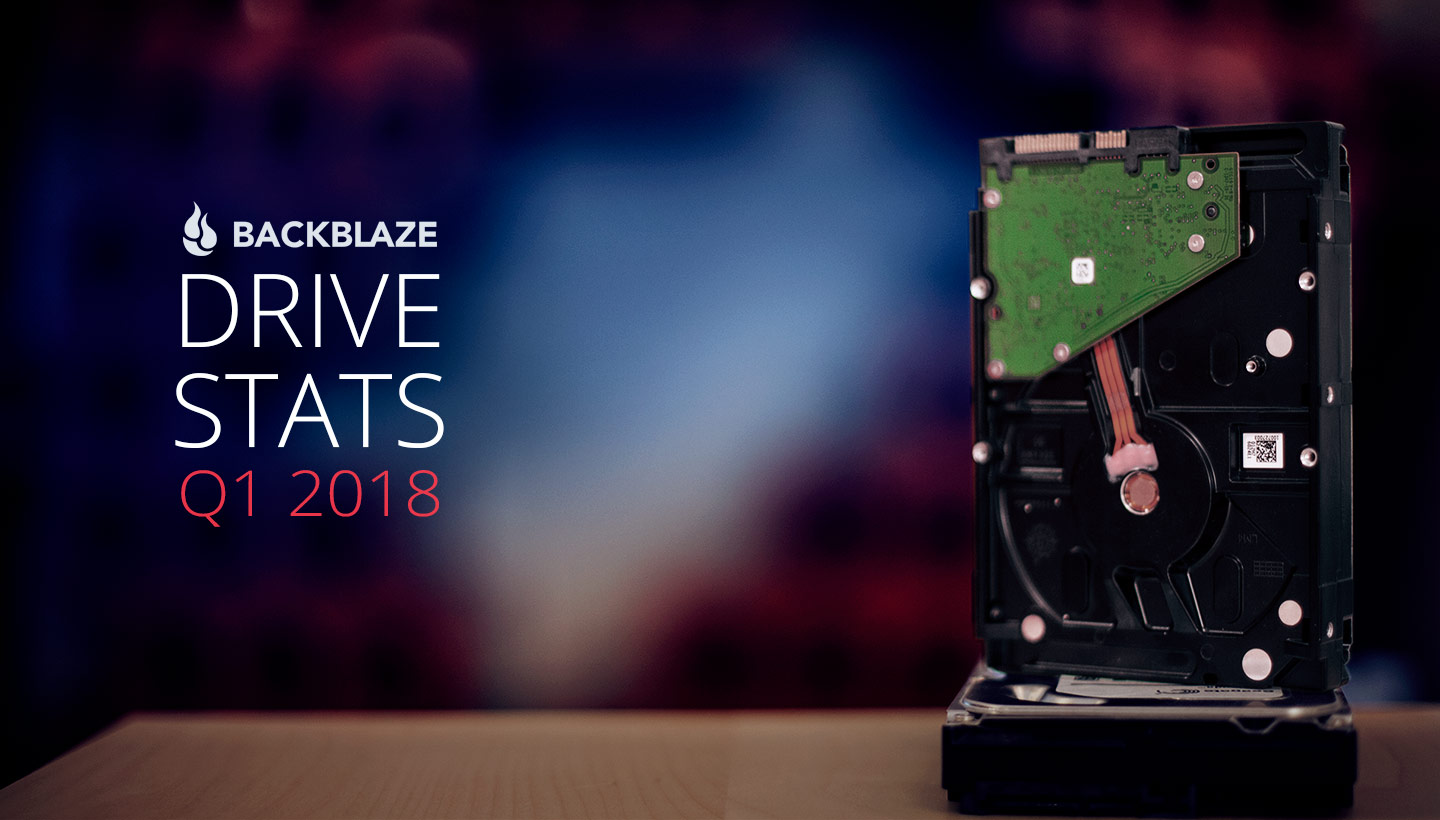 As of March 31, 2018 we had 100,110 spinning hard drives. Of that number, there were 1,922 boot drives and 98,188 data drives. This review looks at the quarterly and lifetime statistics for the data drive models in operation in our data centers. We’ll also take a look at why we are collecting and reporting 10 new SMART attributes and take a sneak peek at some 8 TB Toshiba drives. Along the way, we’ll share observations and insights on the data presented and we look forward to you doing the same in the comments.

Since April 2013, Backblaze has recorded and saved daily hard drive statistics from the drives in our data centers. Each entry consists of the date, manufacturer, model, serial number, status (operational or failed), and all of the SMART attributes reported by that drive. Currently there are about 97 million entries totaling 26 GB of data. You can download this data from our website if you want to do your own research, but for starters here’s what we found.

At the end of Q1 2018 Backblaze was monitoring 98,188 hard drives used to store data. For our evaluation below we remove from consideration those drives which were used for testing purposes and those drive models for which we did not have at least 45 drives. This leaves us with 98,046 hard drives. The table below covers just Q1 2018. 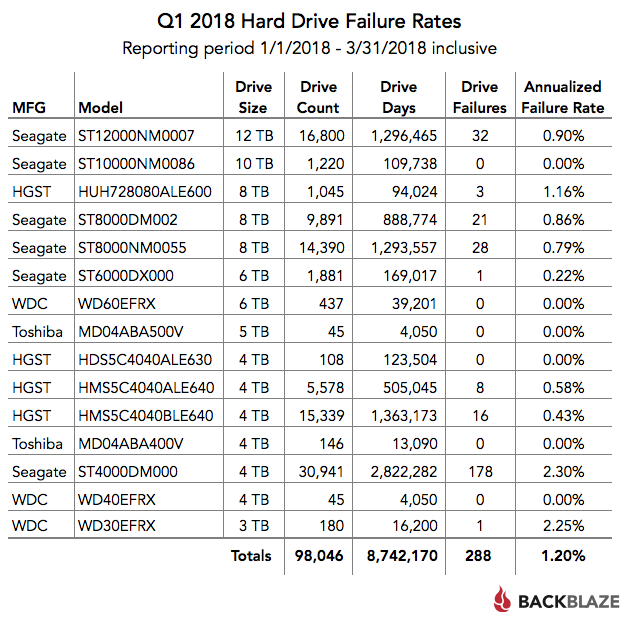 If a drive model has a failure rate of 0%, it only means there were no drive failures of that model during Q1 2018.

The overall Annualized Failure Rate (AFR) for Q1 is just 1.2%, well below the Q4 2017 AFR of 1.65%. Remember that quarterly failure rates can be volatile, especially for models that have a small number of drives and/or a small number of Drive Days.

There were 142 drives (98,188 minus 98,046) that were not included in the list above because we did not have at least 456  of a given drive model. We use 45 drives of the same model as the minimum number when we report quarterly, yearly, and lifetime drive statistics.

We mentioned Toshiba 8 TB drives in the first paragraph, but they don’t show up in the Q1 Stats chart. What gives? We only had 20 of the Toshiba 8 TB drives in operation in Q1, so they were excluded from the chart. Why do we have only 20 drives? When we test out a new drive model we start with the “tome test” and it takes 20 drives to fill one tome. A tome is the same drive model in the same logical position in each of the 20 Storage Pods that make up a Backblaze Vault. There are 60 tomes in each vault.

In this test, we created a Backblaze Vault of 8 TB drives, with 59 of the tomes being Seagate 8 TB drives and 1 tome being the Toshiba drives. Then we monitored the performance of the vault and its member tomes to see if, in this case, the Toshiba drives performed as expected.

So far the Toshiba drive is performing fine, but they have been in place for only 20 days. Next up is the “pod test” where we fill a Storage Pod with Toshiba drives and integrate it into a Backblaze Vault comprised of like-sized drives. We hope to have a better look at the Toshiba 8 TB drives in our Q2 report — stay tuned.

While the quarterly chart presented earlier gets a lot of interest,   the  real test of any drive model is over time. Below is the lifetime failure rate chart for all the hard drive models which have 45 or more drives in operation as of March 31st, 2018. For each model, we compute their reliability starting from when they were first installed.

The failure rates of all of the larger drives (8-, 10- and 12 TB) are very good, 1.2% AFR (Annualized Failure Rate) or less. Many of these drives were deployed in the last year, so there is some volatility in the data, but you can use the Confidence Interval to get a sense of the failure percentage range.

Our regular readers and drive stats wonks may have noticed a sizable jump in the number of HGST 8 TB drives (model: HUH728080ALE600), from 45 last quarter to 1,045 this quarter. As the 10 TB and 12 TB drives become more available, the price per terabyte of the 8 TB drives has gone down. This presented an opportunity to purchase the HGST drives at a price in line with our budget.

We purchased and placed into service the 45 original HGST 8 TB drives in Q2 of 2015. They were our first Helium-filled drives and our only ones until the 10 TB and 12 TB Seagate drives arrived in Q3 2017. We’ll take a first look into whether or not Helium makes a difference in drive failure rates in an upcoming blog post. [Post is now published: The Helium Factor and Hard Drive Failure Rates. — Editor]

If you have previously worked with the hard drive stats data or plan to, you’ll notice that we added 10 more columns of data starting in 2018. There are 5 new SMART attributes we are tracking each with a raw and normalized value:

The 5 values are all related to SSD drives.

Yes, SSD drives, but before you jump to any conclusions, we used 10 Samsung 850 EVO SSDs as boot drives for a period of time in Q1. This was an experiment to see if we could reduce boot up time for the Storage Pods. In our case, the improved boot up speed wasn’t worth the SSD cost, but it did add 10 new columns to the hard drive stats data.

Speaking of hard drive stats data, the complete data set used to create the information used in this review is available on our Hard Drive Test Data page. You can download and use this data for free for your own purpose, all we ask are three things: 1) you cite Backblaze as the source if you use the data, 2) you accept that you are solely responsible for how you use the data, and 3) you do not sell this data to anyone. It is free.