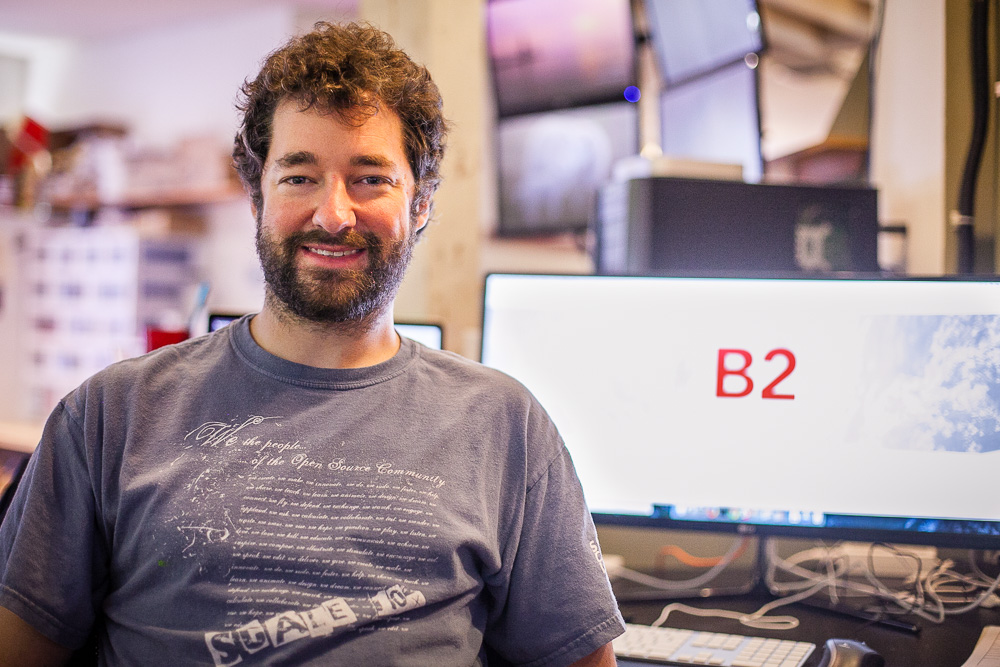 Elliott comes to us from Facebook as a referral by Chuck, who was referred to us by… Elliott! Life is cyclical after all! Elliott’s already hit the ground running and is already all up in our systems. Like Chuck he likes car racing, and he just happens to be our first Mountain Dew drinker in the office! Let’s learn a bit more about Elliott, shall we?

What is your Backblaze title?
I’m a Senior Sysadmin, which basically means “make the servers work.”

Where are you originally from?
I was born in Tulsa, Oklahoma and lived there until moving out to the SF Bay Area in 2009.

What attracted you to Backblaze?
I actually originally ran across the job ad while looking for the blog entry about hard drive reliability after mine died. Sure enough, it was one of the infamous Seagate 3TB ones. I’d been thinking about moving to a smaller company for a while, and really liked how open Backblaze is and that they sell a useful service to people outside the Silicon Valley bubble.

What do you expect to learn while being at Backblaze?
Storage. Lots of Storage. RAID, Reed-Solomon, and controller and drive failure modes.

Where did you go to school?
I went to the University of Tulsa off and on for a while, but ended up leaving before graduating. Tuition’s a harder expense to justify in an industry where all the job entries say “…or equivalent experience.”

What’s your dream job?
Hmm, that’s a tough one. I like helping and making things work better, especially if they’re failing in complicated and hard-to-track-down ways. Really, pretty much the jobs I’ve had since moving to the area have been dream jobs. Smart co-workers and interesting problems.

Favorite place you’ve traveled?
Either St. John in the USVI, which is just beautiful both on land and in the ocean, or Yellowstone for the strangeness.

Of what achievement are you most proud?
Dodging this question in a clever way.

“Star Trek” or “Star Wars”?
Yes, although I sometimes feel like I’m a terrible geek for having only seen a little of TNG and basically none of the rest.

Favorite food?
Hmm… Tough to pick just one, but I’m a sucker for anything with pesto or garlic.

Anything else you’d like you’d like to tell us?
What, answering all the other questions wasn’t enough?

We’re glad that our blog posts not only educate, but help us recruit! Since Elliott likes working on hard to solve problems, we’re pretty sure he’ll have a blast at Backblaze! We’ll make sure to keep the Mountain Dew stocked for you, and don’t worry about only watching TNG, that one was my favorite as well!