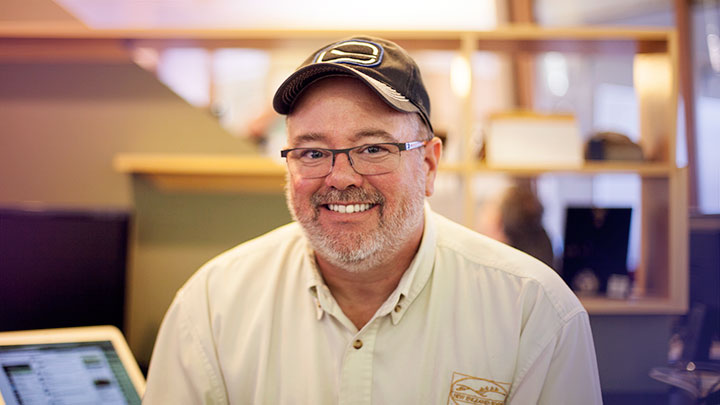 Some say that all things in life are cyclical. Backblaze pioneered DIY server architecture on a large scale with the Backblaze Storage Pods. This in turn spurred Facebook to start their Open Compute Project. This led to them having top-notch Datacenter teams. And now that leads to Chuck Goolsbee joining the Backblaze team after running a datacenter for Facebook in Oregon. What’s Chuck going to be working on? As Backblaze expands we need more places to store your data, and Chuck is tasked with building out our network of future datacenters. It’s not an easy task, but Chuck feels oddly intrigued by it. Lets learn a bit more about the newest addition to our Datacenter team, shall we?

What is your Backblaze Title?
Director of Datacenter Infrastructure

Where are you originally from?
Spent my childhood in Illinois, Montana, and Texas, but have lived most of my life in the Seattle area. Currently living in central Oregon.

What attracted you to Backblaze?
Backblaze needs datacenters. I live and breathe datacenters. Prior to coming here I was at Facebook for almost five years, starting up and managing their Prineville, Oregon datacenter. Prior to that I built and managed a series of colocation datacenters in the Seattle area for a company I helped create named digital.forest.

What do you expect to learn while being at Backblaze?
Move fast and build datacenters.

Where else have you worked?
See above. Most interesting job? I spent about 15 years as a professional, on-ice Hockey Official (Referee & Linesman) in the USA, Canada, and Europe. I was paid to travel and work games ranging from kids through College up to professional Ice Hockey. I started doing it in college for extra money (I played hockey at the time) and kept with it for years afterward. I tell people that no job better prepares you for on-you-feet decision-making, and staying cool in a crisis better than hockey officiating.

Where did you go to school?
I graduated from Texas Tech University with a BFA in Graphic & Package Design. I went there to study with a rather mercurial professor named Frank Cheatham. He was amazing, and brutal at the same time. About 90 of us started his program, and only four of us graduated. About a year after I started my professional design career, my whole world changed when the industry started going digital with the introduction of PostScript, Aldus PageMaker, Adobe Illustrator, et al. That changed everything, and began my journey to here.

What’s your dream job?
The guy whose perpetual subtitle reads “Professional on a closed course. DO NOT ATTEMPT.”

Favorite hobby?
Skiing all winter, playing with cars when there is no snow. I try to ski between 750,000 and 1 million vertical feet every winter (that’s 229km—305km for the more rational, non-Imperial types out there). In the off-season I compete in the 24 Hours of LeMons race series, and try to keep a few old cars running… with very limited success. (OK, mostly outright failure.)

Star Trek or Star Wars?
Why not both? (just no Jar Jar please!)

Why do you like certain things?
I generally like things that require my complete, 100% focus in the moment I am doing them. Skiing, driving, whatever. I learned this while playing hockey. I was a goaltender, so if you lose focus for even a nanosecond, you lose. Maintain focus, and you can do just about anything.

Anything else you’d like you’d like to tell us?
It’s never too late to have a happy childhood.

Driving race cars and inching towards 90 MPH on skis? Never too late to have a happy childhood is right! Thanks for sharing your backstory with us Chuck. If you’re curious about what Chuck will be working on…
https://www.youtube.com/watch?v=xtRQ-y9cKdM

Back To Our Future
Next Post: Natasha Joins Backblaze For Business