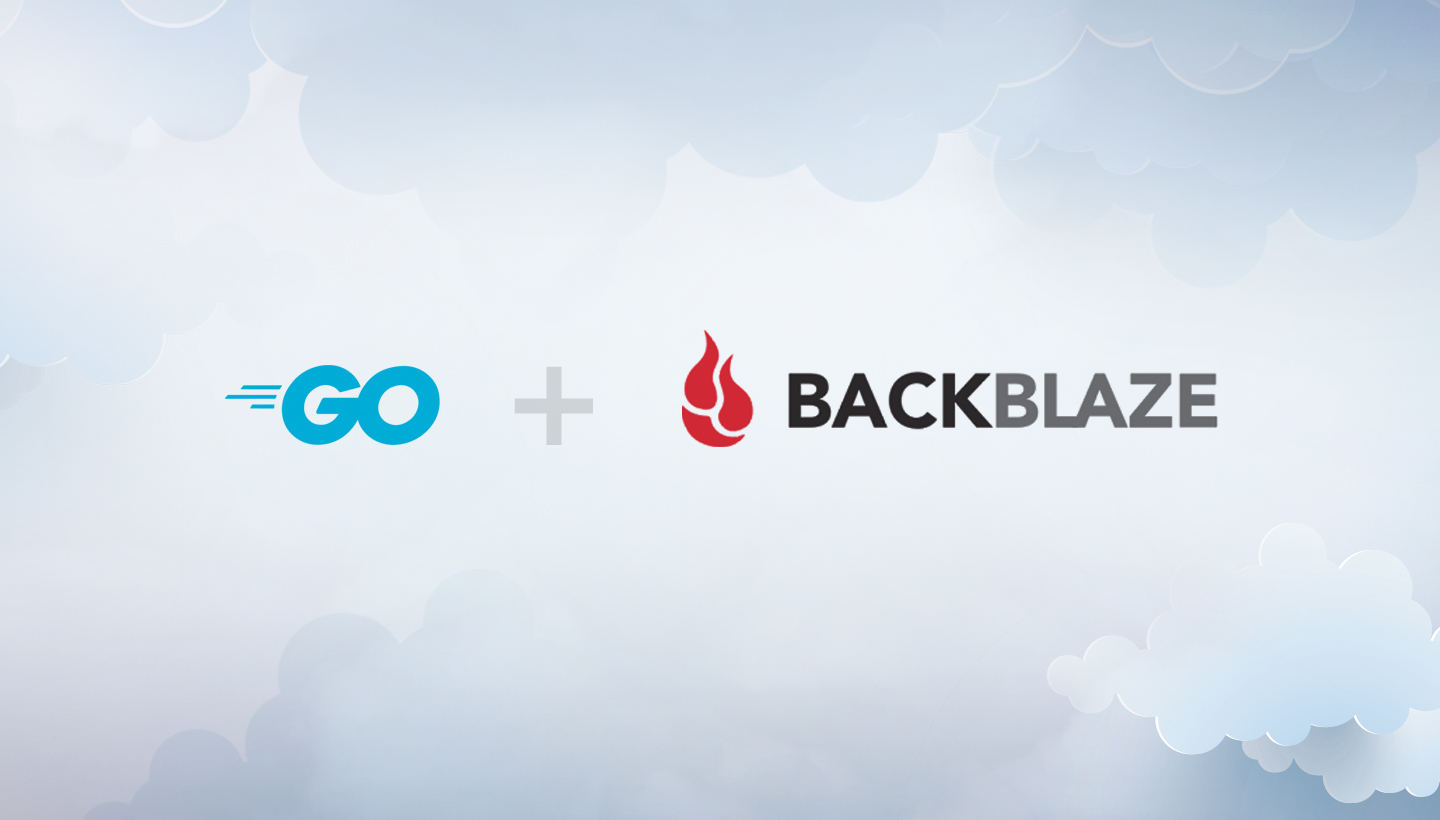 If you build apps, you’ve probably considered working in Go. After all, the open-source language has become more popular with developers every year since its introduction. With a reputation for simplicity in meeting modern programming needs, it’s no surprise that GitHub lists it as the 10th most popular coding language out there. Docker, Kubernetes, rclone—all developed in Go.

If you’re not using Go, this post will suggest a few reasons you might give it a shot in your next application, with a specific focus on another reason for its popularity: its ease of use in connecting to cloud storage—an increasingly important requirement as data storage and delivery becomes central to wide swaths of app development. With this in mind, the following content will also outline some basic and relatively straightforward steps to follow for building an app in Go and connecting it to cloud storage.

But first, if you’re not at all familiar with this programming language, here’s a little more background to get you started.

Go (sometimes referred to as Golang) is a modern coding language that can perform as well as low-level languages like C, yet is simpler to program and takes full advantage of modern processors. Similar to Python, it can meet many common programming needs and is extensible with a growing number of libraries. However, these advantages don’t mean it’s necessarily slower—in fact, applications written in Go compile to a binary that runs nearly as fast as programs written in C. It’s also designed to take advantage of multiple cores and concurrency routines, compiles to machine code, and is generally regarded as being faster than Java.

Why Use Go With Cloud Storage?

No matter how fast or efficient your app is, how it interacts with storage is crucial. Every app needs to store content on some level. And even if you keep some of the data your app needs closer to your CPU operations, or on other storage temporarily, it still benefits you to use economical, active storage.

Here are a few of the primary reasons why:

Generally speaking, active cloud storage is a key part of delivering ideal OpEx as your app scales. You’re able to ensure that as you grow, and your user or app data grows along with you, your need to invest in storage capacity won’t hamper your scale. You pay for exactly what you use as you use it.

Whether you buy the argument here, or you’re just curious, it’s easy and free to test out adding this power and performance to your next project. Follow along below for a simple approach to get you started, then tell us what you think.

How to Connect an App Written in Go With Cloud Storage

Once you have your Go environment set up, you’re ready to start building code in your main Gopath’s directory ($GOPATH). This example builds a Go app that connects to Backblaze B2 Cloud Storage using the AWS S3 SDK.

Next, create a bucket to store content in. You can create buckets programmatically in your app later, but for now, create a bucket in the Backblaze B2 web interface, and make note of the associated server endpoint.

Now, generate an application key for the tool, scope bucket access to the the new bucket only, and make sure that “Allow listing all bucket names” is selected: 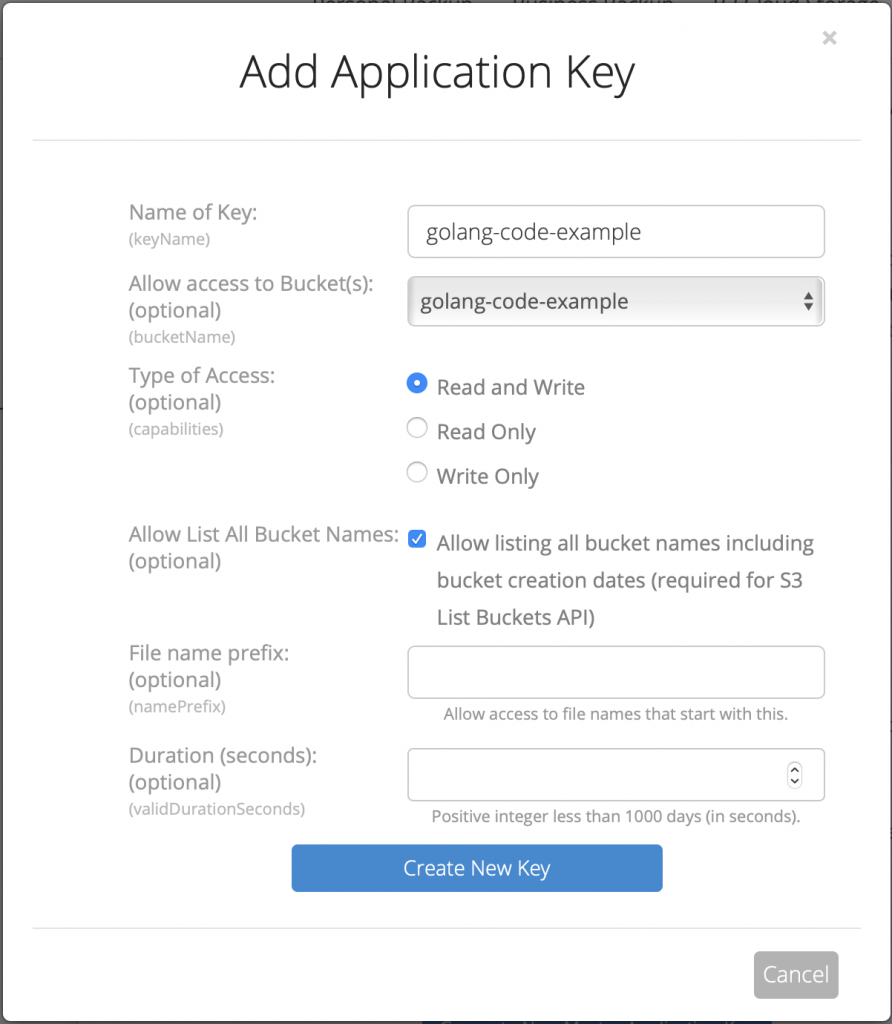 Make note of the bucket server connection and app key details. Use a Go module—for instance, this popular one, called godotenv—to make the configuration available to the app that will look in the app root for a .env (hidden) file.

Create the .env file in the app root with your credentials:

With configuration complete, build a package that connects to Backblaze B2 using the S3 API and S3 Go packages.

Then create a new client and session that uses those credentials: 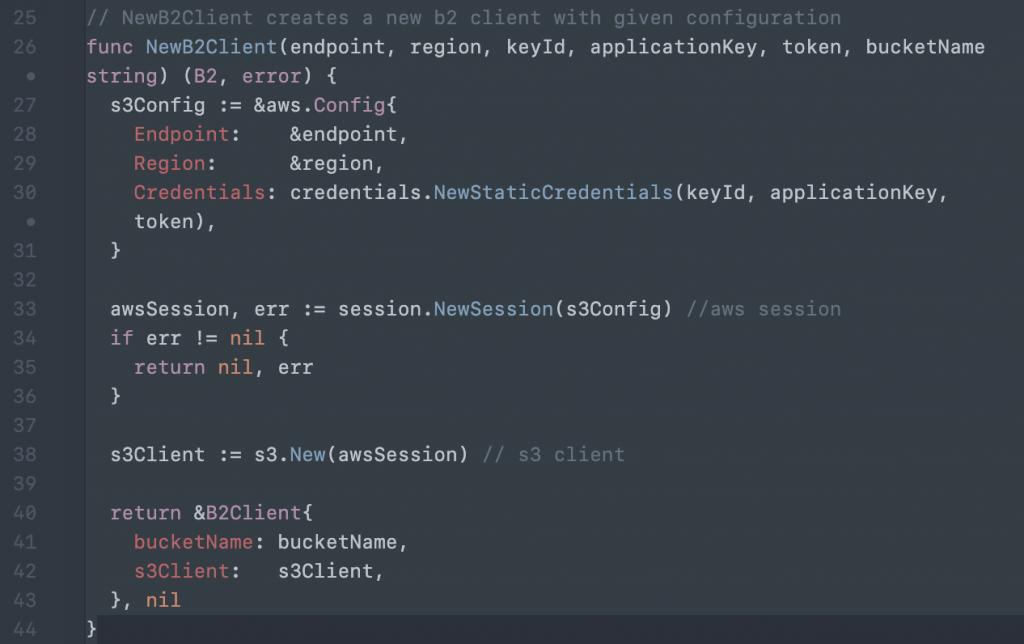 And then write functions to upload, download, and delete files: 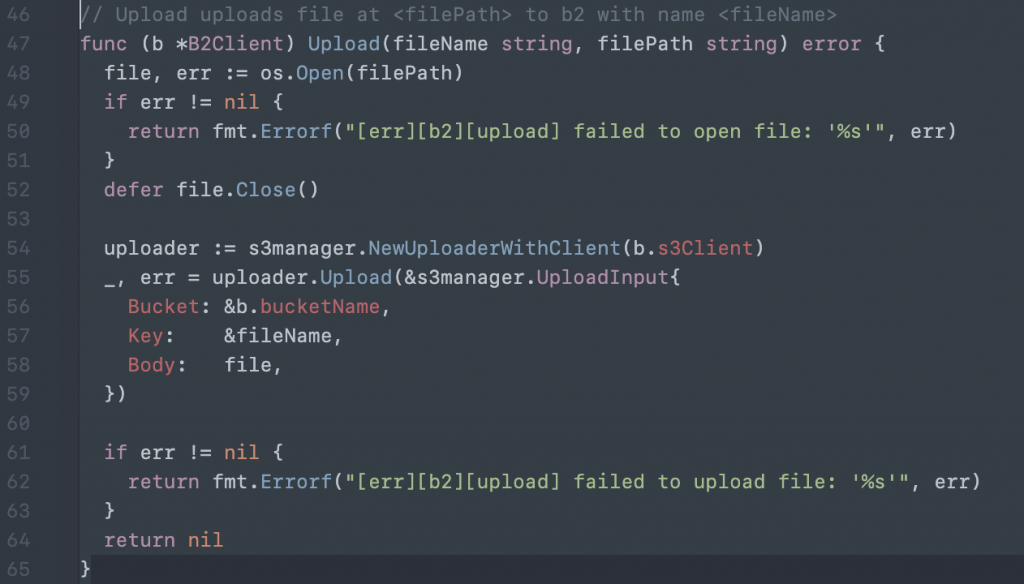 Now, put it all to work to make sure everything performs.

In the main test app, first import the modules, including godotenv and the functions you wrote:

Read in and reference your configuration:

And now, time to exercise those functions and see files upload and download.

For example, this extraordinarily compact chunk of code is all you need to list, upload, download, and delete objects to and from local folders: 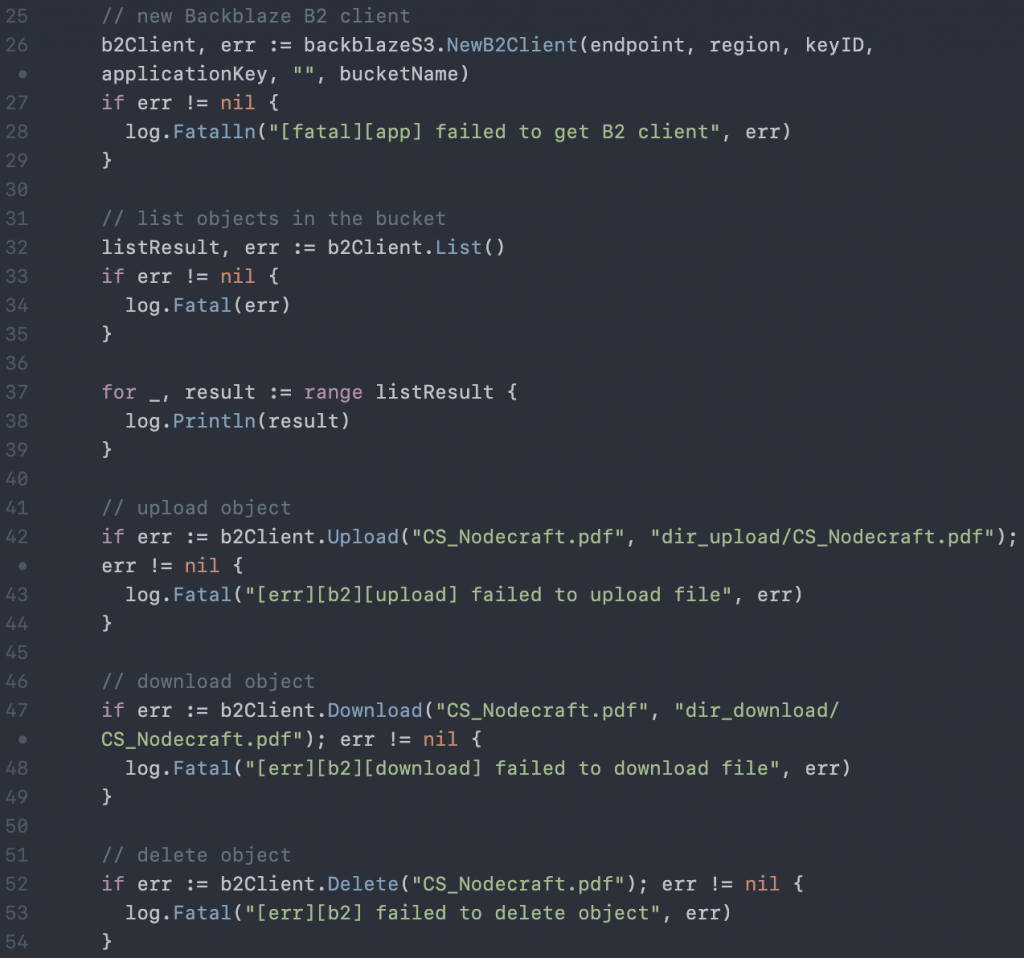 If you haven’t already, run go mod init to initialize the module dependencies, and run the app itself with go run backblaze_example_app.go.

Here, a listResult has been thrown in after each step with comments so that you can follow the progress as the app lists the number of objects in the bucket (in this case, zero), upload your specified file from the dir_upload folder, then download it back down again to dir_download:

Use another tool like rclone to list the bucket contents independently and verify the file was uploaded:

Or, of course, look in the Backblaze B2 web admin: 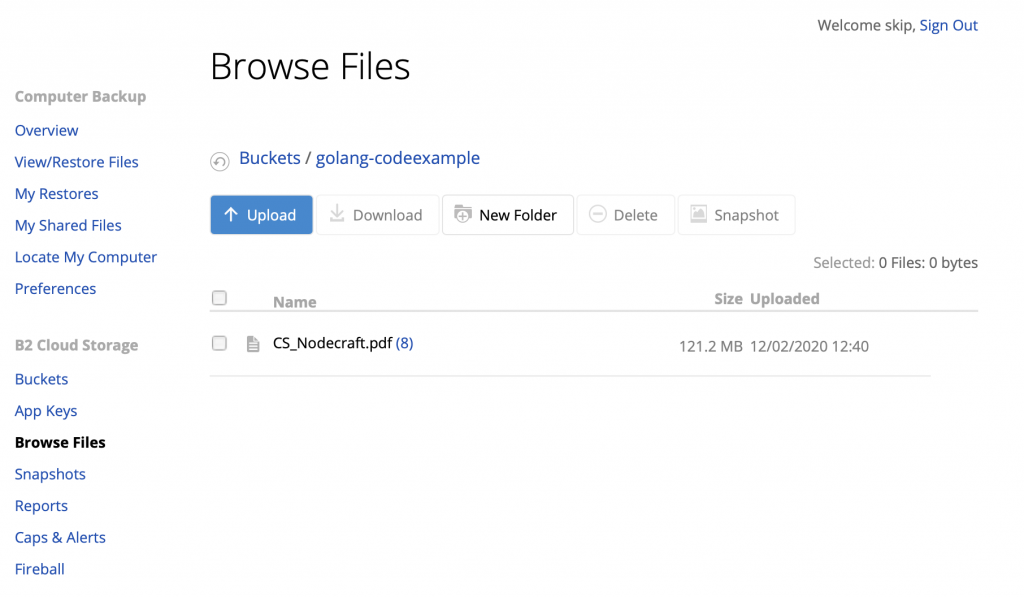 And finally, looking in the local system’s dir_download folder, see the file you downloaded: 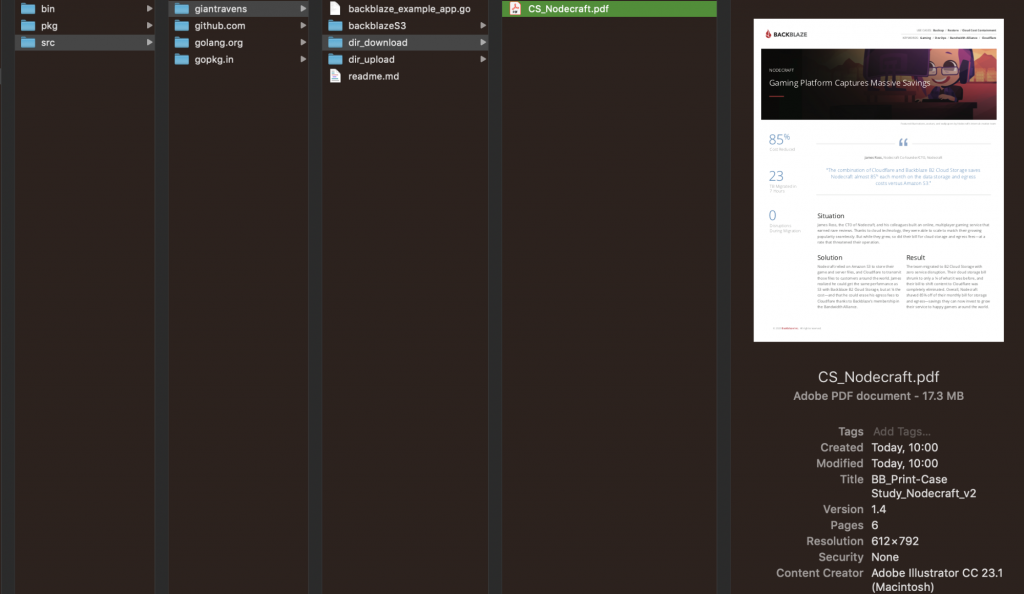 With that—and code at https://github.com/GiantRavens/backblazeS3—you have enough to explore further, connect to Backblaze B2 buckets with the S3 API, list objects, pass in file names to upload, and more.

Get Started With Go and Cloud Storage

With your app written in Go and connected to cloud storage, you’re able to grow at hyperscale. Happy hunting!

If you’ve already built an app with Go and have some feedback for us, we’d love to hear from you in the comments. And if it’s your first time writing in Go, let us know what you’d like to learn more about!