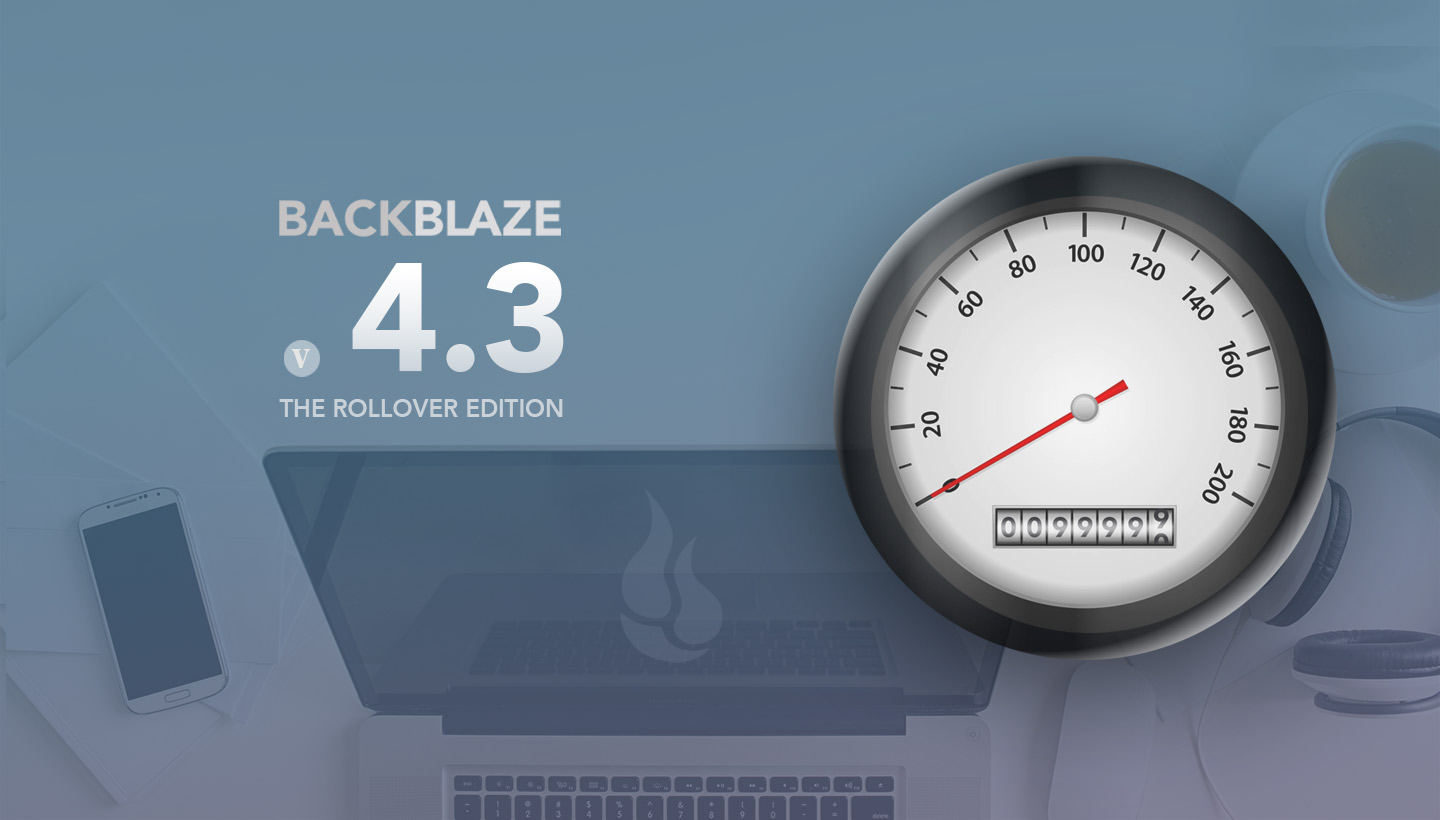 The current version of the Backblaze Computer Backup and Backblaze Business Backup applications is being updated to 4.3.0.1 on the PC and 4.3.0.2 on the Mac.

The list of fixes, changes, and updates is as follows:

If you are the curious type, you might have a question or two as to why we updated the version number and build number and nothing else. Here’s the story…

The tale begins over nine years ago as Brian, Damon, and others were crafting the code that would become Backblaze Computer Backup 1.0. In the furious development cycles that usually accompany a version 1.0 product, some decisions are made that will have to be reconsidered at a later time. That’s normal. So why does that matter? We’ll start by breaking down a version number, for example, 4.2.0.989. Each version number is divided into four separate parts:

Each of the four parts of the version number is something we decide; there is no concept of version number addition that underlies everything. For example, if we have a product version of 9.9.1.123 and we issue a minor release update, then the new release can be 9.10.1.123. We don’t have to “carry the one” to the left. We can also jump numbers, going from 4.2.0 to 5.0.0 all at once, for example. It all depends on what we think has changed in the product each time we announce the latest version.

Nine years ago, when Brian and Damon were building the first version of Backblaze, it was incomprehensible for them to think they would have to build another 999 versions, but here we are.

Building a thousand versions of anything seems ridiculous, but first consider that we have two platforms, Mac and PC, and they have different build numbers. PC build numbers are odd numbers and Mac build numbers are even. That makes it about 500 builds for each platform, although many of those builds are not made public. Why?

Let’s say the PC client development group is working on build 631. Each developer turns in their code, and build 631 is built. This is the first time all that code is together. While integration testing was done prior to the build, sometimes things don’t quite play nicely together once a build occurs, so it’s on to build 633, then 635, and so on. It could easily be build 661 that eventually gets published as a public release.

The Backblaze client software also integrates with our backend servers and our website. Different teams work on these systems and sometimes, even if the client code is perfect, it doesn’t mesh with the server code and something breaks. This usually entails a meeting or two to discuss the issue and sometimes a new client build is the answer.

So after nine plus years, we’ve used nearly 1,000 build numbers.

Using four digits may seem like the obvious answer, but nine years ago, the decision was made to use three digits for the build number. There is no fourth digit to use. There’s another thing to know. When you update from one version of the product to another, you can only go up in version numbers—not down. So going from 4.2.0.990 to 4.2.0.998 is OK, but going from 4.2.0.990 to 4.2.0.2 will not work. This seems logical, but it plays a part in the four digit dilemma, as we’ll see.

We could build, for example, version 995 with the four digit code changes and then get everyone to upgrade to build 995. That would be nirvana, but in practice it would create a ton of headaches. Why? Not everyone updates their copy of Backblaze to the latest version. Crazy, I know, but true. Even when we auto-update everyone, there are some laggards.

One reason for the laggards is anti-virus programs. We have a good relationship will all the major anti-virus vendors. We sign our binaries and follow all the rules for a good application. Still, there are some lesser-known anti-virus vendors that just don’t care. They won’t allow Backblaze to be updated at all or at the very least without extensive user intervention. If the user doesn’t take the actions needed, the Backblaze update is not installed. Whether it is because of an anti-virus block or some other reason, older versions of the Backblaze application are out there. That means if we produced the magical version 995 noted above, some customers would not update to it. Knowing that, if we did go to a four digit build number, those laggards would not be able to update to the latest version—ever.

Three Digits It Is

Why not just change the version from 4.2.0.990 to 4.2.1.2? We considered doing this, but thought the build number (the fourth part of the version number) rolling over would be noticed and we wanted to make sure people understood the change. We decided to treat this release like a minor product update and let marketing do their thing. We could have decided this was a major product update and pushed the version to 5.0.0.1, but we thought that was a bit over the top.

Cost: Free as an update for all active Backblaze customers and active trial users.

Version 4.3 can be installed and is supported on the following operating systems: