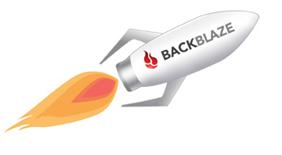 Wow. This was not your typical Monday.

The Backblaze online backup service has been in a very private beta since early February. Monday we made our beta a bit more public.

We showed Backblaze to top 10 blogs TechCrunch and Ars Technica, and great tutorial site SimpleHelp and gave them about 1,000 invites total to hand their users starting at 6 a.m. PST Monday morning. At 6:01 a.m., it got very exciting.

TechCrunch penned “Backblaze: Online Backup With Time Machine’s Finesse” and The Washington Post reprinted it; Ars Technica published a detailed hands-on piece titled “Making off-site Backups Brainless;” SimpleHelp wrote a review the next day. Traffic on our site shot up, installs were blazing, requests for a Mac version were ticking in twice a minute, hundreds of requests for beta invitations arrived from people who didn’t visit Backblaze through one of the these sites, the corporate phone rang non-stop with vendors calling to sell us drives and bandwidth, companies emailed asking about affiliate and OEM opportunities, and we even had a job request.

By late afternoon, thousands of people visited the site, all invites were used up, and we had to shut off the custom links, sending people to request a beta invitation for the next time we open a sneak peak. When I looked on Google later that evening, we were the #3 result for the search “online backup.”

Users signed up from all corners of the world, providing us feedback from as far as Australia, Argentina, Europe, and Japan. We received some adoring emails saying “I love this backup solution” and “I am testing out Backblaze and so far it was super easy to install and start backing up.” We also received lots of interesting feedback on what we could do better and we’re reading every email and working to get that feedback reflected in the service. We are scaling up our operations to fulfill more beta requests. (If you missed the sneak peak, get an invite at www.backblaze.com.)

I want to say a big thank you to TechCrunch, Ars Technica, and SimpleHelp for looking at Backblaze and helping us in our mission to make sure every user is backed up—and to all of you that installed our online backup service and have been providing us with invaluable feedback.

It was definitely not your typical Monday.