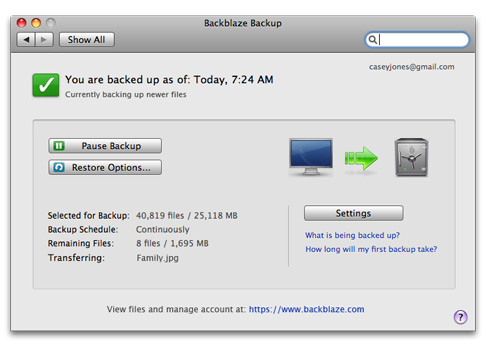 That may have been the most understated title for a blog post about a day like today.

This happened so quickly due to the team’s deep love for the Mac and continual commitment to cross-platform development. Every line of code for the backup engine always ran on the Mac and Windows ensuring the system’s robustness since all Backblaze customers worldwide already use it. The UI, on the other hand, was written natively to ensure that it was a true Mac product. Stay tuned for a post from our CTO about developing cross-platform code, but for now, more about today’s launch…

At 6 a.m. PST, the updated website appeared, Cara lit a laptop on fire, and the first reviews went public. Here are some that covered the launch:

I want to say a big thank you to the bloggers and journalists who helped us spread the word about the Mac online backup beta! Throughout the day we watched the comments on these sites, the Tweeting about Backblaze, and the feedback sent to us; it was great to see so many people passionate about backups.

As many of you found, we had such an overwhelming response that, unfortunately, we had to shut off access for new beta users pretty early in the day. I know several thousand of you did not get in and we are doing everything possible to enable everyone to access the beta. Please bear with us and if you submit an email request, we will contact you as soon as we have space available.

Again, a big thank you to everyone—we’re very excited to help you backup easily.

Backblaze Selected as “Best of the Best”
Next Post: Brian’s 10 Rules for How to Write Cross-Platform Code