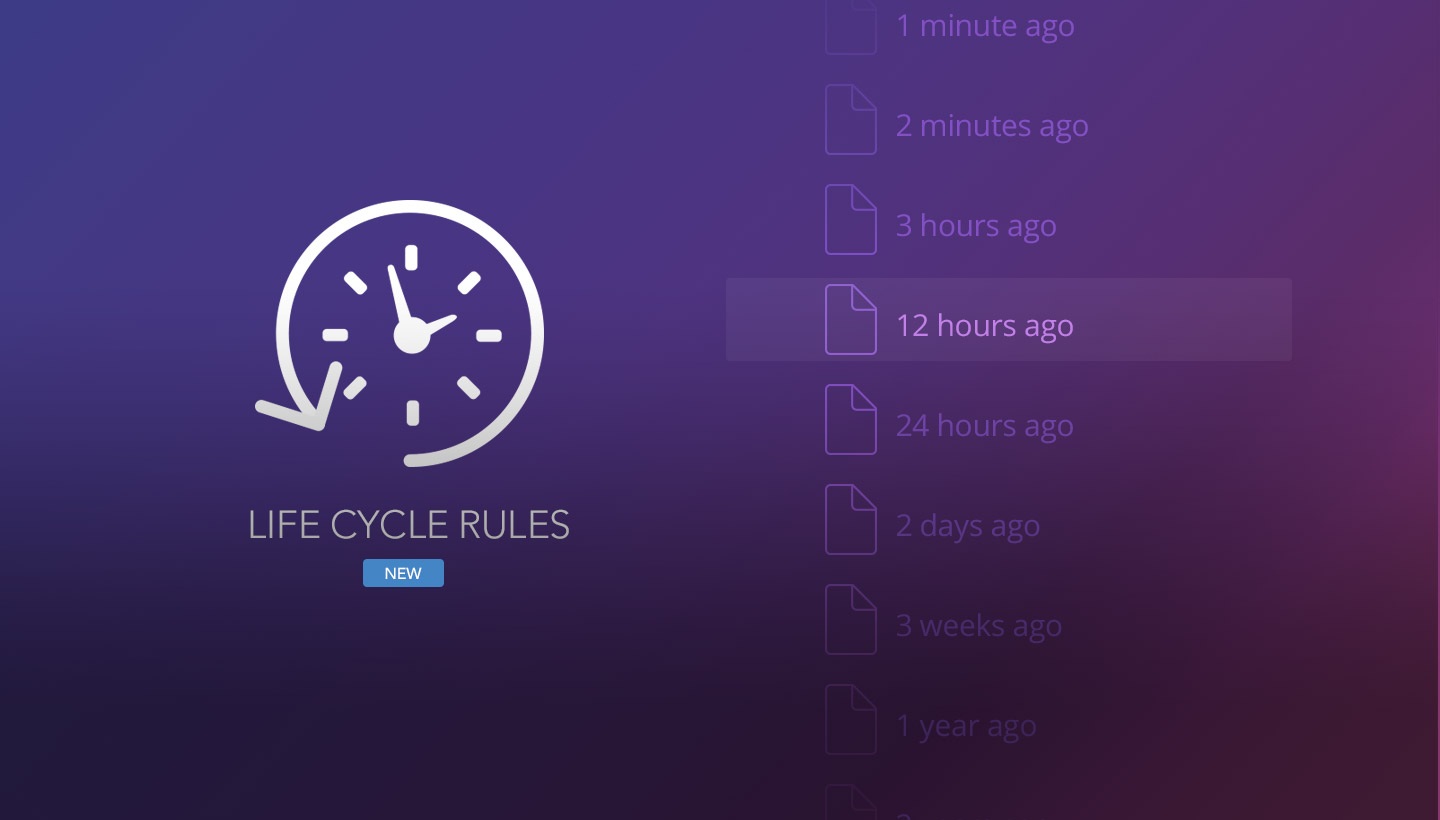 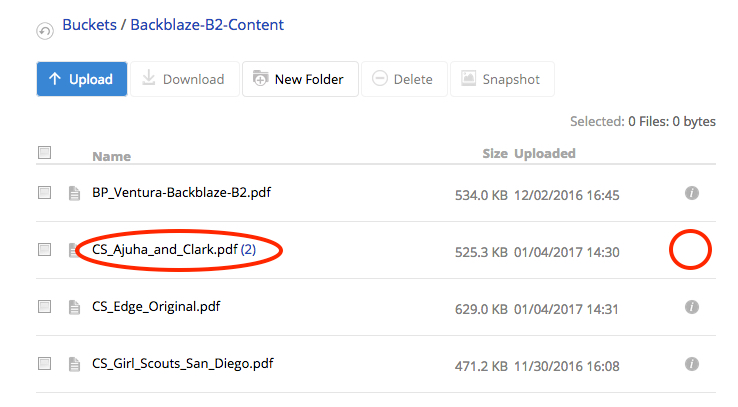 There are two indicators that we have multiple versions of the same file. First the file name has a “2” at the end. This is the file version count and in this case means there are two versions of the file. The date/time stamp shown is for the most recent version of the file. The second indicator is the “missing” file information icon on the right.

The older version, V2 in the example, is hidden. All versions of a given file are available to download, delete, or just keep around as desired. If the file names are different at all, they are stored as different files, so myfile-version1.doc is not the same as myfile-version2.doc, even if the content is identical.

There is no limit to the number of versions you can have of a given file. Also, by default, the length of time older versions stay in Backblaze B2 is forever, unless you delete them or you stop using the B2 Cloud Storage service.

Since all versions of a given file are kept around, you can use Lifecycle Rules to help manage the older versions. Let’s see how.

Lifecycle Rules and the Web GUI

The “Bucket Settings” pop up screen, similar to the one below will appear. 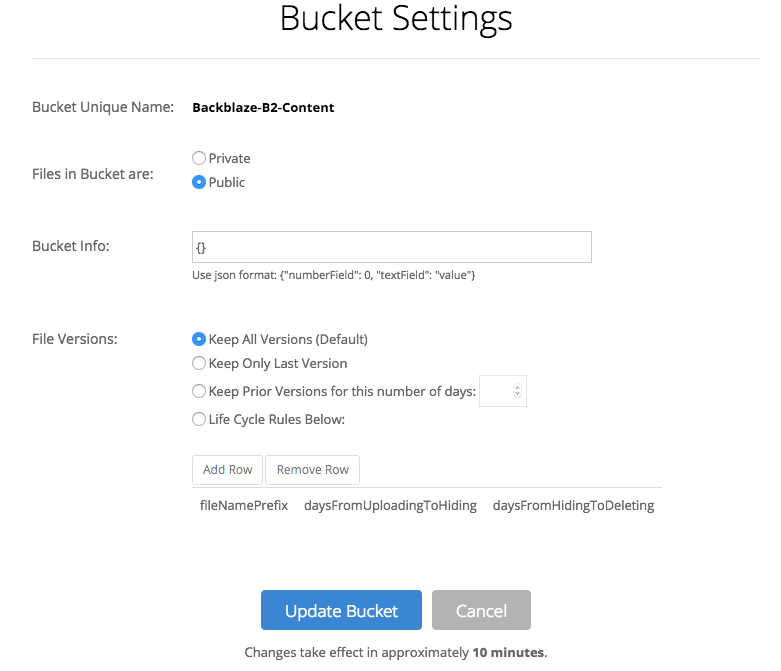 Previously, this screen just contained the settings for making a bucket public or private. The additional items are for managing Lifecycle Rules.

Let’s cover the more common ways to use Lifecycle Rules.

The File Versions rules apply to all the files in the bucket, unless otherwise specified. The four options for File Versions work as follows:

Most common situations can be handled using one of the first three options.

Constructing a Lifecycle Rule in the Web GUI

Before you start constructing Lifecycle Rules, here are a few things to know:

There are three variables you need to enter to construct a Lifecycle Rule. All three are required for each rule added.

Let’s assume that you back up your “log” files once a day to Backblaze B2 and that these files are stored in a directory/folder named log. Below are sample Lifecycle Rules you could set up to manage the log files in Backblaze B2 based on your data retention policies.

Result: The files in the log/ folder will be hidden seven days after they are uploaded to Backblaze B2. This means the current version, as well as any previous versions of every file in the log/ folder, will be hidden after seven days. The hidden files are still available for download using their specific file_id and continue to count as part of your Backblaze B2 storage amount.

Result: The files in the log/ folder will be hidden seven days after they are uploaded to Backblaze B2. After the files have been hidden for 30 days, they will be permanently deleted. Until they are deleted, the files are still available for download and count as part of your Backblaze B2 storage amount.

Result: The files in the log/ folder will be deleted 180 days after they have been either 1) explicitly hidden, or 2) been replaced by a file of the same name (i.e. they are an older version of the file—remember older file versions are automatically hidden). Until the files are deleted, all versions of a file are available for download and count as part of your Backblaze B2 storage amount.

Lifecycle Rules for the CLI and API

For the Backblaze B2 API, the following calls work with Lifecycle Rules:

Each API call has an optional parameter named “lifecycleRules” that requires the three variables noted above in the following JSON format:
{
"daysFromHidingToDeleting": 30,
"daysFromUploadingToHiding": null,
"fileNamePrefix": "backup/"
}

In addition, b2_delete_bucket will return the list of lifecycleRules for the bucket being deleted.

Backblaze B2 Integrations and Lifecycle Rules

Application developers are encouraged to look at Lifecycle Rules to use in their applications that integrate into B2 Cloud Storage. This is especially true for applications that perform sync or backup operations to B2 Cloud Storage. For example, the user interface of the application could allow the user/admin to specify the number of days older versions of files should be kept in support of data retention rules in an organization.

The b2 get-bucket command will return all the variables for the named bucket.

Lifecycle Rules are very handy in helping manage multiple versions of files you are storing in Backblaze B2. These rules can help save storage space by automatically deleting older, unneeded versions of files and can make the B2 Cloud Storage file list easier to navigate and manage. Since Lifecycle Rules will delete older file versions, one recommendation is to start with a large number of days for “daysFromHidingtoDeleteing” and reduce this number as you become comfortable with this feature. The easiest way to do this is to use the “Keep Prior Versions a Number of Days” option in the Web GUI.

[Editor’s note: Updated on 1/11/2016 with reference to file version documentation along with enhancing specifics regarding hidden files].
print