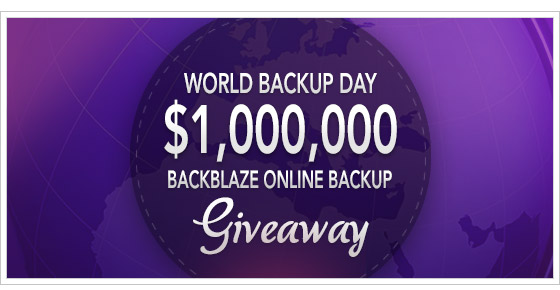 Starting immediately and running through the end of World Backup Day (March 31, 2013 11:59 p.m. PDT), Mac and PC users new to Backblaze can sign up to receive three months of the Backblaze Personal Backup service for free (a $15 value). To sign up, all you need to do is go to www.backblaze.com/worldbackupday and enter a valid email address during the promotional period. The first 66,667 unique and valid email accounts to sign up will receive an email containing their personal code, providing them with three months of unlimited online backup from Backblaze. That’s it. A new Backblaze customer can sign-up, get a code via email, and run Backblaze for free for three months.

“Okay, that’s cool, but what about us existing customers, are we being left out?”

Of course not. We have entered all of our existing customers into a contest. We will randomly select five lucky winners and each winner will receive an iPad Mini. We’ll select the winners on April 2nd and contact them via email at that time.

“Nice, but three free months of Backblaze is nearly as good as an iPad Mini. Any chance I can get the free Backblaze?”

So that’s it, one million dollars worth of the Backblaze service for free for new customers. Now there’s no excuse not to back it up with Backblaze.

Update: Thanks everyone for signing up! Codes are going out soon, and the iPad Mini winners will be notified on April 2nd, 2013 (so they don’t think it’s an April Fool’s joke)!

Incredible Invoices!
Next Post: The Real Story Behind Drive Farming