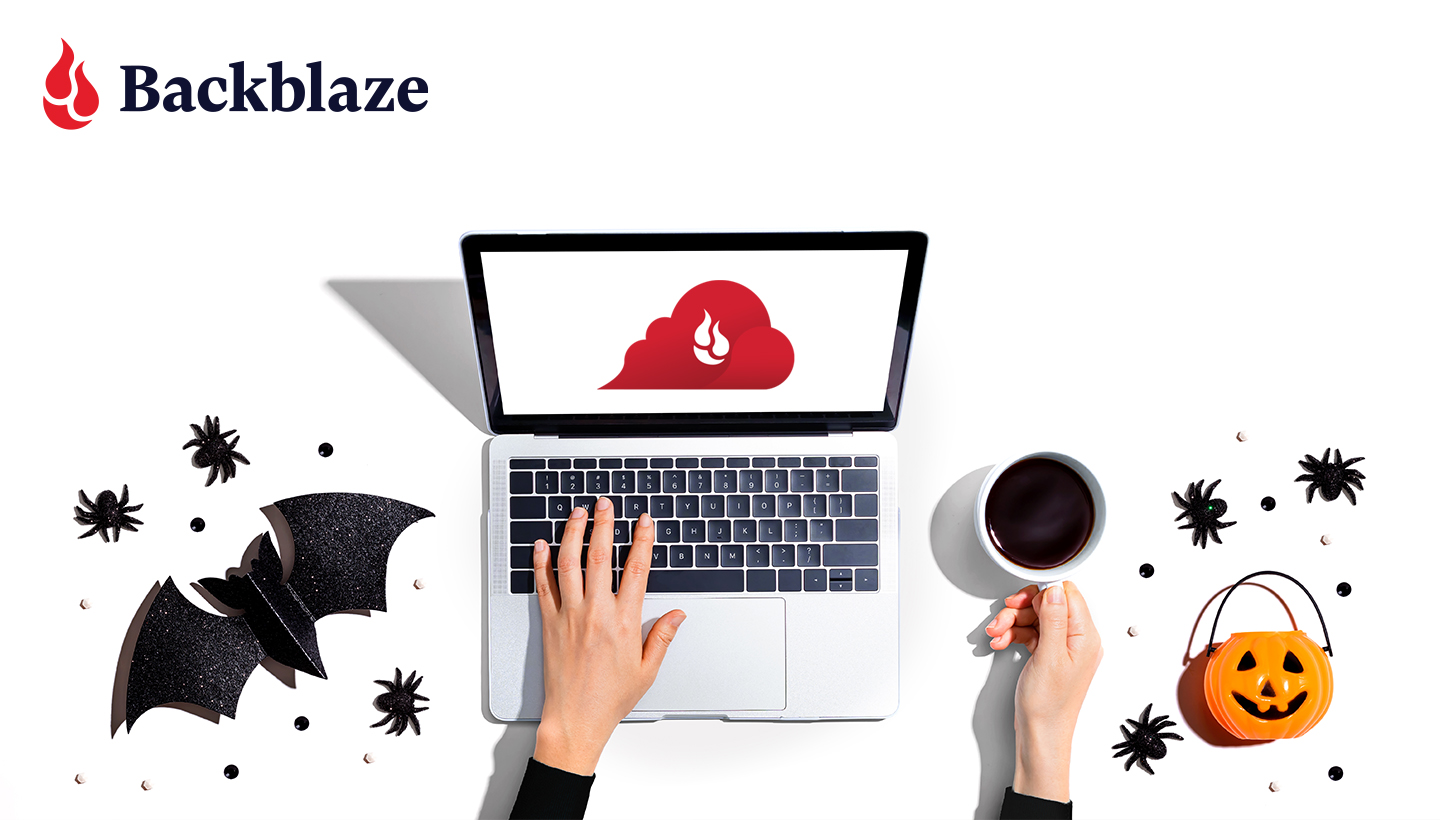 Halloween and its surrounding spooky season is my favorite time of the year. As the Computer Backup Steward at Backblaze, I often read people’s notes to us, which detail how we’ve helped them recover their files. As I was thinking about their experiences and our past Halloween blog posts detailing spooky data loss stories (Truly, what’s scarier than data loss?), I recalled a personal story that happened to my sister a few years ago when she was interning here at Backblaze. It reminded me that Backblaze Computer Backup doesn’t just recover people’s data, but we also help access it in times of need—which can be equally important. Like the Ghostbusters, when there’s something strange in your (data’s) neighborhood, who ya gonna call? …Backblaze, it’s Backblaze. So, on this, the Friday before Halloween, let me recount that tiny spooky tale for you today…

A long time ago, my sister Lisa was an intern with us here at Backblaze. It was just for a month, but she helped us build desks, digitized business cards (The horror!), and generally helped out around the office while getting a feel for working at a Silicon Valley tech startup. Like any good startup techie, after joining us for the summer, she started using Backblaze to back up her computer files, which makes sense because as a 19-year-old—a lot can happen to your computer.

My sister and I are really close, and we try to go on little trips together whenever possible. One of these opportunities arose in the form of a road trip from the San Francisco Bay to Los Angeles to see a comedy show. (For those curious, it was Kevin Smith and Ralph Garman recording their “Hollywood Babble-On” podcast.)

Driving down from the Bay Area to Los Angeles takes about five to six hours, sometimes longer depending on the traffic and where you’re headed. As we passed hour four, my sister turned to me and said, ”Hey, do I need my ID for this?” Cue: creepy forewarning music.

Now, this comedy show was held, oddly enough, in a comedy club (this sometimes happens when comedy is involved). An important thing to know about comedy clubs in general is that often they require people to be over 18, and are very serious about asking for ID so that underage people don’t imbibe, which makes sense—safety first.

So, yes. An ID was required, and yes she would need it, but no, she did not have it—nor her purse in general. Being an older brother is like that sometimes. I wasn’t about to turn around and drive back to San Francisco—partly because we had the show to go to that night, but also because I would get a bit of enjoyment from her having to sit outside while I enjoyed some comedy as a “lesson.” A sinister brotherly thought.

Luckily, I remembered that a few months back, my sister had to scan her passport as a PDF so that we could have a digital copy on another trip. I called up the comedy club and asked if they’d take a digital ID if we didn’t have a physical one, and while they were confused, they did say yes, so long as it was official. Good news! Once we arrived at the hotel, she logged on to Backblaze, found her backed up passport PDF, and we printed it out in the lobby. And we made it to the show on time. Happily ever after!

OK, so maybe it wasn’t really a horror story and the prospect of not making it to a comedy show may not seem scary to some people, but our family dynamic would mean that if she wasn’t able to attend and had to sit outside, she’d never have lived it down—low stakes slightly spooky (the best kind).

How to Connect Your Synology NAS to Backblaze B2 Cloud Storage
Next Post: Backblaze Drive Stats for Q3 2021