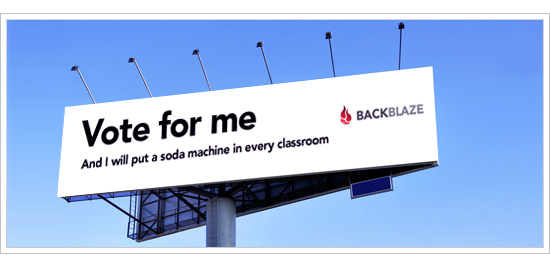 We asked you to provide us ideas for a billboard and, wow, did you come through! You submitted about 200 ideas!

It was incredibly difficult to narrow them down. But, after much deliberation, rigorous analysis, careful evaluation…and just some plain “I like that one!” we came down to the six ideas below.

Now, it’s time to pick the final billboard that will go up on Highway 101:
Vote on Facebook for your favorite Backblaze online backup billboard! Voting by December 5, 2011 at 10 a.m. PST enters you to win one year of Backblaze.

Yesterday, you said you would backup today.

Because there are some videos you don’t want to lose.

Easy backup. Quick restore. You can hug us later.

One in two people will lose data. Which one are you?

So, which one is your favorite?

We will also be touching up the final picked one, so give us feedback in the comments.

Give Friends Peace of Mind for the Holidays—and Get a Hotel Night or Free Flight
Next Post: And the Winner Is… Kiss Your Lost Files Hello