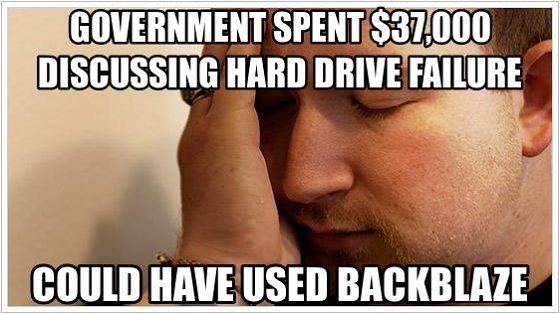 In 2011, Lois Lerner’s hard drive crashed and took some emails with it. Unfortunately for Lerner, she happened to be working as the Director of the IRS’ Exempt Organizations Division. Now there’s a congressional inquiry in to the IRS and at the heart of that investigation is that very same broken hard drive. Bloomberg writes:

The device in question belonged to Lois Lerner, the former IRS official accused by Republicans of giving extra scrutiny to small-government groups seeking tax-exempt status. The IRS says a catastrophic failure—the crash of her computer hard drive followed by the recycling of backup tapes—means two years’ worth of her e-mails were wiped out.

At this point both the House Ways and Means Committee and the Congressional Oversight Committee have discussed and heard about this hard drive failure. We did a bit of fun math, assuming that every single member of each of the committees was present, and that the hearings last for one day:

We’re not afraid of poking the government a bit (see our NSA blog post), but for the amount of money spent talking about a broken hard drive, all 79 members of the the House Ways and Means Committee and the Congressional Oversight Committee could have had Backblaze for 9.5 years. And we’ve restored over 6,000,000,000 files, so we’re pretty confident we could get their data back, too.

We’ve just been sent an article from the Wall Street Journal, which states:

In a statement, the IRS said that it has made “unprecedented efforts” to comply with congressional demands for documents and information concerning the targeting. The effort has involved more than 250 IRS employees working more than 120,000 hours at a cost of almost $10 million.