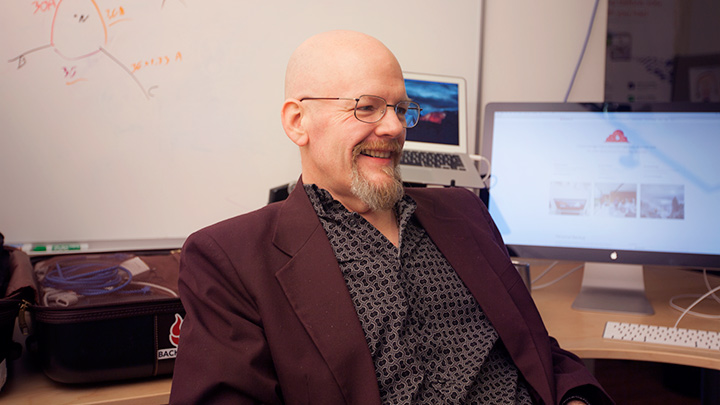 The latest addition to the Backblaze team is Peter Cohen! You might have heard that name before, but we’ll let him get to that. Over the last few years, the Backblaze blog has been pretty active. Well, most of that has fallen on the shoulders of one man, Andy. We brought in Peter to lend a hand with the tech writing, our resource center, and also with some industry-related topics that we might have an interesting take on. With that said, let’s learn a bit more about Peter, shall we?

What is your Backblaze title?

Where are you originally from?

What attracted you to Backblaze?

I’ve been writing about Backblaze for years, and I’ve recommended it to my consulting clients too. So when the opportunity to write guides and blog posts for Backblaze presented itself, I jumped at the chance.

What do you expect to learn while being at Backblaze?

I’m really interested in learning a lot more about how Backblaze works, partly so I can help explain it to our customers.

Where else have you worked?

I was an editor at Macworld magazine for ten years. After that, I was executive editor for a website called The Loop (loopinsight.com). For the past couple of years, I’ve been writing Mac-related content for iMore.com. I’ve also done freelance writing for Tom’s Guide, MacFormat, MacLife and a bunch of other websites and magazines. I’ve even worked the retail end of the Apple experience, selling and servicing Macs and iPads at a local Apple authorized reseller.

Mac, Mac, Mac. Apple. Mac. Yeah, I’m a Mac guy through and through. But I use Windows and other platforms, too. I love Apple products, but I’m not one of those guys.

This one! I pretty much have to pinch myself every day I get to wake up and write for a living.

Iceland. Its natural beauty is almost unbelievable, and Reykjavík is a really cool city. Stay away from hákarl though. I’m convinced Icelanders don’t actually eat fermented shark but just serve it to foreigners as some sort of cruel practical joke. My only regret was that I was there on business so I couldn’t bring my family. Next time, though…

My wife and I love anime. We go to cons whenever we can, cosplay (most recently I’ve done Walter White from “Breaking Bad”) and have raised another generation of anime fans too! I grew up loving Leiji Matsumoto (“Space Battleship Yamato” and “Space Pirate Captain Harlock”). I also love Godzilla and kaiju (giant monster) stuff. Especially Showa-era movies like the original Godzilla.

Of what achievement are you most proud?

My family is my number one achievement.

I’ll usually like them if they’re flavored with bacon.

Well, we’ll certainly have some Dr. Pepper available for you, as he’s our favorite doctor. It’s hard to stock bacon, but we’ll definitely give it the ‘ol college try. Welcome aboard!